I originally posted this blog entry on another, now defunct, blog so I thought I’d repost it here

Where we live is in a strange place when it comes to dark skies – the north and east of the village suffer from a lot of light pollution from places like Crook, Consett, Durham and even Newcastle but the south and the west are relatively dark – and so they should be given that they look inland towards the more sparsely inhabited areas in the North Pennines. The upshot of this is if you venture away from the street lights in the village you get some wonderful views of the stars in the night sky.

In fact if I’m honest you don’t have to go that far, the Dark Sky Discovery site classifies two types of site to view the night sky – firstly there’s a Milky Way site where the Milky Way is visible to the naked eye and then there is a Orion Site where the seven main stars in the winter constellation Orion are visible to the naked eye which puts my back garden into the latter category. Then there is the Thornley Road (before that idiot put those super bright spot lights outside his unit), at the bottom of Ironworks Road and behind the cemetery where the Milky Way can be seen on a really dark night and both of those are within walking distance. We’ve also got Derwent Reservoir and Parkhead Station within a twenty minute drive that are both recognised by the North Pennines AONB as being dark sky discovery sites.

Of course over 100 years ago, when the skies would have been much darker, there was an observatory in the village. A local clergyman built one in the garden of the rectory. The Rev Espin, who also dabbled with medical use of x-rays, was a well renowned astronomer and even has a crater on the dark side of the moon named after him!

So the other night when I discovered that the sky was really clear I set out to discover for myself if the skies were dark enough for astrophotography. I would have driven to a dark sky discovery spot but by the time I discovered the sky was so clear I’d had a couple of glasses of wine so it wasn’t a good idea! I has also seen on Facebook that the moon was due to set at around ten to one so I figured I’d go out just before that and see what it was like.

I decided that I would head up to behind the cemetery so I got my camera out and refreshed my memory by looking at the cheat sheet I’d got from Kielder observatory earlier in the year and set my camera up ready to save me fiddling around in the dark. I took my tripod and headed off through the quiet streets to the edge of the village and then turned down a lane that runs down to the old railway track. As I did the moon was hanging low in the sky and I decided to see if I could get a picture of it. I started to set up but that was then I discovered that in future I need to remember that as well as setting my camera up before leaving I should also familiarise myself with the tripod, at least until I get used to it as this is only the third time I’ve actually used it and remembering the ins and outs in the dark wasn’t a great idea. 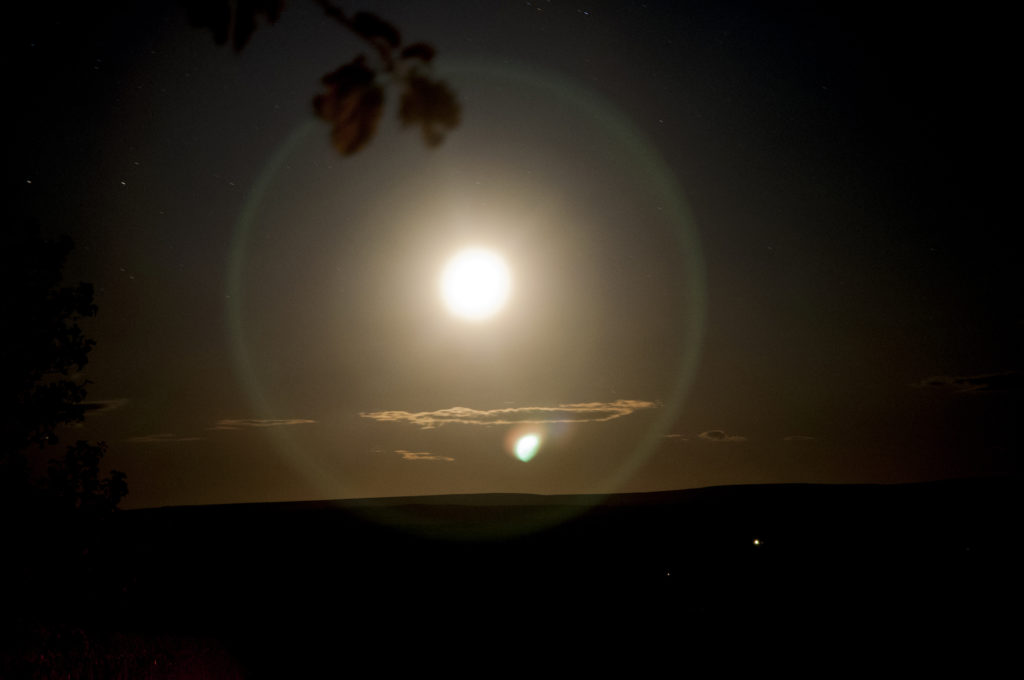 After a while and not getting any satisfactory shots of the moon (need to work that out obviously!) I moved on and continued to the end of the track where it meets with the old railway track which runs pretty much north -south being the line that used to run towards Consett. I moved into a position that meant I had the lights of the street behind me and where I was facing where I assume the Milky Way to be. I set my camera up and started to take a few shots. After 3 or 4 I realised that I had zoomed in to take the shots of the moon and once I’d gone back to the widest setting I could see a lot more of the sky!

I started to take various shots using various settings but decided that the light from the moon was too bright so it might be best to wait until the moon had set before trying again. At that point I turned around and I saw that the Plough was sitting directly above one of my favourite trees in the area so I swung my camera around and tried to capture the shout.

I did a 20 second exposure and when the image popped up on the screen I could see that I had an issue with light pollution – firstly in the bottom left where the street light on the A68 was causing a huge orange glow but also from the general north and east spill of light from our village and the surround area which was showing bottom right. Still the Plough had come out well and I wondered if I could move to get a better angle. I tried to take another shot and as I did nothing happened – I realised that the battery was dead and put my hand in my pocket for the spare only to realise that it was still sitting on the windowsill as I’d forgotten to pick it up!

I had no choice but to head back cursing myself for forgetting it and then cursing the nettles I walked into in the dark! Still it had been an experience and I had learned a few things for next time. It was quite eerie round the back of the cemetery especially when I could hear an angry horse in the field in front of me as I was leaving!

Still when I got home and processed the images I was quite pleased with this one – despite the light from a very bright moon!