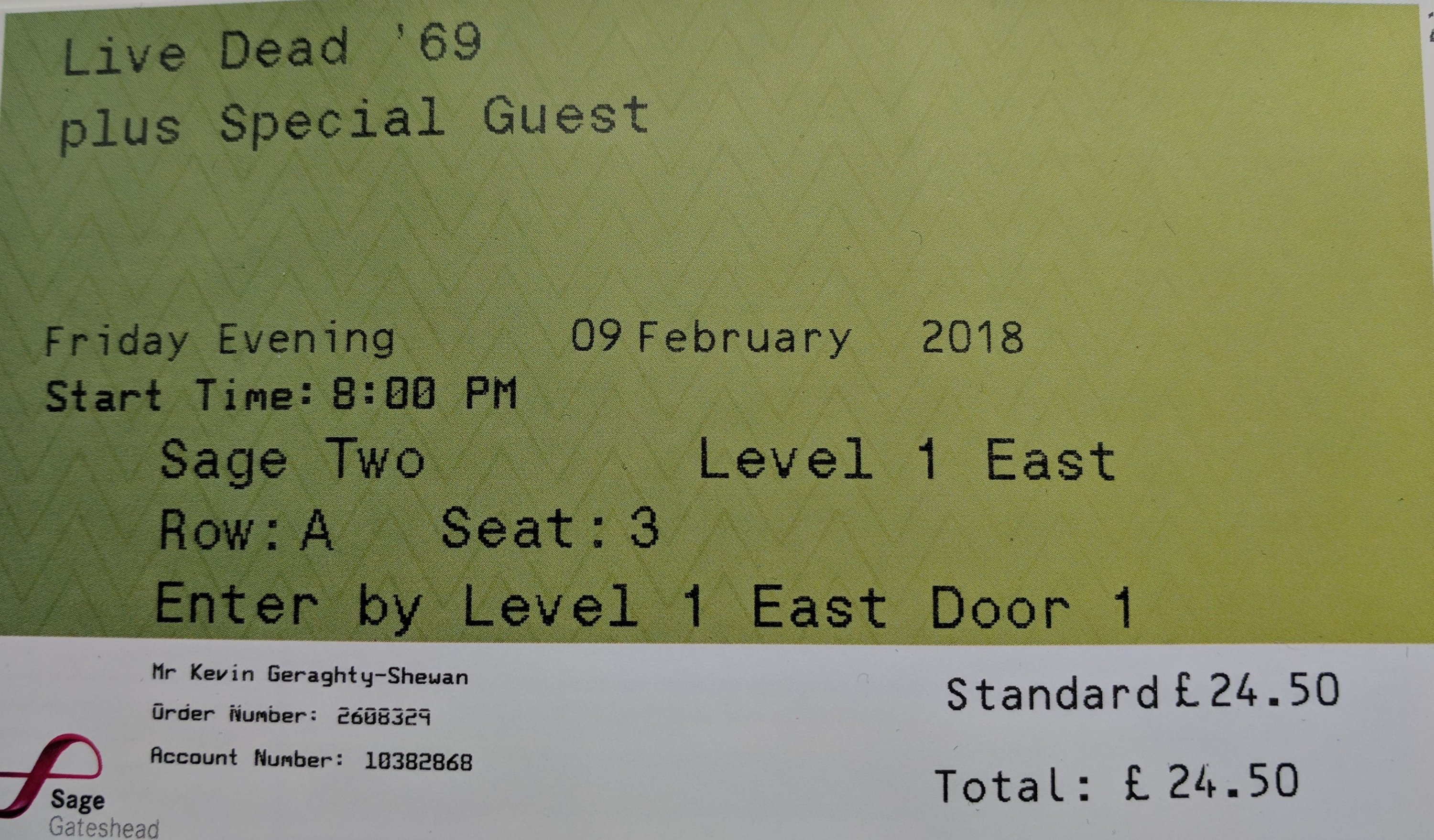 Tonight I went to see Live Dead 69 at the Sage in Gateshead, they toured last year but the nearest gig to me was around 120 miles away so I didn’t get to go. I thought it was going to be the same this time but I discovered a few weeks ago that they were playing at the Sage so I went on line and found they still had 3 tickets left in the front row (they’d sold further back but there were still 3 left in the front) so I bought one. It was only afterwards that I thought that I should have checked to see who stood where in the band before I chose the one I did but having said that there was one single and a pair so I probably would have bought the one I did anyway!

Live Dead 69 are essentially a Grateful Dead cover band but they do have the advantage of counting among their number Tom Constanten who played keyboards with the Dead between 1968 and 1970 and played on the seminal 1969 live album Live Dead after which, of course, the band is named! The other reason I wanted to see them was that the guitarist was Mark Karan who I’d see several times when he toured with Bob Weir’s Ratdog around 14/15 years ago.

I will confess that after I bought the tickets I did have some doubts, the band started web casting their shows in London, Bilston etc and I wasn’t that impressed with the few bits I watched just as I hadn’t been that impressed with a recording I’d heard of one of last years shows but the sound wasn’t that great on the one’s I’d seen and anyway it did mean I would finally get to see TC on about the third attempt! To add to my unease my good friend CJ had gone along to the show at York a couple of nights ago, arriving at the venue at the time stated on the ticket only to find that he’d missed the band’s first set.

After all the worry I did manage to get home, have something to eat and then head back to Gateshead and get to the venue in time to have a pint before the support band came on! It was strange because, without sounding like I’m blowing my own trumpet, it’s the first time I’ve been to a Dead related gig without bumping into lots of people I know or having people come up to me to talk about SoL! I also felt quite young tonight especially as I overheard several conversations about seeing the Dead at the City Hall in 72 (I was 10!). I’m still not sure about the Sage as a venue though! The foyer is so lifeless and the beer is so expensive! I’d got permission from the band to bring my Nikon which I had in my bag but there was this steward sitting at the end of my aisle who just looked like he was waiting to pounce and I didn’t want a scene so I never used it, all the photos here were taken with my Google Pixel! 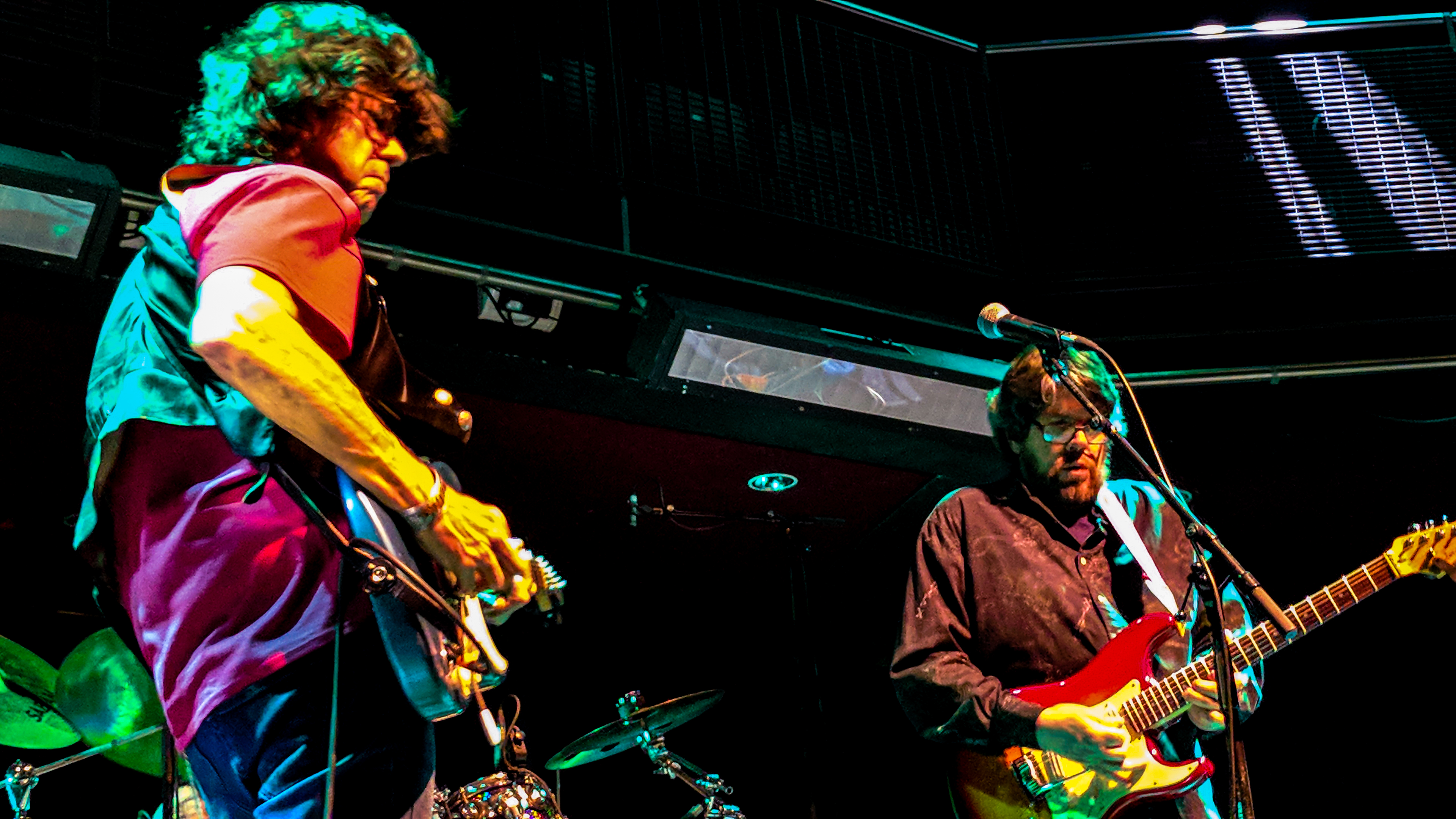 In the end I have to confess to being very impressed by the band. The support band only had twenty minutes and then after they cleared their stuff Ton Constanten came on and played Mountains of the Moon on the keyboards. As the song drew to a close the rest of the band joined him and I was really hoping they’d go straight into Dark Star as that’s how Live Dead opens with the opening riff coming out of the dying notes of Mountains but sadly not they kicked into Cold Rain and Snow. The band had said they were going to play two live albums in their entirety – Live Dead and the album known as Skull and Roses. The first few songs were off the latter but then they kicked into Dark Star and played the whole of Live Dead through to the break.

There seemed to be some confusion about the last song before the break as some of the band looked as though they were finished but Mark went into Death don’t have no mercy. They finished the first set much later than was advertised on the signs outside and as the set finished a guy who I think was the tour manager appeared on stage and had some words to say to Mark in particular! I headed out to the loo and then to the bar to grab another drink. They let you take drinks back in if you are on Level 1 so that’s what I did to be ready for the second set.

The second set consisted of tracks that came from the Skull and Roses album kicking off with Not Fade Away (I was expecting Bertha as that was what I’d heard they started the second set with but that came next!) My highlight of the second set was The Other One but like a lot of the show it could have benefitted from being stretched out a bit further. I got the impression that they tried to fit too much into the show and were up against a tight curfew which may have explained the disagreement at the end of set one and the fact that the show seemed to end suddenly after Wharf Rat with an apologetic look from the band at 10:30 on the dot! I did wonder if the venue had threatened them with an over run fee which could have impacted on the economics of the tour which I know some of my friends had questioned!

The audience rose to it’s feet for the first time – that was another thing I didn’t like about the venue was that the seats were in. Last time I was in Sage 2 it was standing and I would have enjoyed that much more tonight, it’s difficult to dance sitting down! I could see the band were all standing in the doorway behind the drums and after a short while they came back on. Clearly they were struggling with the curfew so the encore was an accapella version of And we bid you goodnight which the Dead used to finish their shows with in the late 60s. I wasn’t complaining – the guy next to me, who bore a striking resemblance to the aforementioned CJ predicted Johnny B Goode but frankly I preferred what we got. I remained stood up for the short encore.

I thought the band were good although I had reservations about the drummer who was a little heavy handed at times. In fact I would like to see the band with Jay Lane drumming and Robin Sylvester on bass (but then they’d almost be Ratdog!) I did also wonder if there was some tension between Mark and Slick Aguilar at some points during the show! As I said I really enjoyed it and my seat turned out to be spot on – it was right in front of Mark and had a great view of TC on the keys!

And we Bid You Goodnight 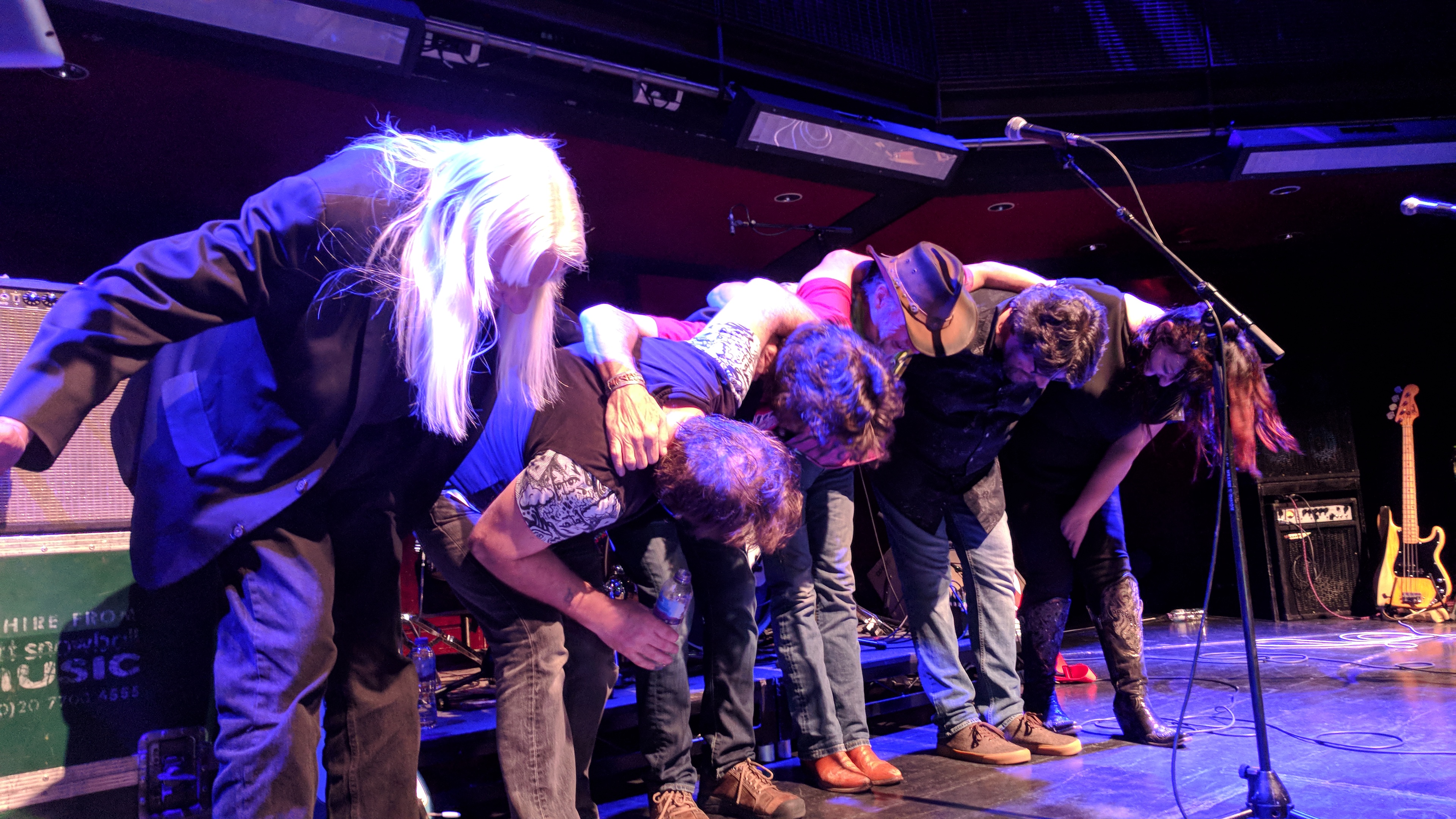