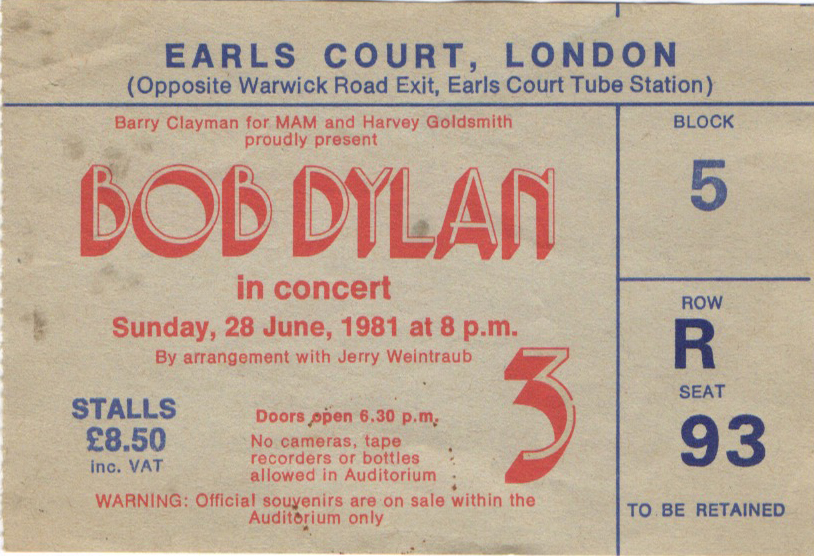 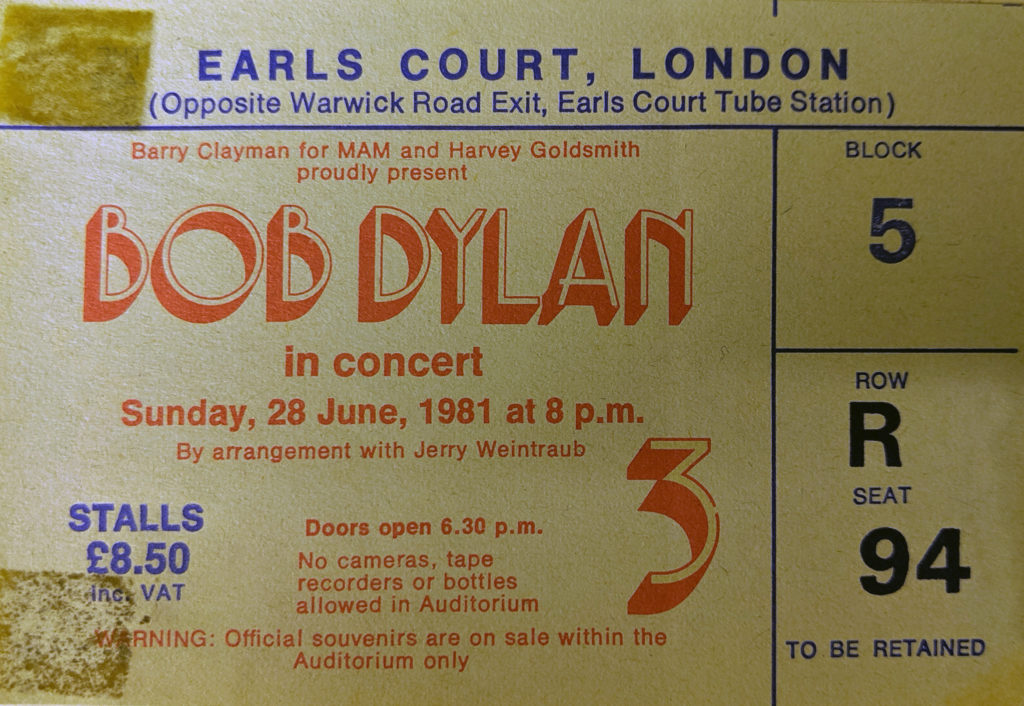 I’d seen Dylan at Blackbushe in 1978 on his Street Legal tour and since then of course he has found God! Or more particularly he had found Christianity – the next album after Street Legal was Slow Train Coming which came out in 1979 at about the time I was in the South East seeing the Who at Wembley then Rick Wakeman at the Venue in Victoria and then heading off to Reading Festival for the weekend. I remember on our way back we had to hang around London for ages on the Bank Holiday Monday and I saw the record in a shop window just round the corner from Victoria station! I stood and stared at it for ages studying the album cover for a clue and hoping some idea of what the music was going to be like would ooze through the pane of glass into my ears!

In the end the album was quite listenable – it had Mark Knopfler and Pick Withers from Dire Straits playing on it – the lyrics, although filled with Christian themes were still recognisable as being Dylan’s work. Looking back it is the most accessable of the three Born Again albums that Dylan made in the late 70s and early 80s and the only one I would regularly listen to! Saved followed in early 1980 and by the time we saw him at Earls Court he had just recorded Shot of Love but that wouldn’t be released until after the tour. 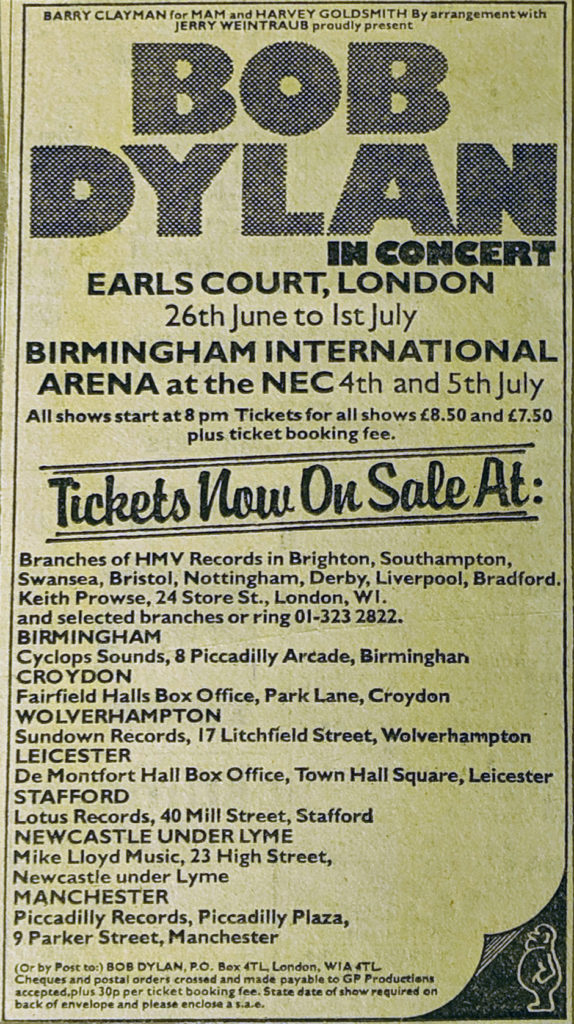 Then there were the reports of gigs in America where Dylan just didn’t play any of his songs at all – the set was made up of his new songs and gospel tunes. Thankfully by the time he came to England he was back with some of his older songs in the set but he did have a did at the audience when he said…

This is a new song off a forthcoming record album. I hope it’s on the album anyway. It’s called Dead Man, Dead Man When Will You Arise. I wrote quite a few new songs I thought I’d play them because I don’t know how much longer I’ll be playing new songs. People wanna hear the old songs. I was thinking of cutting out all the new songs. So I can play, I’m gonna play just older stuff. This time here in London I’m gonna play all the new songs so in case they never get heard again. Dead Man, Dead Man When Will You Arise.

I seem to recall that he got a huge cheer after he said that but I don’t know if that was because people wanted him to play his new songs or if people were glad he was going to drop them! 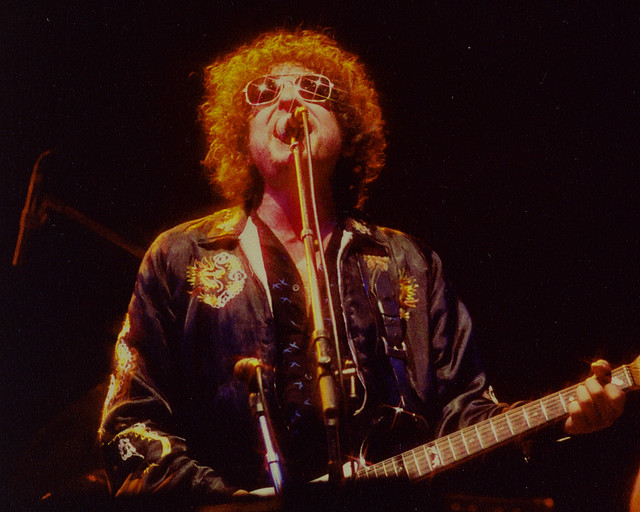 Obviously to get to see him we had to travel all the way down from Sunderland to London. We stayed, as we often did, with my cousin in Kings Cross and on the day of the gig they were going out for the day because the company my cousin worked for was holding a family fun day at Knebworth. We went along with them and they dropped us back at Earls Court for the gig. As we were getting closer to the venue my cousin’s other half’s car started to over heat and it made the most curious noise you’ve ever heard! Eventually after having to pull over a couple of times I think we just got out and walked the rest of the way!

Earls Court was an awful venue – we only went to two gigs there – this one and we saw Pink Floyd perform the wall there the previous year. At that gig there had been all sorts of stalls set up underneath the stands but tonight there was nothing. My cousin had given me a beer but when we got there I wasn’t allowed to take it in and as I was already bursting to go to the toilet I couldn’t just drink it outside either so I had to give it up. My memory is that we were quite near the front but sitting on the raked seating on the right of the stage so we were looking down and across at Dylan. The show started by the band coming out and doing not one, not two, not even three but four gospel tunes before Dylan himself came out and they launched into Gotta serve someone and then another track of Slow Train I believe in you. At this point we probably thought that they were only going to play religious stuff so I expect that 20,000 people breathed a sigh of relief when he finally played Like a Rolling Stone! 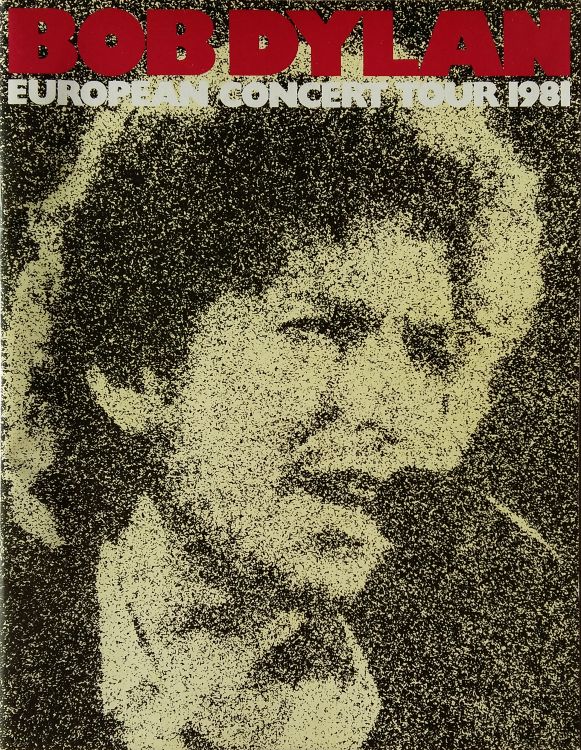 The gig went on like this with the newer songs interspersed with some of his greatest hits. There was a first time played of In the Summertime  and he played a traditional tune that he said he used to play at the Troubadour called Mary from the Wild Moor. The show finished with a couple of new tunes and Dylan left the stage after the final song In the Garden but not before introducing the band and promising to come back to the UK again very soon. The encores were three old favourites Blowin in the Wind, It’s Alright ma and Knocking on Heaven’s Door.

Some of this tour have been released on the Dylan Bootleg Series (Vol 13 Trouble in Mind) but sadly none of the tracks from this night made the collection. There is however a complete show from the tour included and that was from the night before the 27th. I also found this video of one of the shows  (30th) on Youtube

Come on in the house of the Lord*
It’s gonna rain again*
Show me the way*
Saved by the Grace of your Love*
Gotta serve somebody
I believe in you
Like a Rolling Stone
Till I get it right **
Man gave names to all the animals
Maggies Farm
Simple twist of fate
Dead man Dead man
Ballad of a thin man
Girl from the North Country
Slow train
Walking around heaven all day ***
Mary From The Wild Moor #
All along the watchtower
Heart of mine
Mr. Tambourine man
Solid Rock
Just like a woman
Watered down love
Forever Young
When you gonna wake up
In the Garden
E
Blowin in the wind
It’s alright Ma (I’m only bleedin’)
Knockin’ on heavens door

I always think that Dylan’s performance of Gates of Eden at Blackbushe was the only time I saw him stand alone and sing with just an acoustic guitar but actually he did it at Earls Court in 1981 as well for It’s Alright Ma during the encores! 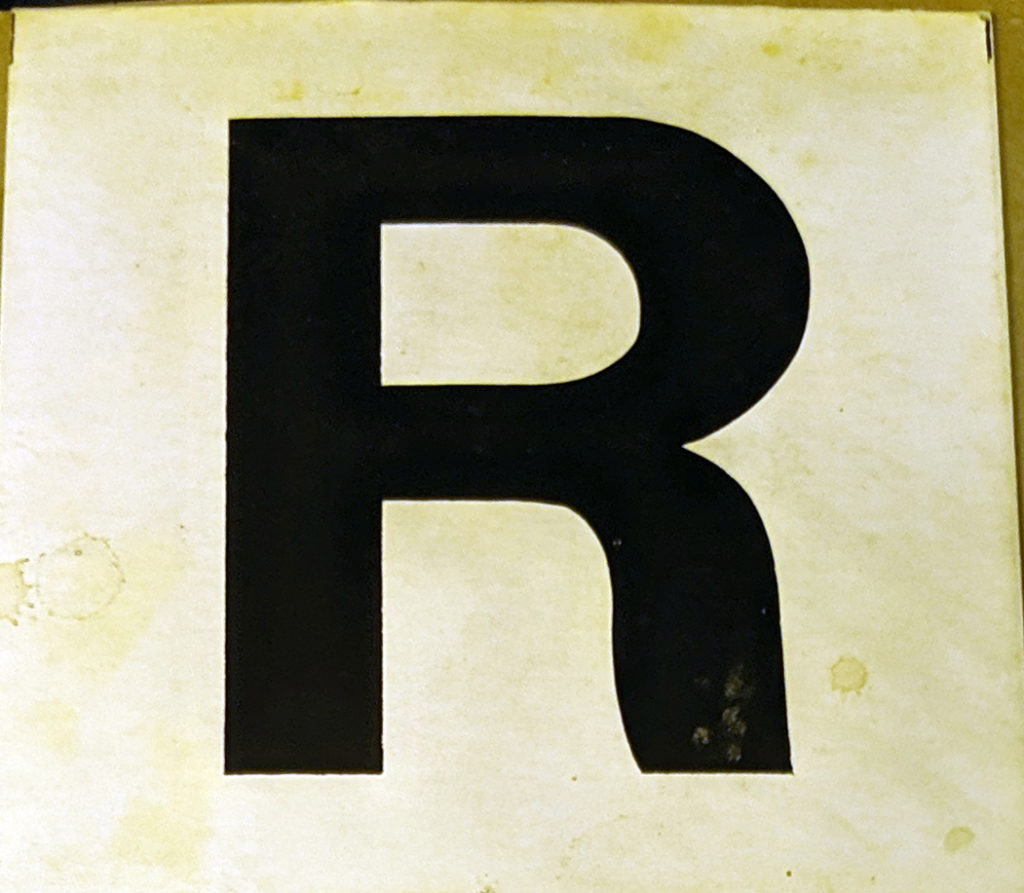 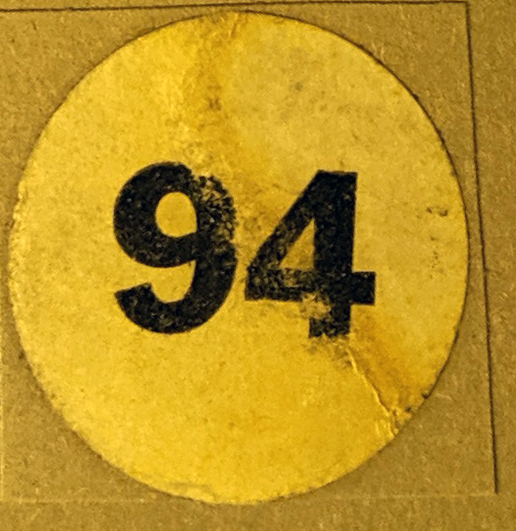