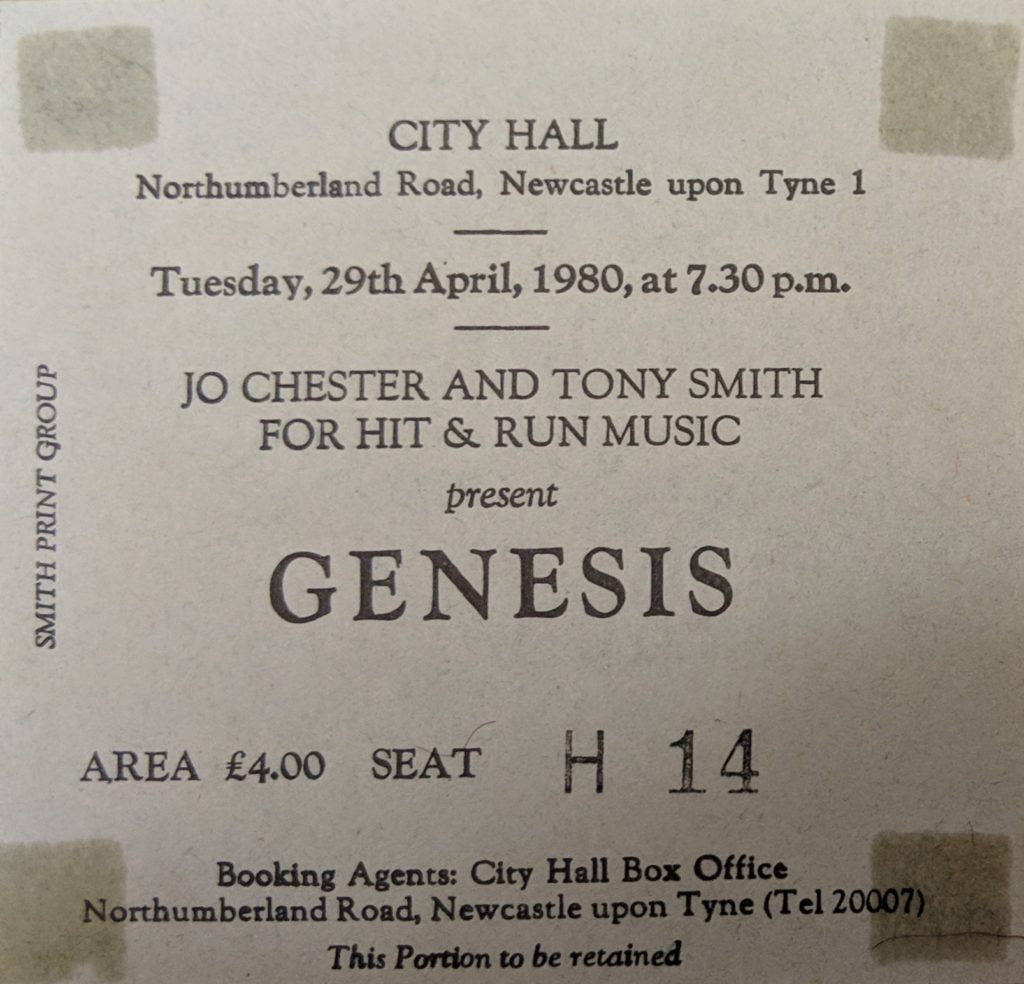 By the time they announced their 1980 tour Genesis were what we would now call an arena band so two nights at the Newcastle City Hall was more than you could have imagined in your wildest dreams! So plans were laid to make sure that we got tickets for both nights! We were going to queue out for not one, not two but three nights just to make sure! I had Wednesday afternoons off college so I set off to claim a place at the head of the queue with the idea of getting there just after the box office closed up for the night! 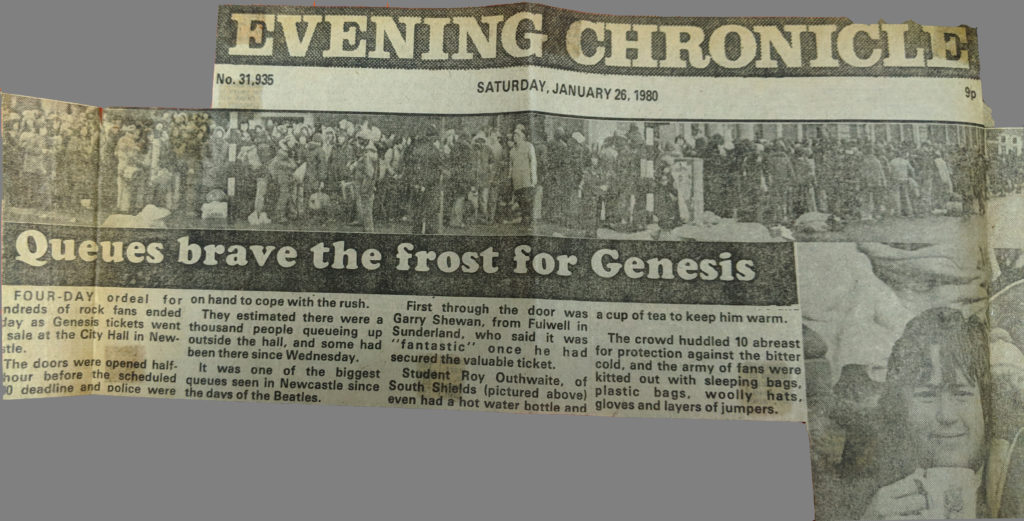 As it happened the staff came out just as I got there and realised what I was doing and just rolled their eyes at me! I was supposed to be staying there until my brother  Garry and one of his friends to arrive but they were late and while I was waiting Jimmy and Ros, who we’d met while queuing for Rush tickets came past and I ended up leaving Garry a note and popping round to their flat! By the time I got back they were settled in for the night. There were about 6 of us and shifts were drawn up and the time between when I got there and when the tickets went on sale was covered. 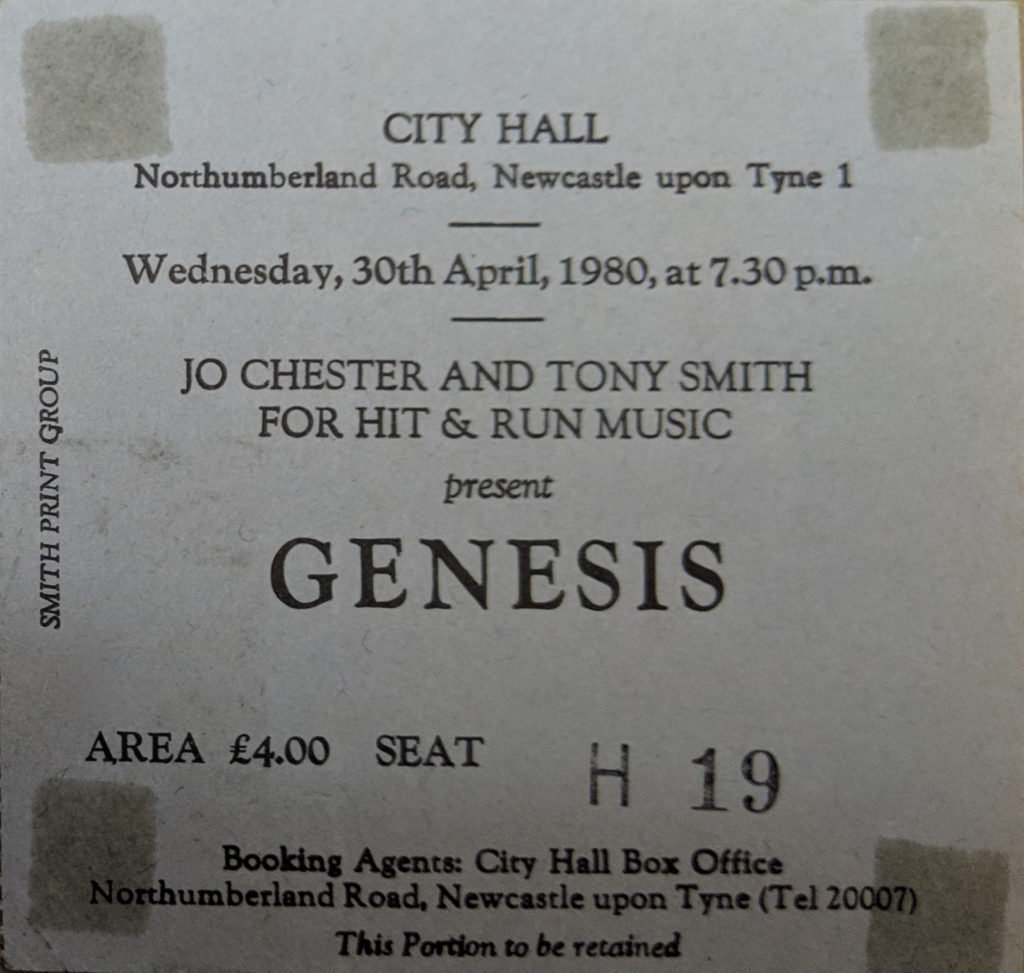 We were all there for the final night and by that time one of us had made sure that the box office staff had our names in case there was a bit of a crush and we lost out! I spent most of the night wandering round and then met this girl called Sylvia who I spent most of the rest of the night with (in her sleeping bag for warmth (honest) – well actually it was her friends sleeping bag and he wasn’t happy!) By the time the box office the queue went all the way round the City Hall, crossed the road and went down College Street. Talking about the college – there was a man who worked at the Poly who lived next to the City Hall who kept coming out and shouting at us – I think it was because of the Genesis queue and this man that the City Hall had to change its policy on selling tickets for big shows! 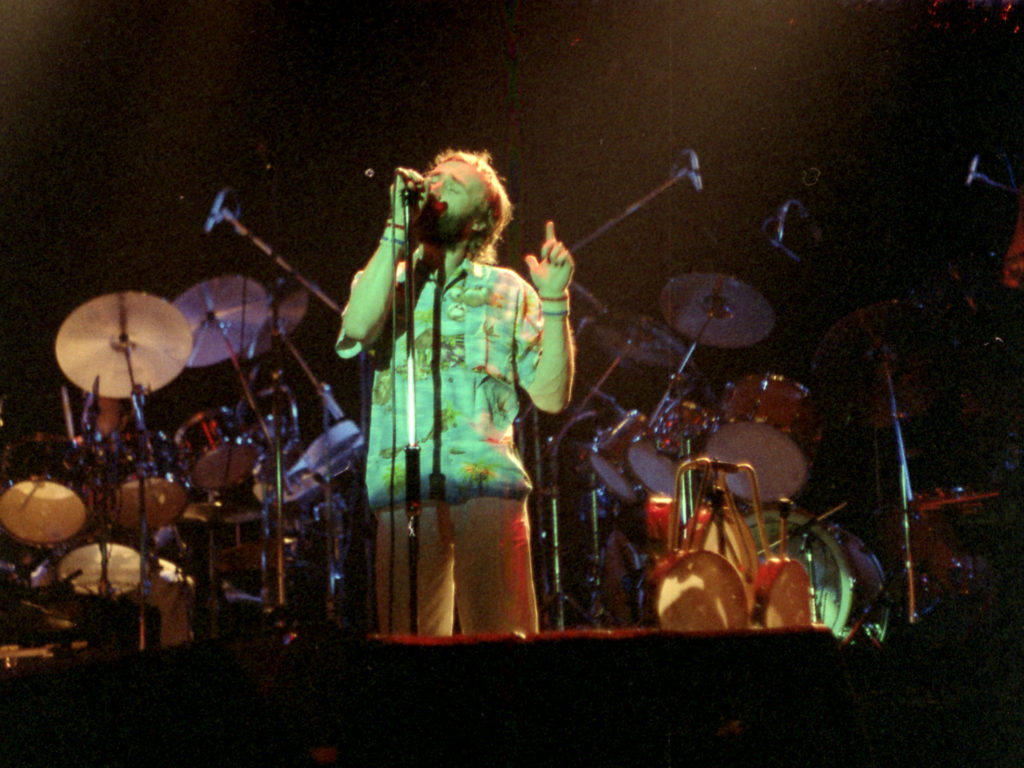 As had happened at previous gigs the first few rows were held for the fan club members so we had to do with being in about row 6! Still we had great seats for both nights and that was all that mattered! I took my camera on the first night and on the second night I took my camera bag but inside was a small portable tape recorder but I didn’t do a very good job of recording the gig and it came out all distorted! 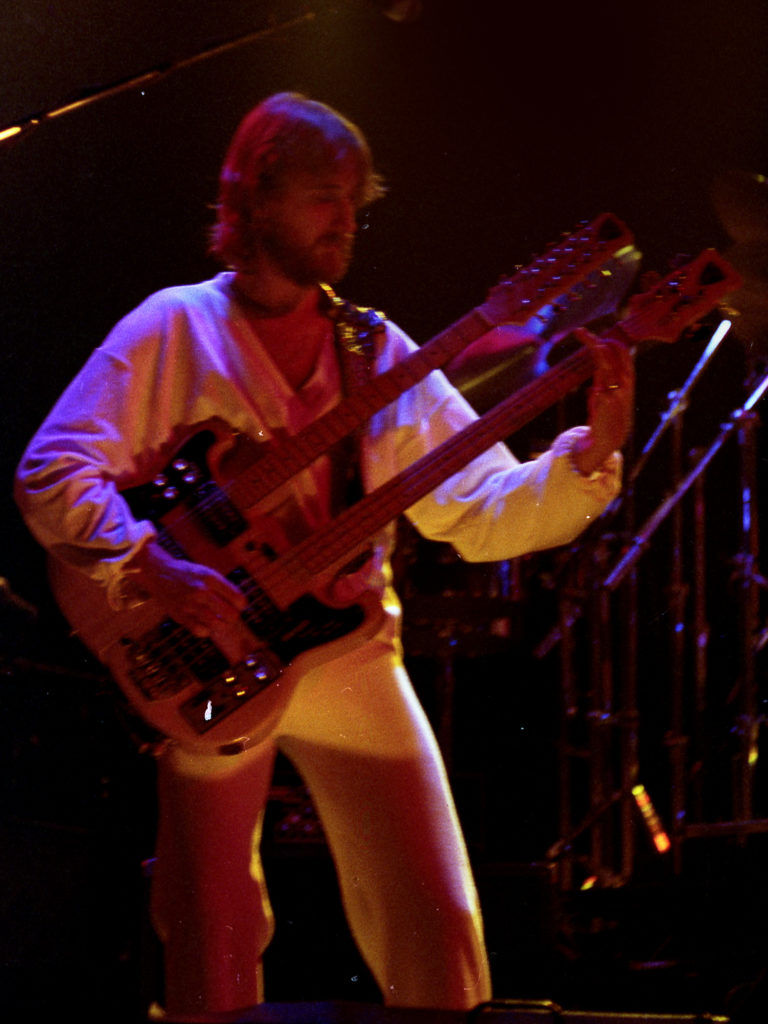 At that time Genesis consisted of Phil Collins, Mike Rutherford and  Tony Banks with Daryl Stuermer and Chester Thompson. There was a massive lighting rig and two drumkits so there was barely any room left on the stage. Collins spent most of the gig standing singing at the front but did every now and again go and take up his drum stool and trade beats with Chester Thompson! They did the same set each night and Collins told the same stories between songs each night! 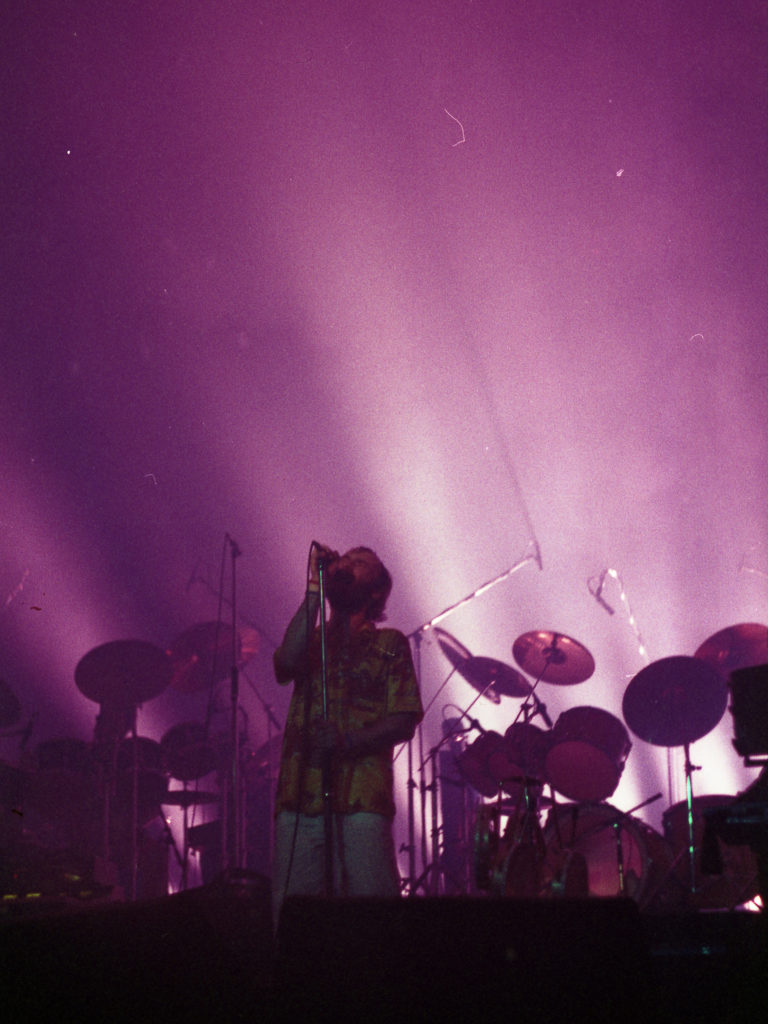 Was it worth it? At the time yes! I bumped into Sylvia again at the second night and we ended up hooking up again which caused me all sorts of problems as I was already seeing someone! naughty me! 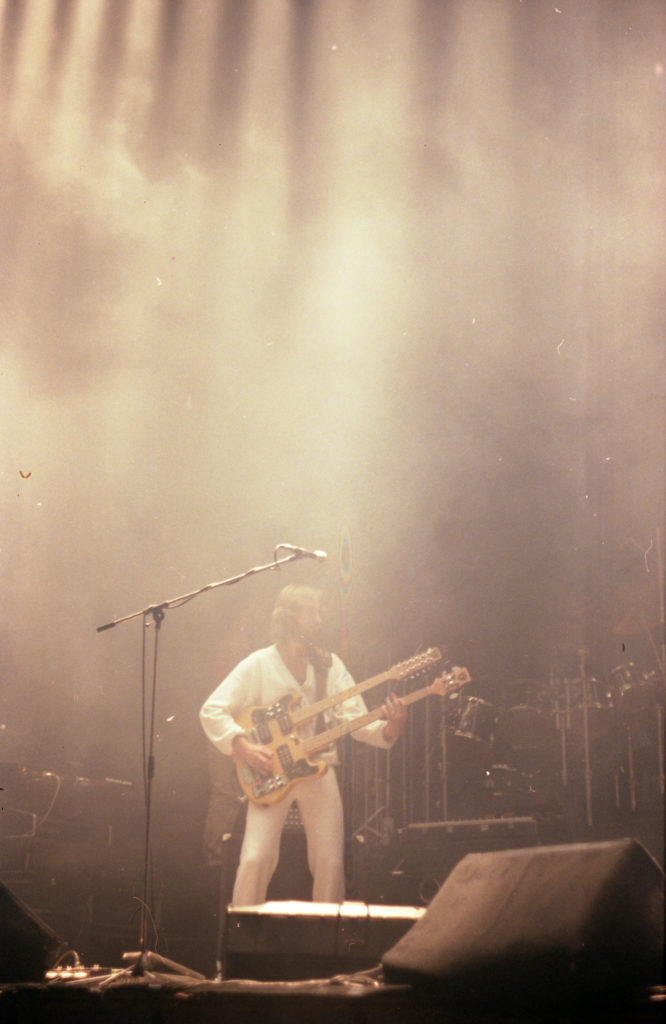 Many years later my nephew wanted to go and queue out all night so he could buy the latest pair of trainers but my brother said no! He then said it was unfair because when his dad was his age he queued out all night to get tickets for a concert! I pointed out that 35 years later we still remembered the concert whereas in a few months he wouldn’t even remember the trainers! 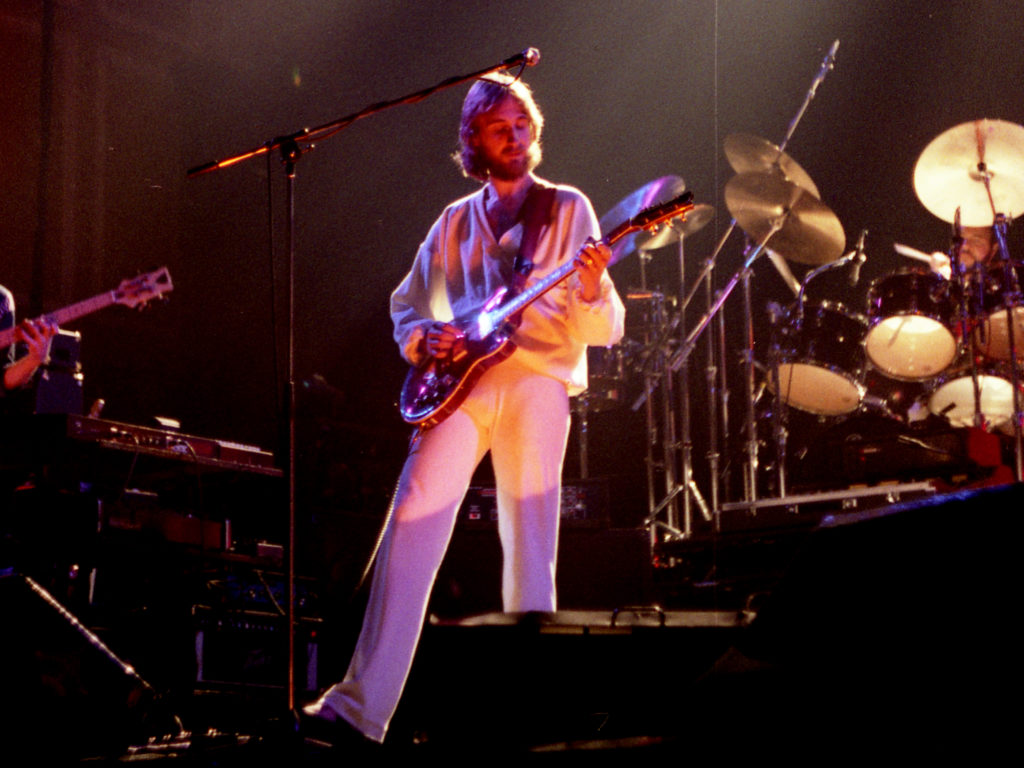 I found this recording of the second night online – they did a better job of it than I did!

All photos from the gig taken by me! 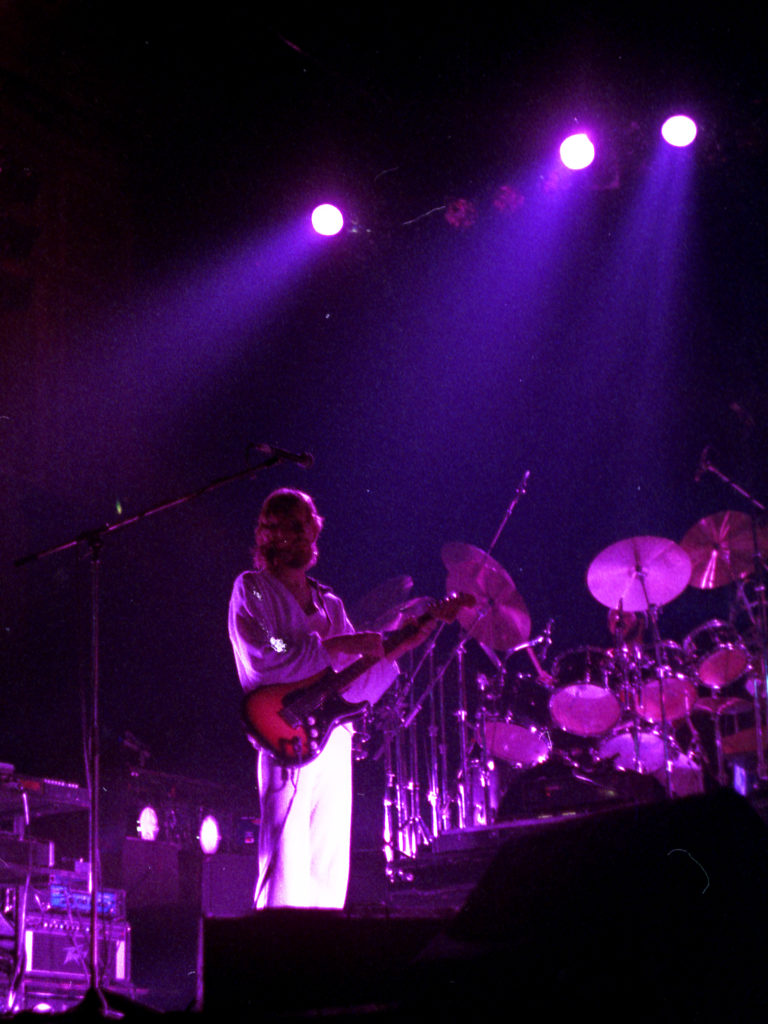