I had tickets to see Jefferson starship tonight in Chatham but before I can go I’ve got to get home fromLondon, pick up the car and collect the French students that are staying with us. however when I got back Sarah gave me the news that the students were going to be an hour late and therefore wouldn’t be back until 8. This then became 8:30 and after I rang the venue and found out that the band were expected to be on stage at 8 it was starting to look like it wasn’t worth going. However as I drove back from picking up the students I reasoned that as the woman had said the support band were on at 7:30 it was in mind mind unlikely that Jefferson would be on at 8. Even if the support band only played for 30 minutes there would still need to be time to move their equipment off stage. So I reckoned that even if I got there at 8:45 I’d still see at least an hour and a quarter of the gig. So I decided to drive down and hope I hadn’t missed anything good!

I arrived at the venue and just as I was walking up the stairs I heard the familiar opening notes of their mega hit White Rabbit so I dashed down to my seat in the front row just in time to see them play it. It was a bit of a baptism of fire in my head to hear the singer Cathy Richardson sing White Rabbit as the first song I’d hear her sing but she has a great voice and takes the Grace Slick position in the band very well. I did wonder if something had been said by someone in the audience before I got here as I over heard her having a conversation with someone in the audience at the end of the show.

I have to confess that I’ve never been a big Jefferson fan – in fact the main reason I went was that it was so close to my house but on the whole I enjoyed it. The song choice was a bit odd at times given their back catalogue and that of David Freiberg who was also in Quicksilver Messenger Service. Apparently one of the things I missed before I got there was a rendition of Dark Side of the Moon and they did another Floyd number Set the Controls for the heart of the sun a bit later. Pink Floyd played at the Central Theatre with Jimi Hendrix back in the 60’s so maybe it was their spirt that forced their hand! Another oddity was the inclusion of  David Bowie’s Space Oddity at one point. A more welcome interlude was David Freiberg singing a Robert Hunter song – his voice is still very good despite the passing years.

On the far side of the stage Paul Kantner’s voice hasn’t travelled as well but he is still an interesting performer despite the fact that he has reached the ripe old age of 71. He occasionally had to prop himself up on a flight case behind him while playing but according to a friend of mine he doesn’t do this as much as he did a few years ago. he also headed off for a break in the middle of the set leaving Cathy and David to sing some songs as an interlude. One of the things I had worried about was that I recalled from reading a review of an earlier gig a week back that Wooden Ships had preceded White Rabbit but thankfully the set list had changed and it was later in the set. I know the song mostly from the CSN version but this was good too with some fine harmonies.

The only down points for me were the venue – not right for the gig with the audience seated throughout and the sound which was a bit wishy washy. having said that there were no “bouncers” in the hall so once I’d plucked up the courage to get my camera out I could happily click away to my hearts content!  I also thought the band could have extended the jams a bit on some of the songs as well, there were points where they just seemed to be getting going and then they’d change tack or the song would end. I think if they’d dropped some of the odder cover versions (the can keep the Hunter song and Set the Controls) and spin out the songs from their back catalogue then they be outstanding. 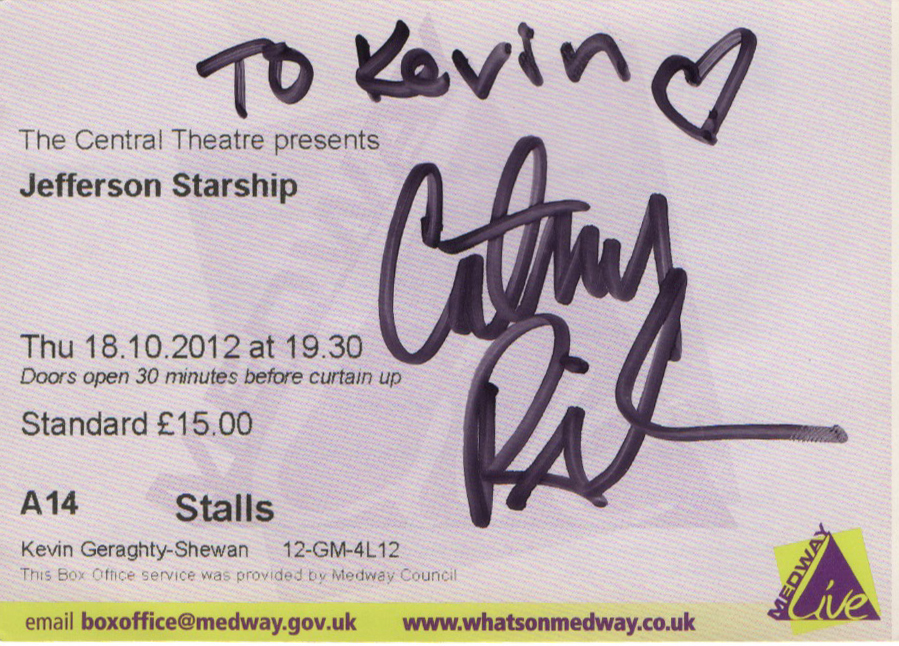