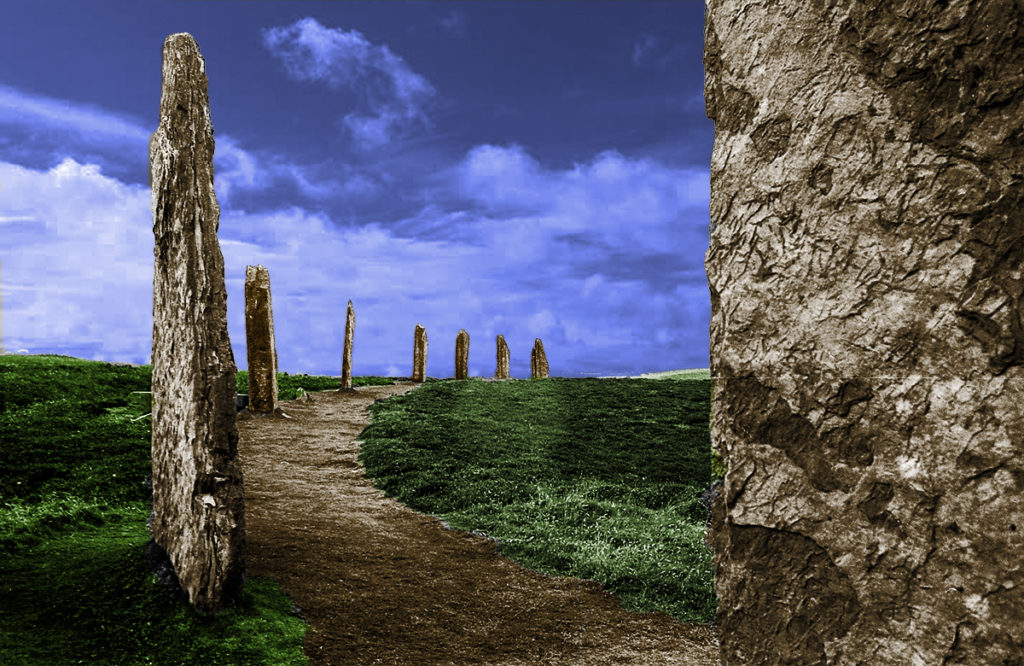 I’ve been to the Orkneys twice, once as a child on holiday with my parents in the late 60s/early 70s and then again in 1989 with my first wife just after we got a car and just before we had our first child.

I remember the ferry crossing as a child, the car had to be lifted onto the ferry by a crane and as it went up in the air my father was horrified by the amount of rust on the bottom of our trusty Morris Traveller (actually it wasn’t that trusty – on another holiday the front wheel fell off and once in Robin Hoods Bay we all had to get out because it wouldn’t make it up the hill fully loaded) The crossing between Scrabster and Stromness was very rough and the ferry was being thrown around quite a lot, rocking front to back on the way there, side to side on the way back. I ended up being sick on the return journey, I’m not usually sea sick but my dad claims it was because I’d been stuffing my face with mint imperials! 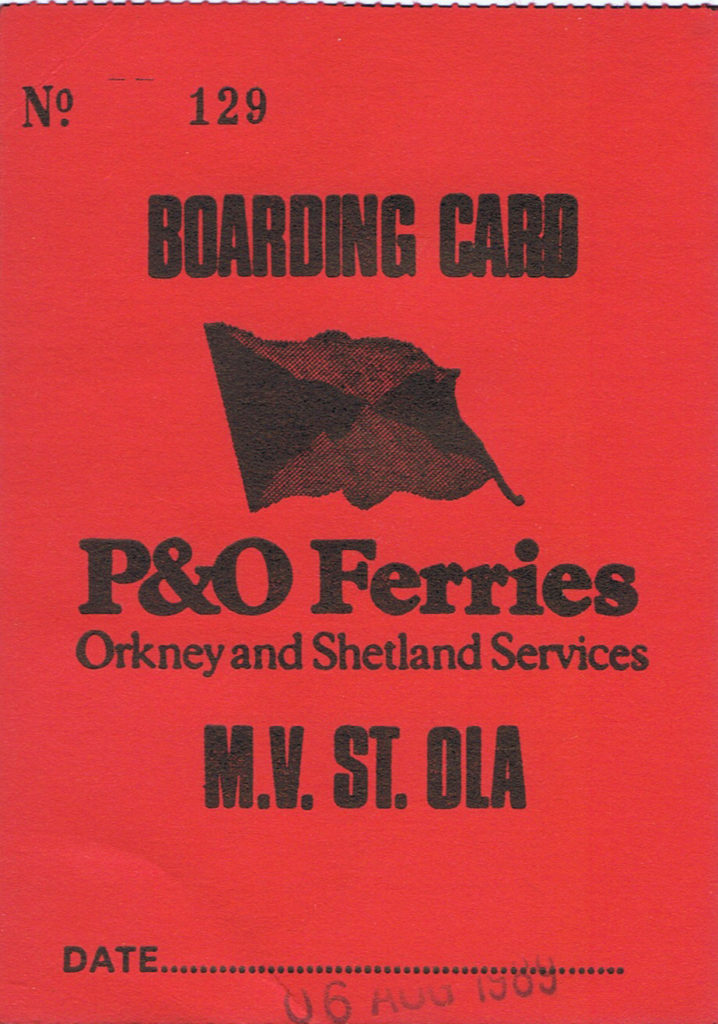 The crossing twenty years later wasn’t as bad although it was quite windy the remnants of a huge storm the previous night. We hadn’t been able to get on the ferry so we booked for the following day and camped at a site near John O’Groats. We’d just finished eating when the beautiful blue sky suddenly clouded over. We went to bed and spent most of the night worrying that the tent was going to blow away. The ferry was quite expensive (or that’s how it seemed) at around £82 for the return journey.

On both trips I remember going out on deck as the boat sailed past the Old Man of Hoy. The 500 foot high sandstone stack is always an impressive site as you’re coming into the island group. In 1989 we went out on deck as we sailed into Stromness so I could show my wife where we’d stayed on the previous visit but were beaten back by the wind!

The campsite in Stromness is on a headland called the Point of Ness. When we stayed there the first time the site was very basic with just one toilet with a sink and cold tap outside it. The sign said that the fee was something like a shilling a night but no one came round to collect the money the whole time we were there so my dad pushed an envelope with a pound note in it through the letter box of the town hall just before we left and he received a receipt through the post a few weeks later.

In 1989 we initially drove to the campsite but my wife wasn’t keen so we drove to another campsite near Kirkwall but it was very busy and I managed to talk her into going back to the original one. As we arrived I spotted a Morris Traveller parked near the entrance which seemed like an omen! The campsite facilities had improved a lot but again no one seemed to want to take money off us. It was the last night before anyone appeared in the site office and even then we could have just not bothered going in and I’m sure we’d have got away with it! 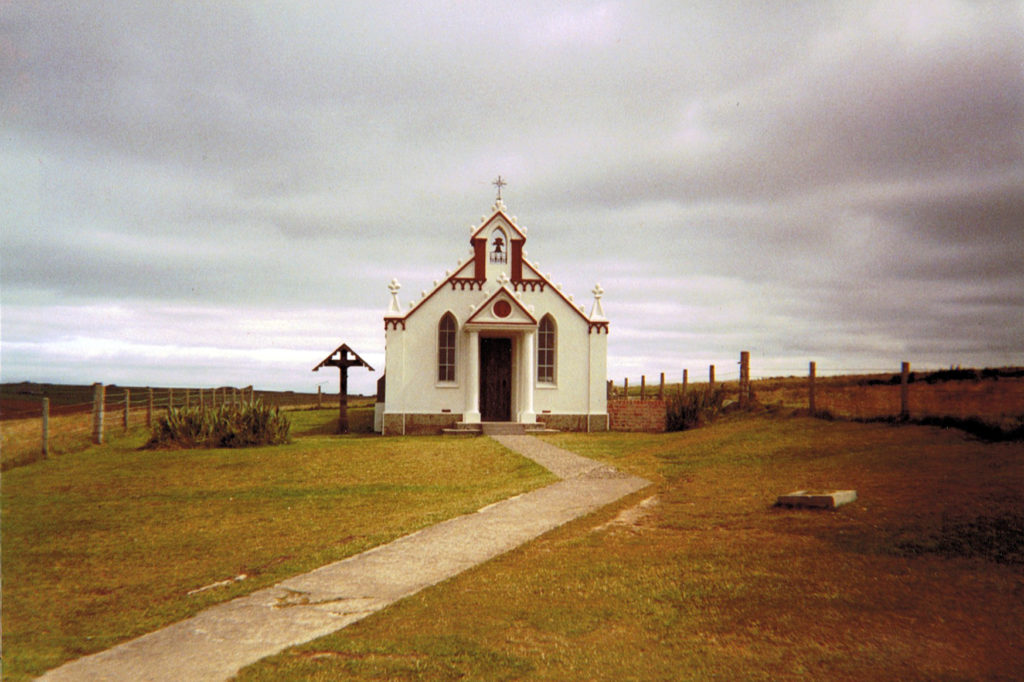 As kids our main preoccupation was exploring the world war two pillboxes that were on the path that ran along the headland. They were still in quite good condition 25 years after the end of the war although they were still there twenty years later. We also collected stray golf balls that we found along the path, at first our parents thought we were going onto the golf course and nicking them but when they walked with us they saw where we were finding them. Obviously when we went as adults we could go into pubs. I remember we were in a pub one night and an Australian couple came in. They got talking to the barman and after a while they said

The barman laughed and replied “Cold? This is summer, this is warm!”

Sadly there are, to my knowledge, no photographs of our first visit but thankfully we took two cameras in 1989.I took my Nikon F301 which I took the black and white images. I never got the pictures printed as I developed them myself and although I scanned a few in around 2012 it wasn’t until 2020 and the Coronavirus lockdown that I finally scanned them all in. We also had a point and shoot camera, probably an Olympus X1A which we used for colour photography. These were printed out and put in a scrapbook that we foolishly didn’t write the names of anything in so there has been a lot of detective work going on too. 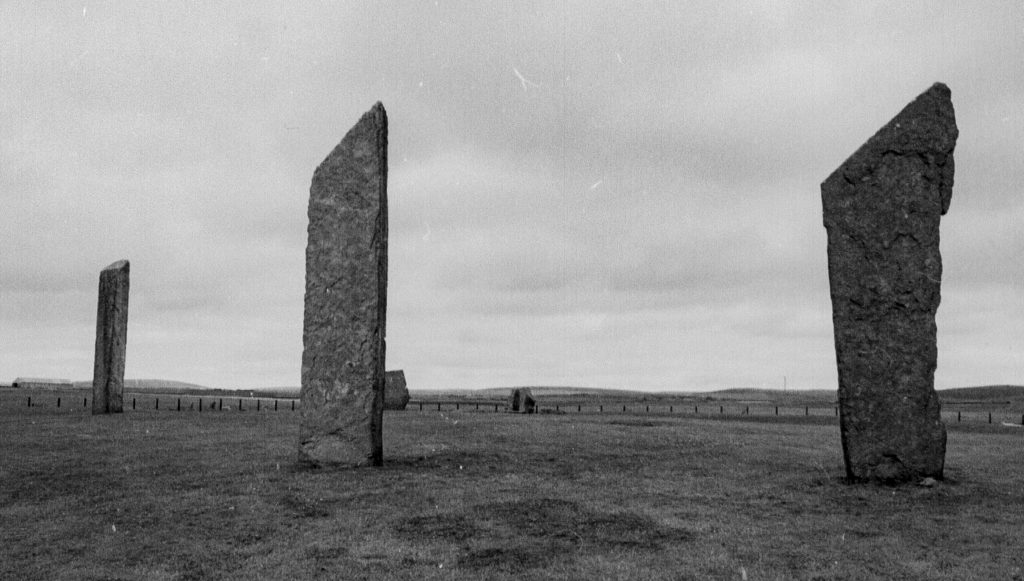 The places we went to visit in 1989 were the Ring of Brodgar, Stenness, Maes Howe, Skara Brae, the Broch of Gurness, the Italian Chapel, Scapa Flow and the Churchill Barriers.