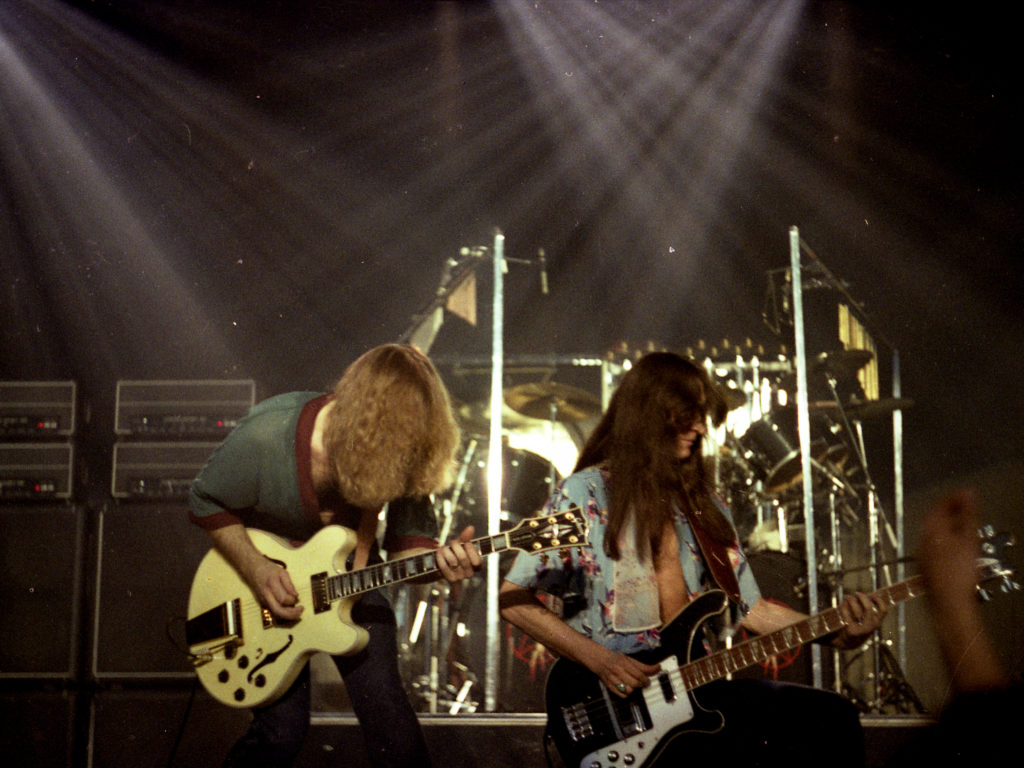 Rush were huge with us back in 1979 – we’d seen them once already and we were keen to see them again! So keen in fact that we decided that in order to get decent tickets we were prepared to queue out all night outside the City Hall to get them! We’d done it once already for Eric Clapton the previous year and we were going to do it again. There was only one thing we hadn’t factored in…snow! The night before the tickets went on sale there was a couple of inches of the white stuff on the ground. That wasn’t going to stop us though! 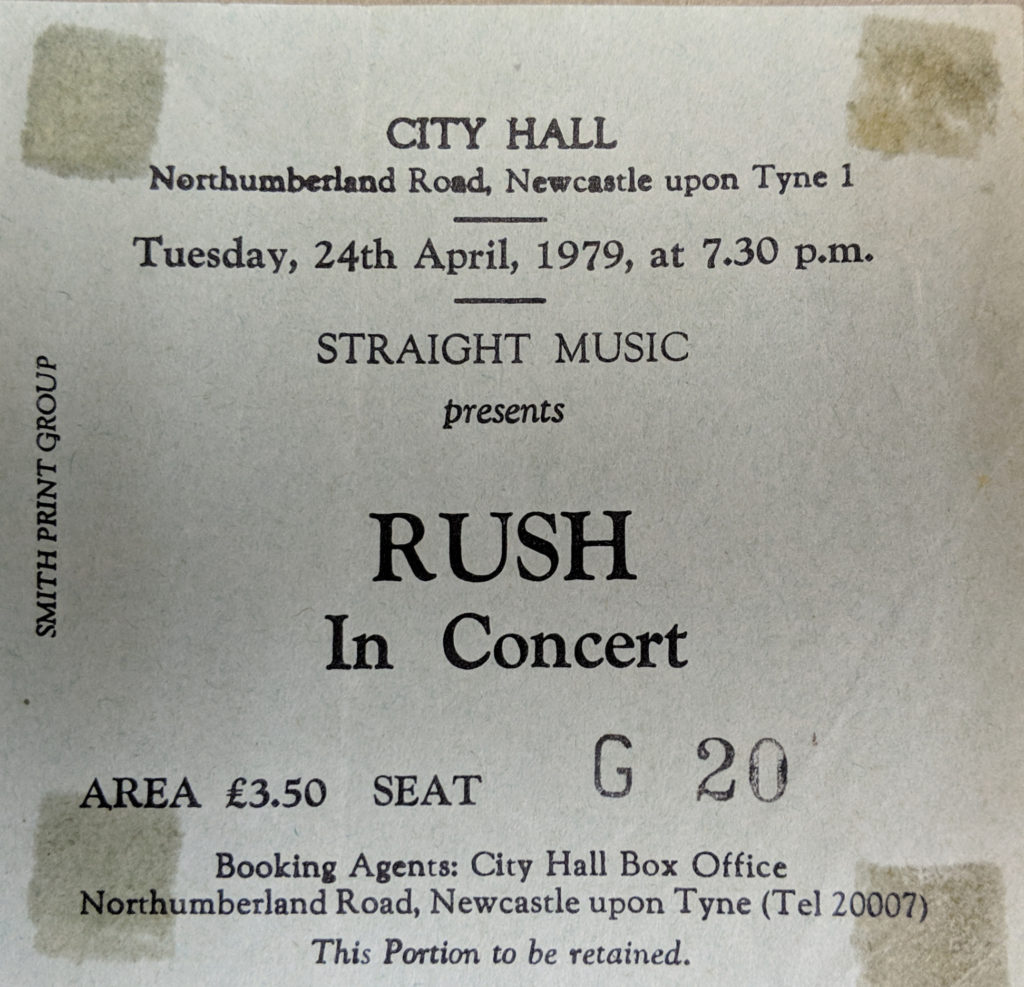 My mum wasn’t happy about it and as the temperature dropped she decided that she was going to do something about it and my dad was duly despatched to come and pick us up and take us home. When he pulled up on Northumberland Avenue though he just came over to us and gave us some money to get something to eat and then went home. My mum asked us where we were and he said “well there were so many people there I couldn’t force them to get in the car!” She wasn’t happy! 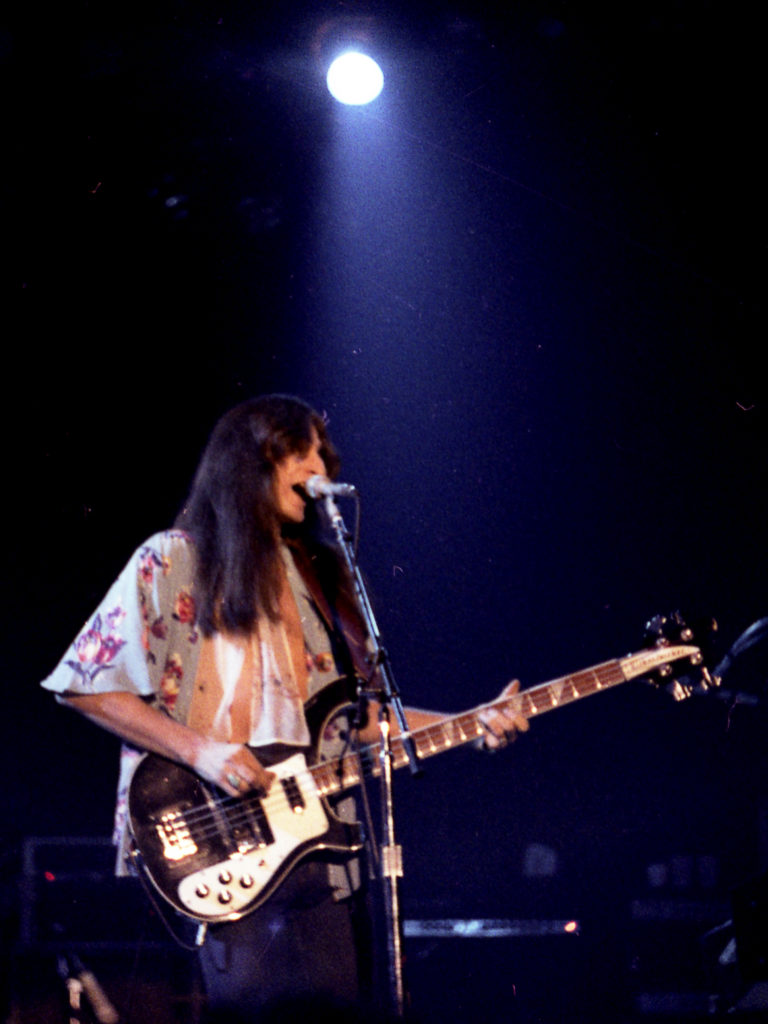 I remember during the night some of us wandered off and ended up in the car park of Newcastle City Centre where there was obviously some sort of strike going on because there was a fire in a brazier but it was unattended at that point so we warmed ourselves around it. Another couple who were also in the queue then invited us back to their house which was just around the corner to warm up. We felt a bit guilty leaving whoever we had left in the queue while we did this but we did it anyway! Their names were Ros and Jimmy and we ended up becoming good friends! 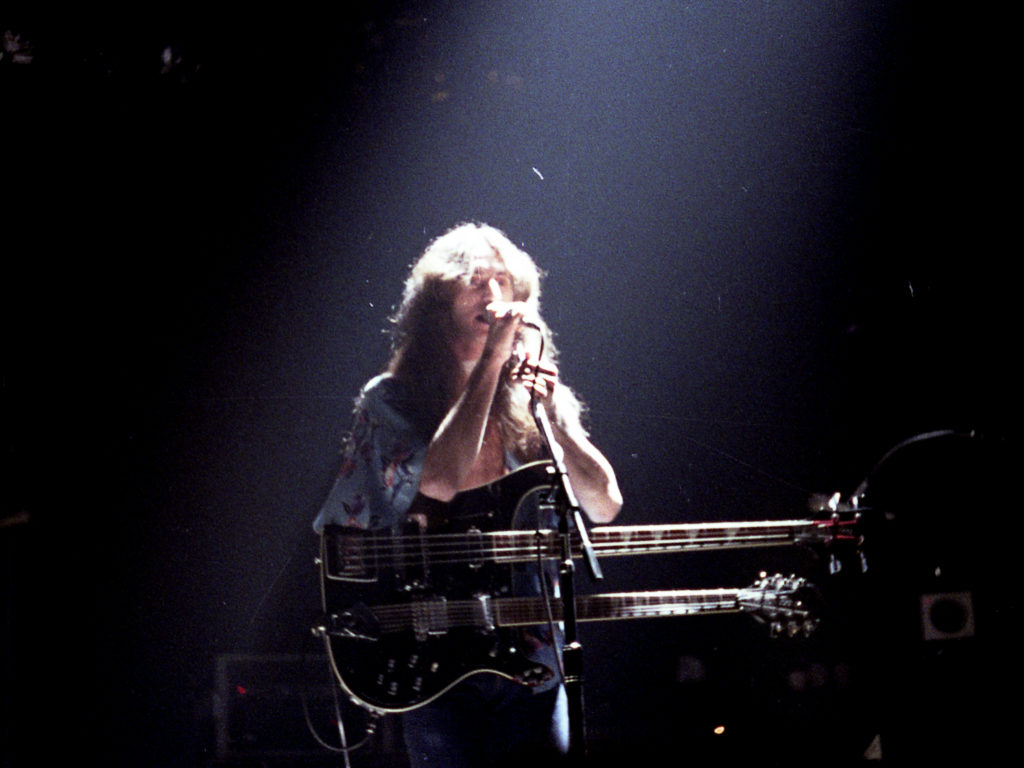 We bought tickets for the second night – I guess we hadn’t got into the idea of going both nights yet! We got tickets in row G – I think that may be a couple of the rows in front of us had been kept back for members of the fan club or something like that! Still they were good tickets and I was looking forward to taking my camera along and taking some pictures of the band. 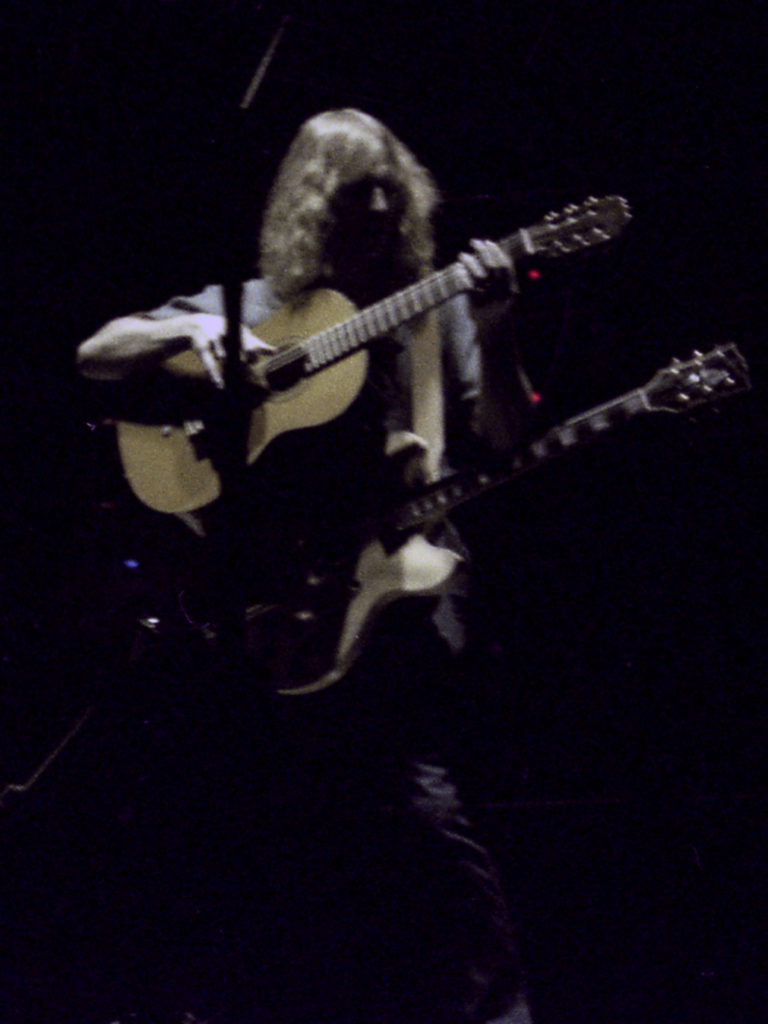 This was probably the most over the top Prog rock gig of the three that we saw! The tour was to support their new album Hemispheres and included the side filling Cygnus X-1 Book II which followed Part I from a Farewell to Kings plus almost all of 2112 and Xanadu  as well as La Villa Strangiato, A Farewell to Kings and others. We even got a mention from Geddy Lee during the show for queuing out in the snow! 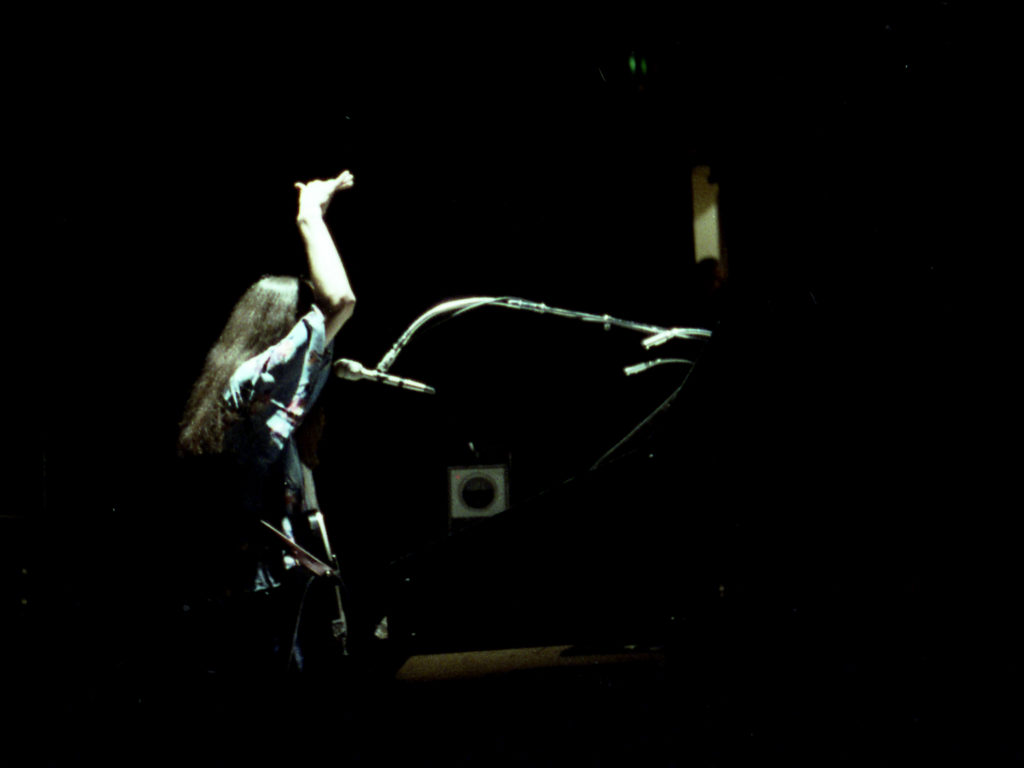 It was at this show that one of my favourite rock photos was taken – there was a journalist from Sounds following the band round and his photographer took the picture below from the back of the City Hall – I think it’s wonderful! We even got a mention in the Sound article too – you can read it here! (I remember being very excited by the fact that I had sat in the chair that the band can be seen sitting in backstage!) 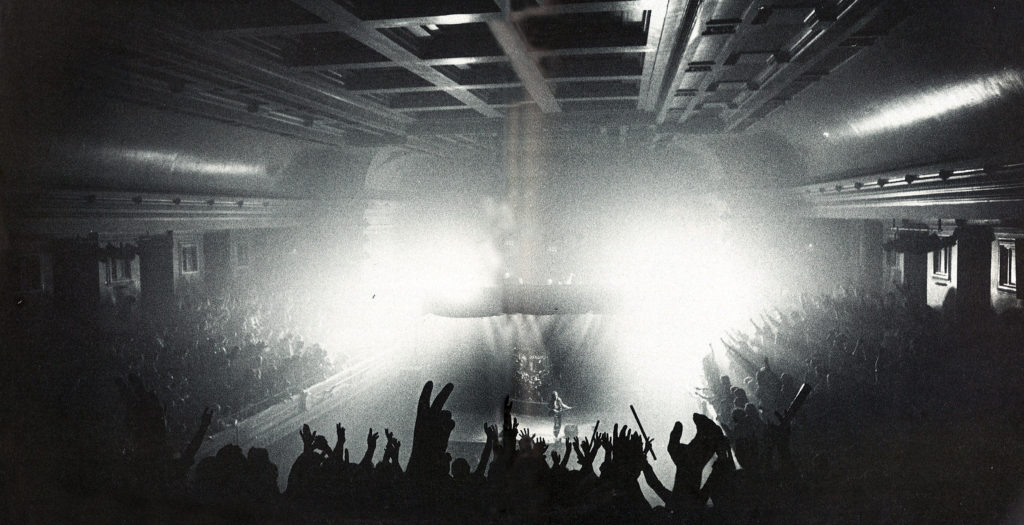 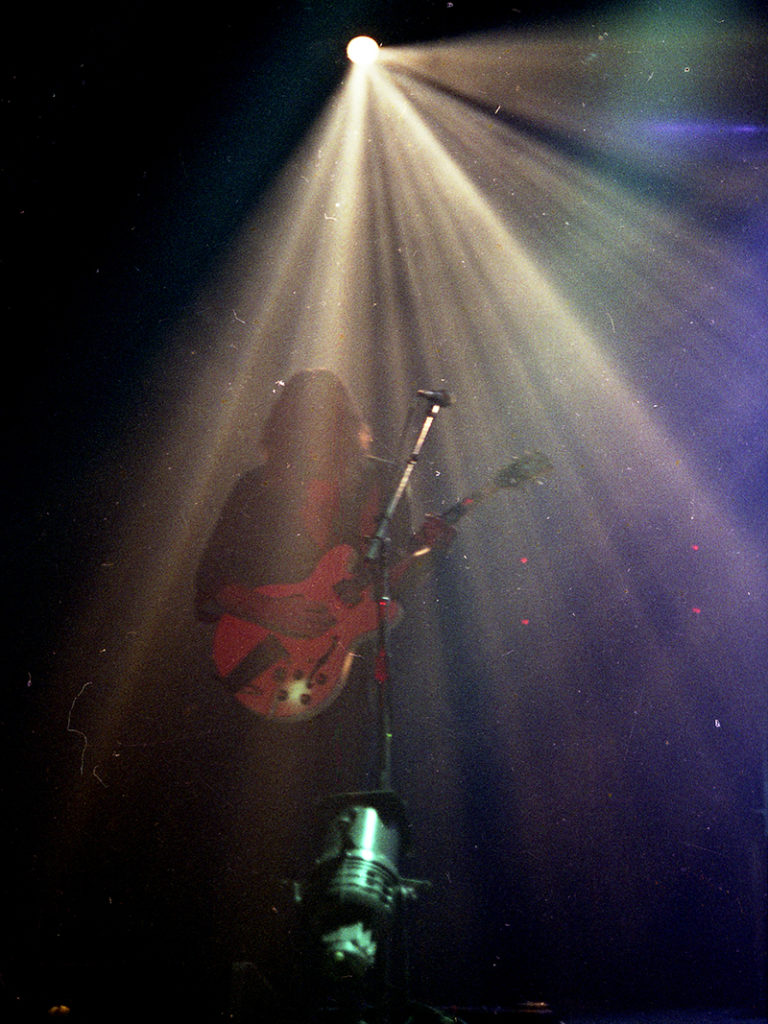 I found some audio recordings from that night