I slept much better after discovering the two mats had drifted apart and putting them back together again so I wasn’t lying on the hard ground! I woke up at 6:45 and went to the loo. As I opened the door I noticed that there was a wallet in the toilet (and when I say in the toilet I mean actually in the toilet!) Luckily it had a chain on it so I gingerly removed it and took it back to the tent. I looked through it later and it didn’t have any ID just lots of money! I noticed as I walked back to the tent that Jay’s van was still there. I didn’t think I’d get back to sleep but next thing I knew it was 8am! That’s two mornings running! I noticed when I got out of the tent that Jays van had gone and I hadn’t heard it go despite it being parked right by my tent! 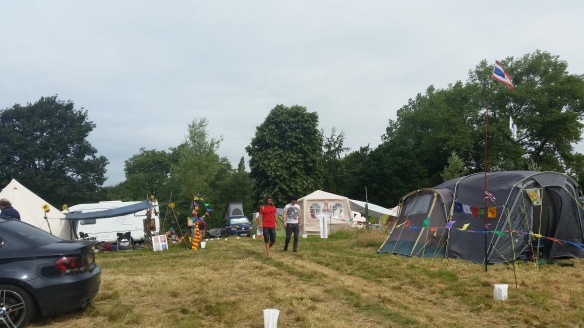 It was another beautiful day, I popped on the genny and made some tea and wandered up to the bar to see if John was there as usual – which he was! I was lucky enough to get there just as they started serving breakfast so bacon, sausage and egg was just what I needed! By the time I got back down to the stage the first act was already there! It was Dave Sharp who used to be in a band called the Alarm who we’d met a few times when i was at Uni. I told him my Alarm story and he remembered it and told me the same thing had happened when they’d supported U2 at Red Rocks! I gave him some tokens to go and get some breakfast and hoped Jay was going to get back from Medway with his daughter in time.

Jay was obviously back in time and Dave Sharp played a nice set of acoustic tunes and he was followed by Crooked Weather who’d come down last night so were here bright and early. I don’t remember much about their set but they were well received by the audience.

One of the reasons I don’t remember much about Crooked Weather was that I had already spotted that the next act, Gary Crosby, hadn’t arrived yet. They were also late last year (jazz time?) and we had to swap the running order round but I also knew that the act that followed them Zervas and Pepper weren’t here yet either! I telephones Gary’s wife and she assured me that they were on their way and sent Gary’s number by text. They did eventually turn up but it was quite late and by the time we got them on we were running about half an hour behind. If I’m honest I preferred last year’s set with Groundation but it was still an enjoyable performance and again well received. 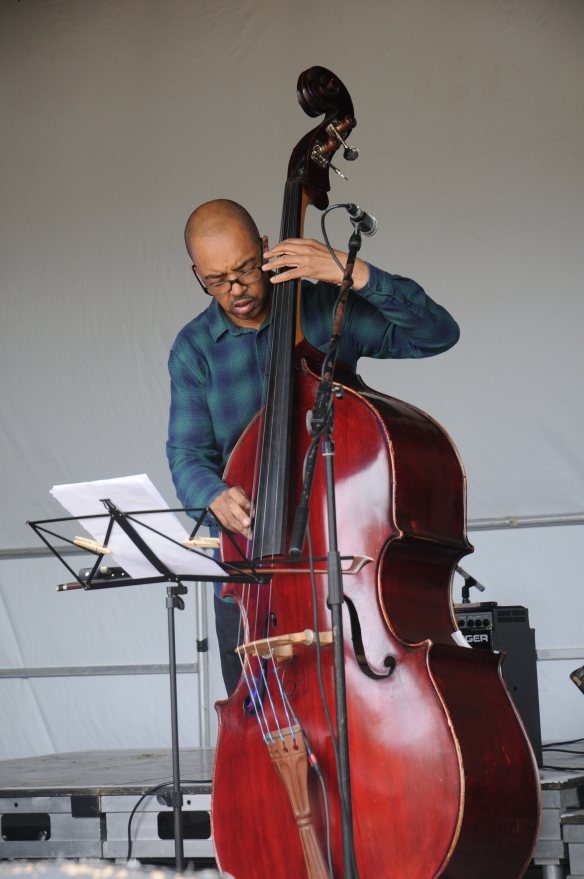 John had sent me a CD of Zervas & Pepper but it didn’t do anything for me at all. I did think they were better in concert than on CD but to me the high points of the set were cover versions! 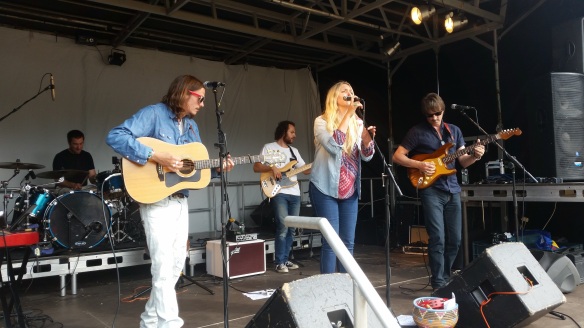 The next session was a mystery, not only to us but to the musicians themselves as to how it was going to run so I discussed it with them and sent them away to work out a plan! It’s the first time I’ve ever heard the phrase “The problem will be Banana’ used! They eventually hit on a plan of Bruce Barthol doing another half an hour, followed by Barry Melton with the Green Ray and then the Green Ray by themselves and finally Banana and Barry doing 45 minutes to finish off. And that’s what they did. 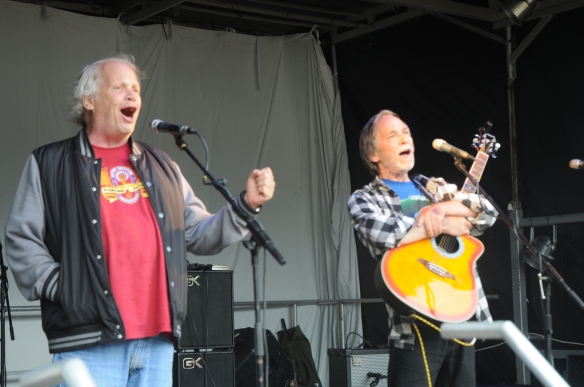 I didn’t think the Green Ray were as good as they’d been back at the very first SoL but two members of the band had died since then. I also didn’t think we got a fair share of Barry melton but at that point I didn’t realise he was going to be up there with Banana!

We finished the set still only 30 minutes behind schedule but we ran into rpoblems getting the next band on! The Terrapins and friends had two drummers, two keyboard players (one of whom played sax, a bassist and three guitarists! Needless to say it took longer than the 45 minutes we had allotted to get them up and running! They also planned to do 3 sets of 50 minutes and as the singer was telling me this I was thinking I can see we’re going to overrun here and we did! We seriously overran and din’t finish till 1:45am by which time I’d been told that the neighbours had been complaining and I was told to make sure the encore was definitely the last song! 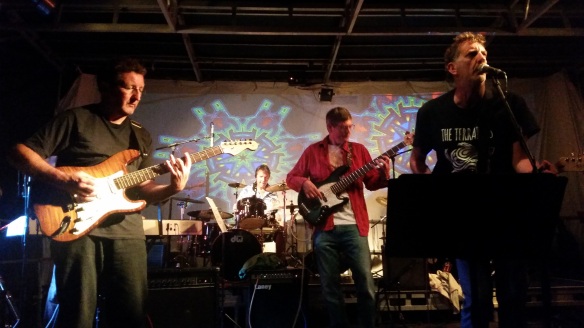 The highlight for me was the opening of the third set with a jam into Dark Star. The Dark Star could have been a little more adventurous but I still enjoyed it very much. I stood right down the front with a glass of mead in my hand and just enjoyed the show as I have done for the past ten years. I don’t think the thought of “oh no this is the last ever time I’ll do this” even entered my head!

I finally crawled into bed at 2:30 am with a huge grin on my face – it’s been a wonderful ten years and you never know what might happen in the future but we did it, year after year with love and music and that’s what counts! 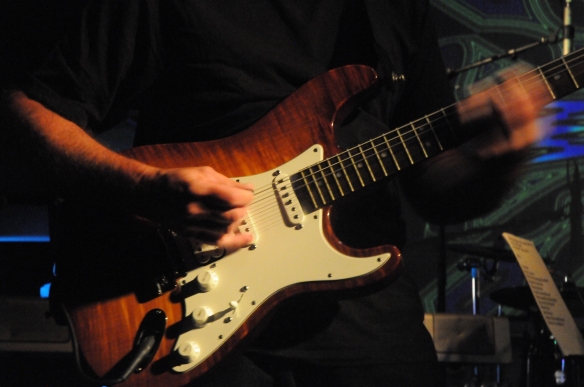 Despite not getting to bed till 2:30 I woke up at 7 and decided that I should get up and go and get the cables that ran through the bar out before the caterers started to cook breakfast. I did this quite quickly and then headed back down to the car to pop the kettle on for a cup of tea! I also discovered that the car battery was flat. I had meant to run the engine yesterday but I had got distracted and it slipped my mind – oh well it’s not as if i haven’t had to get a jump start on the Sunday before!

I went up to the bar for a bacon sandwich and spotted this sign. I think it is the first time they’ve ever ran out of beer!

It didn’t take me long to get all my stuff packed away but I had to wait until Pete and Jay surfaced as I needed to get some cables that they were using to take back with me. I packed up all of the power cables and by then they’d appeared. Luckily I’d taken my tent down because it started to rain! Eventually I had everything in the car, Phil gave me a jump start and I was on my way home.

I had to stop off at Keith’s to put the boxes in his garage but when I got there I couldn’t remember which one was his. I tried the key in the one I thought it was and it opened the door but when I raised the shutter there was a Porsche inside! I slowly lowered the door and relocked it. I ended up phoning him to check and then I was on my way again!

I set off through the Dartford tunnel and on up via the M25, M11 and A1. I kept seeing signs saying A1 closed after A60? but I find these things so annoying as I don’t have an encyclopaedic knowledge of the road numbering system. Eventually though near Grantham the traffic slowed to a halt. My SatNav was tell me to take the next right but I had to get there first. Slowly I crawled nearer and nearer and eventually I followed another car into the right turn. It was easy to get across the other carriageway as there was nothing coming and we pulled into what could only be described as a farm track. I drove down this single track road which in my 4×4 wasn’t too bad but the car in front seemed to be catching the underside on the raised centre. Eventually the car I was following stopped when it reached a ford!

The driver got out and looked at the water but then he was joined by the people in the car behind me who convinced them it would be ok! They drove forward and went into the water. I watched as the came to a halt but I have no idea why they stopped and they were soon going again. I drove straight through and out the other side but I did have a car that had an advantage in this sort of situation! Unfortunately once we got onto the main road the next turning was closed – the one that would have taken us back to the motorway. I followed the road which was quite crowded until the SatNav sent me down another side road and this time I came out right next to where the Police cars had closed the motorway. Luckily I could turn right and continue my journey past an ever expanding traffic jam on the other side!

I eventually got home about half six – too late to take to Taekwondo but our friends had already taken him, Sarah arranged for them to bring him back too as I needed to unload the car. We eventually got round to cooking dinner and then just as we took our first mouthfuls I saw the Tesco man walking down the path!