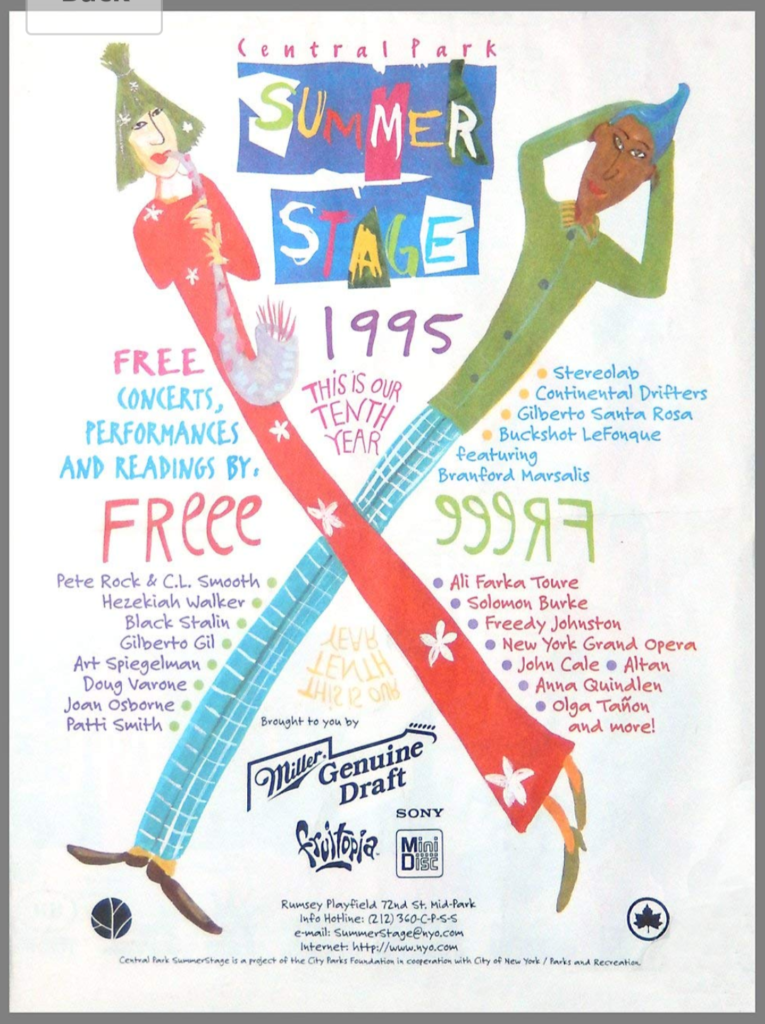 On arrival in new York I had bought a copy of the Village Voice and had scoured the adverts for gigs that I might like to go to while I was there. I was really pleased to see that G. Love & Special Sauce were playing in Central park on the Saturday afternoon just before I went home. I’d been a fan for a while since I heard Blues Music on the Saturday afternoon radio 1 show. The gig was in the afternoon so I got up early and went to explore New York first. I think I ended up walking all the way from 42nd Street to the Statton Island ferry and went into every record shop I found searching (in vain) for a CD by Tom Ovans. I caught the ferry and got off at the far end, ran round to the end of the queue and got back on the ferry for the return trip! Once I was back on the main island I was so knackered I caught the Subway back to the hotel where I dropped my stuff and headed for the park.

I found the arena without any problems and although the gig was free you were asked to give a $3 donation which I happily did. Once inside they had a weird system for purchasing alcohol, you had to queue to buy tickets and then you had to queue again to swap the tickets for beer. It was a red hot day and if I recall correctly they ran out of beer at some point. I also seem to recall this being the first time I ever saw the audience being hosed down to keep them cool! 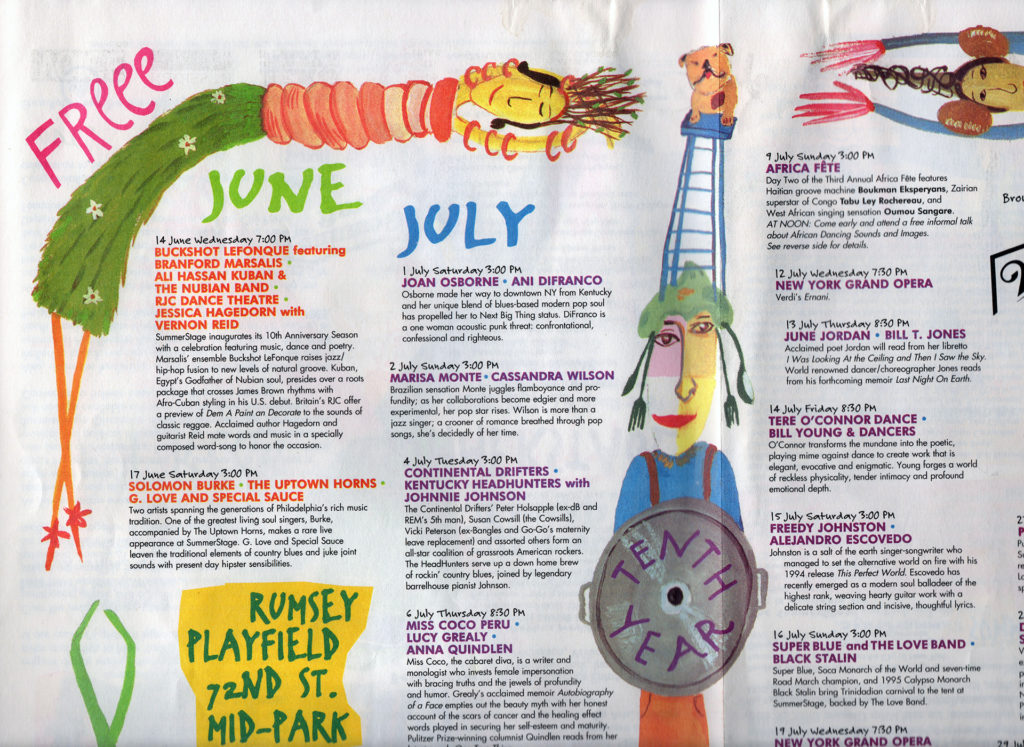 Another thing I remember about this gig was that it was part sponsored by Sony who were showcasing their new MiniDisc system and had a couple of booths around where you could have a listen. There were people all over the arena with blankets stretched out and picking your way through was tricky. At one point a woman shouted at me because I stood on her blanket and I do believe she learned some new English words that afternoon!

G. Love played a great set which seemed to be so right for the sunny afternoon. I saw them again just over a week later at Glastonbury and they remain to this day the only act I have seen on both sides of the Atlantic! There’a a recording here if you want to have a listen! The set list is at the bottom of the page but the taper says he arrived late so has no idea how much he missed so it may only be a partial set list. 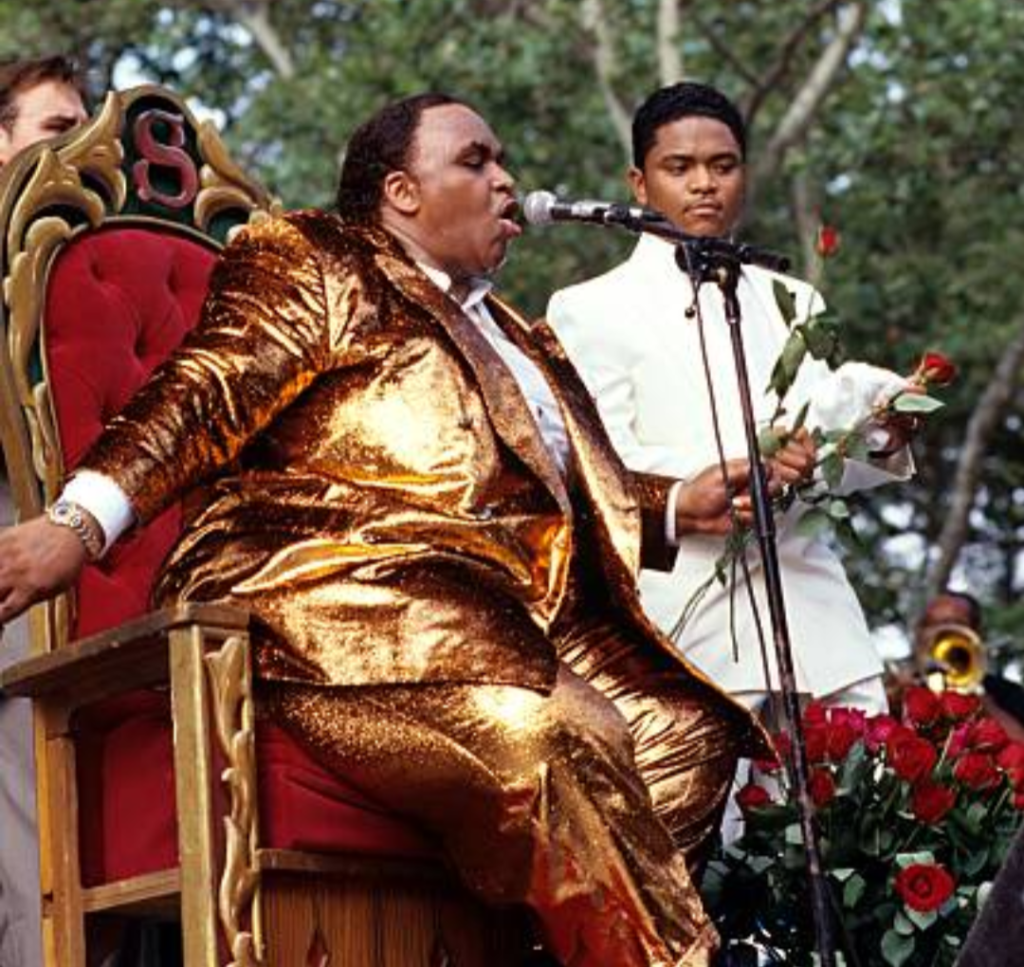 I thought I’d stay a while and catch a bit of the other band and when they came on Soloman Burke (who was a big guy) arrived wearing a gold lame suit (on a red hot day) and was carried onto the stage in a throne. Soul has never been my favourite genre of music so after a while I was contemplating heading off and as I walked across the arena I thought I heard someone calling my name!

You know what it’s like – your thousands of miles away from home in a strange town and you hear your name being called – it’s just a coincidence right! then you hear it again and you just turn to see if it is you they are calling for. Then to my surprise I discovered that it was me they were shouting at! It was a couple of the guys I’d met in the pub in Greenwich Village on the Friday night when I had met up with my internet friend. So I ended up staying till the end of the show, drinking beer and chatting while watching Solomon Burke do his stuff! Afterwards we went for something to eat and then they gave me a lift back to the hotel but I declined going with them to their neighbourhood  bar because I had to be up early the next morning to catch a flight back to the UK!