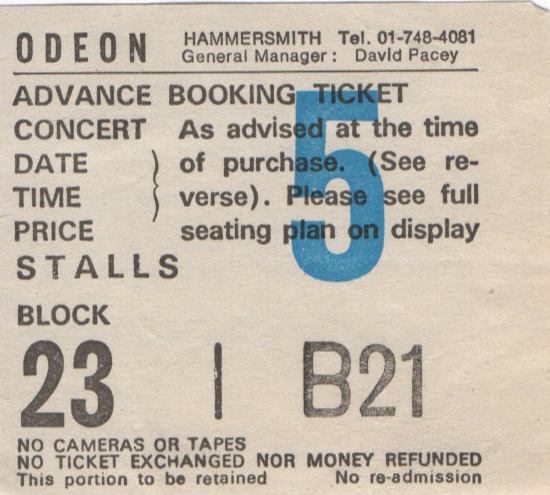 I first heard of Suzanne Vega when I heard her single Marlene on the wall on Radio 1s Saturday afternoon show a few years earlier. I bought both her first eponymous album and her second Solitude Standing almost as soon as they were released so I was looking forward to seeing her at the Hammersmith Odeon even though we only had tickets at the back of the balcony.

The only problem was that my wife’s father died about ten days before the concert. We headed up to Sunderland for the funeral which took place on the Saturday morning. I think when we left we didn’t know when the funeral would be so I had left the tickets in my desk drawer at work in case we didn’t get back then one of my friends could have used them. As it was my wife decided to stay in the north for a few more days to be with her family but I had to get back to go to work (and of course the concert)

I had a spare ticket and on the way to the gig I considered what to do with it. When I got there I spotted a tout outside and went up to him (the only time in my life I’ve ever dealt with a tout) and was about to ask if he was interested in swapping the two tickets I had for a better single ticket. I only got the first part of that sentence out before he called his mate over. They gave me a ticket which as far as I could see was in row B. I was so convinced that it must be a fake that I headed straight for the door to go in just to make sure it was genuine! I still spent most of the night expecting someone to turn up and say I was in their seat. The chap next to me had the same feeling as he had done the same thing but he’d managed to get a bit of cash out of them as well but he’d had better tickets than me!

It was a great show made even better by having such a good seat and feeling as if Suzanne Vega was singing straight at me! in order to make amends to my wife I went out at the first opportunity and bought two tickets for the newly announced shows at Regents Park open air theatre in June.