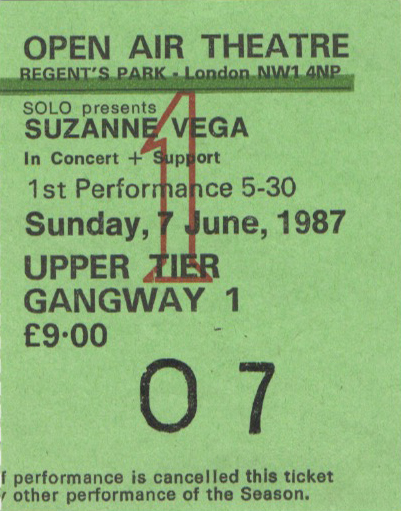 As my wife had missed the Hammersmith Odeon gig because of the death of her father I bought us tickets to see her in one of two shows at the Open Air Theatre in Regents Park. There were two performances and I went with the first one which started at 5:30. There was a weird support act who we think was trying to do some comedy but it was so out there that it fell flat with the audience – his name was Vic Reeves, wonder what happened to him!

I honestly can’t remember if Suzanne Vega performed sol or with a band – the only thing I can find on the net would suggest she was solo! I do know that as the set wore on the temperature dropped and we got colder and colder and we were so glad that we hadn’t bought tickets for the later show!