I’m not a great fan of the Sage if I’m honest – although I like the performance spaces the rest of it I find dull and insipid. Also it’s not easy to get to unless you park in their car park which is, obviously expensive! So I headed into Newcastle and this time I found somewhere to park down on the Quayside and the walked over the Millennium bridge to the Sage. It was just starting to get dark and there were some great reflections in the Tyne.

I’d got to the Sage a bit early for two reasons – the seats in the hall were unreserved so I wanted to make sure I got a good one near the front and also because there was a performance in the foyer at ten past seven. The gig I’m going to is part of the Tusk festival that I went to on the Sunday to see Nurse with Wound last year. I thought about buying a Sunday ticket again this year but in the end decided just to buy a ticket for the Terry Riley portion of the show. However there was a free performance organised which was called Double Bass Crossfade. This consisted of two people playing Double basses starting off at opposite sides of the hall and then advancing, passing each other and continuing on to the opposite side playing all the way. The sound came out of several speakers placed at various points around the concourse and the audience was encouraged to move around to get the full effect! 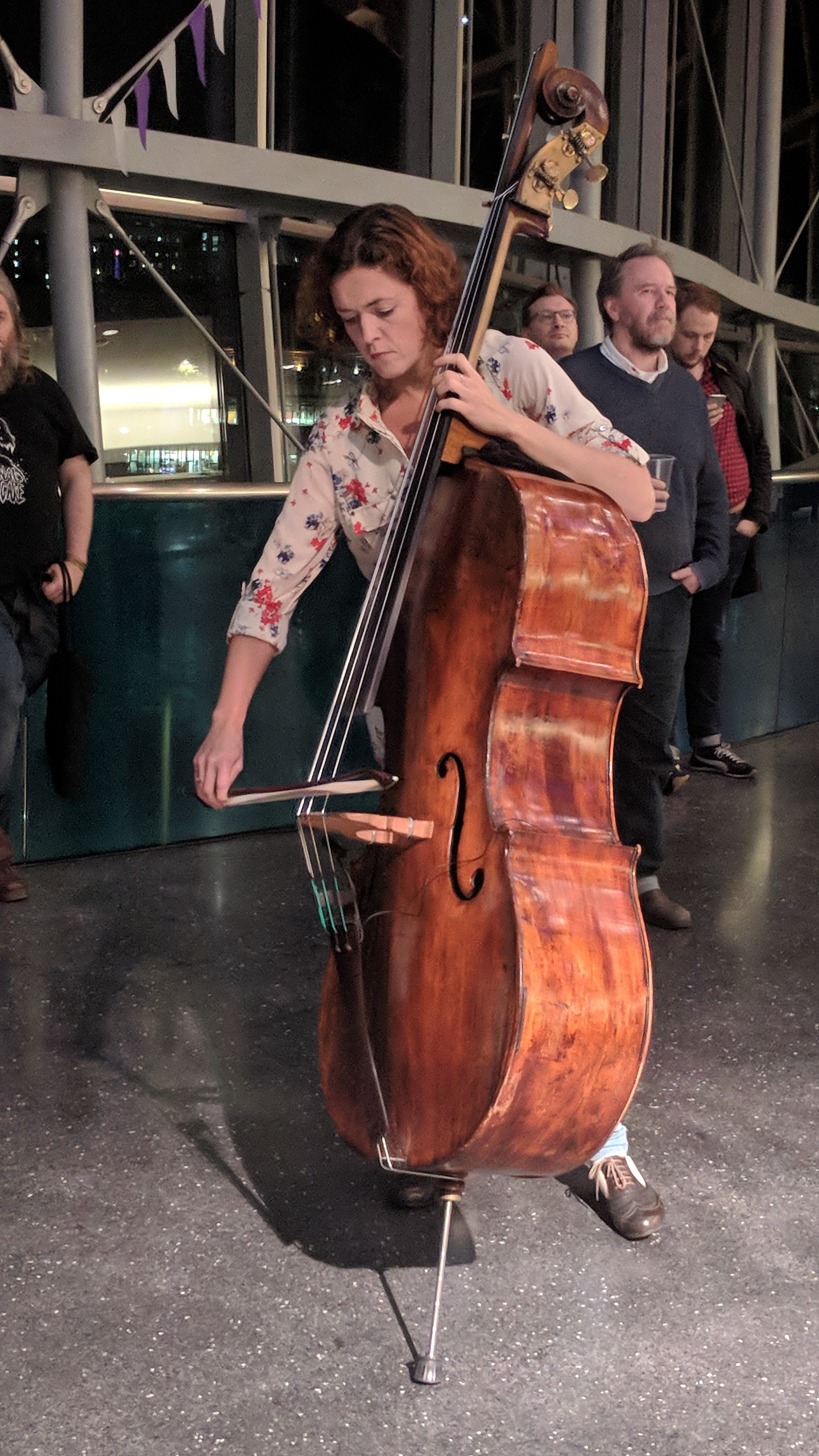 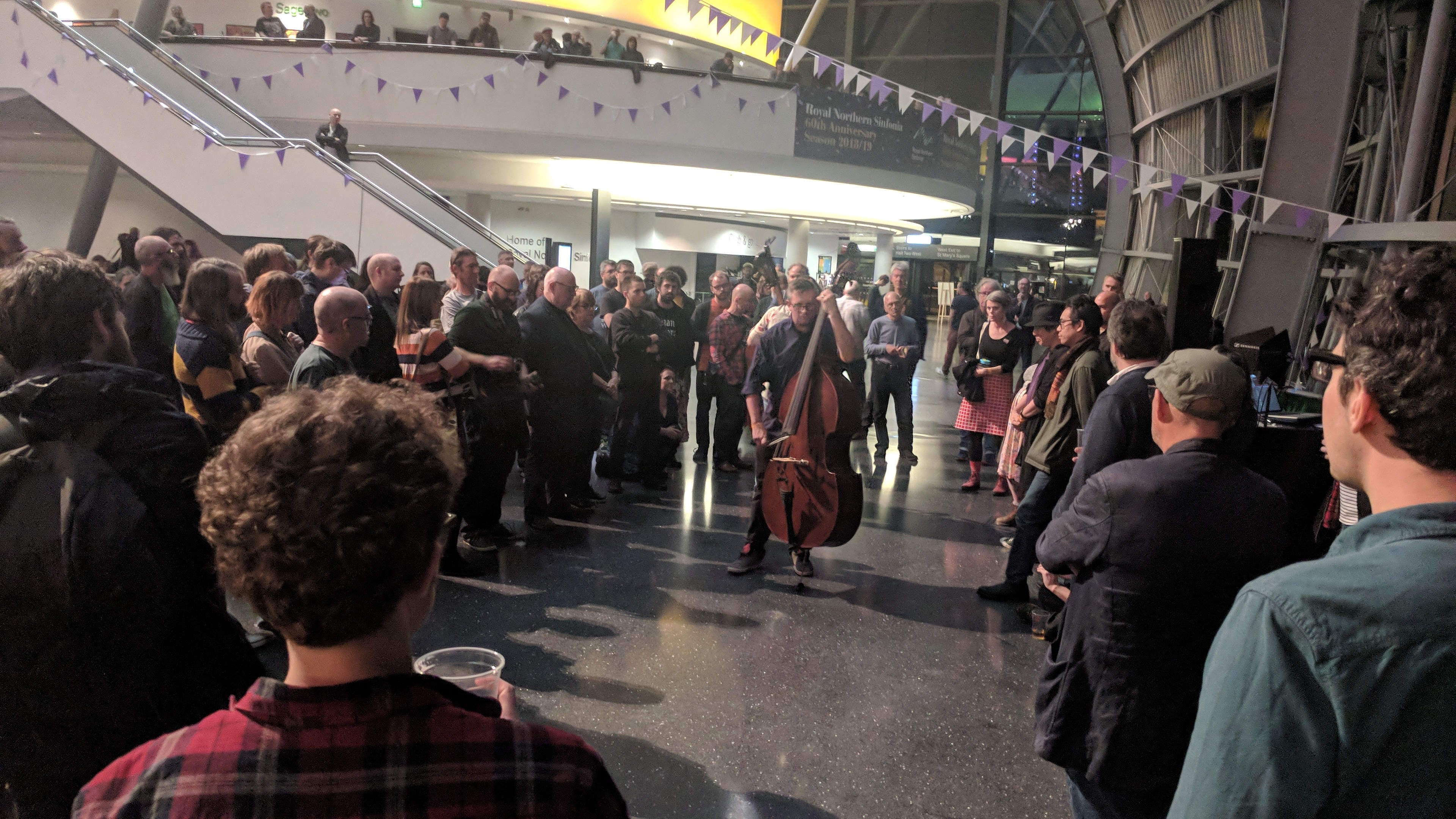 If I’m honest it wasn’t as impressive as it sounds when I described it so towards the end I headed upstairs to be ready for when the doors to Sage 1 opened. The man on the door said that he wasn’t allowed to open them until the performance finished so we would just have to “endure it!” When the doors did open I was one of the first in and I headed for the front and picked out the seat that gave me the best view of the Steinway that was sitting on the stage! 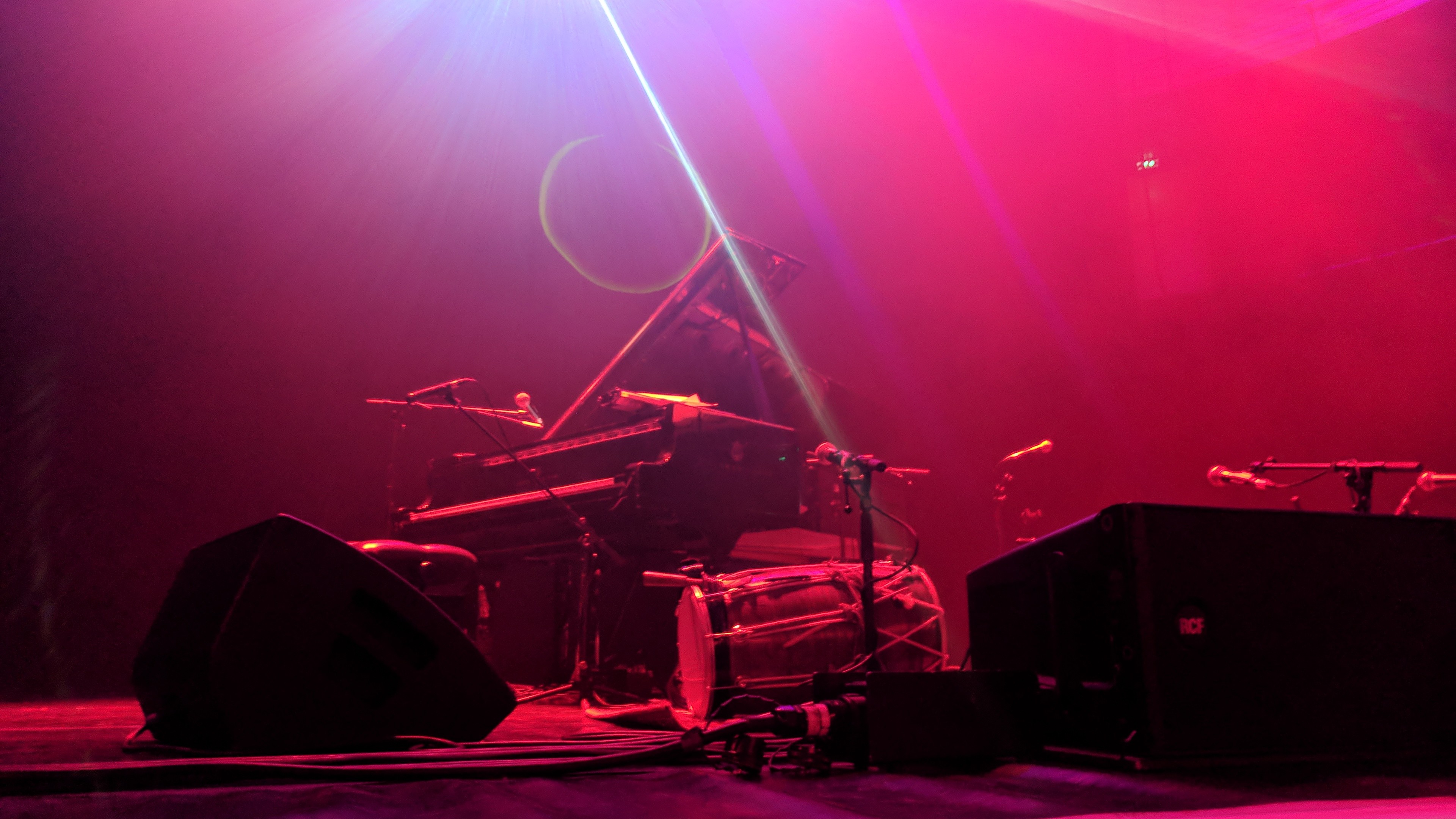 I remembered from last time that they have fill in speakers across the front and also monitors which was going to be a bit of an issue for the support act as it was obvious from the microphones that they were all going to be sitting down! The original support act were Moroccan musicians Maalem Houssam Gania but they had had to pull out due to visa issues – something that has been happening a lot under our “wonderful” right wing Government! They had been replaced by Hameed Brothers Qawwal and Party who also looked very interesting and indeed they were! 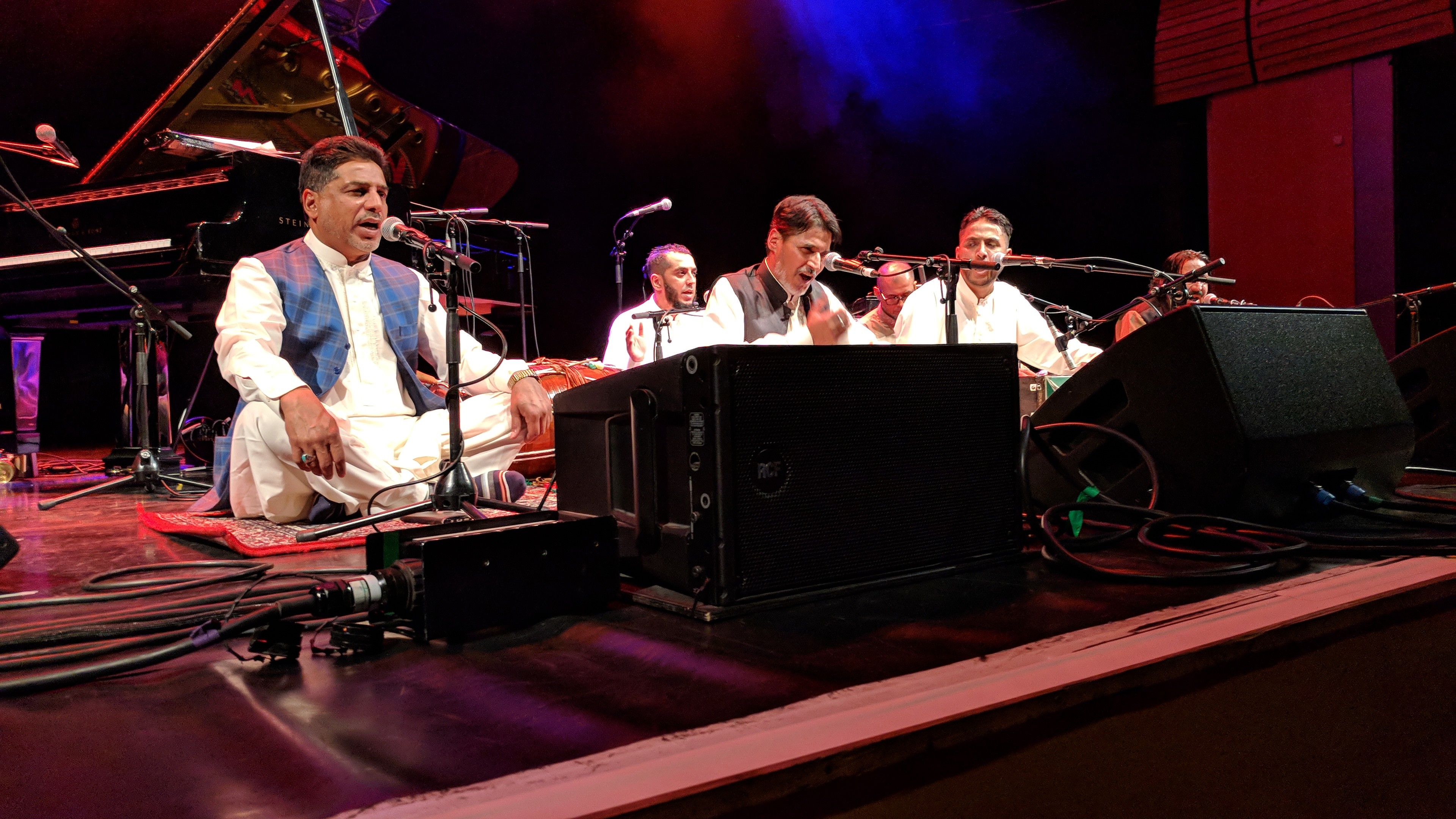 Sitting crossed legged on the floor playing tablas, harmoniums etc they sang and played some wonderful Asian music. The older guy who did the most singing had me worried as he didn’t look well at times, holding onto the harmonium next to him and appearing to spit into a scarf. If he was unwell then it certainly didn’t show in his sining except occasionally when he would stop and one of the others seemed to fill in! 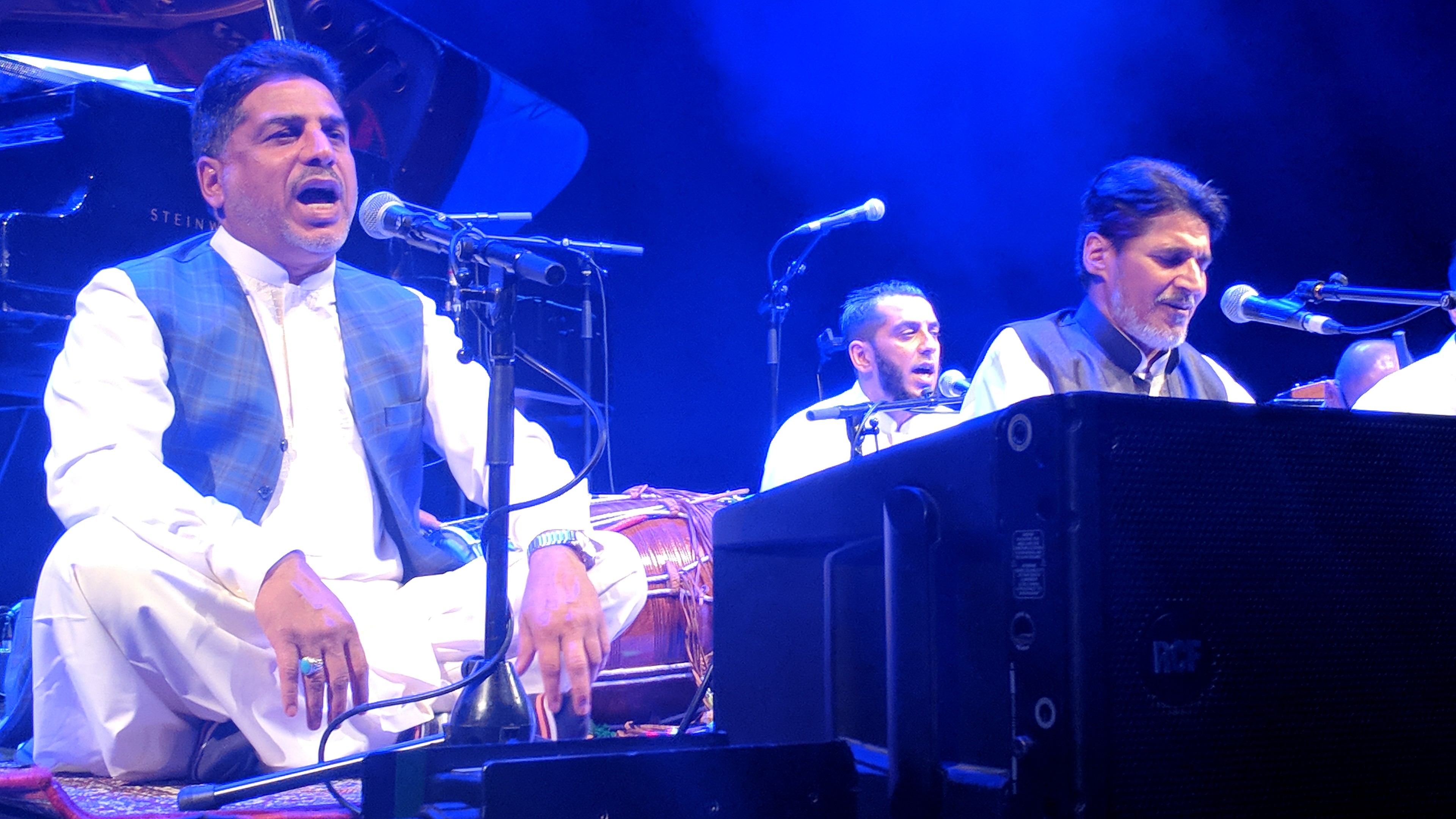 About halfway through their first song I saw out of the corner of my eye some movement at the end of the row and realised that Terry Riley and his son Gyan had just appeared and taken their seats to watch the support act! They stayed for the entire set only disappearing backstage as the band took their bows at the end! 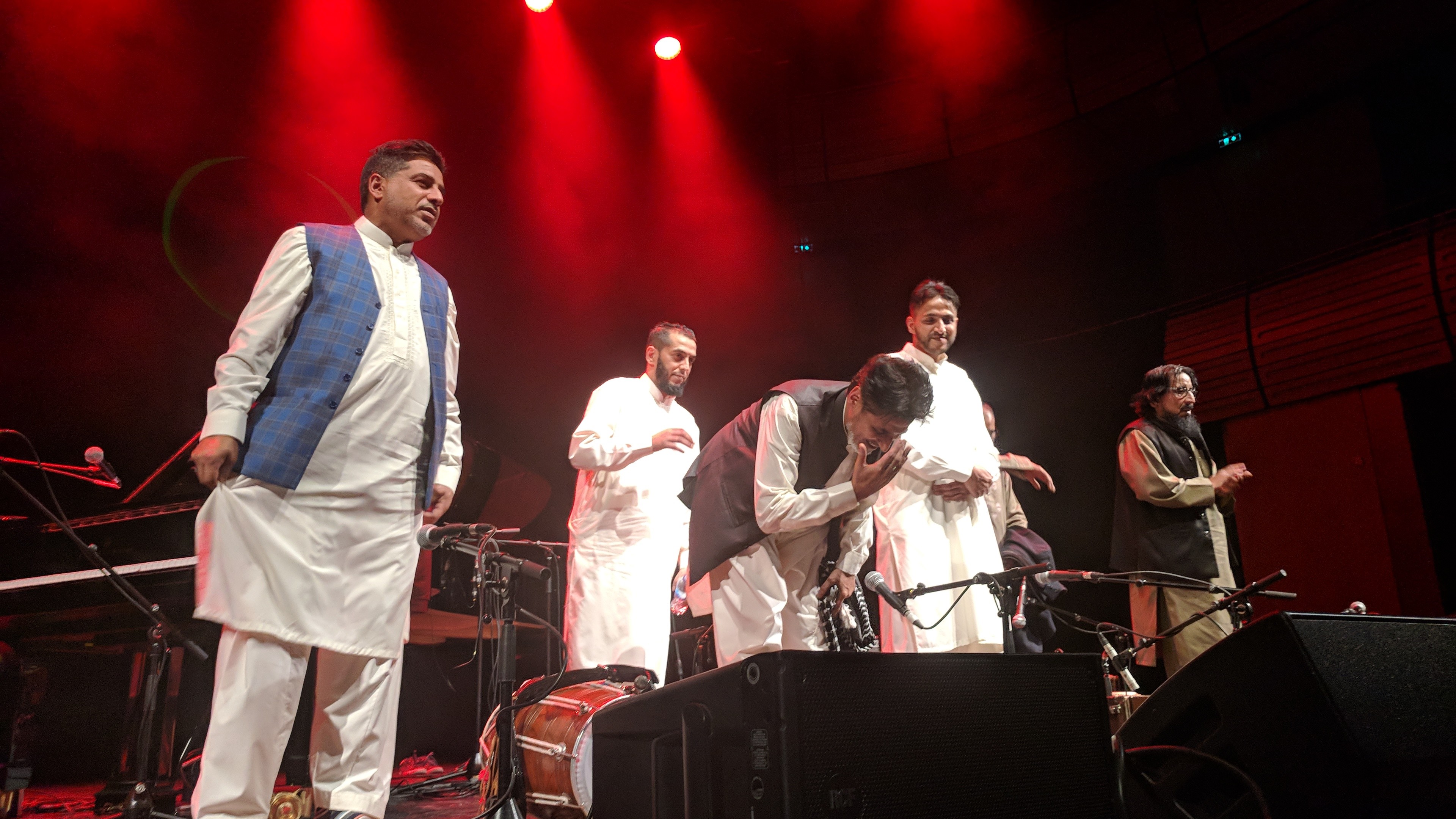 There was a short break while the techs moved the support band’s stuff of the stage and reset for the headliners. The four seats next to me emptied and I wasn’t sure if the occupants were coming back. I was asked to move along one seat but was hesitant to do so in case they did and explained that to the person who asked. The real reason, however was that I had chosen this seat specifically for the view of Terry Riley’s piano and I was buggered if I was going to move to a seat with an obscured view for someone who had just turned up! 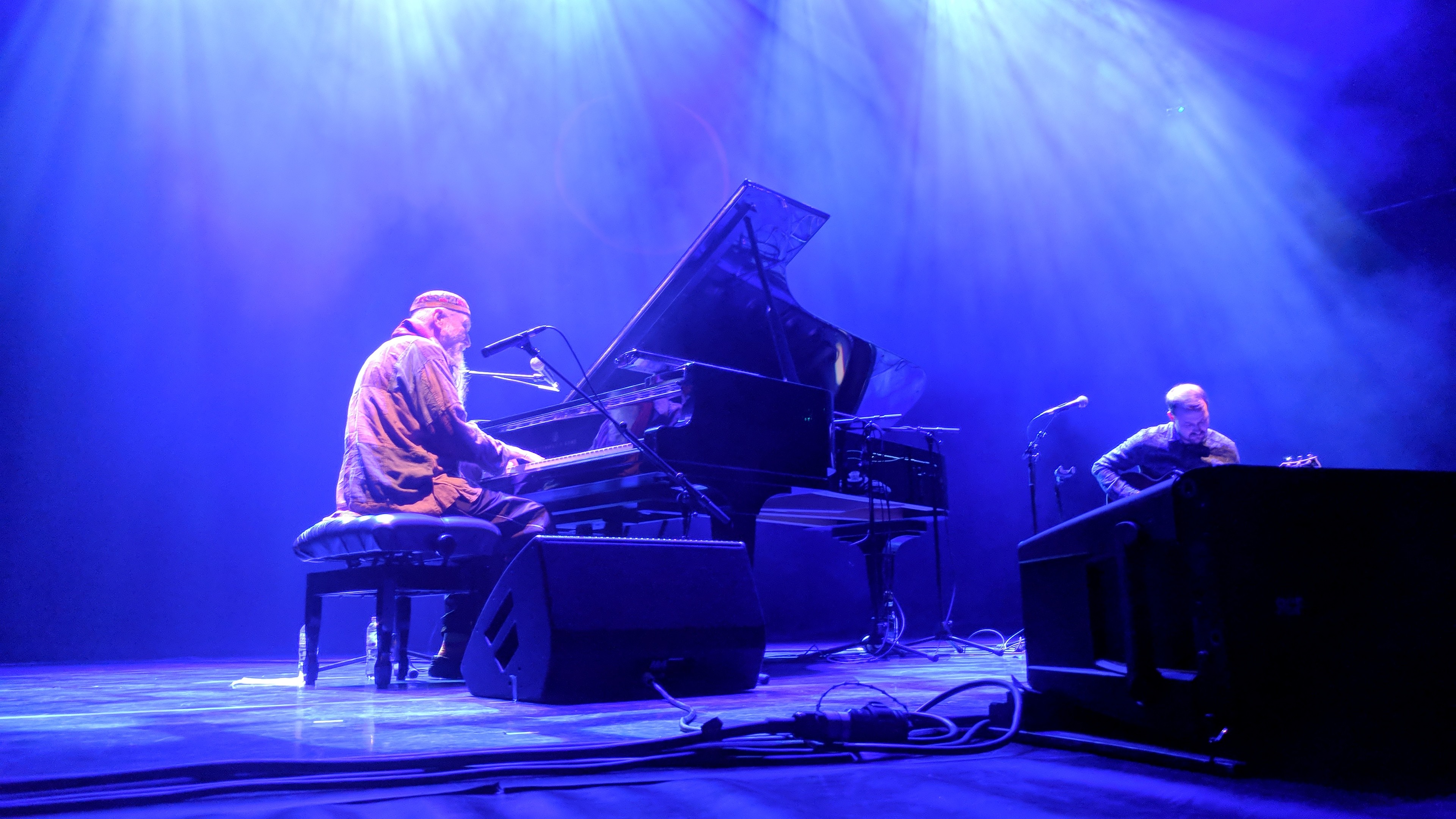 After about ten minutes ro so the lights went off and Terry Riley and his son came on stage. They played some sublime music – mostly with Terry playing the basic rhythm on the piano and Gyan playing guitar over the top. It worked really well because you could become entranced by the piano sections and then suddenly you’d be jolted back to the sounds coming from the guitar. Most of the songs had a very jazzy feel to them except for one right near the end which included spacey electronics and samples triggered from what appeared to be an ipad inside the grand piano! 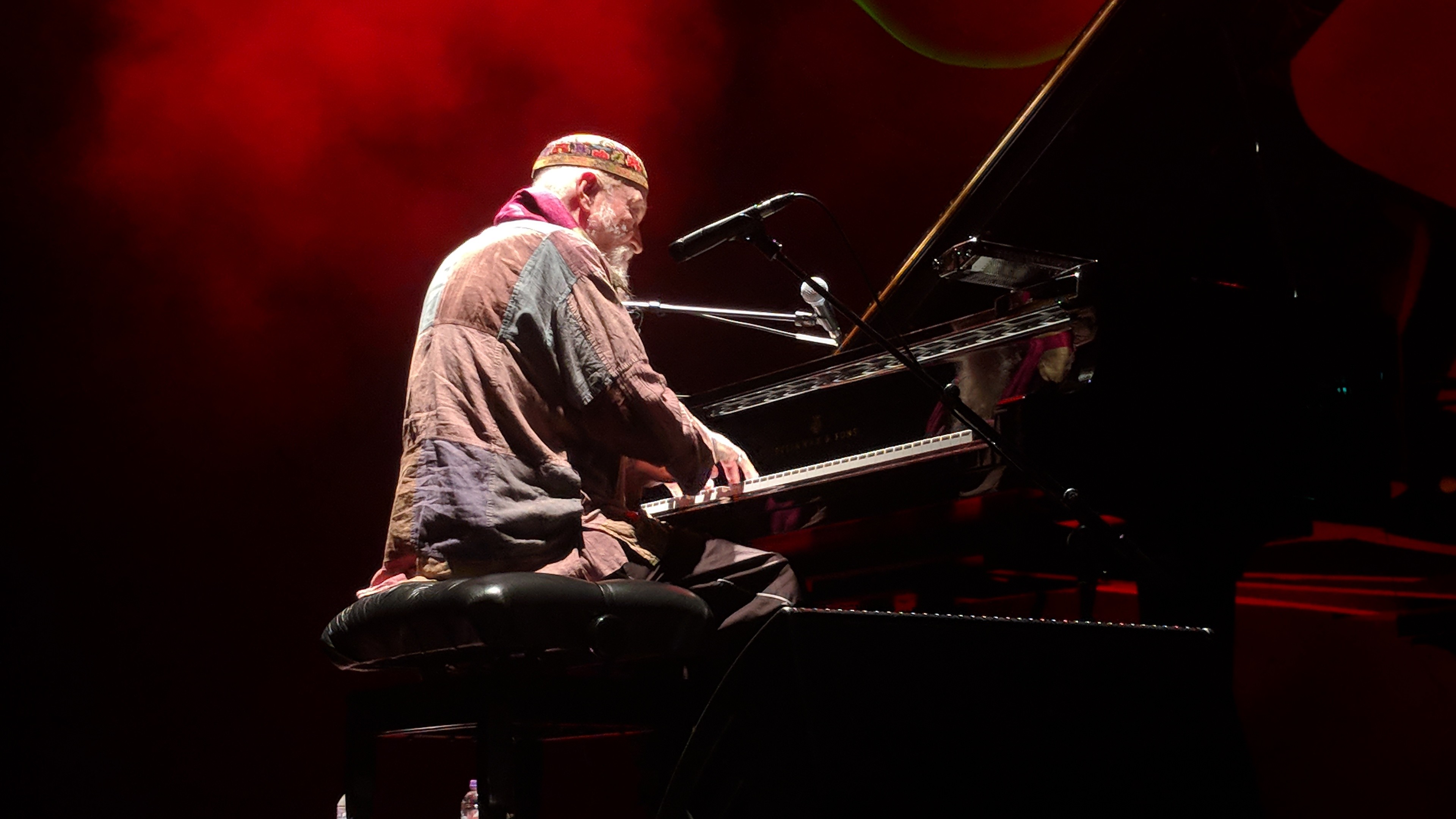 For most of the evening Terry had his back to us but I didn’t mind because I love watching people playing instruments. At one point I felt like I was sitting in his living room watching him play because it felt that intimate! About half way through my wonderings about what was sitting on the piano were answered when he turned around and picked up a melodica. At least now I got to see him! 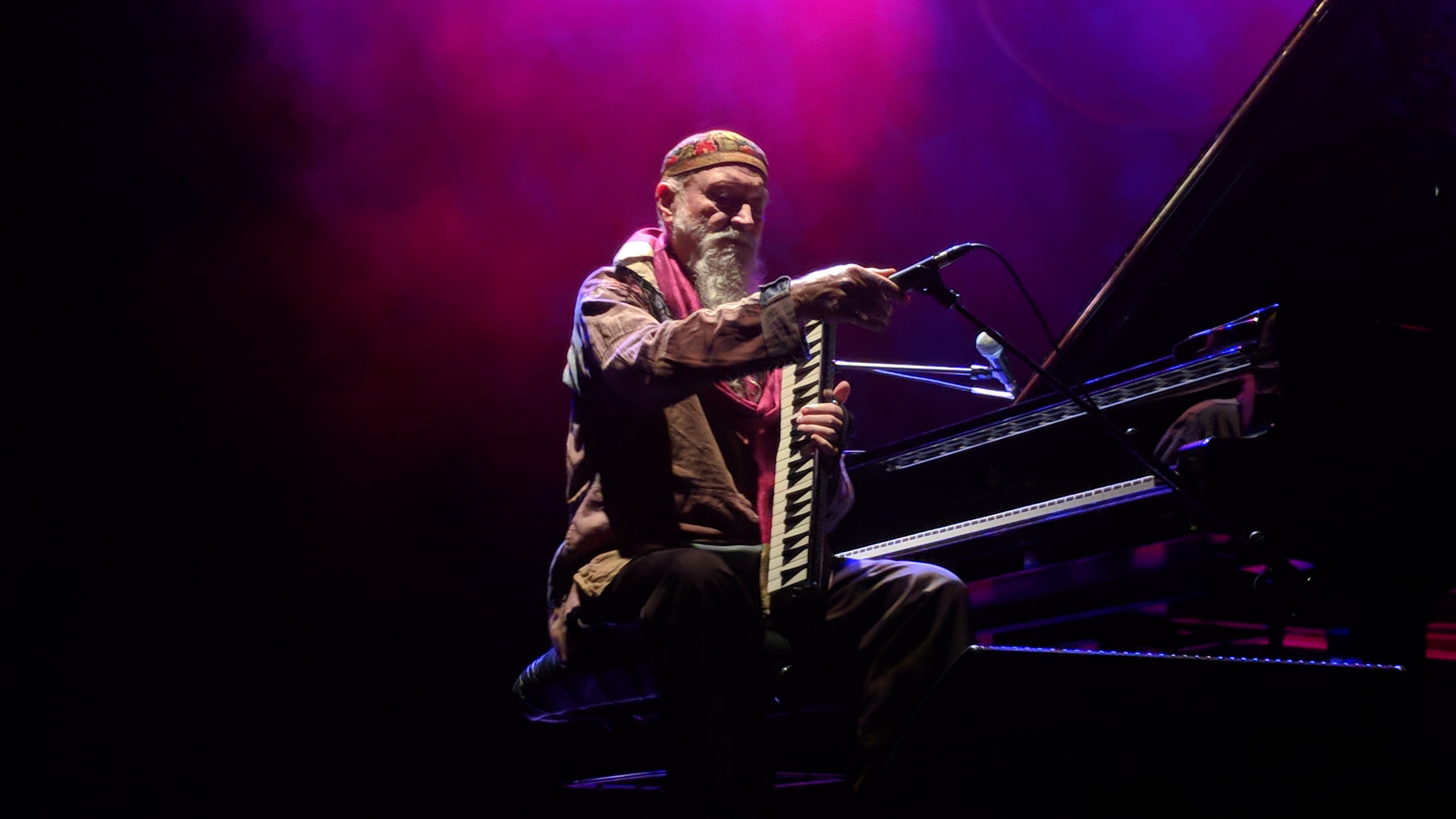 I did wonder how much I was actually hearing was coming out of the PA system and how much was just the ambient sounds from the stage. I think this was most noticeable when he was doing the electronic section as those sounds seemed to come from somewhere else – I’m not even convinced that anything was coming out of the fill speaker on the stage to my right and I would have happily lost it for a better view of Gyan! I didn’t manage to get many pictures of him because of it! 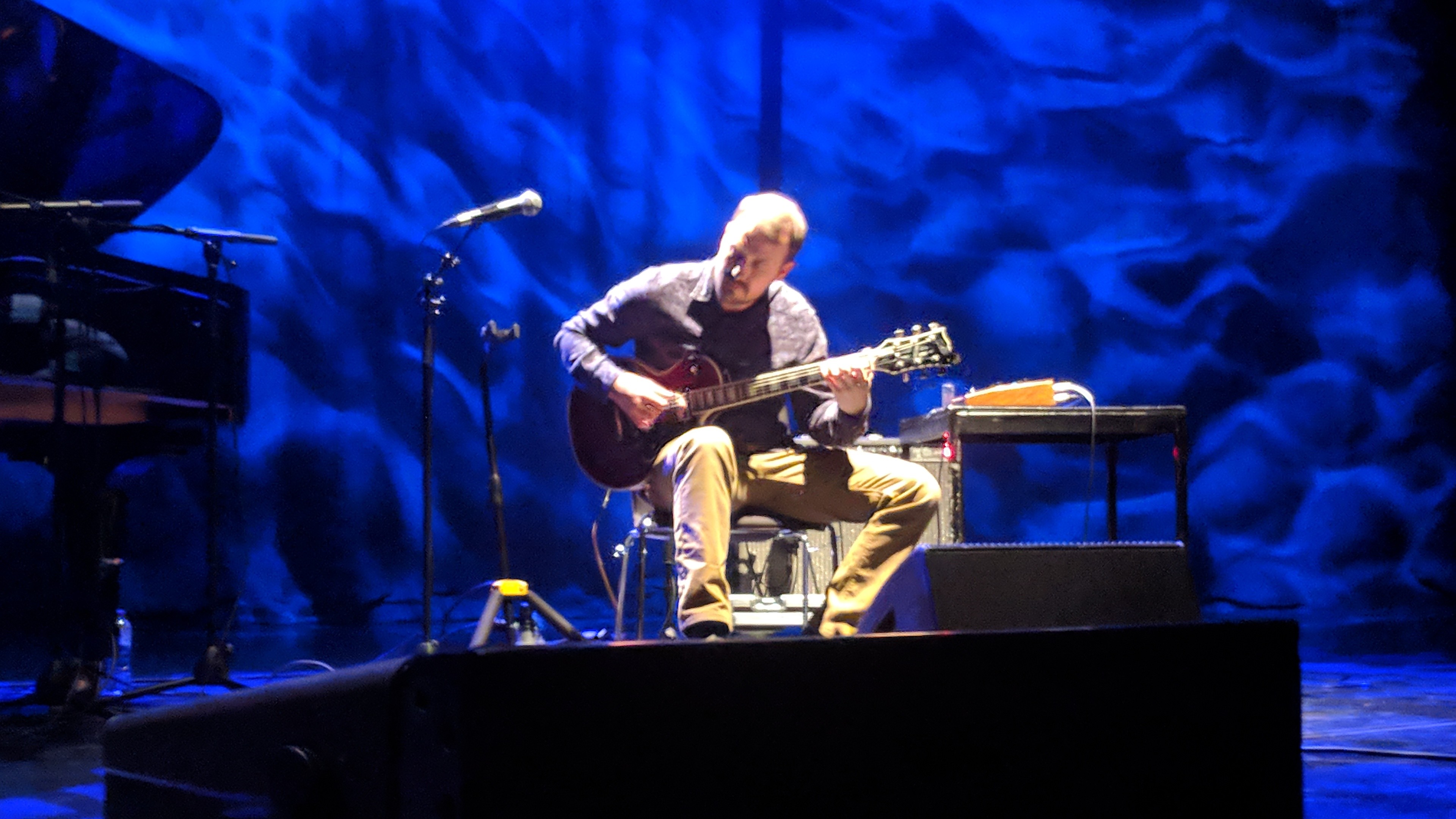 It was all over far too soon. I mused on this later because I’m sure the reviews I read suggested that for most of his shows he did two sets and obviously played longer. In the pictures of those shows there was also an electric keyboard next to the grand piano! This is the second time I’ve seen someone I wanted to see and felt that in order to fit into the schedule of a music festival the set has been truncated. Still if I get to see the likes of Terry Riley and the Sun Ra Arkestra in Newcastle and this is the only way then who am I to complain!. 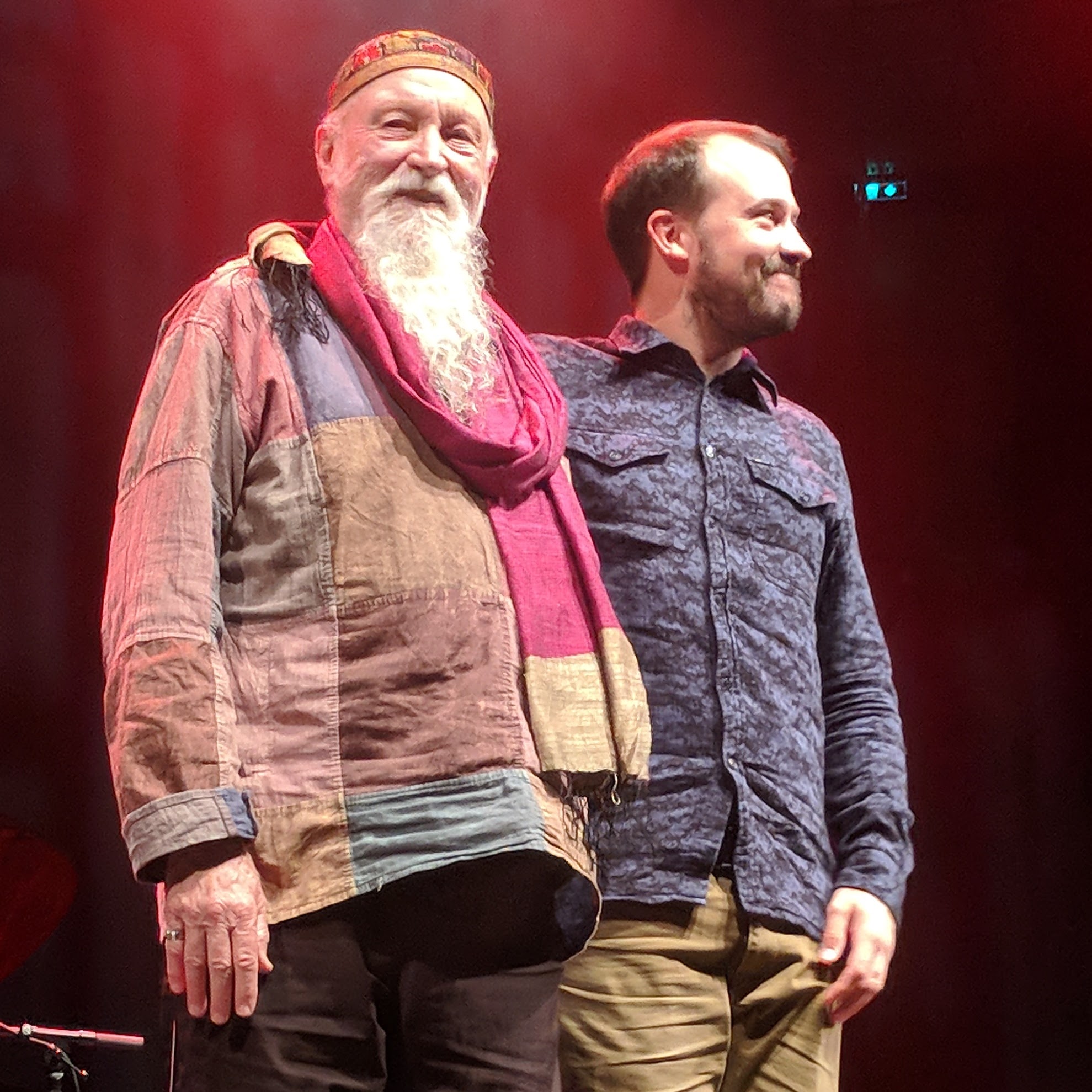 After they finished playing they came to the front of the stage and took a bow. The crowd started to shout for more but the houselights came up. It was just after ten o’clock and they’d only played for an hour! Still I had enjoyed every second of it and when I turned around I discovered that the support band had been sitting watching Terry Riley which made me smile! Even though I had to walk back over the bridge to my car I was back at the house before 11! On the way home I mused that if I didn’t have Sarah to say things like “you’re not wearing that!” then I would probably dress like Mr Riley – he is 83 though so there’s still plenty of time! 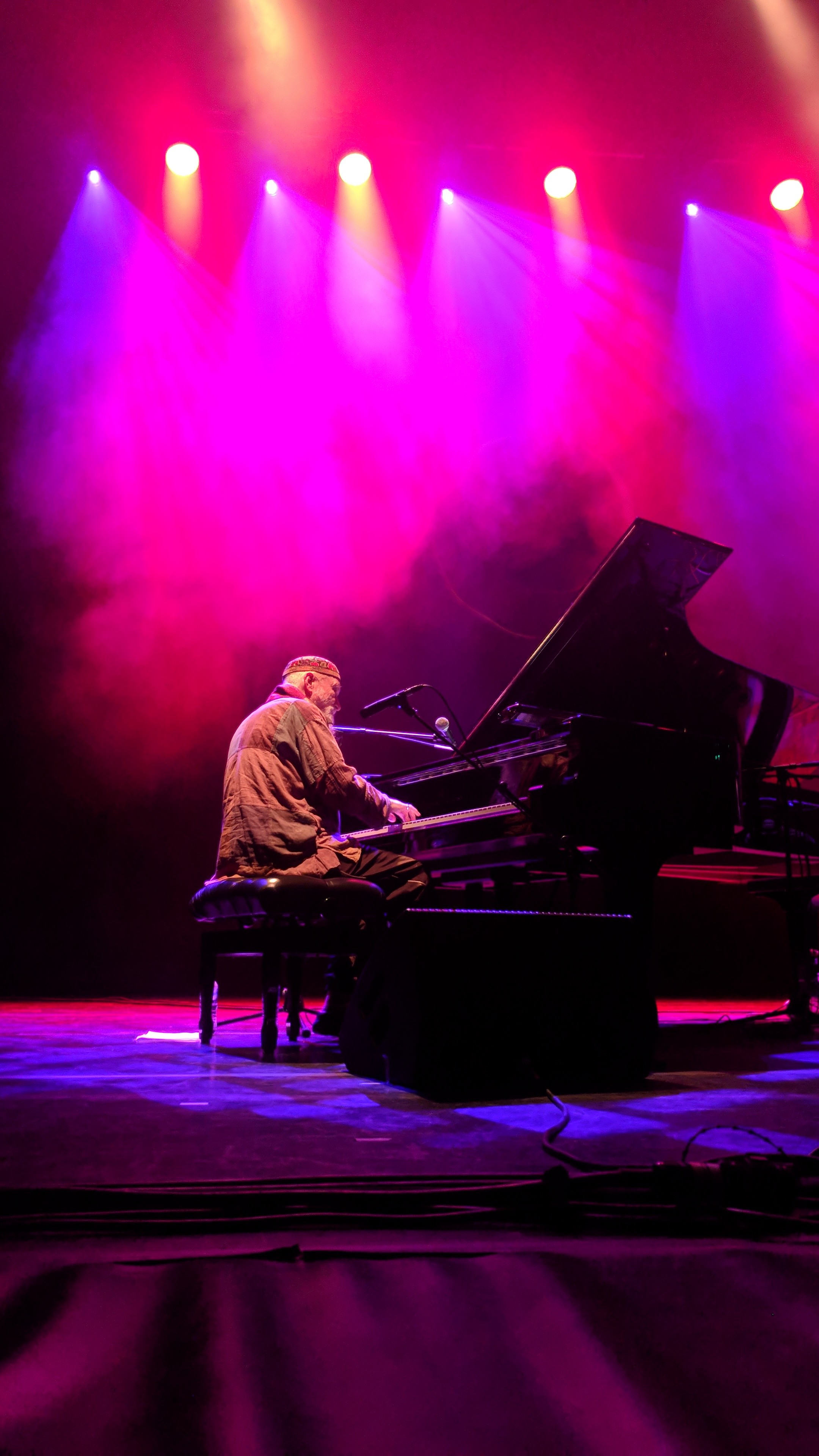