What a long strange trip it still is! 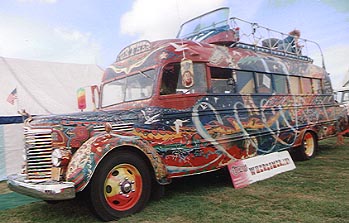 In 1964 Ken Kesey and a bunch of friends, who later became known as the Merry Pranksters, set off in an old school bus, painted in psychedelic colours, to cross America. The bus trips spawned the Acid tests, the Acid tests spawned the Grateful Dead and so the Sixties as we know them were shaped.

Thirty five years later as the 20th Century draws to a close Kesey once again took the bus furthur (although this was a replacement – the original would be 60 years old and is sitting rotting on Kesey’s farm) on the road. This time the Pranksters set sail for England to view the total eclipse and to search for Merlin who Kesey believed would return before the Millennium. 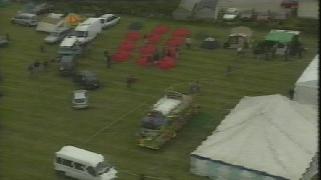 Our first sighting of Kesey and the Pranksters was at the Minack Theatre in Porthcurno, Cornwall the day before the eclipse. We drove for nearly 2 hours from our campsite near Helston to cover the 20 miles or so to Porthcurno. As we got closer the lane narrowed and narrowed and it was hard to see how they could have got Furthur up the hill to the theatre. Once we got past the traffic queue waiting for the beach carpark we climbed the hill and just as we got to the summit we spotted the bus.

The bus was a riot of colour set against the traditional green of the English countryside. It was surrounded by a makeshift village of tents and caravans including the very impressive Channel 4 formation camping club! We parked our car in the Theatre carpark and climbed over the fence to go and see the bus. I started to take some photos of the bus and I could see Kesey and Babbs through the windows of the bus. The bus itself was behind a cordon so that we couldn’t get near to it. 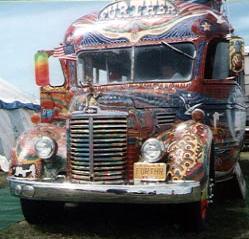 “We were definitely off the bus!”

We hung around for a bit and then wandered off to look at the views from the cliff top. Leaving the camp we went down to spend the afternoon on the beach below. Occasionally we would spot one of the Pranksters on the beach but finally we headed back to our campsite pleased to have seen the bus but disappointed not to have been able to interact with it’s occupants. 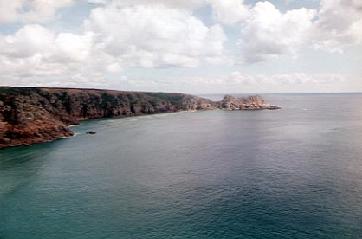 Something is happening here but you don’t know what it is…do you Mr. Jones? 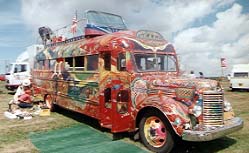 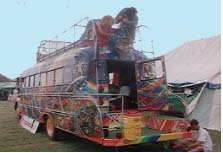 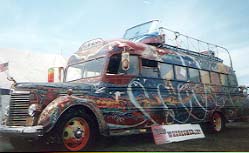 The search for Merlin 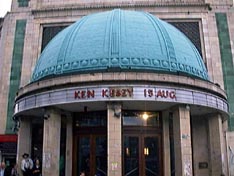 The Where’s Merlin website said “Bring hooters” so me and the kids sorted through the music box and found a whistle and a small harmonica I could put in my pocket for the show.

The venue, which is normally a standing venue had been laid out with seats tonight. The audience was an assortment of heads both older Deadheads and next generation hippies.I stood in the queue to get a ticket only to find they didn’t accept credit cards or cheques – only cash!! Luckily I had enough but had to go and find an ATM before I could go inside. 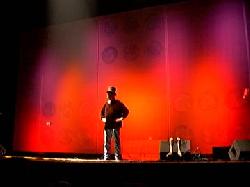 The show started with Kesey coming out onto the stage with his top hat and boom mic and standing in front of a white curtain and telling a story about a squirrel kicking a bears butt, with audience participation, before he announced it was time to see the bus. The curtain went up and revealed the rest of the stage. In the centre was a throne, on the left of the stage was Furthur and on the right the “Thunder Machine” and the band. He then introduced the next section which was a performance of Where’s Merlin?

The play started with Mordred’s head being placed on the throne before Kesey introduced the characters from the Arthurian legends such as Arthur, Lancelot etc who were played by the Pranksters including Babbs, Mountain Girl and Anonymous. The play rambled on through technical difficulties until Mordred’s head came to life. It’s re-incarnation being proceeded by the question “Who would want an Ugly Dead head?” 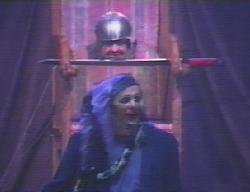 The play ended with the spirit of Merlin coming to life inside the “Thunder Machine”. This was a psychedelic machine with a hole in the centre in which there was a Grateful Dead like skeleton for which Kesey provided the voice. 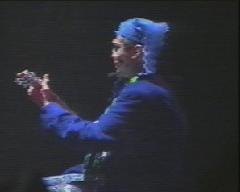 The whole cast then broke into song with “Love Potion No.9” which then descended into a huge jam. I was getting really frustrated at the audience at this point because I felt we should be up and dancing but I also needed to piss! A chance came as Kesey struggled to get his theremin to work so I ran to the toilet.

When I came back I dashed to the front, if people weren’t going to dance then I was going to make sure the Pranksters could see I was enjoying it! No sooner had I got there than Kesey told us to get up onto the stage and I was the first one up there. 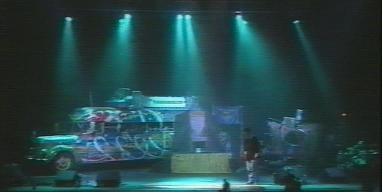 “We’re working as hard as we can to bring the only message there is and it’s the same message it’s always been…..it’s love.” 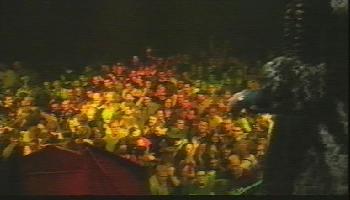 Soon the whole stage was full of people grooving with the jam, I wandered around blowing my whistle and harmonica (which made Anonymous laugh but pissed off the fool with the guitar!) and having a great time. Kesey wearing a hat with a weather vane on it started a speech the gist of which was “All you need is love” although I couldn’t hear very well as the on stage monitors didn’t carry his voice. Luckily I found this film of it on youtube

We soon had to leave the stage (for insurance purposes apparently) which we did as the bouncers looked as though they’d have given the Angels at Altamont a run for their money! Ken continued with a story about his son who died and then went on to trumpet the value of poetry before the finale (“The sixties aren’t over until the fat lady gets high” he said quoting Garcia) 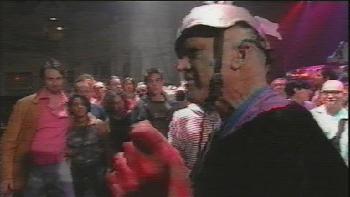 The finale included Magic Bus and Gloria although Kesey did quote from Trucking changing the last line to something like “What a glorious trip it still is”. The Pranksters grandchildren were on hand to kick balloons into the audience and the band jammed the show to a close. We shouted for more but it was not to be, much to the disgust of the guitarist (who bore a striking resemblance to Trey from Phish!)

Outside we waited for Kesey who had said he would meet us and sign autographs. The stage door opened and out he came wearing a pixie hat made from the stars and stripes. Babbs asked the venue if he could sign autographs in the foyer but this request was refused so Kesey lay down on the pavement and signed copies of “One flew over the Cuckoos nest”, tickets and posters (a bargain at between £10 and £20 – $15-30).
The Channel 4 camera crew who were following the Pranksters on the tour came and video’d the signing, if they had used the footage they shot I would have been on TV as I was sat right behind Kesey and even dared to ask him a question! 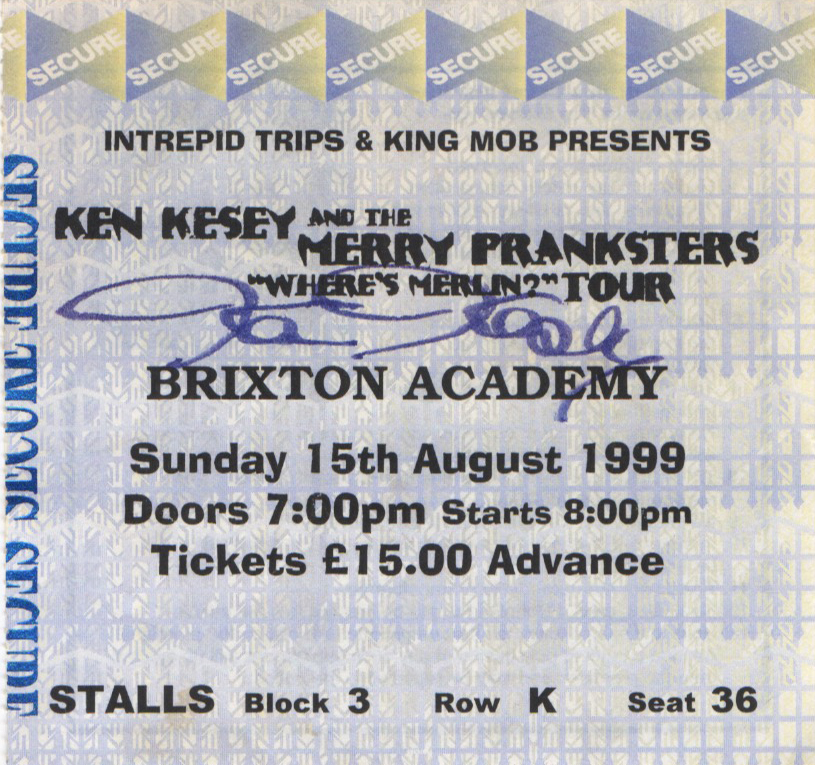 The previous week during the eclipse in Cornwall a party of travellers were attacked by police in riot gear for holding a rave on a piece of land. I asked Kesey what he thought of this happening to people who were basically doing the same thing as he had done in the 60’s.

He confessed that he hadn’t heard about it but said something like “There are times when you have to give in and let authority thinks it’s won because there are so few of us we can’t afford to lose any”.

With that he signed my ticket and I stepped aside to let someone else in. As I walked from the venue I noticed the Police searching 2 people for drugs – Plus ca change… 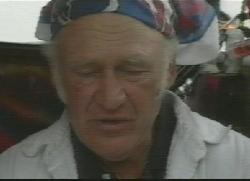 “We’re the psychedelic warriors of today”

Sadly Ken died not long after I wrote this, the day he died was 10 November 2001 when I was out with my Eurotrader friends watching the European premiere of Grateful Dawg. I am so glad that I got to meet the man even if I only got to spend a brief amount of time in his presence. The things he said that night still stick with me as do his writing and recorded ramblings. I know I don’t have the words to do justice to the man so I will leave that to someone like Robert Hunter.

One stood in the moonlight, One stood out in the crowd
One stood under star blue sky his daydream turned up loud.
Some folk come to stir it up and when its stirred they split – simple as that

This was originally published on my website in 1999 – I will try and find better copies of some of the pictures at some point!