A night out in NYC

I was working over in America for a couple of days with a show in Boston and then one in New York. As my flight would be significantly cheaper if I stayed a Saturday night I convinced my boss to let me use the money I would save to have a couple of days in New York City which I did. I flew into Boston, went to bed, got up did the show which was on the 32rd floor of a tower block. I then flew down to New York, checked in to the hotel went to bed got up and did the second show. After that I had a couple of days off free to do what I wanted.

I had been told to buy a copy of a magazine which had all of the listings in and when I did I discovered to my horror that Bob Dylan and the Grateful Dead were playing in Rutherford the day I went home. I was gutted but there wasn’t anything I could do about it. I vowed to make sure I knew before I flew next time but this would be their last tour as Jerry Garcia died a few months later. I’ve often wondered if I would have enjoyed the show as nothing I have heard from that tour was very good. Another thing I remember is that there was a huge advert for a band called Phish that I hadn’t heard of before. Thankfully I now know I didn’t miss seeing them play that week either! 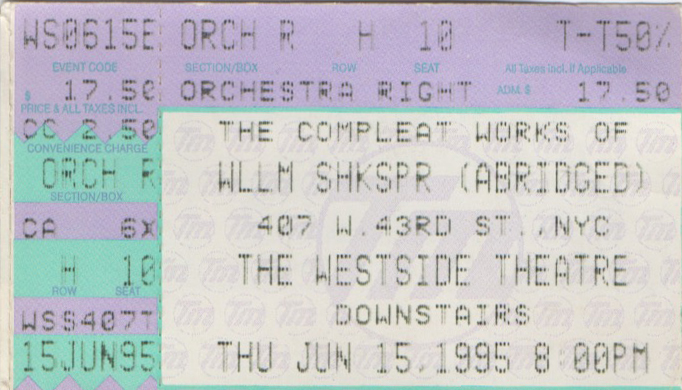 That night I set off to go and get something to eat in a Lebanese restaurant I’d heard about in a guide book but only got as far as the cut price theatre ticket stall in Times Square where I thought “what the hell how often will I get a chance to see something on (or in this case off off) Broadway so I went to see the Complete Works of William Shakespeare (abridged) where I got an extra laugh at the way they pronounced Warwickshire!

Afterwards I reverted to my original plan and went to that restaurant and then walked up to Manny’s Carwash Blues making sure my route took me past 53rd and 3rd, scene of the killing of Georgie from the Rod Stewart song*. I saw the William Clarke Blues Band before catching a cab back to my hotel!

*  My whole trip was soundtracked by songs inspired by the places I went – Walking down Madison, Killing of Georgie, On Broadway and every time I saw an NYPD Police car Fairytale of New York!