We were on holiday in Wales for a week and on one day it was decided that Sarah and Ben would go to this amusement park thing and then me and Teddi would go off and do something while they were there and then when they had finished I’d come back and pick them up.

About 30 years ago I had bought a copy of Janet and Colin Bord’s ancient sites book and my first wife and I had gone round most of the sites. A couple of days before we went away I remembered that Anglesey was somewhere we had not managed to get to so I dug the book out. So after I dropped them off I headed over the bridge and onto Anglesey!

The first place I was going to though wasn’t in the book – I’d found it on Google. It was the Brwn Gwyn standing stones but when I pulled up where I thought they were I found it was an iron age fort instead! Teddi and I wandered down the lane to find it. I thought I’d be able to see the stones from there but I couldn’t so I made my way back to the car. I drove a little way up the road and saw another entrance so I parked up there. I looked down the field but couldn’t see anything but after looking on Google I found that they were hidden in the hedge so I walked down the hedge and eventually found them!

From there I decided to go and visit the Ty Newydd cromlech but that was when I remembered how rubbish the directions in the book were. It said it was off a track from the main road but after driving around for a while I gave up and decided to head for the other set of standing stones on Holyhead. Rather than rely on the direction in the book which were vague I remembered that when I googled standing stones on Anglesey they had shown up on the map so I set the SatNav and drove there. When I reached the destination I was in Morrisons car park – I was somewhat confused until I looked up and found I was outside a pub called “The Standing Stones”!!

I looked at the book again and found the directions somewhat vague (it was 30 years old and SatNavs hadn’t been invented back then!) but I could tell from the map that the road it was off was the one heading for South Stack Lighthouse so I set the SatNav for there and after a few minutes I found the Penrhos Feilw standing stones in a field behind a house. I ended up not staying very long as there were two people and a dog in the field and although Teddi was ok with the other dog I took some photos and left.

The next thing on the list was some iron age huts just up the road so I jumped back in the car and drove up there. The directions in the book said there was a large car park opposite but when I got there it was quite small and quite full but I managed to get a space. I got teddi out and took my lunch and we crossed the road to find the huts. I have to say they were amazing considering they have been there for 2500 years. There were about 20 or so hut bases where the huts had stood. They were round houses and obviously would have had wooden beams holding up the roof. We found one and sat ourselves down to eat lunch wondering about the huts original occupants and if they had eaten their meals in the same place!

We returned back to the car and as we did I saw that there was a cliff top walk. I looked and it said that it passed a tower used by the RSPB, the lighthouse and an Iron age fort. So we set off along the track towards the cliffs. I hadn’t gone far when Sarah rang to say they had finished. I told her it would be 20 minutes before I got back to the car and then another 30 minutes to get back to her. She said that was ok as she was desperate for a cuppa! I continued to walk and I was glad I did as the view of the lighthouse was spectacular!

I had to skip the iron age fort though – maybe next time! I headed back to the car and then drove into Holyhead and picked up the road that headed back to the mainland. I had missed all of the sites on the other side of the island and the chance to see Llanfairpwllgwyngyllgogerychwyrndrobwllllantysiliogogogoch – but I did feel that the latter was one I should mention to Sarah because I think she would have been annoyed if I had gone there without her!

It is a circular clay and gravel bank covered with grass, still some 1.5m high and revetted externally by stone walls, which surround a level area some 54 metres in diameter. Its name means “White Hill Castle”. The original use is unknown but it is thought to have been a religious sanctuary. The earliest bank and ditch belong to the end of the neolithic period (2500-2000 BC).  During the Iron Age, the present wall was built, and it was refortified in Roman times and later 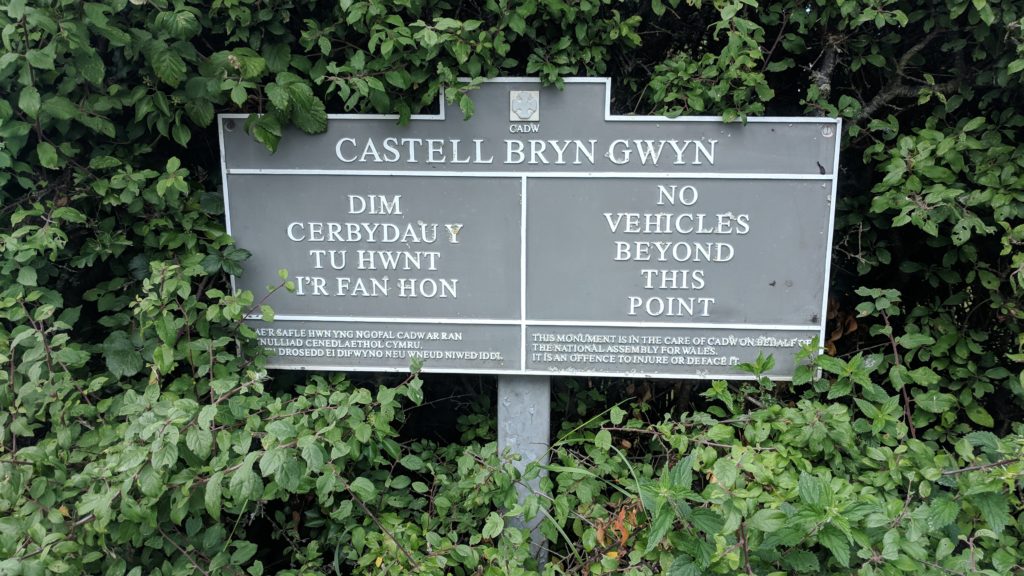 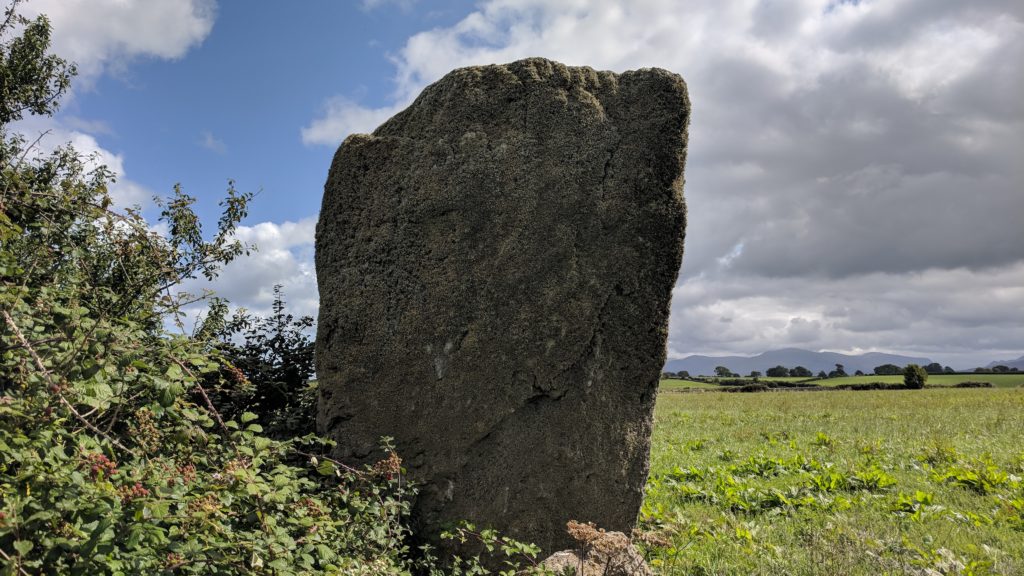 The Bryn Gwyn stones stand about 280 metres (920 ft) to the south-west of Castell Bryn Gwyn and can be reached across the fields or by returning to the road and entering the field further down the A4080. They are said to be the highest standing stones in Wales at around 4m high and were once part of a stone circle of 8 stones measuring around 16m across. The other stones are long lost but their foot print has been discovered by excavations. The pit of a further stone, inside the circle, shows it was a ‘blade-style’ stone, with an alignment with the summer solstice sunrise and winter solstice sunset. 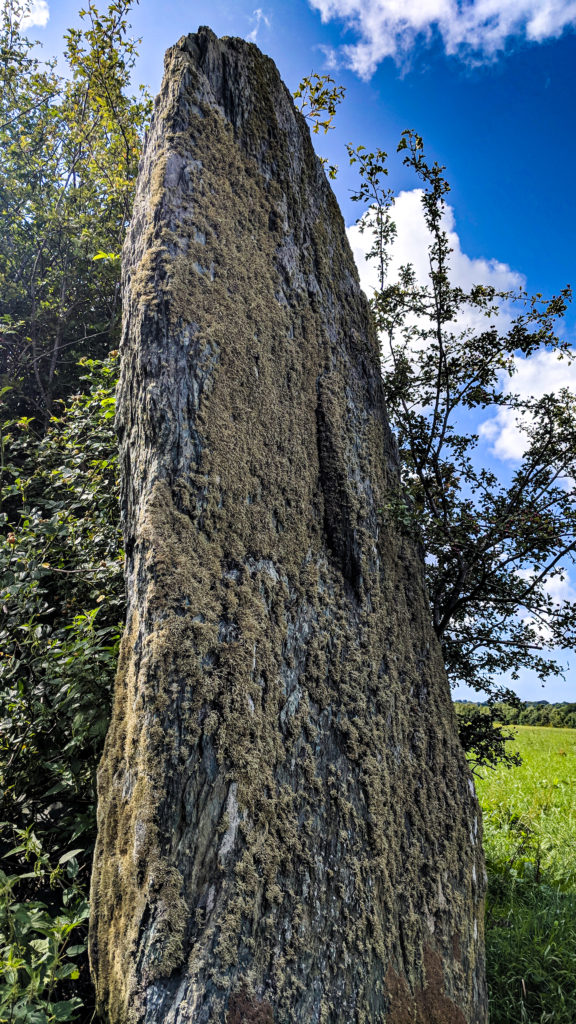 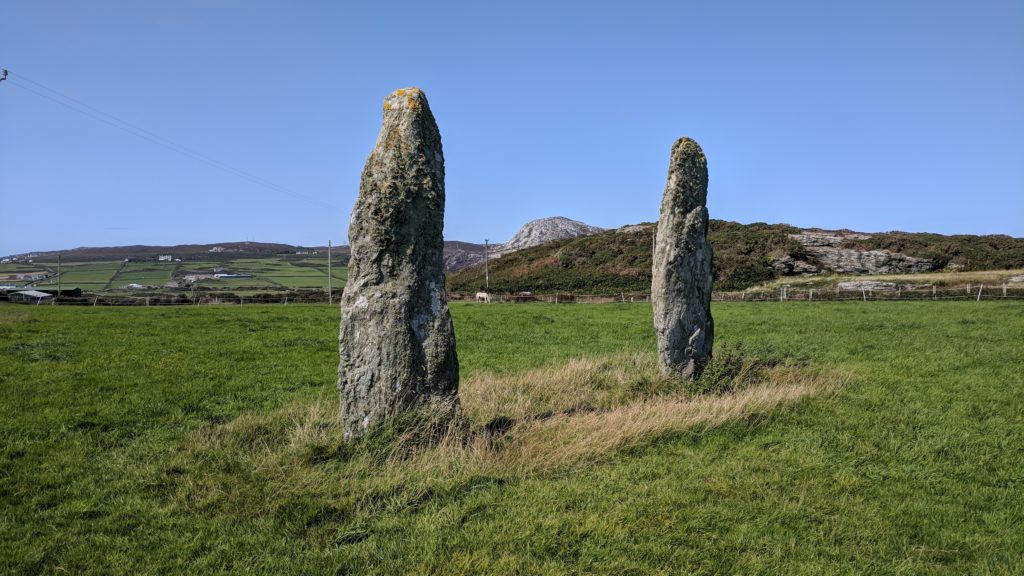 The stones are located behind the farmhouse of Plas Meilw, between Holyhead and Holyhead mountain. Not much is known about them but they are thought to be around 4,000 years old. They are aligned along their long axes in a northeasterly/southwesterly direction, with a fine view of the coast and towards Holyhead Mountain. There are theories that they may have formed part of a stone circle, however there is no evidence to support this. They are also quite close to the Iron Age Hut Circle which may or may not be of significance! 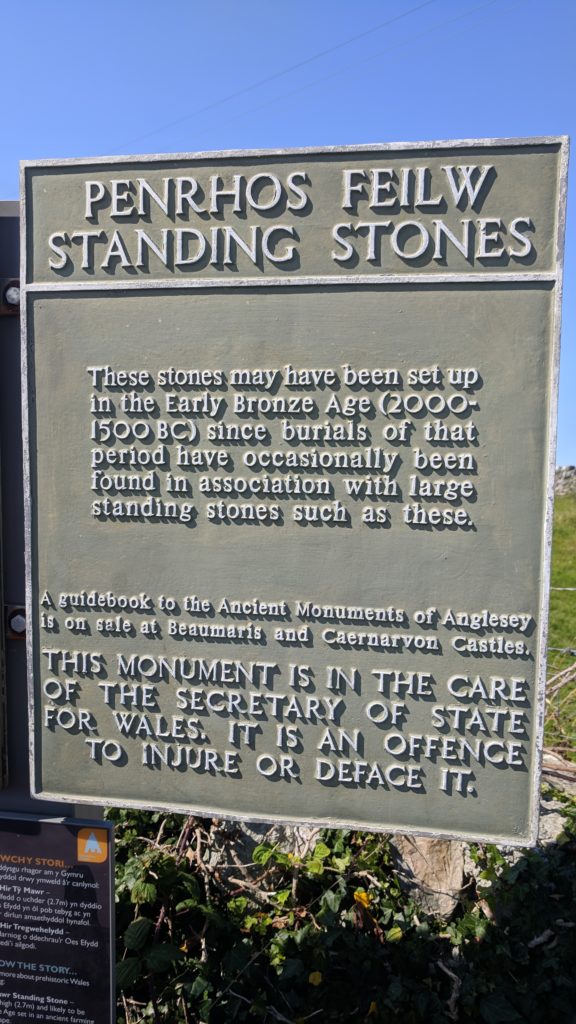 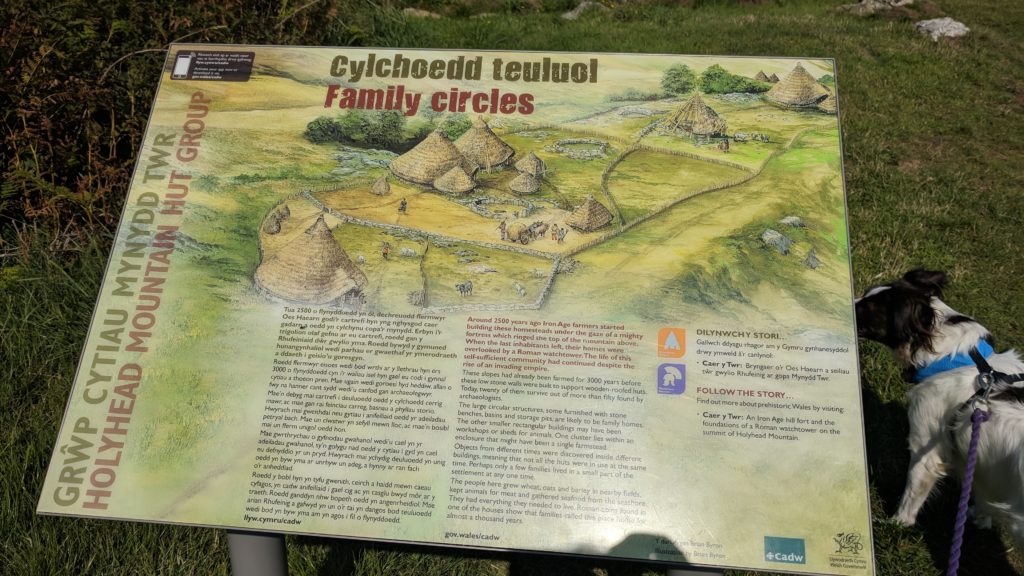 One of the best preserves hut groups to be found in Wales. The precise age of the hut group is not clear. Much of the site is thought to date from the Iron Age but the settlement may have been in existence over an extended period of time from the Neolithic to the Dark Ages, with different buildings being in use at different times.

Over fifty buildings were recorded when excavations were undertaken in 1860. The site was examined again between 1978 and 1982. About twenty huts have been reconstructed; each would originally have had a conical roof, supported by poles set on top of a low wall, covered with turf or thatch. Some of the huts are homesteads; these are mostly circular and hearths, alcoves and a stone trough have been identified. Others are oval and have a dividing wall, still others are entered by long passages, and some are small, and may have been used as storerooms or workshops. One building at the northeastern end of the terrace has a walled enclosure or paddock adjoining. 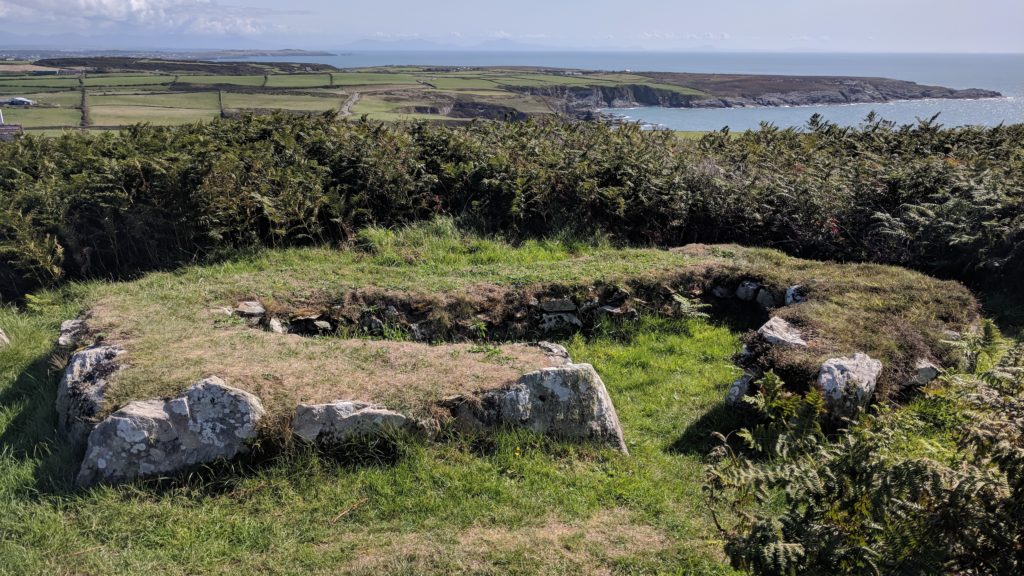