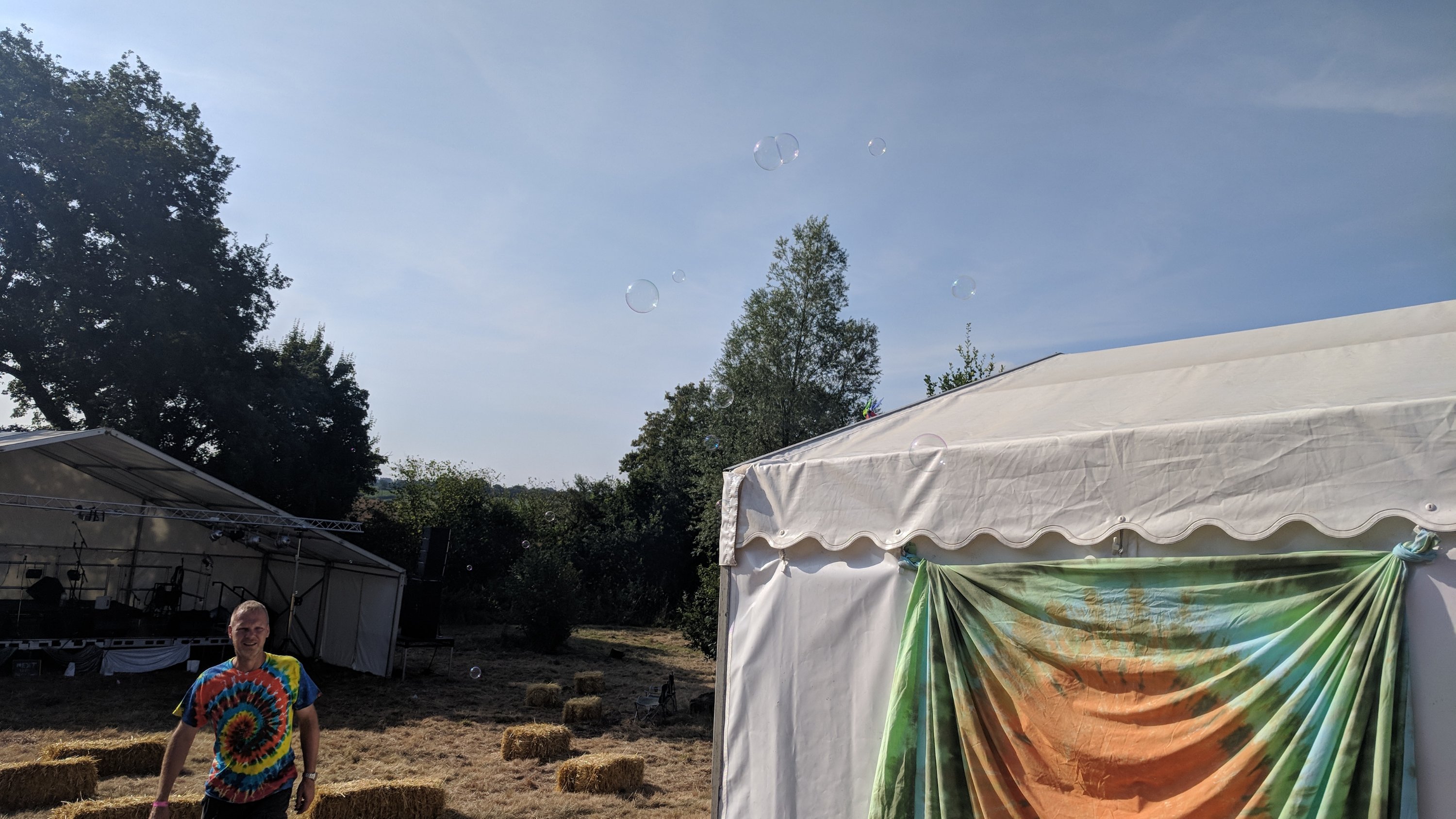 Woke up for the second day of SoL at around half seven after hearing a clatter outside my tent. I decided to go and see what it was in case someone was trying to get into the control tent but it turned out just to be Tim who was cleaning up rubbish from in front of the stage! I got up and made a cup of tea and then went for breakfast – I had tokens now so all was good! Actually I didn’t really go for breakfast, I wandered up to the kitchen and was asked if I wanted it – think I got the first one!

The first act this morning was Ron Trueman-Border who although I’d never heard of him I enjoyed immensely! I did listen to most of his set from the tent with all the lights and flowers where I was getting my arm painted! It’s Brighton Pride today and I know Becky will be going so I got my arm painted with a rainbow design to show support!

Bruce Barthol was next and he did a great set starting with Fixin to die rag and ending with This Land is my land! John Roberts, one of the organisers, sang and played spoons during his set and even did a couple of songs by himself!

It was a bit cooler today as there were a few clouds in the sky but the temperatures were still pushing 30˚ and when I left my phone on charge in the back of my car it shut itself down due to the heat. That means that in a few months my phone has been affected by both extreme heat and extreme cold and shut itself down at both ends of the spectrum! I’d missed the first act on the second stage but managed to make it up there to catch the Big Uke jam!

Dubbal were the next band on the main stage and as one of my former organisers said to me as he was enjoying SoL as a punter for the first time – I was starting to understand why people love to come along to our little festival! And as I said yesterday it’s not all to do with what we do but so many people bring themselves and add to the bits that we do! 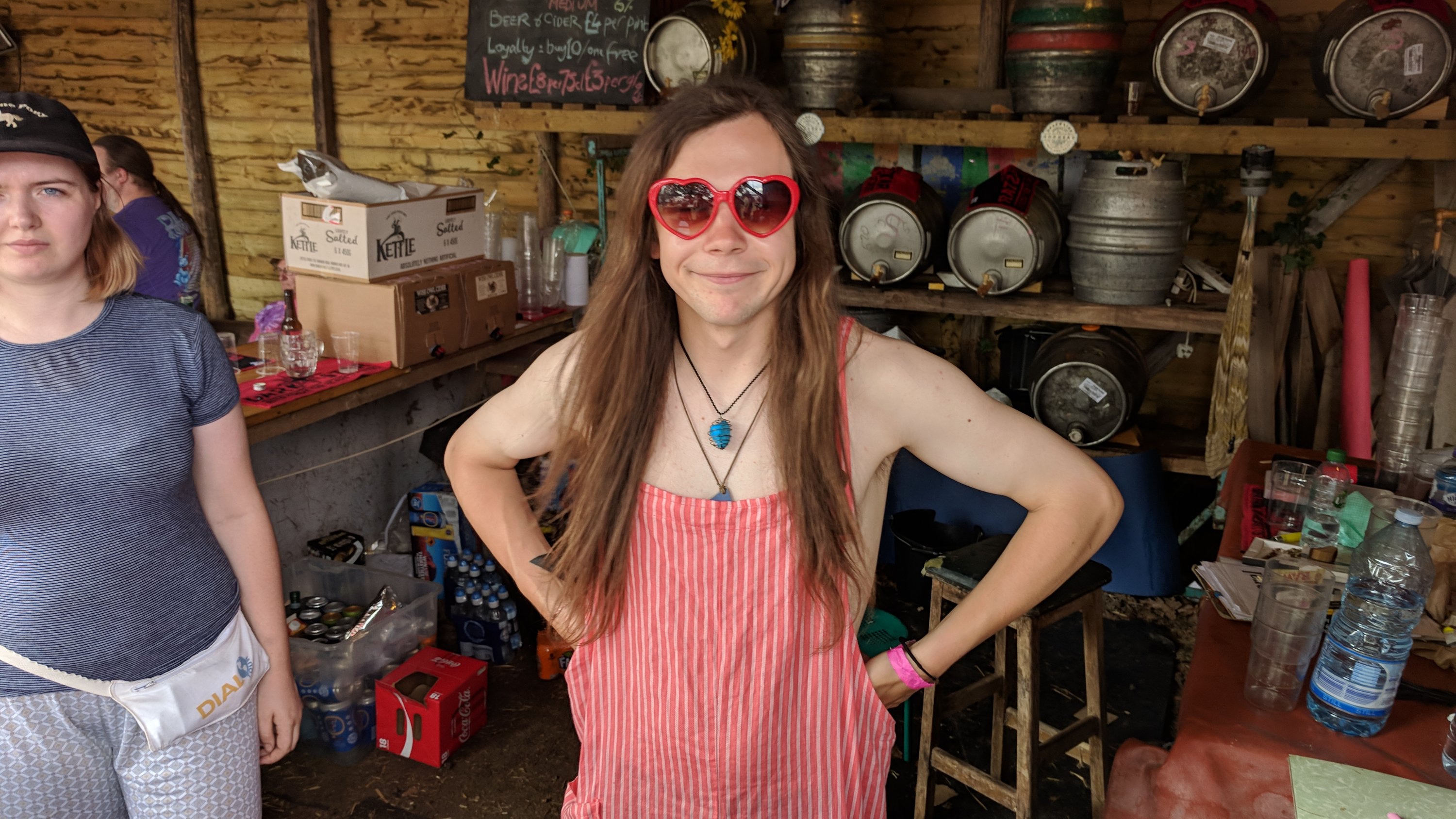 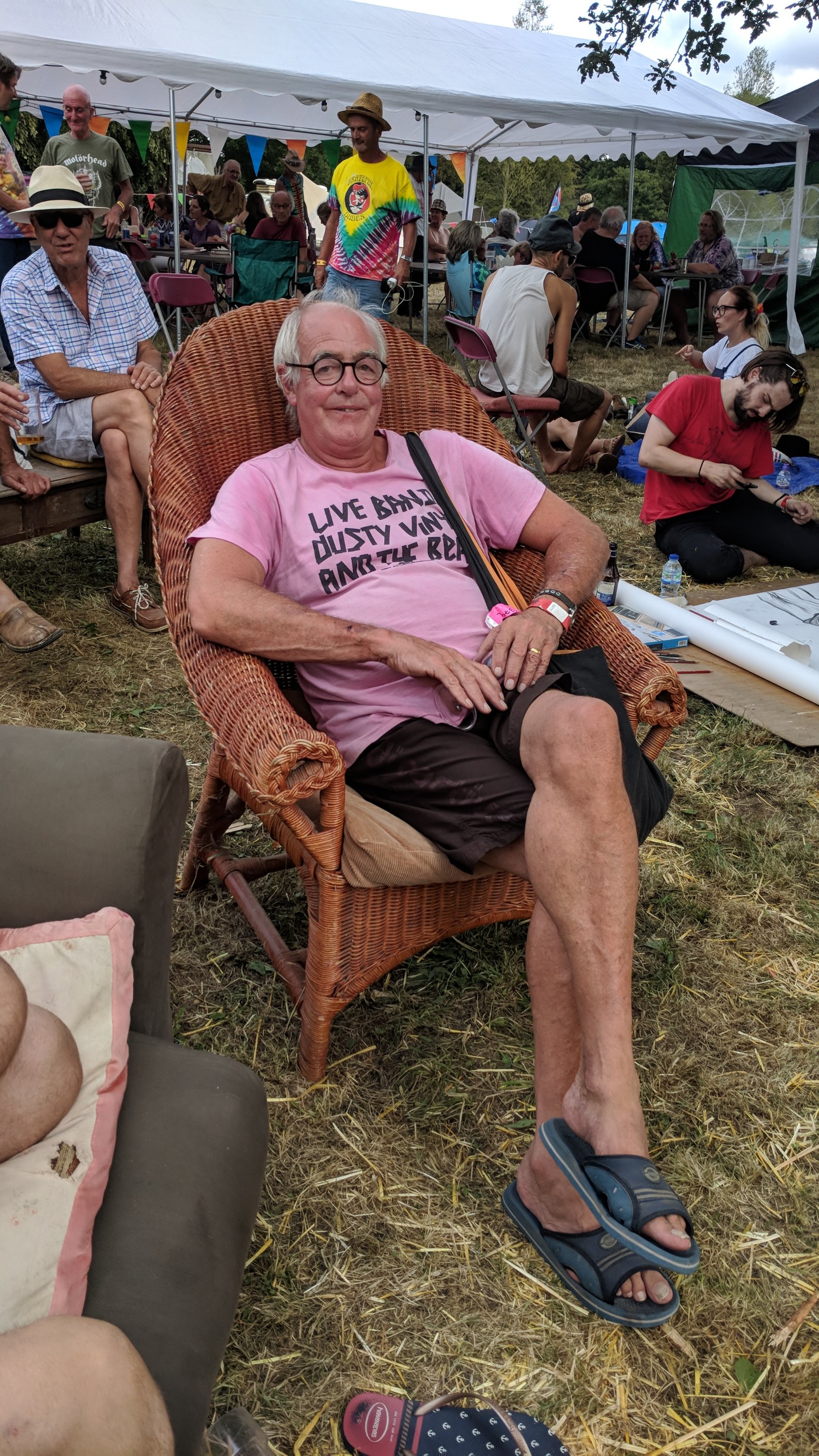 Rob Beckinsale followed on stage 2 then Keith Christmas on the main stage, another revelation of someone I should have heard of (and a jolly nice chap!) and then someone called Nuimigi on the second stage who didn’t quite match the description give at the end of Keith Christmas’ set! 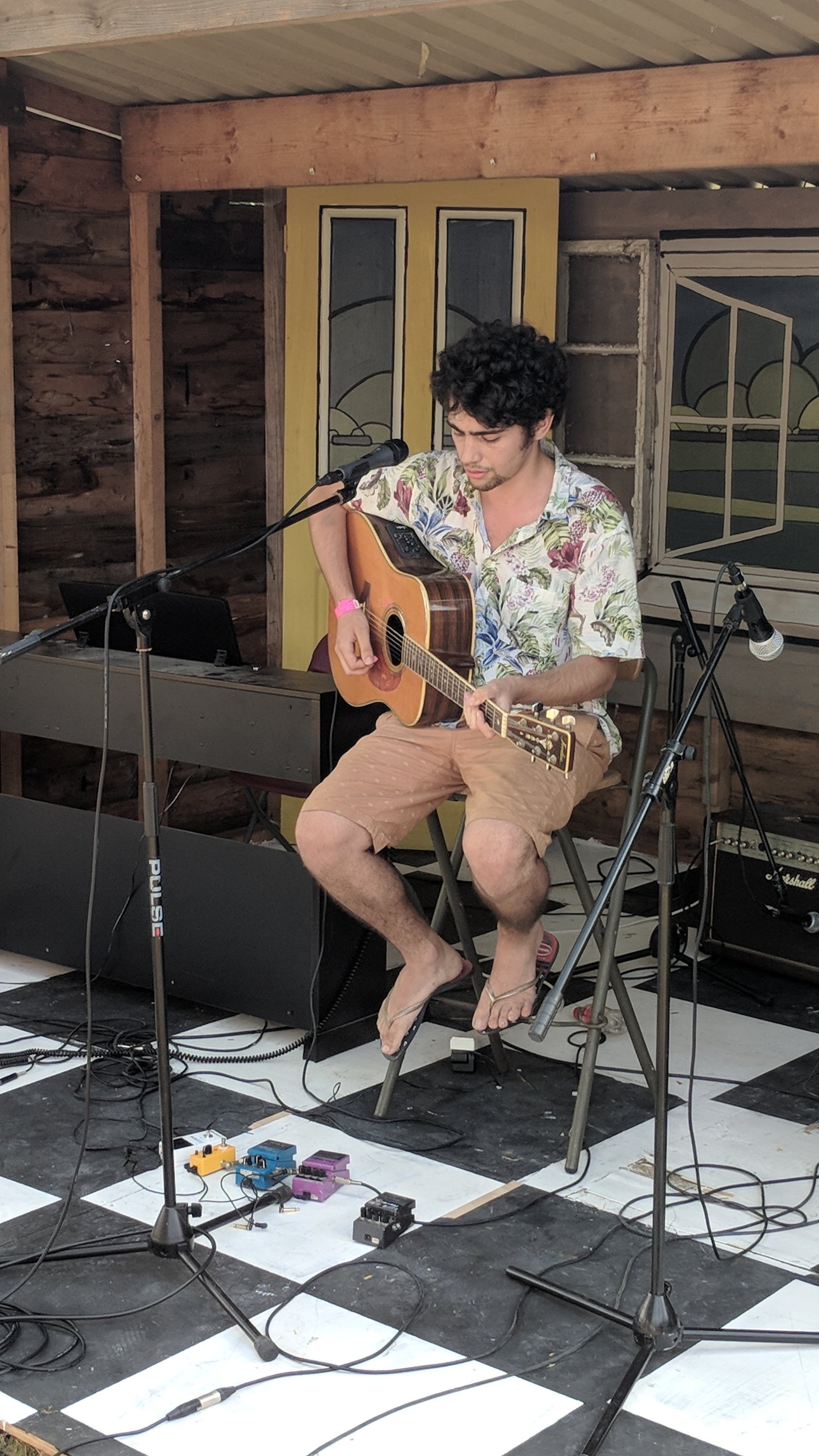 I hadn’t seen the next band for nearly 15 years – I saw the Muffin Men at the Borderline in about 2003, I’ve got a recording of the gig somewhere. They play the music of Frank Zappa and they’re really good at it!

Just as they started one of the band announced that one of them had eaten some space cake an hour before and we would probably be able to guess which one it was as the set went on! The sax player was the most likely suspect in my opinion and I particularly like the way he played an inflatable guitar or read a book during the guitar solos! At one point he kicked some inflatable balls into the audience and I just saw Pete the lighting man go to kick one but as he did he slipped over and fell on his arse. It turned out that he really hurt his leg and hobbled around for the rest of the weekend! 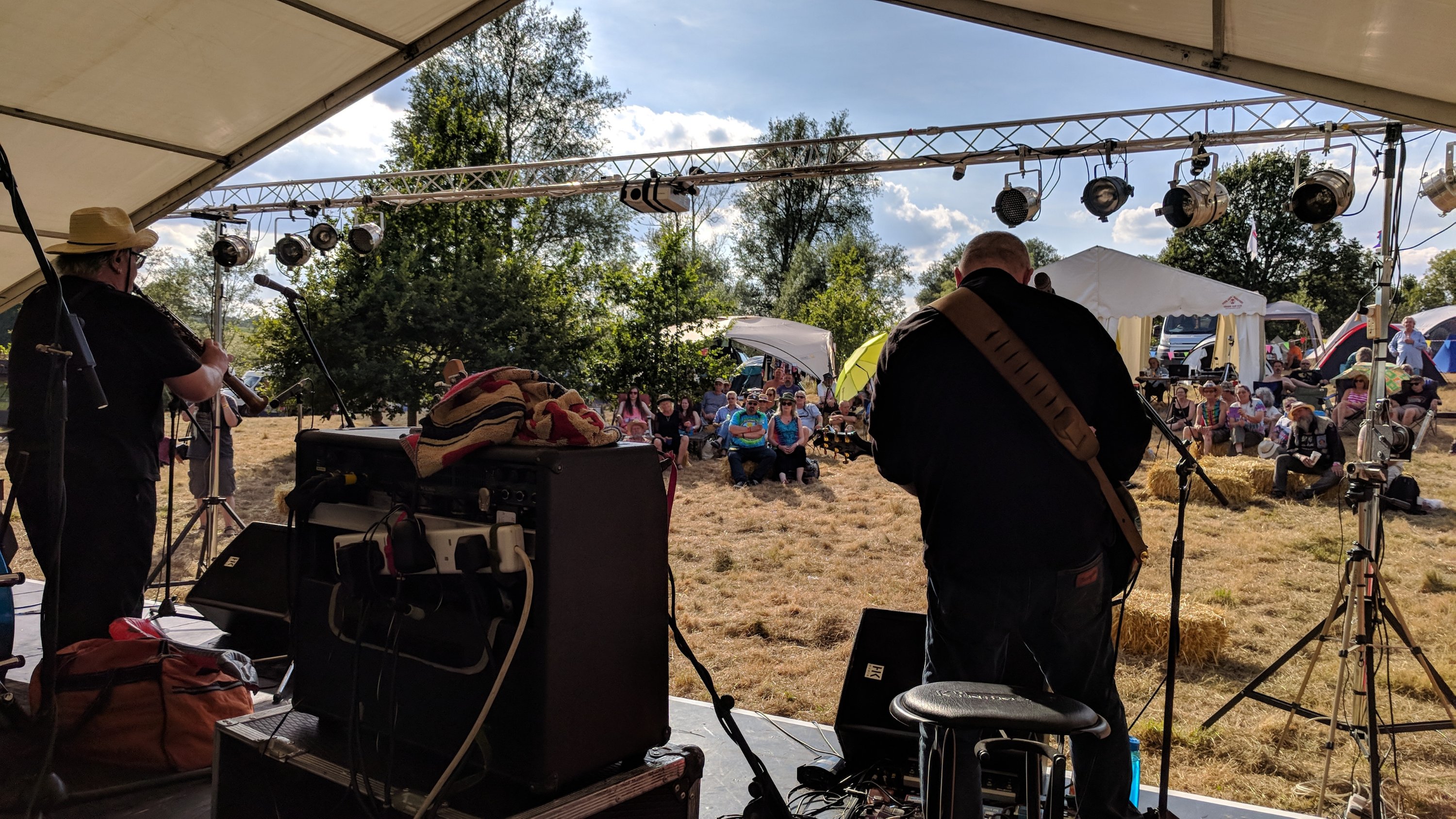 Yesterday I asked the question “how often do you find a former member of Country Joe and the Fish sitting in your chair!” Well today I returned to find two former members of Country Joe and the Fish sitting in my chairs and one of them was indeed the Fish! Barry Melton has probably played at SoL more than most, I think this is his sixth time and of course he headlined the very first SoL back in 2007. Unfortunately he had a fall at the airport in Paris a few days ago and when I went to say hi to him he was very protective of his right arm. I did wonder if her would be able to play later!

The running order had said that there was a secret special guest on the second stage next! As I walked up to the bar during the Muffin Men I spotted Bex Marshall in the crowd – she’d appeared here a few years ago with the Former Members and I’d forgotten that John had told me she was coming to play on the second stage!

We’d been running on time till this point but the next act took so long to get set up that we ended up running about half an hour late. It was obvious that Barry was in a lot of pain and played sitting down for the whole set. He was literally having to lift his right arm onto the guitar to play – poor soul! The Aguilar Blumenfeld band did do a really good set with Barry throwing a few of his tunes in every now and again! At one point David Aguilar snapped a string on one of his guitars and turned to Pete the lighting man and asked if he could change it. When he said no he asked if he could find someone to do it! I’ll never forget the sight of Pete hobbling around with his poorly leg and stick miming guitar while asking for someone who could change a string. He eventually found someone who could go backstage and do it! 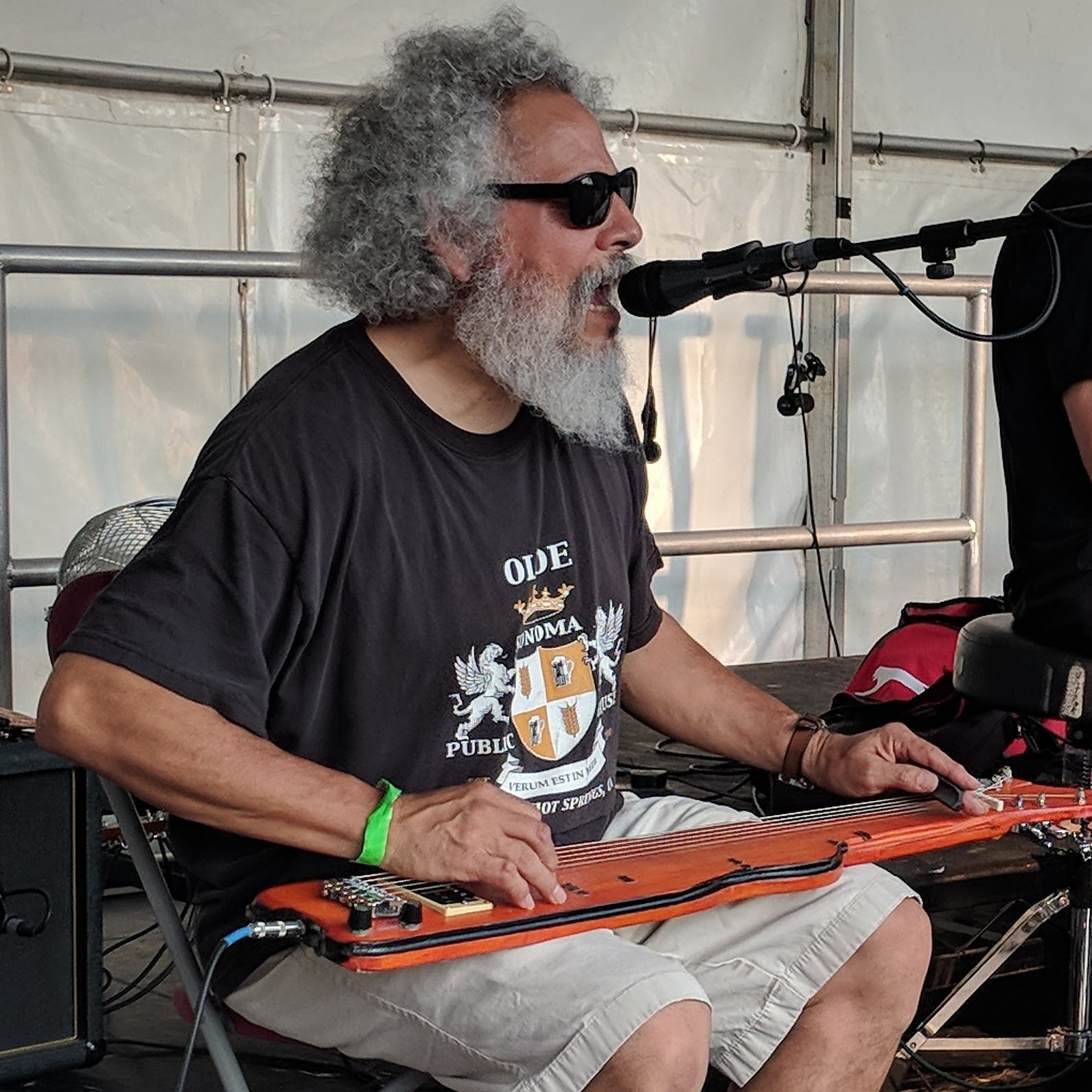 Once again there was an hour between the last two bands so I was able to catch a bit of the headliners on the second stage. One of the biggest regrets I had over the years at SoL was having to stop Lapis Lazuli so we didn’t over run when they played on the main stage. So I was glad to be able to catch some of their set again tonight. I would have loved to have been able to watch the whole thing but I kept having to go back to see what was happening on the main stage! 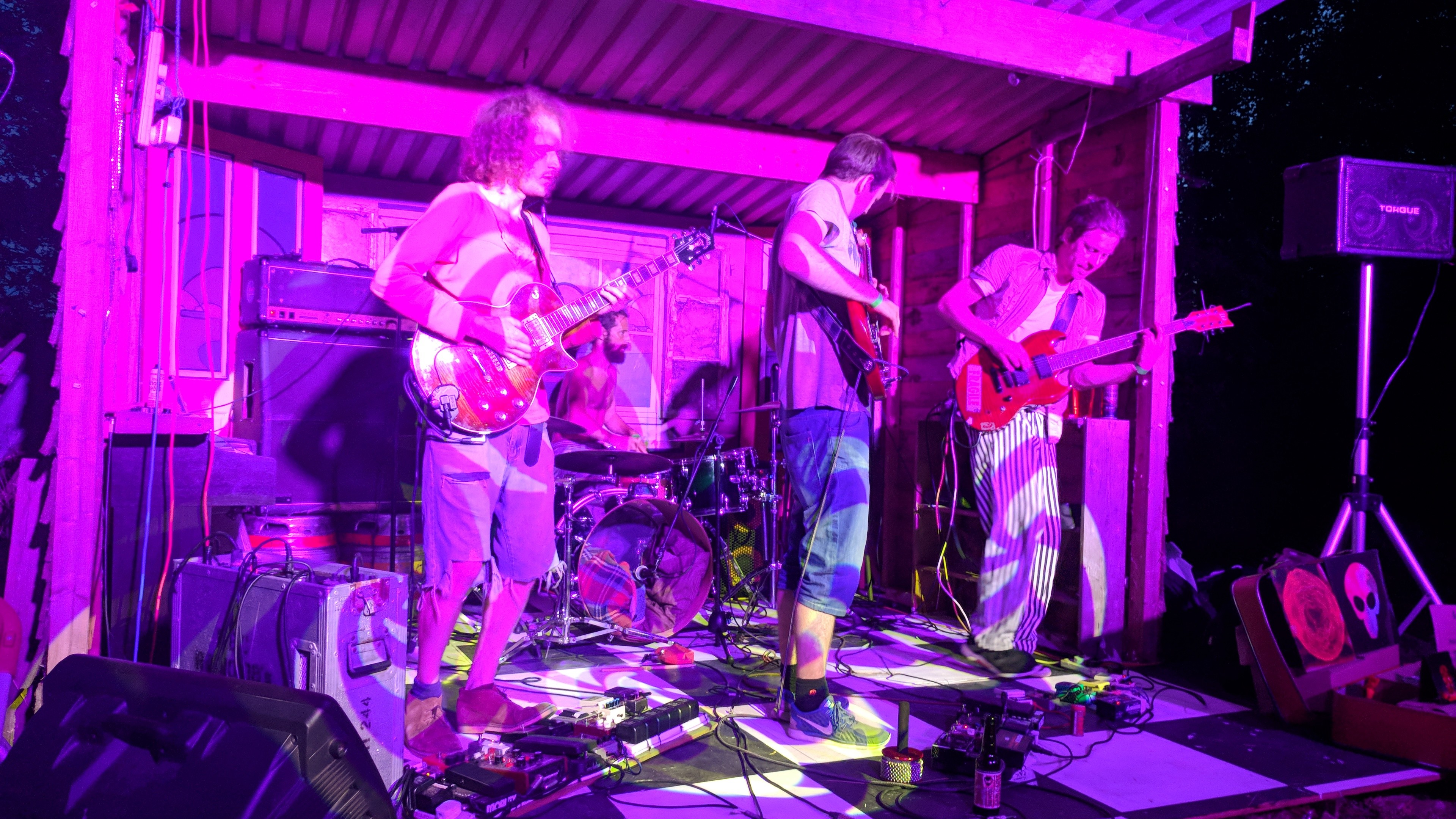 Now the rainman gave me two cures then he said, “Jump right in”
The one was Texas medicine the other was just railroad gin
An’ like a fool I mixed them an’ it strangled up my mind
An’ now people just get uglier an’ I have no sense of time

In addition to running half an hour late generally there were now technical issues which delayed us further. This meant that we had to keep an eye on how long the headliners, the Grateful Dudes played for! In the past Dead cover bands have been notorious for playing way past the finish point and to be honest keeping track of time wasn’t going to be my forte from here on in!

To be fair the band were very good and did stop at 11:45. Tim had suggested that we tell them they had five minutes left because we knew they’d take ten! They were just about to leave the stage when I told Bill they could do one more but added “as long as it’s not 25 minutes long!” They finished off the evening with Shakedown Street and the final notes died away at 11:59pm! 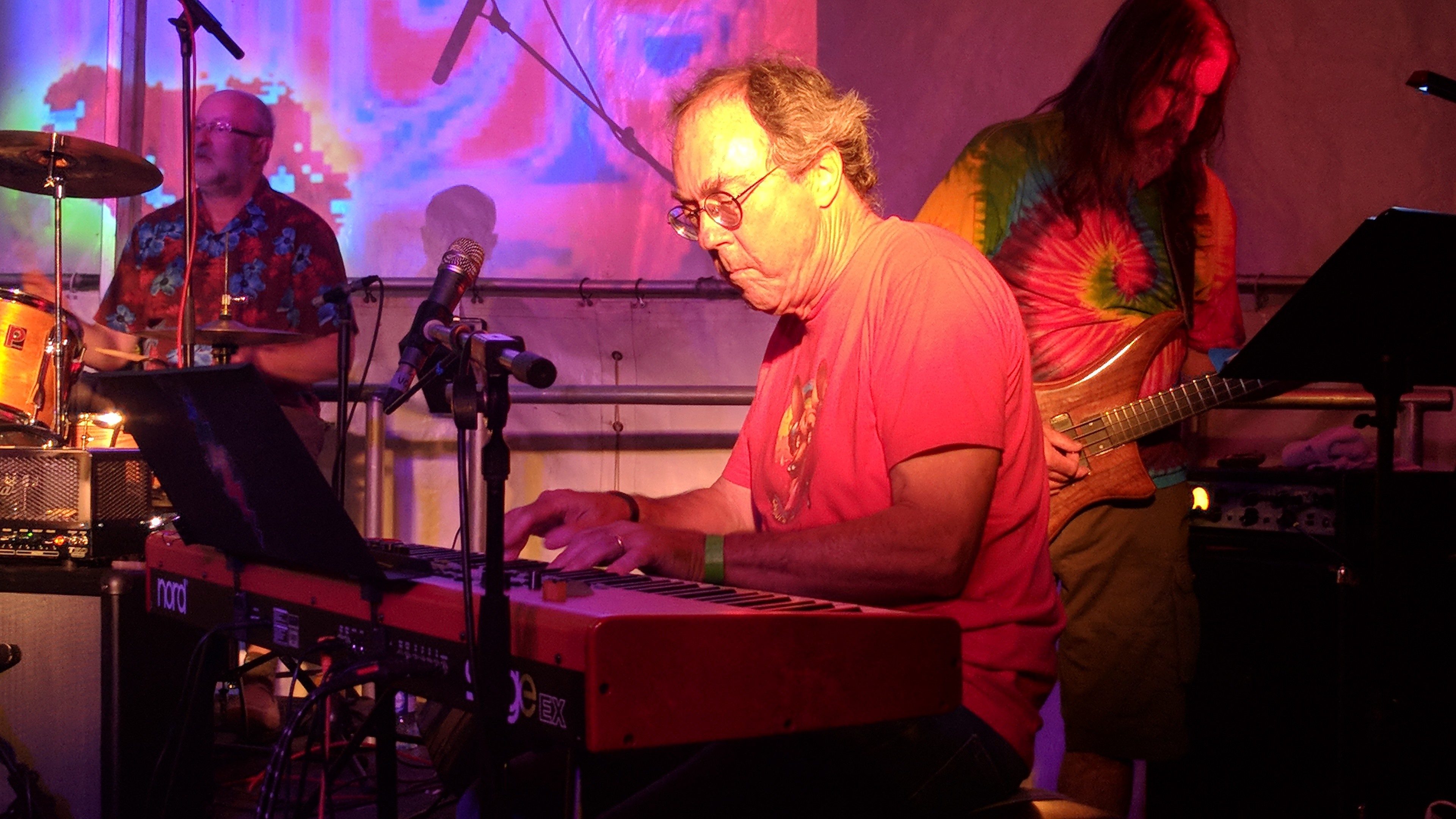 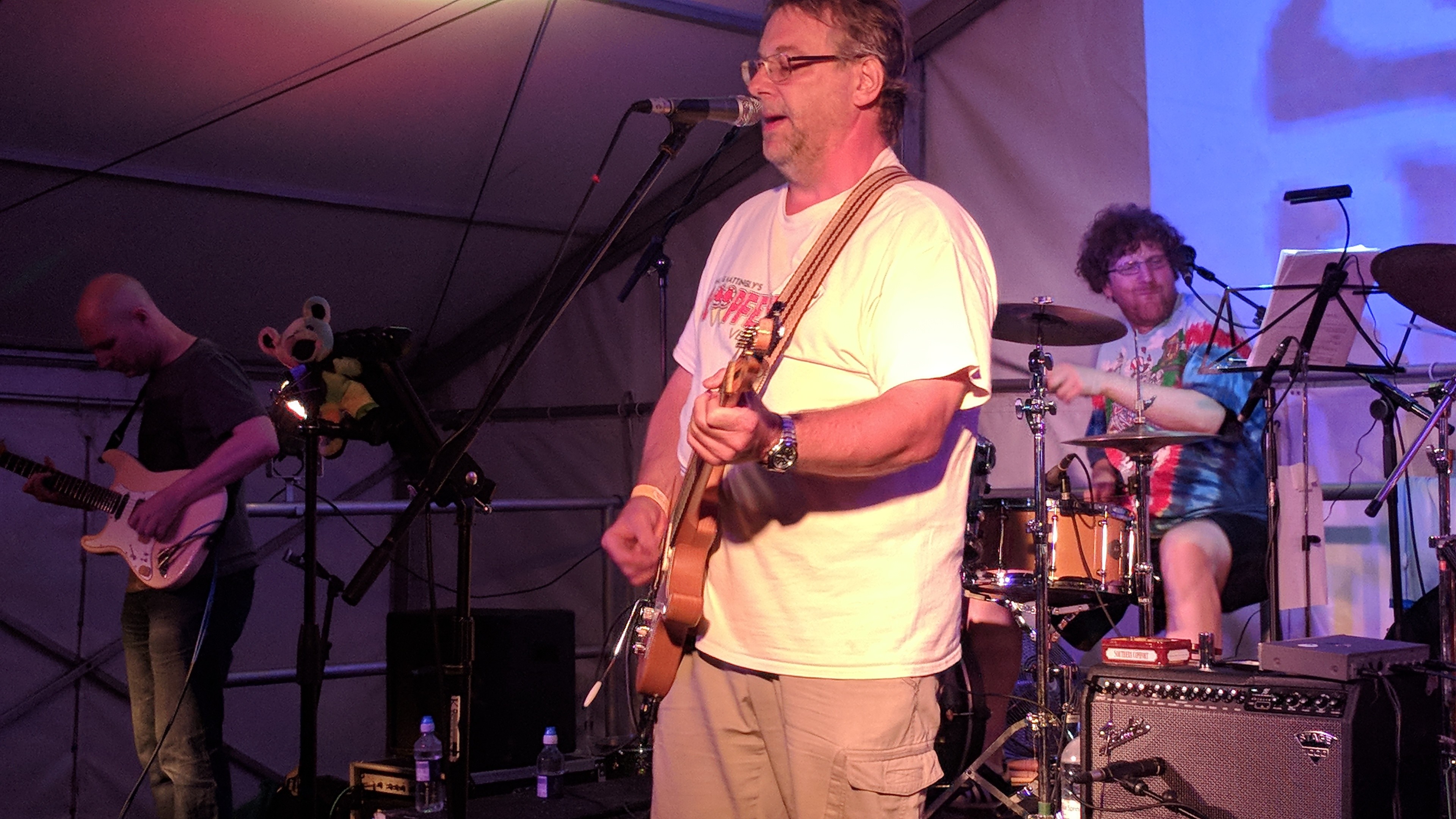 After they finished I was, how can I put this? a bit messy! I struggled to type the words Grateful Dudes as I saved off the recording. The band seemed to be leaving some of their kit on the stage and then they seemed to be packing it away and then they all disappeared leaving some of the kit on and off the stage. I wandered around the site for a bit looking at how beautiful everything looked and enjoying the stars – it was a clear night again and you could see the Milky Way by eye! 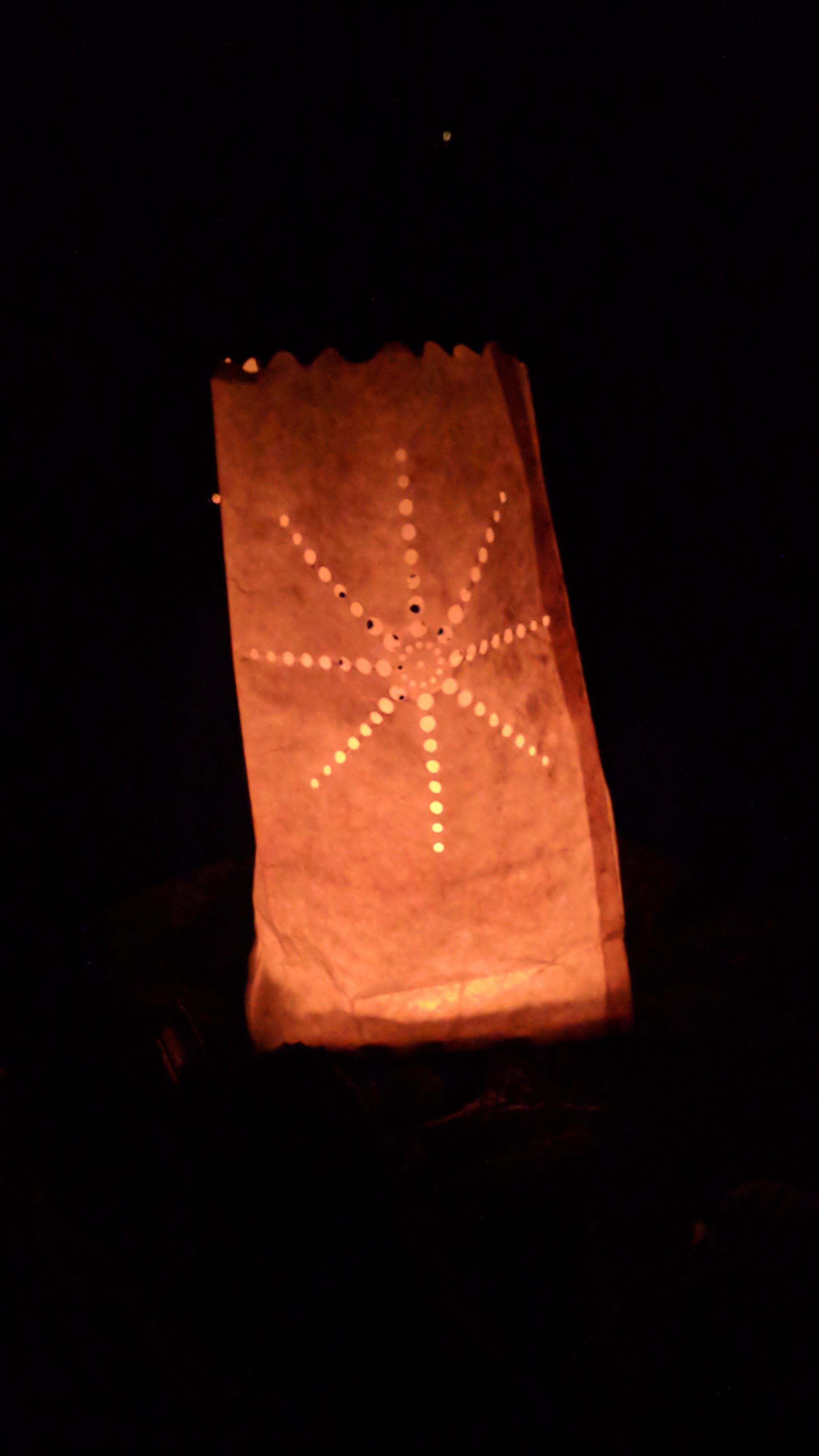 I ended up by the campfire till about 2am at which point I decided to call it a day! I think I enjoyed this SoL far more that I’d enjoyed the last two or three, maybe it was the year off that did it – who knows!

I woke up in the middle of the night and couldn’t work out what was going on. Every time I tried to move my hand it seemed to be behaving very strangely indeed. It took quite some time to work out that I had got myself into a very strange position and had been laying on my arm which had gone numb! I rearranged myself and the sleeping bag and felt better and warmer so I went back to sleep! I woke up at about 8am. 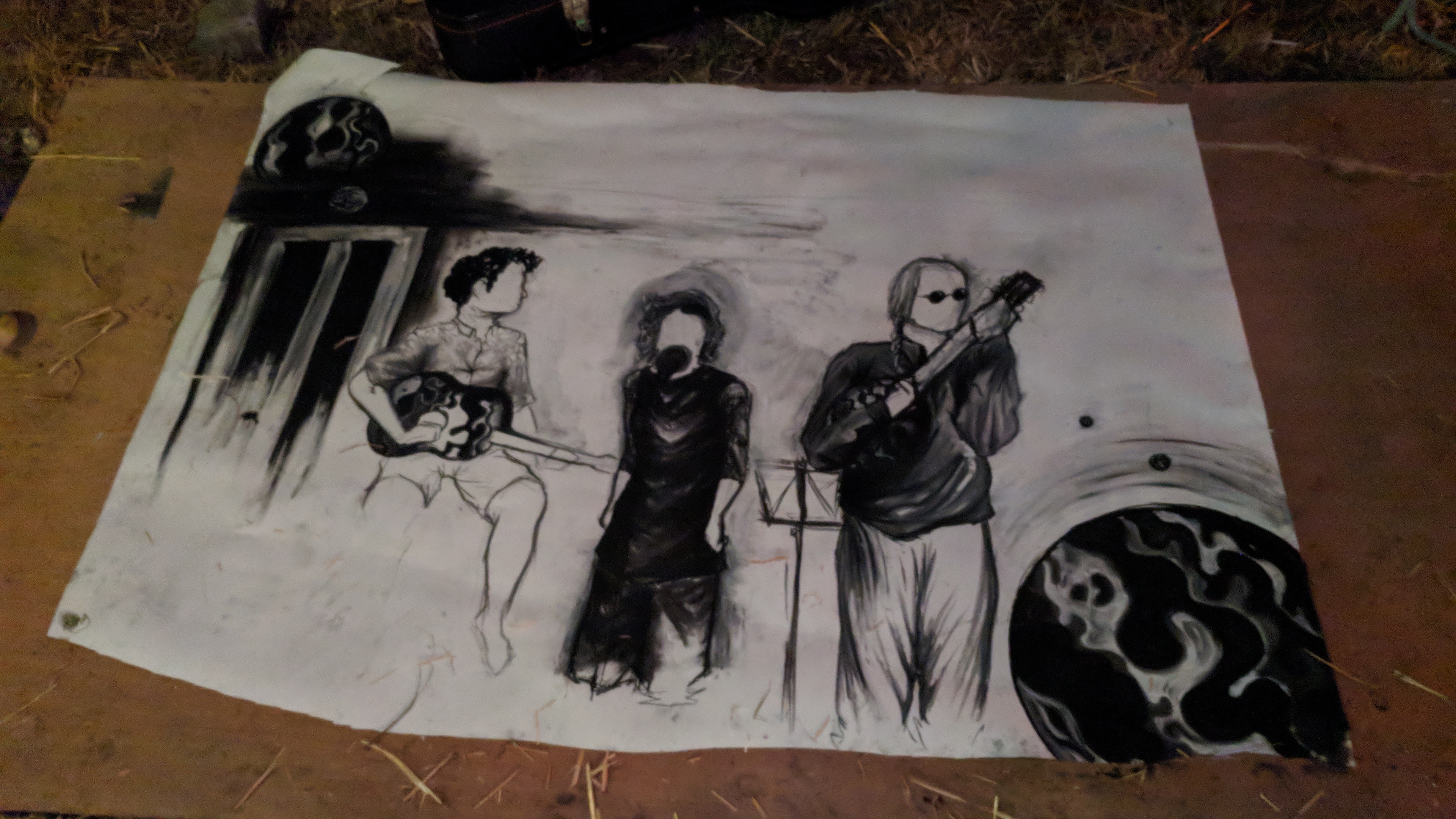 I got up, made tea and headed off to take out the video and audio cables before cars started driving over them! That done I went to have breakfast and then headed back to the stage to start sorting out and packing up. in the bar area were a collection of the artworks that had been done by the friends of Titus!

I packed all my stuff away and derigged Pete’s light and projector because his leg was still poorly after his tumble yesterday. Then a group of us took down and packed the PA stacks away. Some of the stuff was going today – the stage company and the marquee company arrived and strated to dismantle their stuff while I was there. I went off and found Tim and got cheques for Jay, Pete, Upstaged and myself sorted out! Once everything was packed away I headed off for the long drive back home!

I’m an old hippy – I know that, always have done but it has been so obvious this weekend! Sitting on the boot of my car wearing a tie-dye t-shirt, barefoot with rainbow spirals painted on my arm and randomly blowing bubbles into the air…I mean what else could I be? It’s just so beautiful to spend the weekend with like minded people who just want to enjoy the music and the company in wonderful surroundings. Everyone brings something to the party and takes away even more. There’s no trouble and everyone is happy!

It’s even more beautiful to know that you helped put it all together!

Well, I came upon a child of God
He was walking along the road
And I asked him, Tell me, where are you going
And this he told me
Said, I’m going down to Iden Green
Gonna join in a rock and roll band
Got to get back to the land and set my soul free
We are stardust, we are golden
We are billion year old carbon
And we got to get ourselves back to the garden