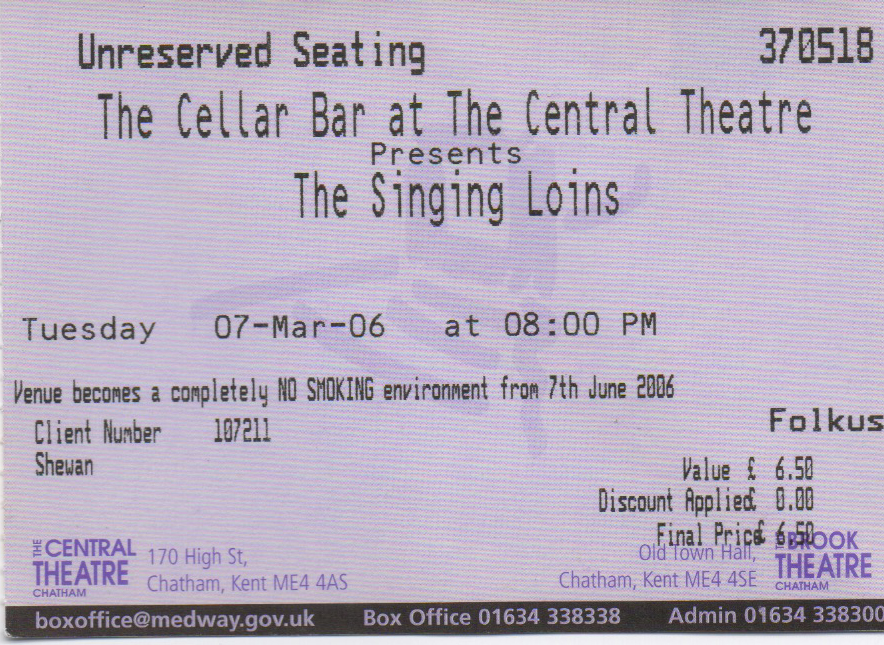 This was originally posted on an old blog back in 2006 under the title of “Four and twenty Madmen dancing on your chest!”

After a couple of very stressful days during which I had some very early starts and at one point foolishly found myself squaring up to an armed Policeman I got to relax and go to a gig last night. The same people who organised the Keith James gig with the awful cold atmosphere I blogged about a while back organised this one. Luckily though it was in a far more suitable venue and at least my ex-wife didnt turn up this time!!

The band in question was the Singing Loins who have been playing around the local area for the best part of fifteen years. I first saw them in about 1998 at the Medway Little Theatre supporting John Otway. Essentially a duo, both called Chris but more usually known and Brod and Arfur, they play wildly energetic quirky songs, which fit neatly into a folk pigeonhole a bit like a square peg fits in a round hole!!

After the first time I saw them on a regular basis in the pubs around the area until at the end of a show in a packed pub at the Rochester Sweeps festival a punch was thrown and the group split up. The two of them followed their own paths until about a year ago when they got together for a one off reunion gig and have been together ever since. A third member, Rob, has now been added playing guitar, mandolin, banjo, toy accordion and melodica.

Since they reformed I have managed to miss every gig, except for two songs on the open air stage at last years Sweeps festival  however that was put right last night at the Medway Folk Cellar, a bar under the local theatre. The band played two sets containing lots of their Lo-fi trash-folk classics and songs from their new CD Songs to hear before you die

The songs tell stories sometimes sad, sometimes funny and occasionally downright ridiculous. They often draw on local influences for example Valerie is a song about a girl with Downs syndrome we used to bully but are no less accessible for this  I didn’t grow up in the area but still find them facinating. For example Big Wheel, a tale of young love at the Strood fair is one that almost anyone can identify with

Linda I feel so drunk, I love you I do
Its imperative that we have sex, NOW!
And if we cant go to your place were lumbered
So lets go on the big wheel again
And then after that well well do it twice more in the mad house
With the mirrors

Before the gig they had announced that they were going to dig some old songs out that they either hadnt played before or hadnt played for years and sure enough they did  among them were some of my favourites from the CD  the complete and utter Singing Loins. Rochester, My Dear, Fool Jack , The Ghost Of Old Rose, Fish, I’m In Love With The Loveliest Whore and My Madonna. The last was one of three poems set to music by the band  the other two both being by Kipling.

The evening had started with an apology when Brod pointed out that he had had to retire his stick, which he used to keep rhythm  apparently he is suffering from arthritis and cant bang it anymore. A tambourine has replaced it but he managed to put his hand through that. There was also the sight of both of them having to put on their glasses to read the lyrics from a sheet of paper when they sang another Kipling poem acapella.

I was going to request a song called Right Good and Proper during the interval but they played it during the first set so I used the time to leg it down the road to the cashpoint as Id forgotten to bring enough money to buy a t-shirt. Although after hearing the songs from the new CD I wished I bought that as well. The songs played were Bakers Arms (August 58), Angel of the Medway and House in the Woods. There are some MP3s on their website.

The evening finished off, rather appropriately with Cheeriotatatoodaloobyebye before they did a well-deserved encore of their song Chatham Girls, written years before the word Chav was even thought of! A great evening and Im looking forward to seeing them again soon.

Footnote 1: The support act was the Hot Rats duo, which features Ian Cutler on fiddle. Ian was the fiddler in the cult film The Wicker Man.