This wasn’t really a gig but it did include music so I thought I’d include it here. While we waited for Jez to come and speak we were entertained by Bethany Elen Coyle and the North East Socialist Singers  who sang a number of left of centre tunes. 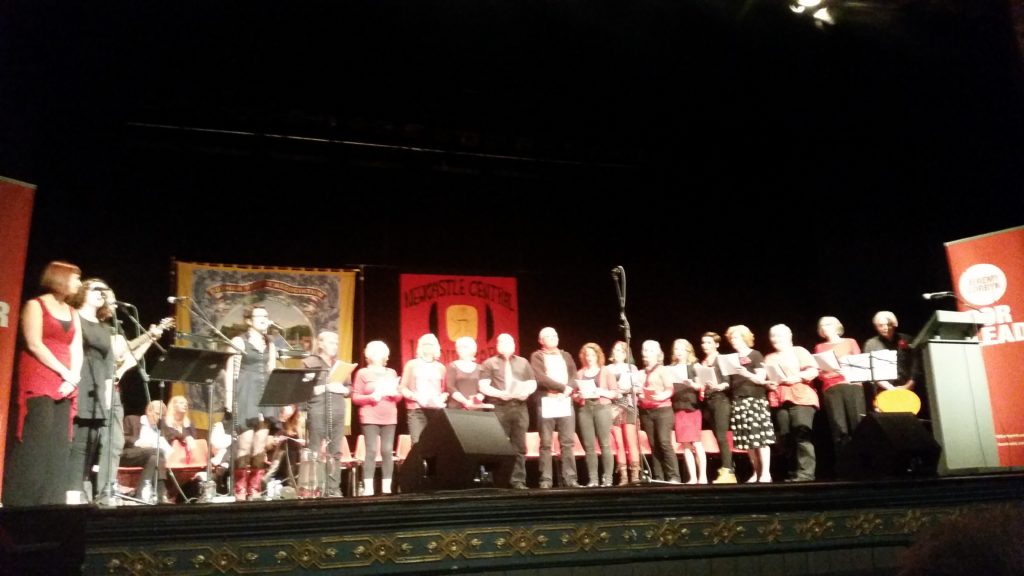 We also sang the red flag at the end! 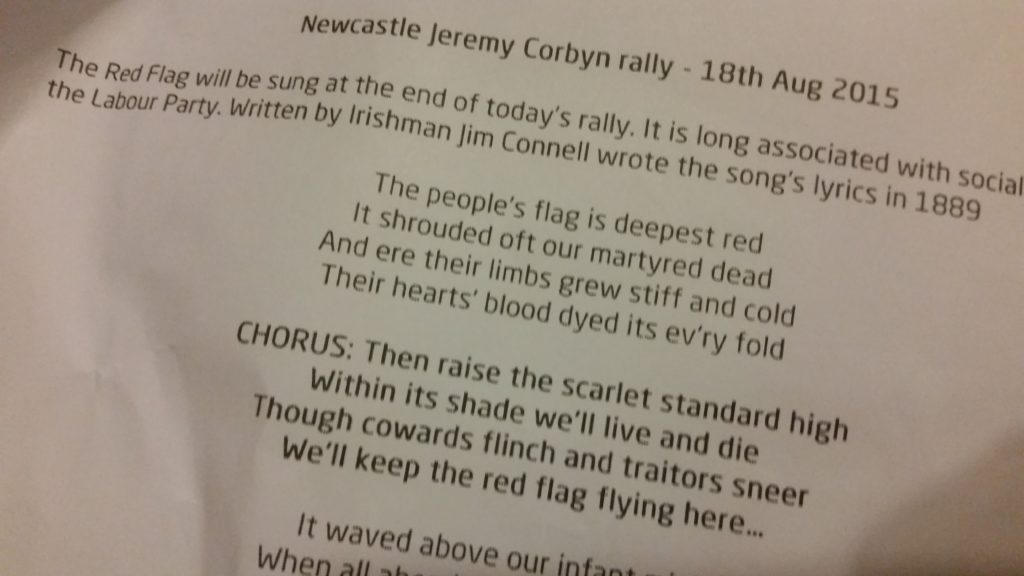 Here’s what I wrote about the evening at the time

I’ve been a lifelong Labour supporter but recently I felt the party has lost it’s way. The general consensus seemed to be the only way to get elected was to become the Tory party with a nice smiling face. Tory lite as people has started to refer to it. I felt so frustrated  in the run up to the election with the party leaders who were effectively apologizing for things they’d never done! Labour didn’t cause the recession but the Tories said they did and waved that bloody piece of paper and the Labour leaders were too scared to say it wasn’t so. It was no wonder we lost and condemned the country to five more years under the nasty party.

So after the last election I vowed to get involved but with what – I didn’t fancy joining the party that had let us down so badly so I thought about things like joining a union or helping out a food/clothes bank (yes there are two clothes banks in County Durham). And then Jeremy Corbyn threw his hat into the ring – here was a man who was saying the things that I was feeling like in the 6th richest country in the world we shouldn’t have people having to go to food banks and why are we spending billions replacing Trident when we are all being told there’s no money. So I discovered that you could get to vote in the leadership election if you signed up as a registered supporter for £3 – so I did with a view to joining the party if Jez won!

The a few weeks ago I saw that Jeremy was coming to Newcastle to speak as part of his campaign to become leader. I made a note in my diary to go and joined the Facebook page. I’m glad I did because shortly afterwards they announced it was ticket only and the tickets went in less that 5 hours! In fact demand was so great they had to organise a second rally outside to take place before the main one.

So I headed off tonight to the Tyne theatre and it was pissing down! I had planned to go and watch some of the outside rally before heading in to take my seat but as it was so wet I took cover under the portico of the theatre and soon found myself at the front of a very large queue! I did wonder if anyone would turn up to the rally but in the end around 600 people did – probably a better turn out in the rain that the other 3 candidates could manage indoors. I was inside by this point and sitting waiting for it to start.

The evening started with music from Bethany Elen Coyle and the North East Socialist Singers which did a number of songs – one of which really caught me – It was a song called the Durham Lock out by the Pitman Poet Tommy Armstrong which she’d updated a verse in as things are going back to the way they were. Then there were a number of other speakers such as Dave Prentis from Unison, Dave Hopper from the Durham Miners and local Councillors and MPs. There were some stirring speeches but eventually they gave way and Jeremy Corbyn took the stage.

I’ve heard and seen many top Politicians speak – Cameron, Blair, Brown, Gove, hell even Thatcher and Bush but I don’t think I’ve ever heard anyone speak with such passion and honesty as Corbyn did this evening. There were no fudges, no jargon just clear speech outlining what he thought this country needed and this was at least the 75th time he’d spoken since the start of the campaign and there was no sign of going through the motions – he spoke with the passion of a man who knows what he wants.

I have no idea what will happen from this point on, it’s obvious that Corbyn will win but where that will go I don’t know. The establishment will close ranks and there will be dirty tricks and worse – someone even joked that Corbyn could well be assassinated such are the stakes involved. Who knows but I can’t help but feel that tonight I actually had a seat in the second row as history was being made!

I know one other thing which I thought about as I walked back to the car clutching my souvenir Jeremy Corbyn North East tour t-shirt and beermat! I want to live in a country where people are treated fairly, where working people don’t have to go without to pay the rent or bills, where they don’t have to rely on foodbanks to feed their kids – is that too much to ask? As JC himself had said “we should measure the success of our nation not by the number of millionaires we have but by how few of our children live in poverty”

Onwards to the future!