A few weeks back I booked this afternoon off to go to a gig in Sheffield. Unfortunately after I had done it I discovered that it is also Ben’s Parent’s Evening today but thankfully Sarah passed her driving test so that sorted that one out. What I hadn’t foreseen was being so busy that I didn’t feel that I could justify the afternoon off. So instead of wasting two hours driving to and from the office I decided to work from home and use those two hours to get stuff done. So I started work at 7:45 and worked right through till 2:30 when I had to take the dog out and get ready to go. I managed to get lots done so I didn’t feel guilty about heading off to Sheffield! 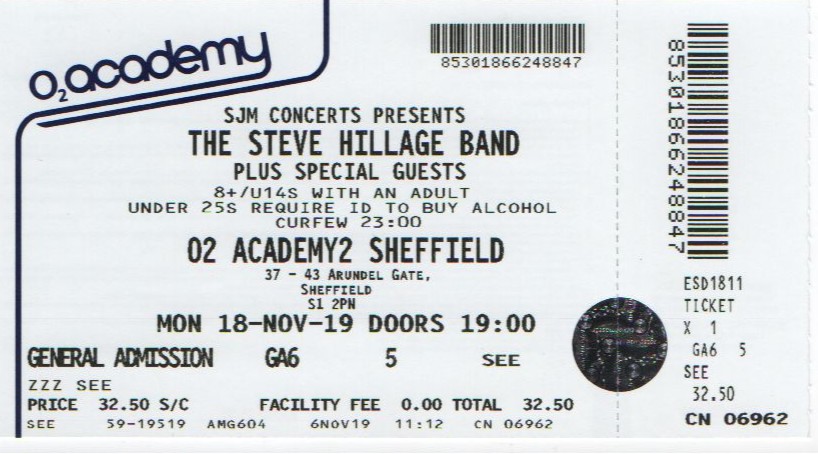 I’d seen both Steve Hillage and Gong already this year – I saw Hillage in Manchester in June with my brother and obviously Gong were there too as the Steve Hillage Band. I also saw Gong at the Cluny back in May and I thought they were brilliant. So ever since the November tour dates were announced I have been wanting to go and see them. I was torn between Glasgow and Sheffield which were the two nearest gigs but when I actually went to buy a ticket the Glasgow one was sold out so Sheffield it was – it was probably a better bet anyway as I know Sheffield better than Glasgow.

I’d done some research and found somewhere to park cheaply just like I had done for the Manchester gig. I put it in the SatNav and set off. I’d left enough time just in case there was traffic or I couldn’t park where I intended or had difficulties finding the venue. In the end the journey was ok apart from a bit of slow traffic where the M1 and M62 meet and just coming into Sheffield. I followed the SatNat to the car park but found that the road was now a bus lane and I couldn’t get to it! I ended up turning into the Holiday Inn car park and doing a circuit of that before turning back out onto the road. As I did i spotted some parking spaces so I pulled up and checked how much it was – it was £2.20 until 8:30 and free after that – perfect! I the went and found the venue and I was outside at quarter to six and the doors didn’t open till 7! I thought there might be a queue but there was no one in sight! I decided to wander off and maybe get a drink and come back when there were people queueing!

I knew there was a Wetherspoons so I wandered off to find that because I thought I might be able to afford a pint out of the money I hadn’t used to park my car! I was correct and I had a pint of Ruby Stout for the princely sum of £1.79. After I had drank it I wandered back to the venue but there was still no one there! There were lots of doors so I didn’t want to stand outside the wrong one but eventually somebody told a couple of us which door to use and we formed a queue and I was fifth in it! It was quite cold as I had left my coat in the car and of course by the time we did get inside I figured I should go to the loo. So I nipped in there and still managed to get the last spot on the rail in front of the stage. I couldn’t believe my luck because I knew I would be right in front of Mr Hillage when he came on!

The venue was a lot smaller than I was expecting – not much bigger than the Cluny in Newcastle where I had seen Gong back in May. I was expecting something the size of the Ritz where I’d seen Hillage in June – someone suggested that it had originally been scheduled for the main room but moved into this one due to poor ticket sales – oh well never mind I preferred the intimacy of this venue. 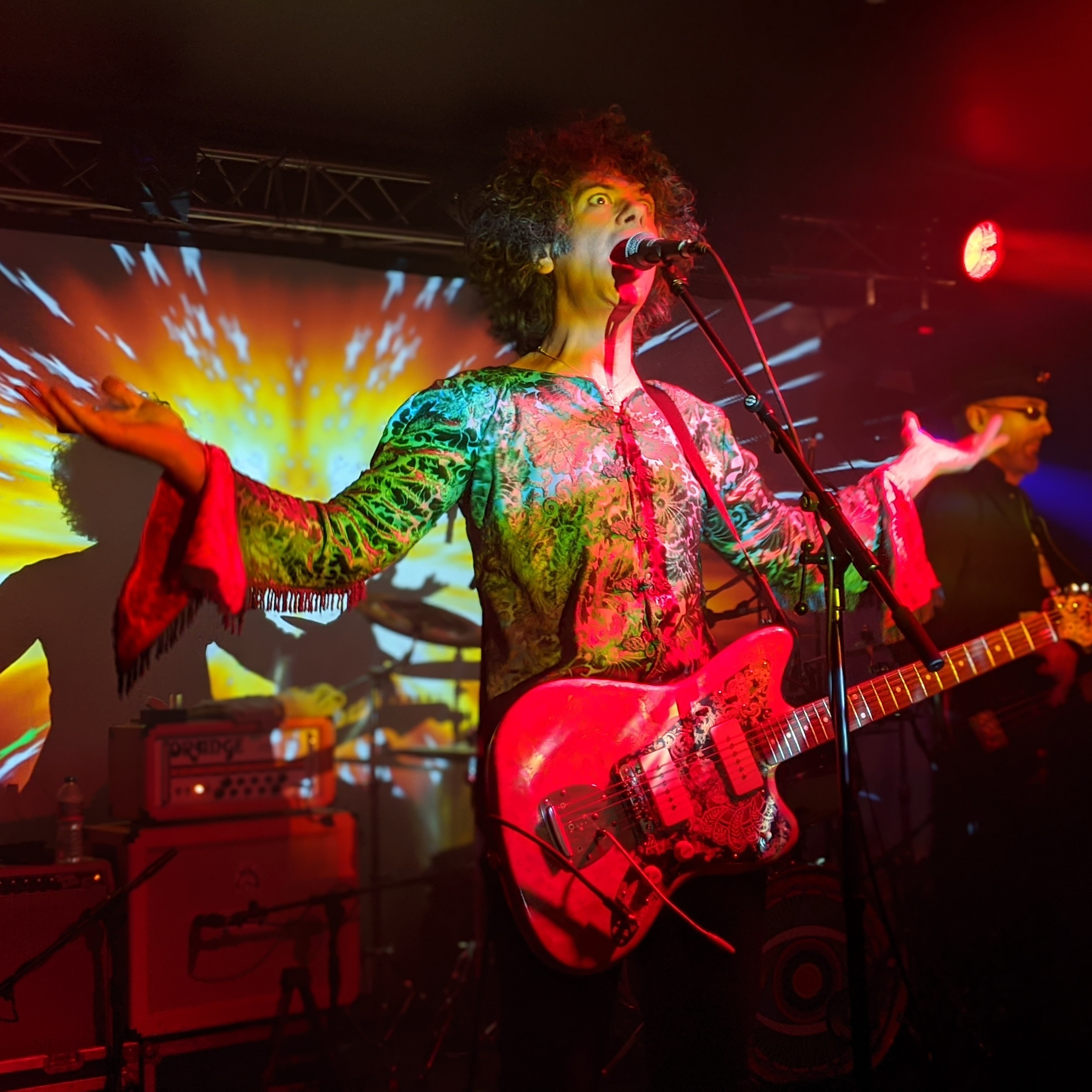 Gong took the stage at exactly 7:30 – one of the problems of the internet age is that you know exactly what they are going to play because you’ve seen it on various sites from the rest of the tour. So I knew that they were going to start with Forever reoccurring from the new album. The band seem to being going from strength to strength and getting better with every gig. Kavus announced that tonight wasn’t going to be a nostalgia fest and true to form they only played one song from the early days.

There are some tremendous musicians in this version of Gong – from Fabio Golfetti on glissando guitar to Ian East’s sax and flute. Then there’s Cheb Nettles driving drumbeats and Dave Sturt’s pounding bass lines. But the main thrust of the band is Kavus Torabi on the guitar. He leaps around the stage pulling faces and shredding licks. At one point he jumped onto an upturned monitor speaker right in front of me and almost hit me with the end of his guitar!

I stayed put during the break not wanting to lose my spot at the front. I quite enjoyed watching the crew moving everything around anyway – not that there was much to do – they pushed Kavus’ pedals to the left and moved Ian’s microphone to the right and put the bit of stagedeck with Miquette’s synths in between them! I noticed that while Kavus had loads of effects pedals Steve only had one and that was wireless so a roadie literally plonked it down behind his microphone!

I don’t think I’ve ever been this close to Mr Hillage on stage (I obviously stood next to him backstage at the Newcastle City Hall in 77 and 79) I was in the second row when I first saw him but this was something else! I love being close enough to see people playing their instruments – in fact I struggle sometimes when I can’t! I could also see what Miquette Giraudy was doing with her stuff too.

The set was almost identical to the one he played in Manchester except he had added Om Nama Shivaya from L – meaning he is now playing almost the entire album EXCEPT Electrick Gypsies (I heard a few shouts for it so clearly I’m not the only one). The sound seemed a bit distorted at time but it was difficult to tell if it was the PA or Steve’s pedal! At one pint during the show Steve suddenly wandered to the back of the stage and the disappeared. Everyone thought he must have a technical issue as he was talking to a roadie and even the band were giving each other the “where’s he gone” look. 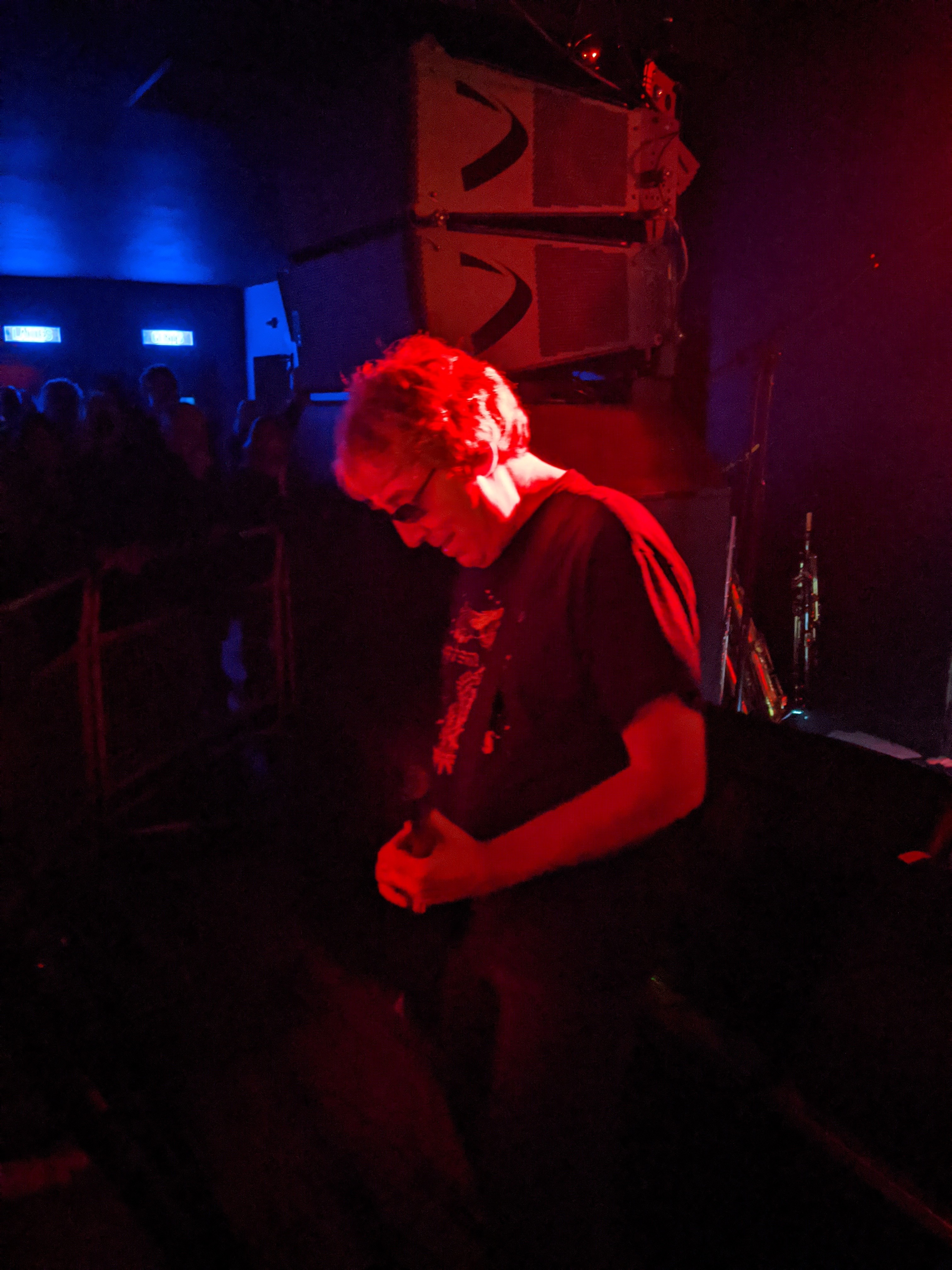 Suddenly he reappeared in the gap between the barrier and the stage, right in front of us where he continued the guitar solo he was playing when he left the stage! The band genuinely seemed to be enjoying themselves and there were a couple of time where Kavus was going a bit wild behind Hillage and I thought “if only you could see what was happening behind you!” I guess that now they have got a few gigs under their belt they can sit back a bit and have fun. 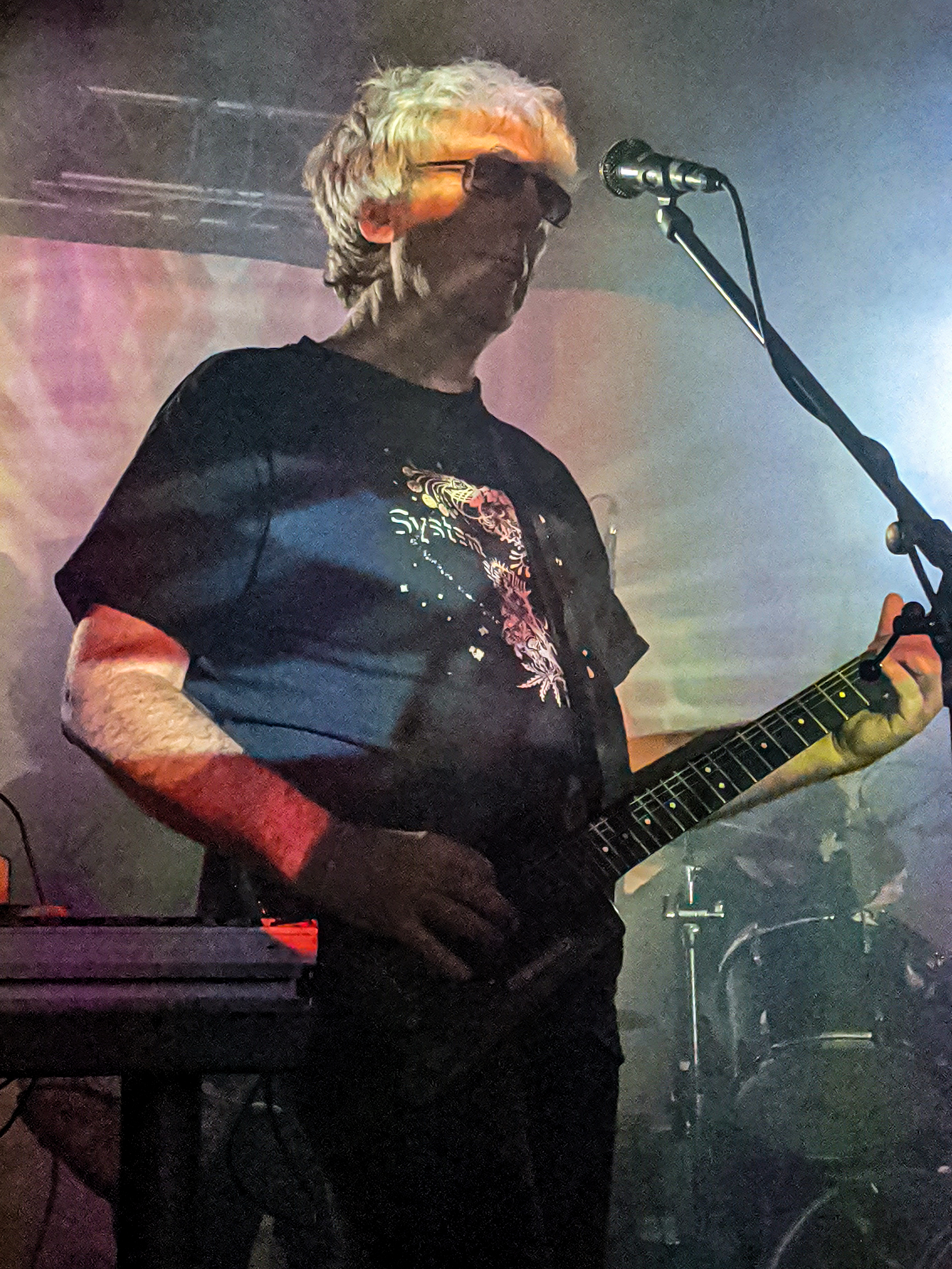 The biggest surprise foe me came right at the end when they came back on for the second encore. Even though I had checked the set lists I hadn’t spotted that there was a change at the end. Where they had played Not Fade Away in Manchester this time they played Hello Dawn from Motivation Radio which then segued into Never Glid Before with the Pot Head Pixie Projections as in Manchester – oh talking of projections, at least we got to see the opening one this time!

At the end of the gig I dashed to the loo and then looked at the merch stall – I had intended to buy myself a t-shirt but at the end of the day I just couldn’t decide which one as none of them really appealed to me. So I just headed back to find the car and the two hour drive home. On the way back I kept wondering what that strange noise I could hear was. I was obviously quite sensitive after the breakdown of a couple of weeks ago and was worried that there was something else wrong! It was only when I pulled up outside the house and turned the engine off that I realised that I could still hear it and that it was my ears ringing! (NB they rang for two days, I don’t think that has ever happened before, it must have been loud!) 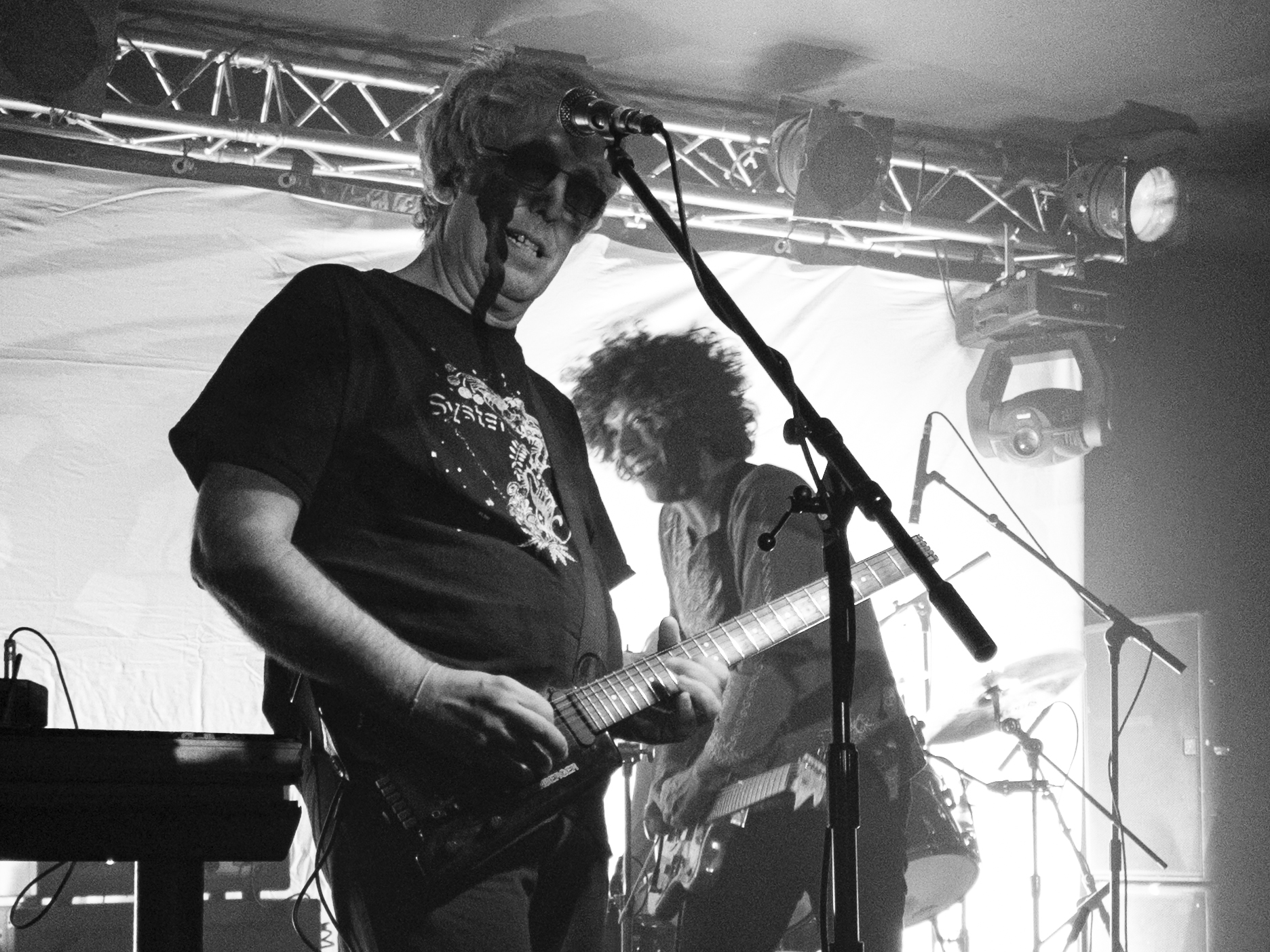