We were very very excited to find out that Kate Bush was not only going to tour BUT she was coming to Sunderland – playing at the Sunderland Empire on 12th April 1979. Then it dawned on us – Thin Lizzy were playing at the City Hall for two nights in April and as we usually did we’d bought tickets for the second night and that two was the 12th April – it wouldn’t have been so bad but we had really really good tickets for that show in the second or third row – bugger! What to do, what to do! 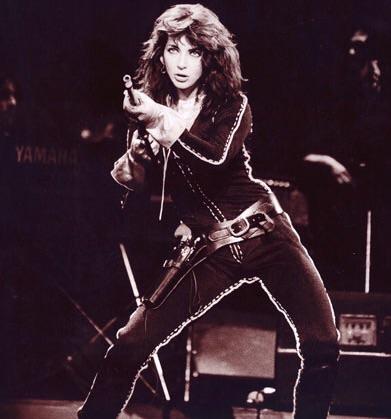 So my brother and I had a plan – we had an auntie who lived in Manchester and we could get a coach down to see her there and then stay overnight with our aunt and then get a coach back so we could go and see Thin Lizzy. There were only two minor problems – getting tickets and getting our parents to agree. Somehow we managed to do both! 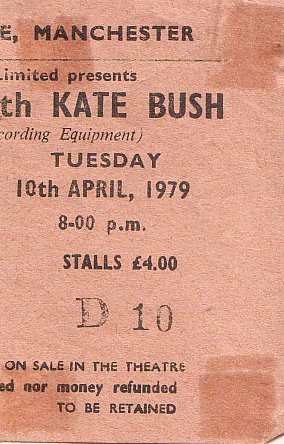 The Apollo is a little way out of the City Centre but we managed to find our way there and I remember when we went in that there were flyers on every seat from the Musicians Union explaining that during the performance a taped version of one of the songs would be used – this was Hammer Horror which had such a exacting dance routine that Kate couldn’t sing as well as dance. 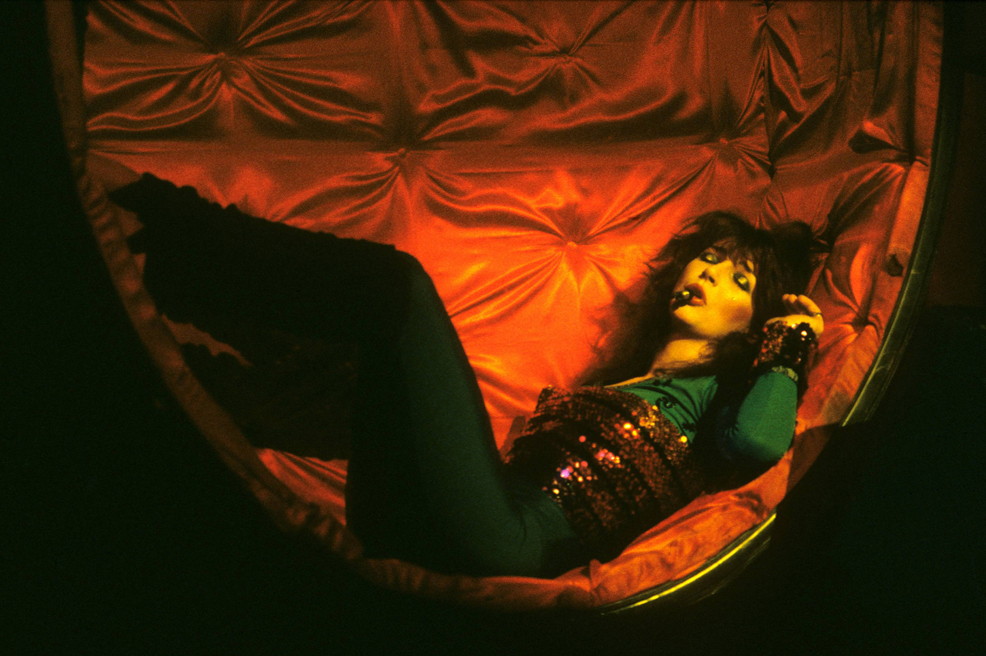 The show lasted nearly two hours and was a mixture of rock concert and theatre performance with lots of costume changes which sometimes needed a recorded poem or extended introduction to cover. There were props like the seat shown above or a ramp that lifted up during James and the Cold Gun (the highlight of the show for me) and dancers who either danced with or on one memorable occasion picked up Ms Bush much to the delight of the crowd! 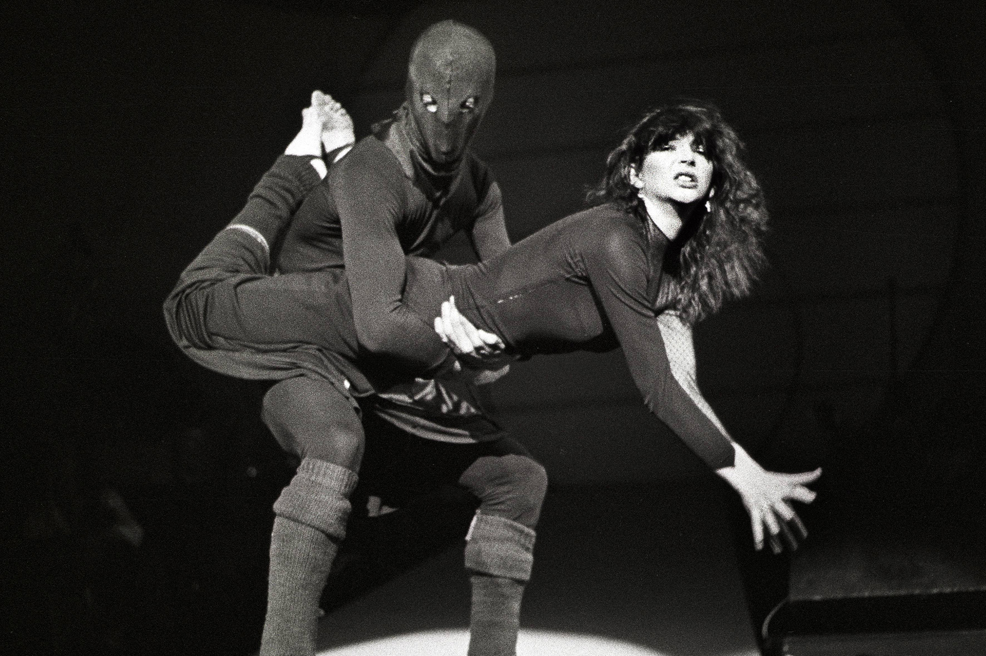 I remember there was a strict no recording equipment or cameras policy but this mustn’t have been very well enforced because there is an audio bootleg of the Manchester show and I found a couple of videos from the night online including the encore which was, of course, Wuthering Heights.

I also recall that the guy next to me suddenly produced a camera with a long lens from somewhere and started to take pictures – I looked round at him and he smiled and whispered “well you have to don’t you!” – I wished I’d had my camera but knew I’d have been the one to get caught! 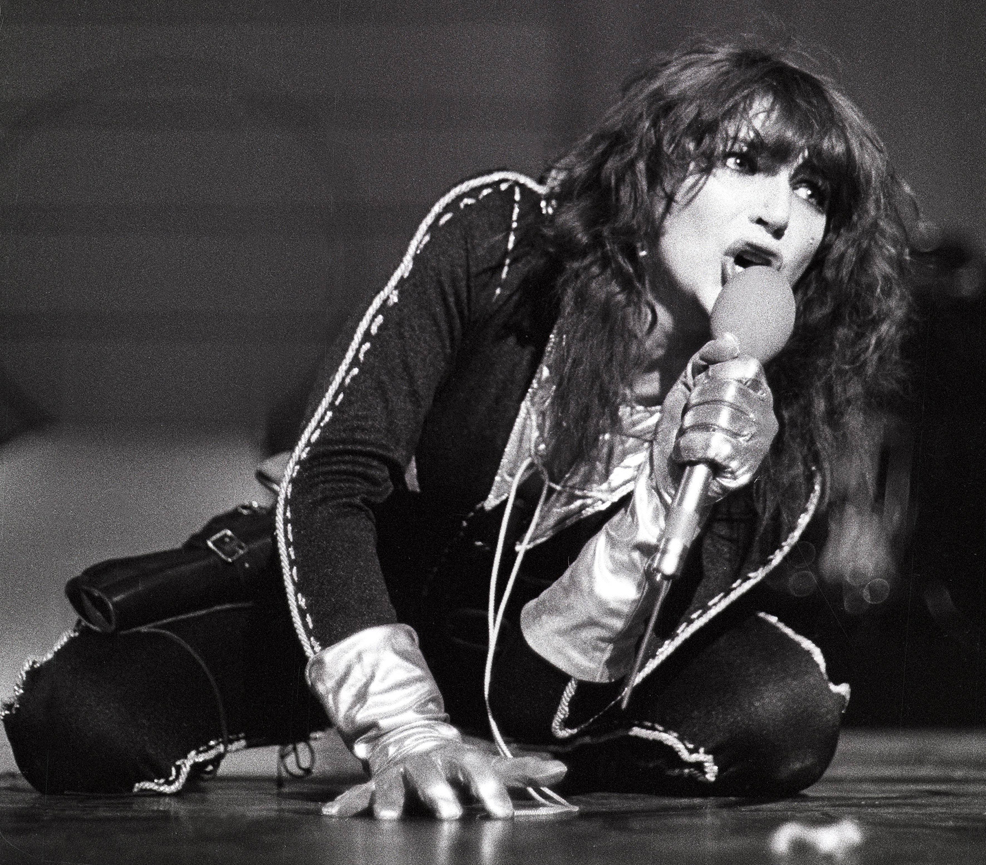 When the gig finished we came out of the front doors of the hall to find my Uncle Tom standing there – they’d come to pick us up and didn’t want to miss us in the crowd so had literally parked right outside the front door! We were whisked off to Wythenshawe and somehow we got back into the centre of Manchester to catch the coach home the following day. We were so pleased to see her and went off to our Thin Lizzy gig happy – except of course some of our friends went to the Sunderland show and got to meet her afterwards – rats!

After this tour she didn’t appear live on stage again until 2014 – a gap of 35 years and tickets for those shows were like gold dust so I am so fucking glad that my parents let us go to this gig all those years ago!

The pictures on the page are from the 1979 not necessarily the Manchester gig. Photographers unknown. More info on the tour here

There’s a recording of the show here

The Hammersmith Odeon show from this tour was filmed