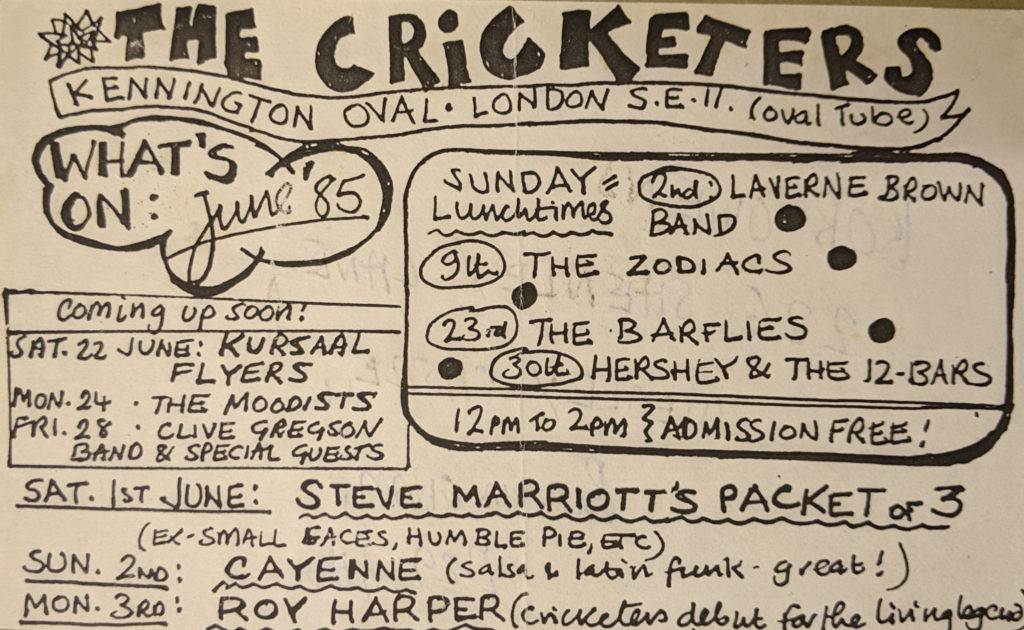 Just after I moved to London I discovered through Time Out that Roy Harper was playing in a pub near the Oval cricket ground so I decided to go. I must have finished work on time (6pm) that day and caught the tube down to the Oval. The reason I must have finished early was that when I got to the venue Roy was just getting the equipment out of his car. I was too shy to say hello or to ask if he needed a hand so I walked on and ended up going into the bar in the cricket ground for a beer.

As soon as I walked through the door I was accosted and asked if I was there for Roy by a young lady who I found out was called Mandy. I joined her at the table just inside the door and soon we were joined by many others including a chap called Bob Owens who followed Roy to almost every gig and always carried his world in a rucksack on his back! He was one of the nicest people I ever met and always had time for a chat. he was immortalised in a cartoon in the Hors d’oeuvres magazine called Bob’s Rucksack!

Eventually we went round to the venue and paid our £3.50 to get in. I saw so many Roy Harper gigs in the first few years I was in London that I don’t remember much about the actual gig but I do remember afterwards that I ended up talking to Roy’s girlfriend Jacqui with Mandy at the end of the gig. Mandy was upset about something and Jacqui was comforting her – I was mostly standing listening and trying to avoid looking at Jacqui’s chest as she was wearing just a string vest with nothing under it!

It turned out that Mandy wasn’t sure how she was going to get home (which was up north somewhere) so I offered to let her sleep at my friends house where I was staying. She wasn’t so sure and eventually decided to hitchhike home and I helped her get to Brent Cross and the M1. I felt awful letting go off into the dark night like that and was pleased when I finally bumped into her again in Sunderland later that year!