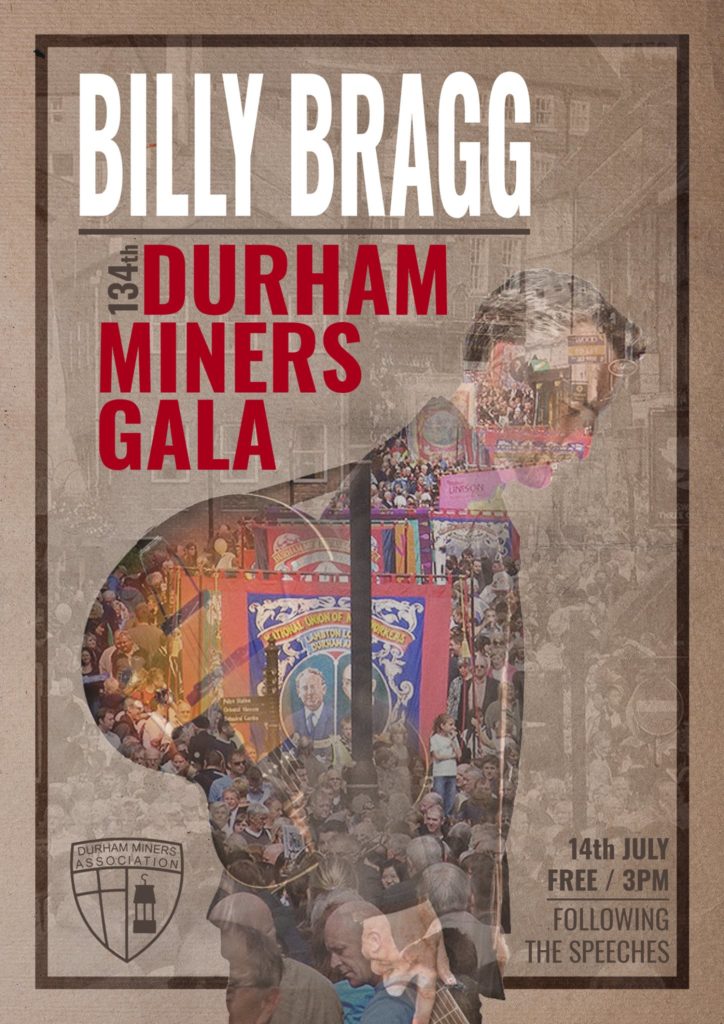 I went to the Big Meeting for the first time last year and was really looking forward to going again this year especially after they announced that in addition to the great line up of speakers Billy Bragg would be doing a set at the end. It’s ages sine I saw Mr Bragg – I first saw him at Glastonbury in 1984 and after I moved to London he was the first gig I went to at Stoke Newington Town Hall which I got into at a reduced rate as I still had my UB40!

I’ve decided to go on the bus as it will cost about the same as driving in, parking and then catching a bus into the centre. It also means I can have a beer! I suppose it also fits with Mr Corbyn’s recent dedication of the whole of PMQs to the subject a few weeks ago! Living in a rural area though I have to catch two buses – one from Tow Law to Crook and then one from there to Durham! It’s a red hot day and I’m melting by the time I get to Durham!

I make my way to the market place where the banners and bands are waiting to set off to the cricket ground. It’s nearly midday by now so there’s only a few left but the streets down over the bridge are still rammed. Last year we went the long way round to avoid the crush but this year, as I’m on my own, I decide just to make my way through and walk alongside the banners.

Once I’d got past the County Hotel my thoughts turned to beer! I remembered last time I’d bought a beer from a stall on the side of the road but alas this time when I get there the beer they are selling is John Smiths so I decided to give it a miss and I ended up in the bar of the Masonic Hall and got a pint from there instead. I made my way from there onto the cricket ground and had a quick look round the stalls. Sarah had wanted me to ask the people from the County Durham Socialist Clothing Bank a question so when I eventually found them I did. It was so hot in the marquees that I didn’t spend much time in there and instead headed off down the front to catch the speeches.

Things had changed from last year in that the stage had moved and it was now covered – just as well given how hot it was. It also had a better PA System and a big screen although the latter annoyed me all day due to the main camera not displaying correctly on the screen (it was a 16×9 camera onto a 16×9 screen which meant it should have fitted but it was letterboxed and therefore the image was squashed – bus man’s holiday!). What was lost though was the parade of the dignitaries through the audience and I wondered if this was due to the current political situation and the stage invasion during Corbyn’s speech last year! There was an area roped off at the front for the brass band and I was just behind that (meaning I was on the big screen a couple of times!)

The speeches seem to get longer every year but there were some good ones this year particularly from Emily Thornberry and Dennis Skinner. As ever Jeremy Corbyn finished off the speeches with a rousing address and a poem to finish!

On we march then, we the workers, and the rumour that ye hear
Is the blended sound of battle and deliv’rance drawing near;
For the hope of every creature is the banner that we bear,
And the world is marching on.

The March of the Workers – William Morris

Once the speeches had finished Billy Bragg was due to appear on the main stage so while they reset the stage people all glanced around to see if anyone else was moving from the rope barrier to the main barrier – as soon as one person did it everyone poured forward meaning I was again right near the front.

Once all the chairs had gone Billy Bragg appeared holding an acoustic guitar and as it was connected to the sound desk using a wireless transmitter he started almost as soon as sound came out of it! He played a short set but on that did include some great songs. The highlight of the set for me was the song Between the Wars which I first heard (I think at Glastonbury 1984) over thirty years ago and which had tears streaming down my eyes that day. It’s sad that after all this time the song is even more relevant than it was back during the Thatcher era and the Miners strike. I once again had tears in my eyes and as I looked around it was obvious I wasn’t the only one! I just hope that in another thirty odd years we will have finally moved on!

At the end of his set which included a Woody Guthrie song and a rewritten version of Bob Dylan’s Times they are a changing he left the stage after another one of his powerful songs Power in a Union – there were many cheers for an encore and he returned to explain that he doesn’t get to come to the Big Meeting very often as it usually clashes with the Tolpuddle festival but this year they are on different days so he was pleased to be invited. He then finished off as he said he does at Tolpuddle with a verse and chorus of the Red Flag.

Sexuality
Which Side Are You On?
Waiting for the Great Leap Forwards
Between the Wars
All You Fascists Are Bound to Lose
The Times They Are A-Changin’ Back
Solidarity Forever
There Is Power in a Union

After Billy Bragg I wandered back to to the back of the field but everything was starting to pack up. I then decided that I’d head back into town and the bus station to catch the 17:10 bus back to Crook. I followed the banners and the bands back again

I ended up at the Station House Hotel where I had a lovely pint of cider – just what I needed to cool down after sitting in the hot sun for so long. I love this pub – I wish it was closer!

I caught the buses home and once again I was reminded how lovely people are in this part of the world. Complete strangers stopped and talked to me in Crook as I waited for the second bus and the bus driver was lovely and seemed to know many of the passengers and had a chat with a couple as they got on or off. On top of the great day in Durham I was feeling so good when I got off the bus at Tow Law but this was about to come crashing down…

At the Gala there were people giving out “Bollocks to Brexit” stickers and I had one stuck to my t-shirt. No one had said anything at all till I went in the Co-op and some one tackled me. “Bollocks to Brexit, it’s not a done deal? What’s that all about?” he demanded. Well it’s not a done deal is it I replied. He wandered off mumble mumble mumble Muslims mumble mumble. Ah your true colours are showing I replied bravely but I was now shaking inside. Then later on the local pub shared a video of an apparent incident at the Gala – some right wingers had turned up to cause as much trouble as they could and were escorted away from the cricket field. They of course posted the video of them being removed and claimed it was because they were flying the Union Flag (turns out some of them were from a group called For Britain which even Nigel Farrage had called Nazis and Racists! and had been posting on Facebook saying they were going to cause trouble at the Gala) – Suddenly the Fascists seemed to be winning and I started to see #freetommy stickers – I despaired!

As a sad footnote to this story I was hoping to meet up with my friend this year as she was unable to go last year due to personal issues. I was excited when I found out that Billy Bragg had been added to the line up and went onto Facebook to tell her. When I did I found out that she had taken her own life a few days earlier due to just not wanting to go on. I went to her funeral a few weeks ago and thought about her today. Sometime’s life is a bitch!