This caused me a great deal of confusion when I was sorting out the photographs from my 1989 trip to write this page over 30 years later. When I looked in the book we had used as a guide the logical first stop was Tomnaverie but all of the pictures I could find on line looked like the one above whereas mine looked like this 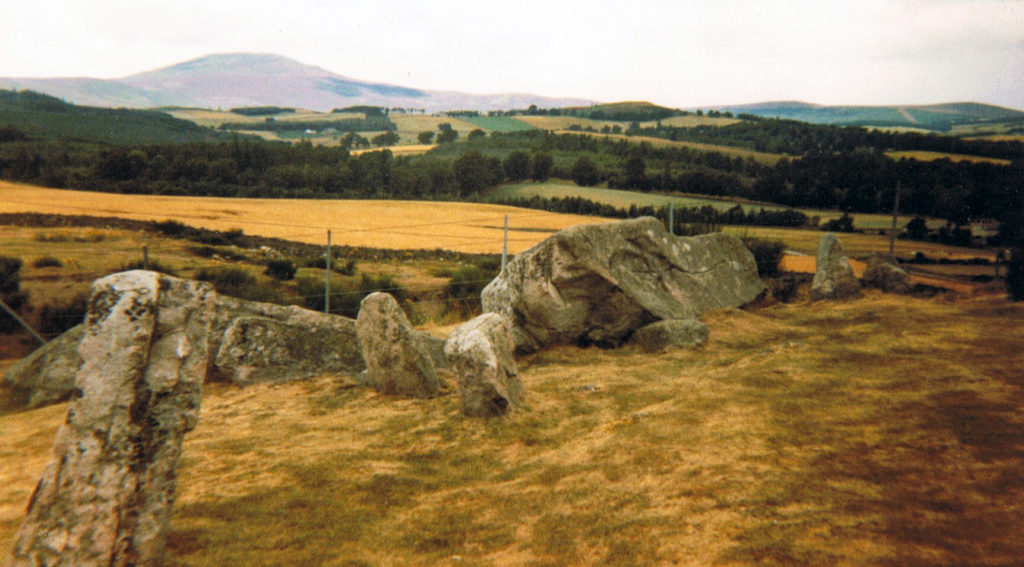 Which of course looked nothing like the one I was now looking at, there was a recumbent stone but the two flankers were missing and from what I could see the ground dropped away sharply behind what appeared to be the recumbent stone. None of the pictures I took showed a recumbent with two upright flankers and I was pretty sure I wouldn’t have gone there and failed to take a picture of what was the  most obvious feature especially as there wasn’t one from either camera I had used. I looked in the Bord’s book  but the picture  didn’t help at all! The Julian Cope book didn’t even have a picture!

Eventually I solved the mystery when I looked on Wikipedia and discovered that the site had been excavated ten years after I’d visited and as part of that excavation they had restored the flankers either side of the recumbent stone in the photo I’d taken. The site when we visited had been in a pretty sorry state, there was a quarry eating away at the hill and the work in the quarry over the years had caused (accidentally or deliberately) the two flankers to be toppled and the recumbent stone to be turned onto it’s side. 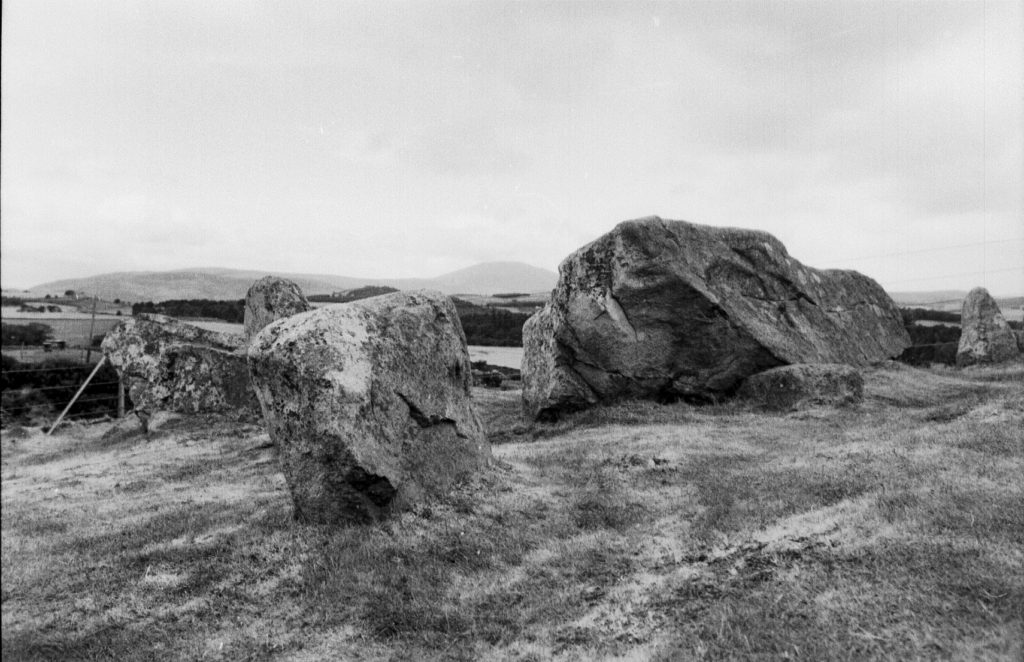 In 1999 the site was excavated and once the turf and surface soil removed it became clear that the interior of the circle was much better preserved than had been expected. The excavation showed that the hilltop had first been used for pyres and eventually this created a mound of burnt residues, including cremated human bones. This mound had later been surrounded with rubble and boulders to form a polygonal cairn and the rubble had been extended further outward to make a roughly level platform over the summit of the hill. The excavation showed the cairn seems to have been constructed so as to prepare the way for the circle to be added in a pre-arranged alignment – this has since been demonstrated for other recumbent circles. It had previously been expected the cairn would have been built after the circle. 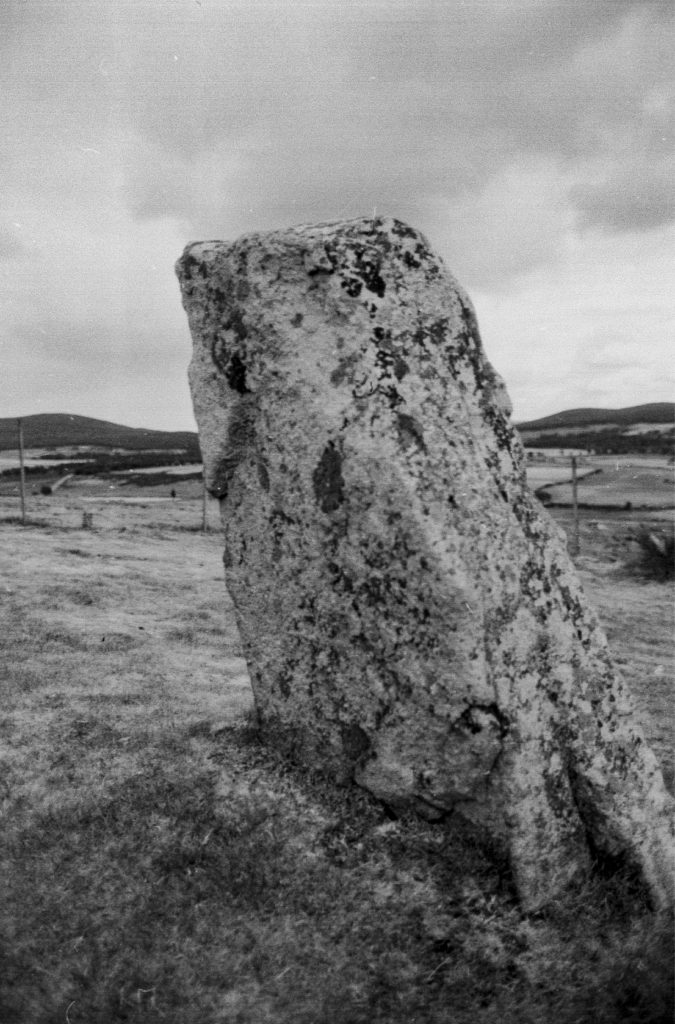 The circle is 56 ft across with the recumbent stone and its adjacent flankers looking southwest. The recumbent is a granite block 10.5 ft × 3.3 ft × 3.8 ft (length x thickness x height) and weighing 7.2  tons. The granite is intruded with quartz so as a whole this massive stone has a lighter colour than its attendant stones. It has two cup marks, one on its top and the other on its outer face. Apart from the recumbent and flankers, originally there were ten other stones but two of these, both to the northwest, are now missing.  A stone to the southeast is light grey in colour whereas the others, and the flankers, are pale red. In 2003 part of the quarry was back-filled and the area was landscaped. When viewed from across the circle the recumbent, now restored to its original position, points to the mountain Lochnagar.  It is also the position where the full moon sets at midsummer.

(above information from the Wikipedia entry) 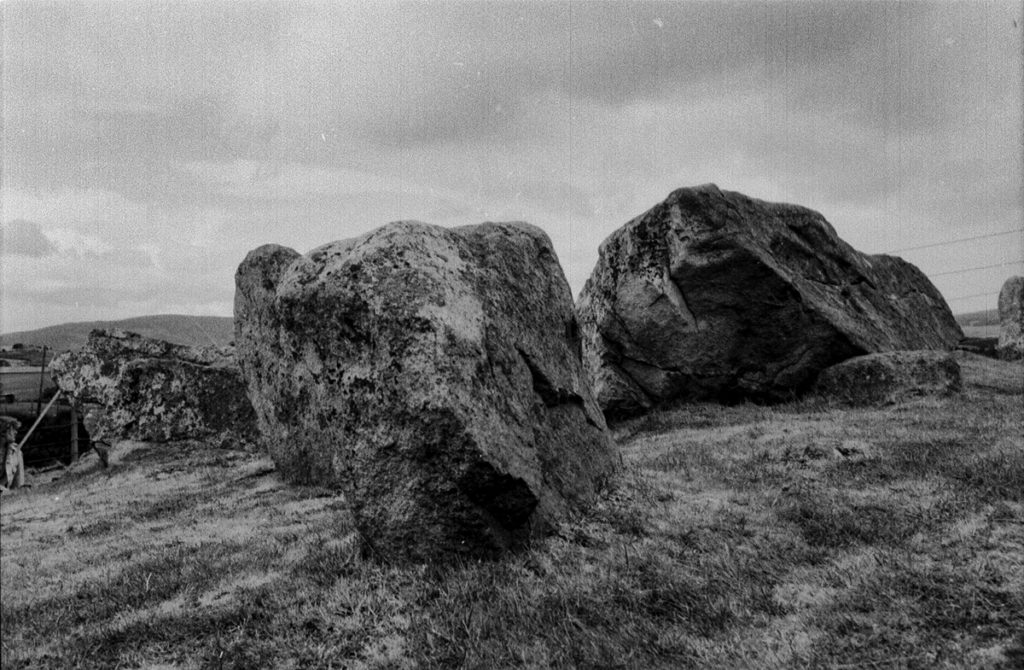 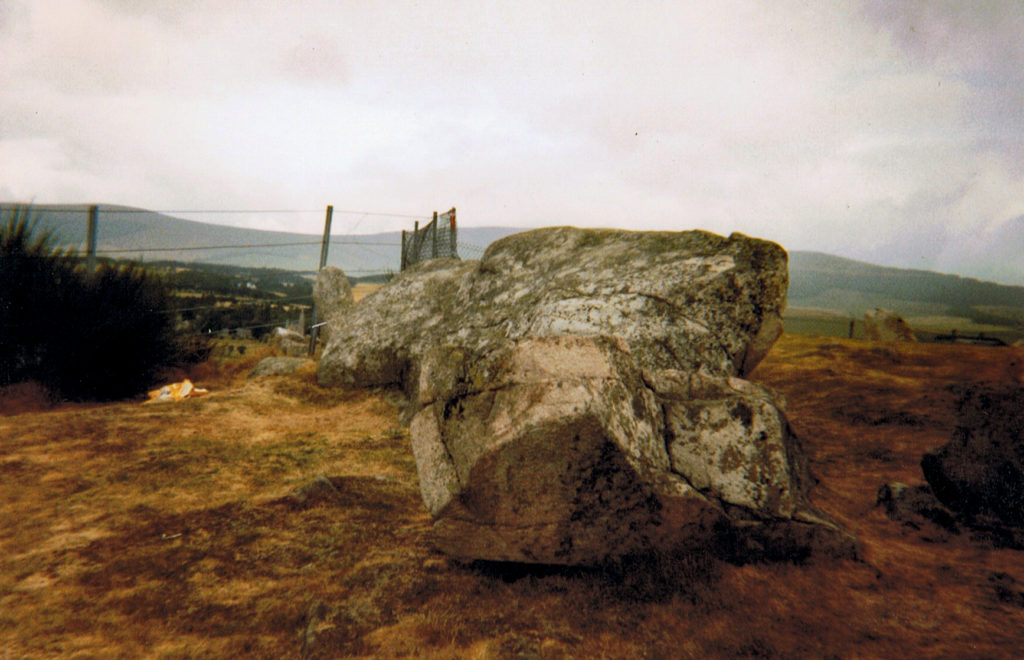 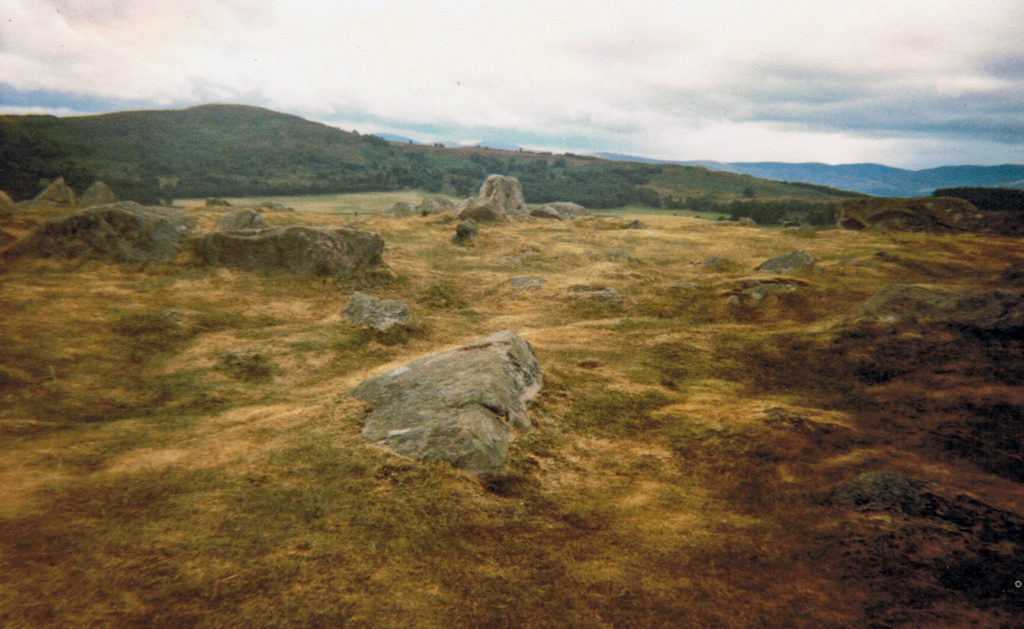