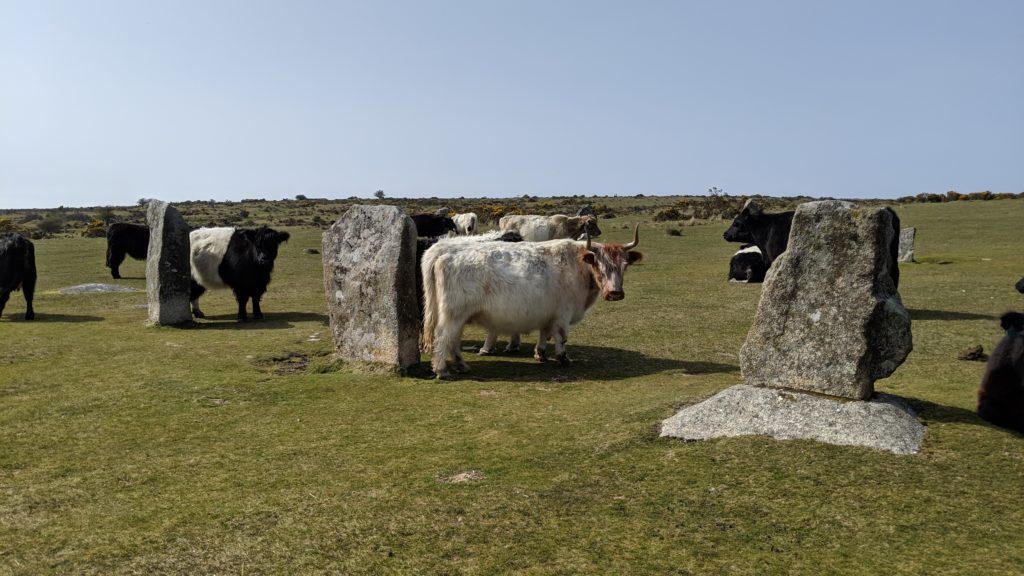 We had been down in Cornwall for a few days on holiday and my wife asked me where I would like to go on the way back, she suggested Glastonbury but I said I would like to go and visit the Cheesewring and the Hurlers up on Bodmin Moor because the previous attempt I’d made to see the Cheesewring, around 2000 with my previous wife, had been curtailed because as we tried to walk from the Hurlers we were suddenly caught in a giant hailstorm which beat us back to the car.

I’m pretty sure that the hail stone visit was my second visit to the Hurlers however I can’t remember the circumstances surrounding the first (possibly the eclipse in 99) but I’m pretty sure the reason we went back was to go to the Cheesewring. I know that second visit was in October because I remember us staying the night on a campsite in Tintagel and the owner being very concerned for us in a tent as there were strong winds forecast. We slept through it all and were very surprised to find so many trees down the next morning. I also remember that we got to Minions very early because we’d forgotten to put our clocks back! 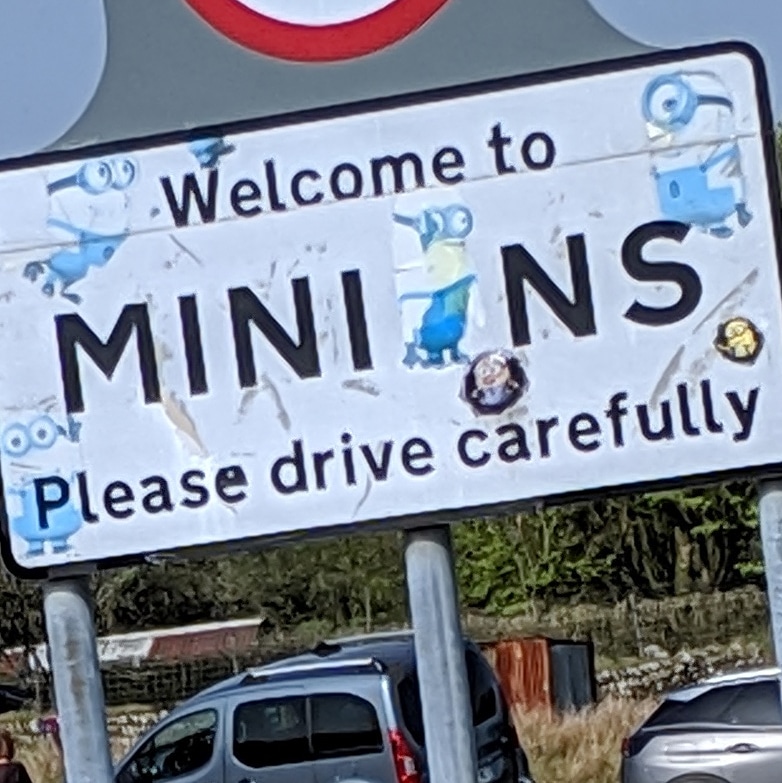 On the two previous visits we had had the site pretty much to ourselves(certainly the second time) but this time we visited on Good Friday and the weather was beautiful so the site was very busy. We struggled to get parked but we eventually found a space and headed off to find somewhere to eat our lunch. this was next to one of the old mills that surround the site, again I didn’t remember them from the previous visit. The Mill in question had a sign that said Minions Heritage Centre but it was closed! So we sat nearby and ate our lunch. 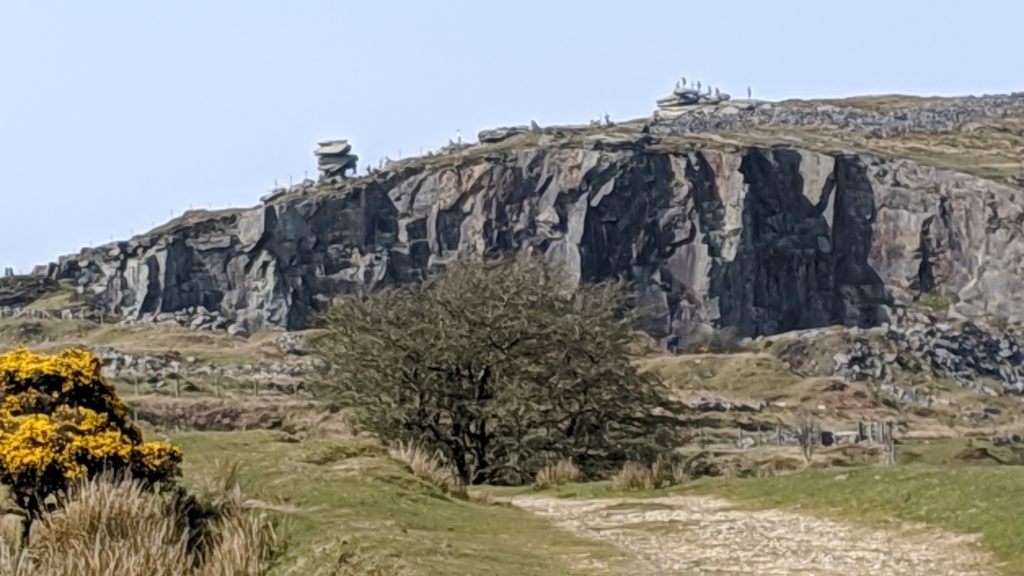 After lunch I said I would like to go to see the Cheesewring first as I hadn’t been there before. We set off but as soon as we rounded the corner I realised that I wasn’t going to be able to get Sarah to climb up to where it was so after some discussion it was decided that She and ben would head off to the Hurlers and then meet me back at the car. So me and dog dog pressed on. It was quite ironic after being forced back by the hailstones last time that this time it was the heat that almost defeated us! However we pressed on and soon were at the foot of the hill where the Cheesewring sits. 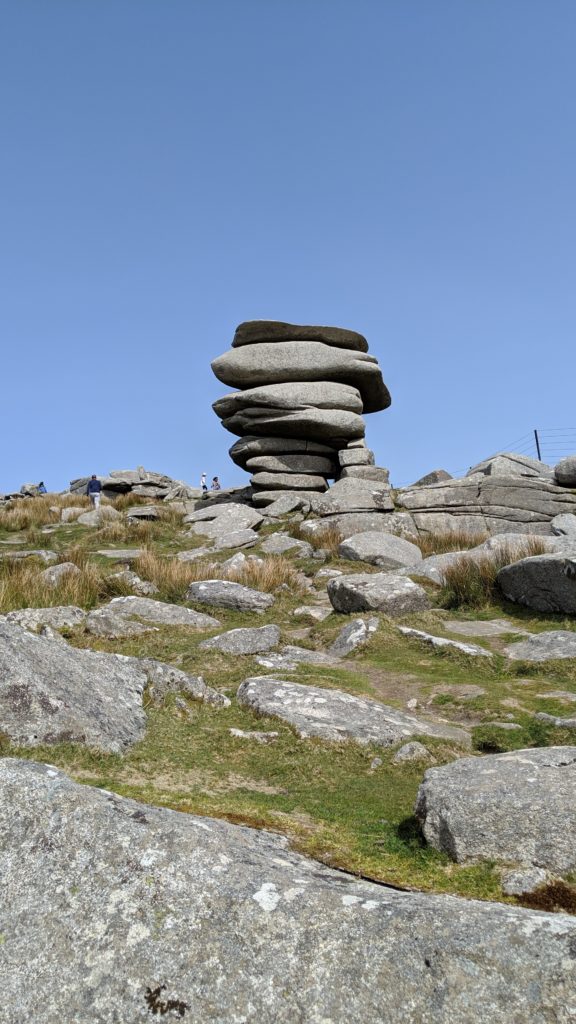 We were able to climb up to the top and enjoy the wonderful views both of the Cheesewring itself and of the surrounding area. We sat down and I got the dog to drink some water before we headed back down the hill for the walk across the moor to the stones. This was the walk (albeit in the opposite direction) we had tried to do last time but ended up getting caught in the vicious hailstorm! When we arrived at the stones it was difficult to see the three circles properly because the field was full of cows and horses! I was a bit wary because dog dog isn’t particularly fond of either but today see seemed to be ok, perhaps she knew she was out numbered! 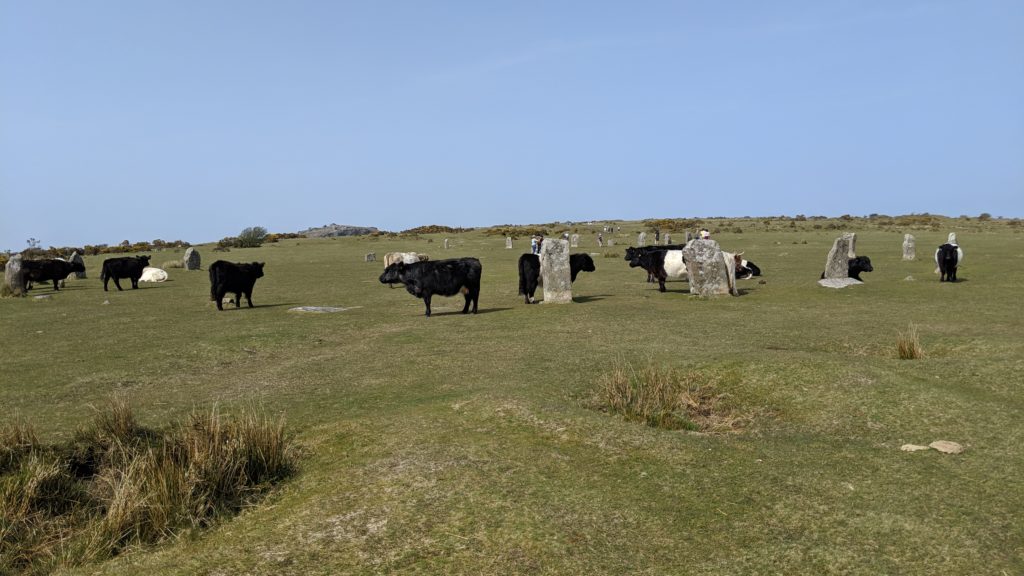 I wandered around taking photographs but one thing that did annoy me though was a family was playing cricket using one of the stones as a wicket. Firstly its disrespectful, lots of people see these sites as sacred sites and people wouldn’t dream of using an alter in a church the same way but also who would drive all the way up to Bodmin Moor just to play cricket? We headed back to the car and continued our journey! 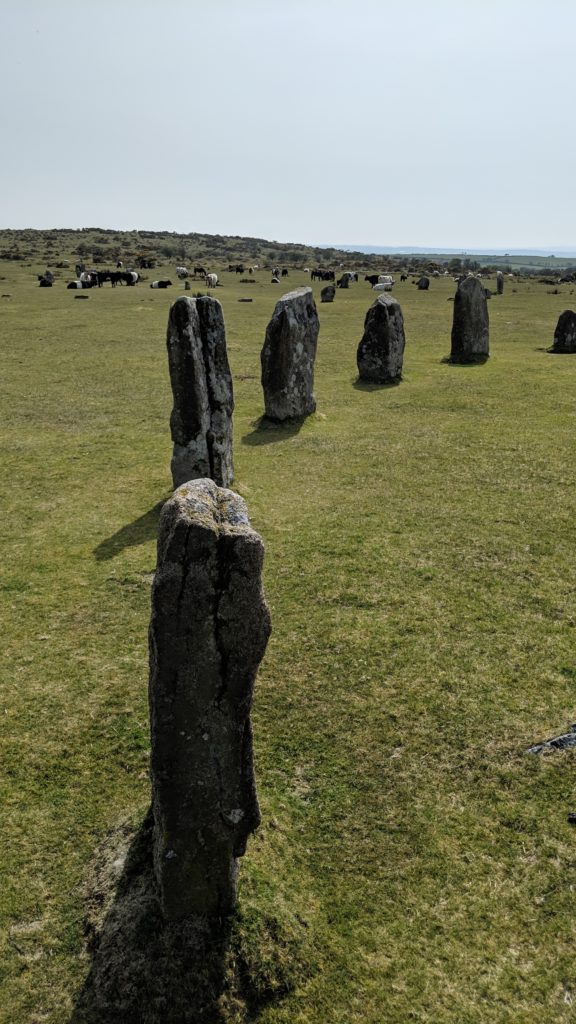 EDITED TO ADD: I have found the photographs of previous visits and it turned out that we had seen the Cheesewring before!  I think we didn’t see it the first time so we went back and were on our way over the moor when the hailstones struck – we must have got further than I previously thought! 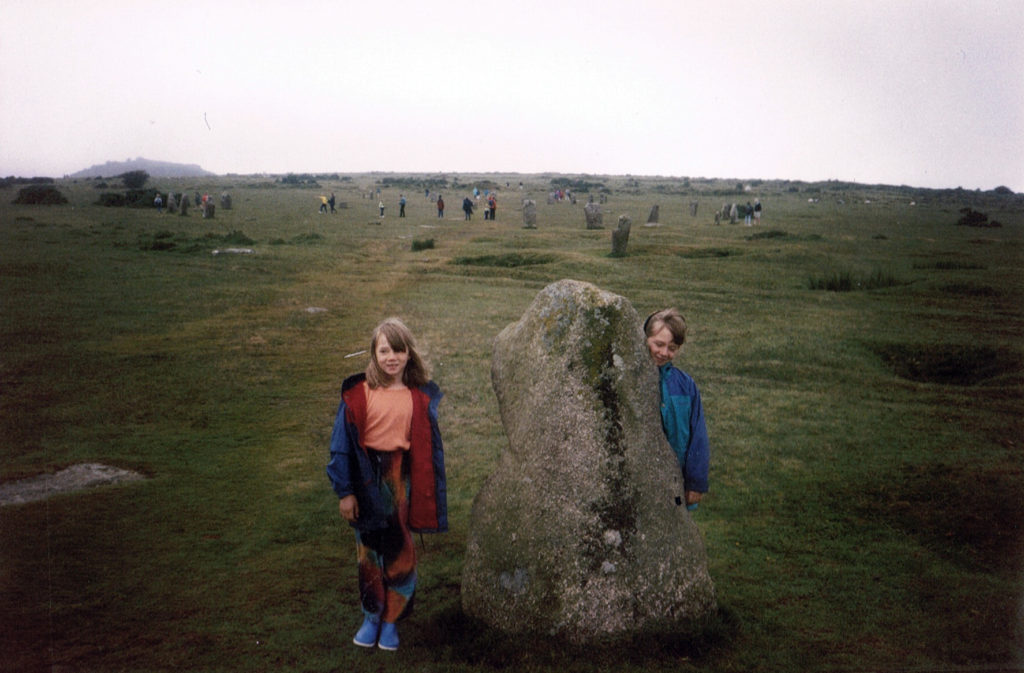 The Hurlers are a group of three stone circles on the edge of Bodmin Moor, the two outer circles are circular but the centre one is elliptical – the lie on a line from SSW to NNE, and have diameters of115 ft, 138 ft and 108 ft. The southern stone circle now contains nine stones but only two of the remaining stones are upright and the other seven are partially covered with soil. In the middle circle 14 stones survive out of 28. The stones show clear traces of being hammered smooth. The northern stone circle contained around 30 standing stones, from which 15 are still visible.Two other monoliths, the Pipers, about 300ft southwest of the middle circle and may be entrance stones to the Hurlers. 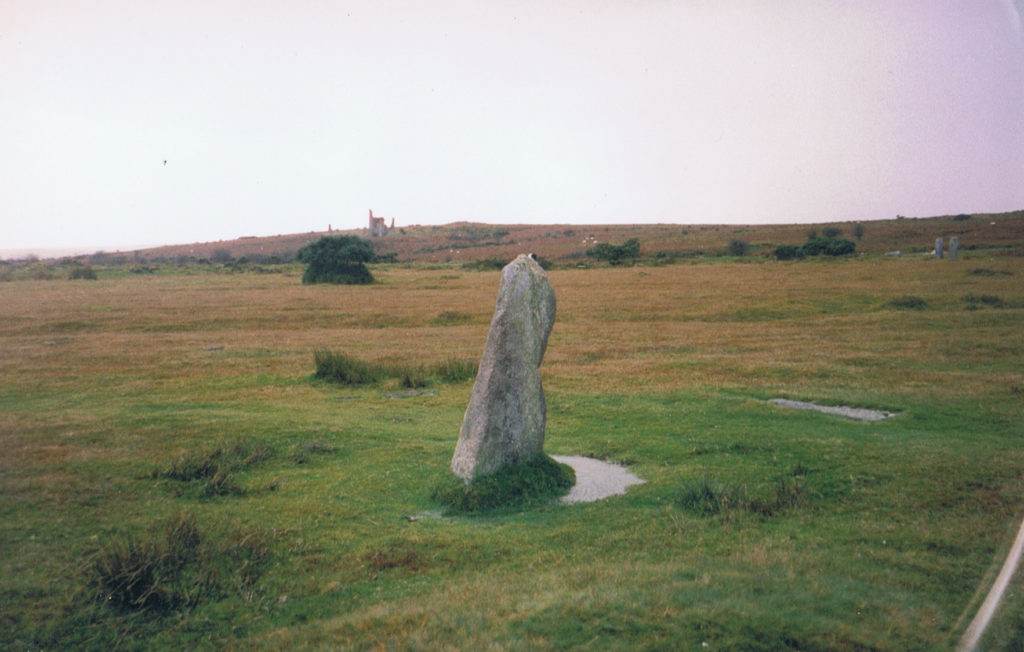 The name “Hurlers” derives from a legend, in which men were playing Cornish hurling on a Sunday and were magically transformed into stones as punishment. The “Pipers” are supposed to be the figures of two men who played tunes on a Sunday and suffered the same fate.  According to another legend, it is impossible to accurately count the number of standing stones. 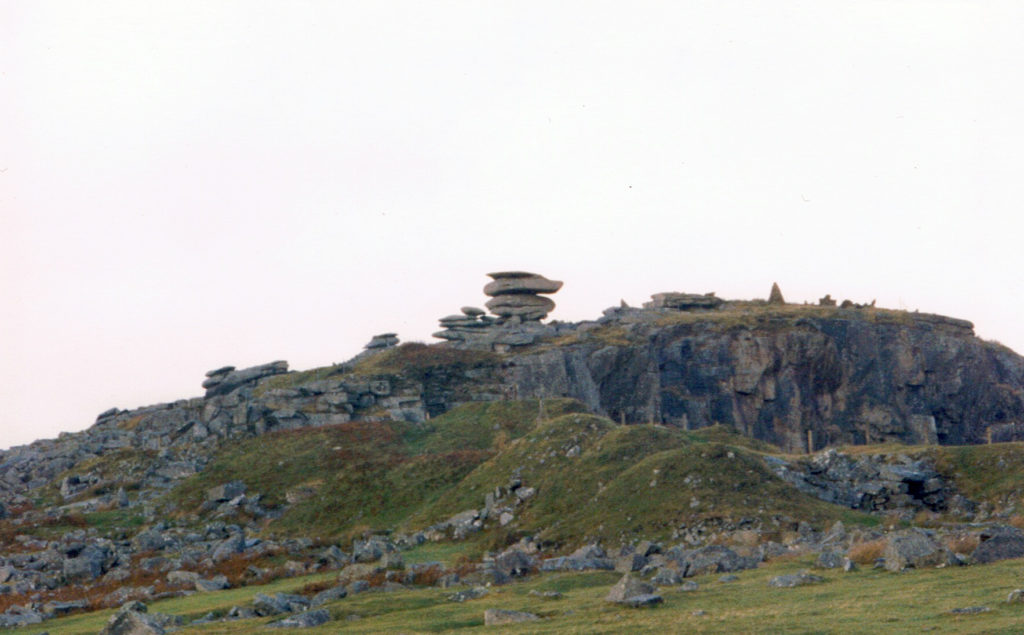 The Cheesewring is a granite tor in Cornwall, United Kingdom, situated on the eastern flank of Bodmin Moor. It is a natural geological formation, a rock outcrop of granite slabs formed by weathering. The name derives from the resemblance of the piled slabs to a “cheesewring”, a press-like device that was once used to make cheese. Located adjacent to the Cheesewring Quarry (which supplied the granite cladding for the structure of Tower Bridge, London) and surrounded by other granite formations, this landmark was threatened with destruction in the late nineteenth century by the proximity of blasting operations, but was saved as a result of local activism. 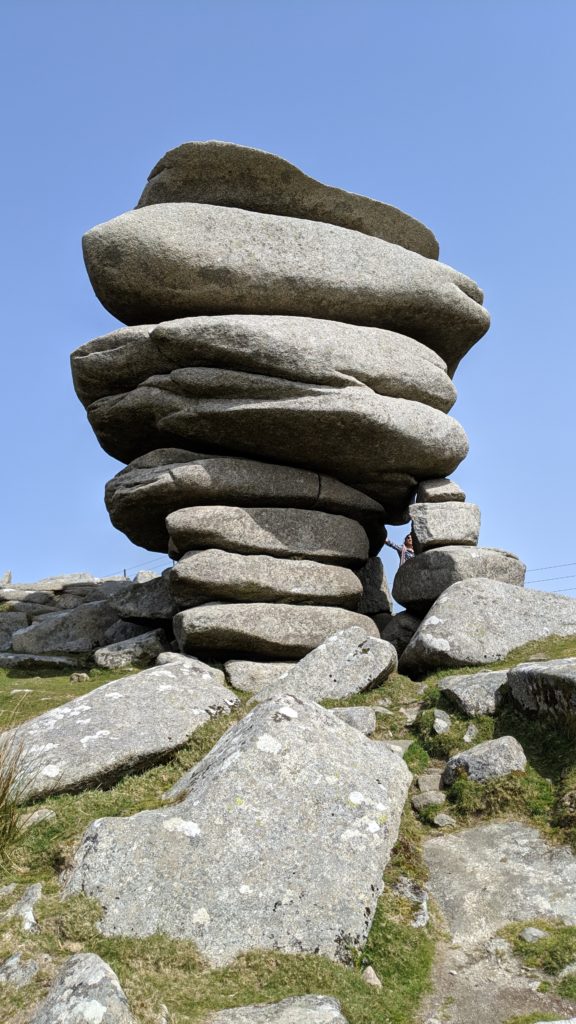 A local legend says that the Cheesewring is the result of a contest between a man and a giant. When Christianity had just been introduced to the British Islands, the giants who lived at the top of the mountains were not happy about it. The saints had invaded their land and were declaring their wells as sacred. One of the larger giants, Uther, was given the task of ridding their land of the saints. He confronted the frail Saint Tue, who proposed a rock throwing contest. If Uther won, the saints would leave Cornwall. If Saint Tue won, then the giants would convert to Christianity. Uther took his turn first and easily threw a small rock to the top of nearby Stowe’s Hill. Tue prayed for assistance, and picking up a huge slab found it was very light. One after the other, they threw their rocks, stacking them up in perfect piles. When the score was twelve stones each, Uther threw a thirteenth stone, but it rolled down the hill. Tue picked up this fallen stone, and as he lifted it, an angel appeared to carry it to the top of the pile of rocks. Seeing this, Uther conceded, and most of the giants decided to follow Christianity after that. 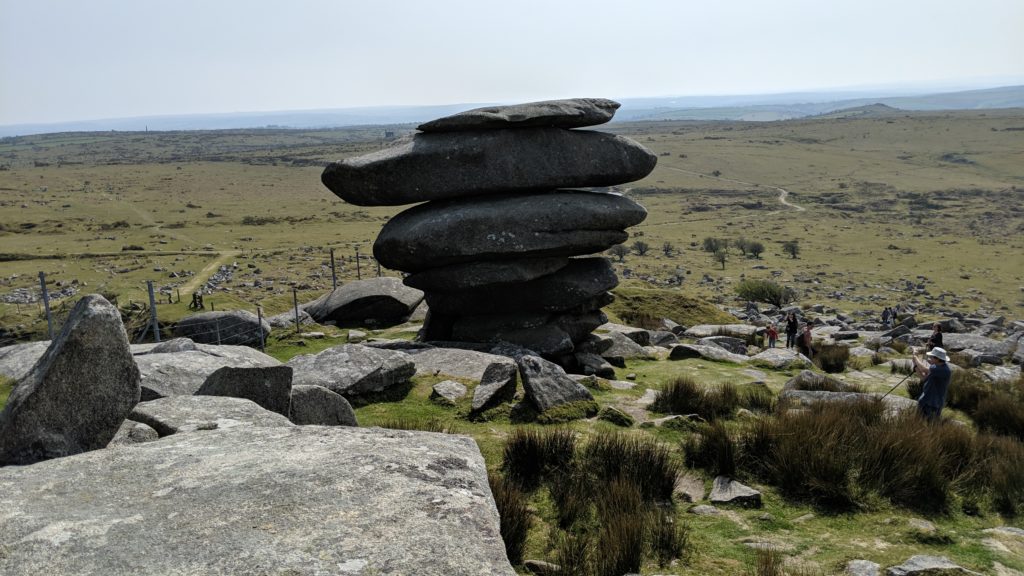 Curiously I photographed the same stone on all three visits: 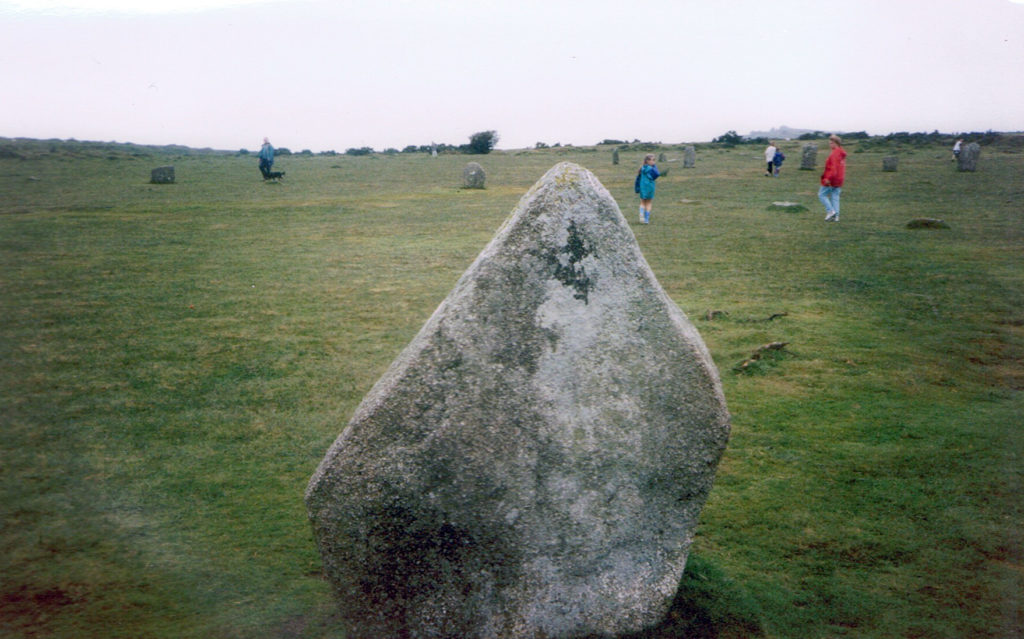 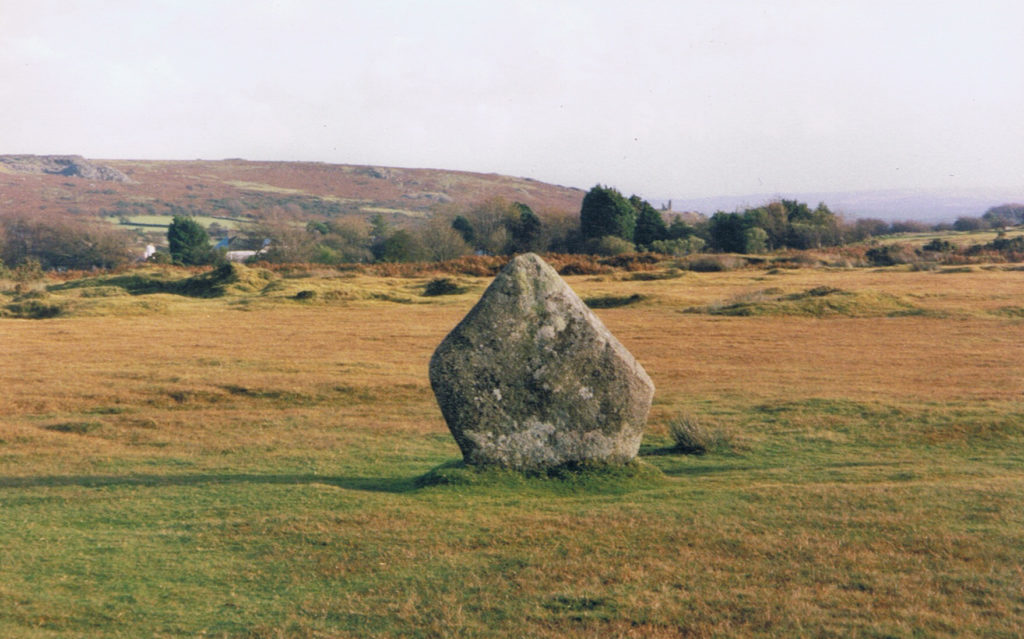 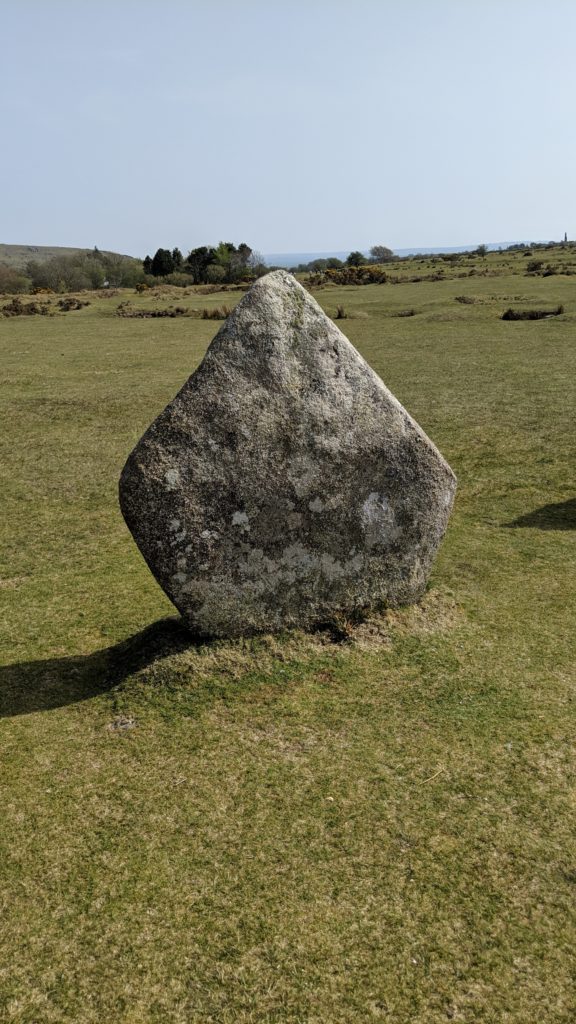