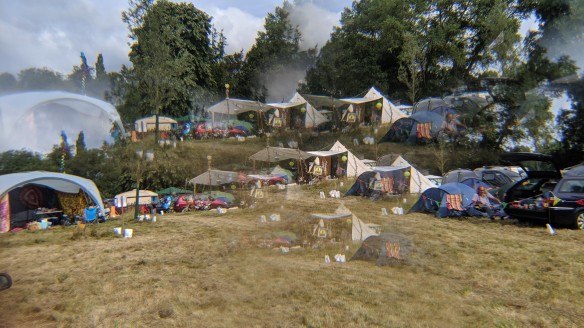 I woke up about half 5 needing to go to the loo and if you had asked me a minute before I got up the second time if I’d been back to sleep I’d have said no but when I looked at my phone it was half 8! I jumped up and got dressed and found myself crawling out of my tent at exactly the same time as the sound guy Jay! We both looked at each other and said “there better be breakfast today!” I realised that I was hungry and it dawned on me that except for a few nibbles i’d had left over from the stuff I had brought with me I hadn’t had anything to eat all day yesterday! So bacon egg, sausage and a roll washed down by a coffee was just what i needed – no beans obviously!

Afterwards we reset everything ready for the second day – the DJs started at ten and the first band was on the second stage at 11 – they were the Big Uke Jam (BIG stands for Biddenden and Iden Green apparently and there was me thinking it referred to their numbers!) I nipped up and took a few pictures but didn’t hang around long! 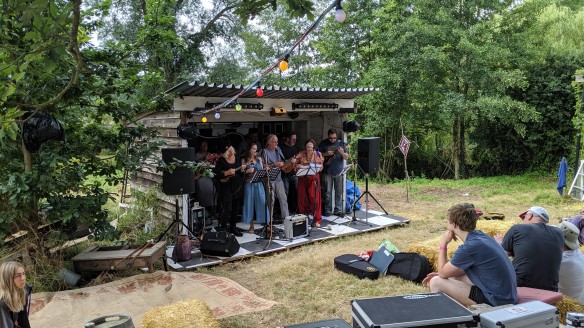 The first act on the main stage was old friend Barry Melton who was doing an acoustic set with Stephane Missri and John Roberts on the spoons! His set was very similar to the ste he did here last time with Banana at least that was how it felt! After Barry there was another act on the second stage – I think he was called Jamie Ewing and was the guy who had swapped from yesterday. 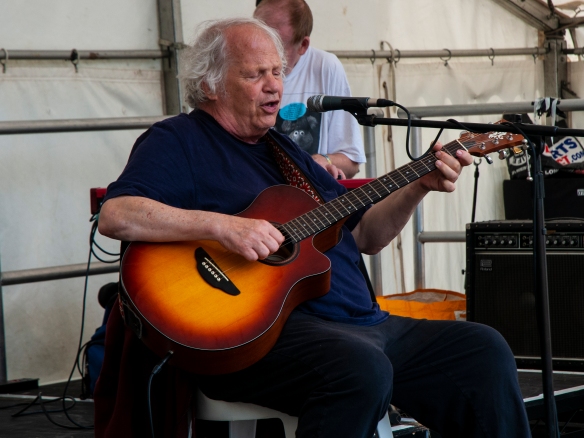 Then we had the Terrapins on the main stage – our third Grateful Dead cover band of the weekend. Their set was good especially the Eyes of the World but ironically one of the highlights was a Bob Dylan tune which even more ironically I’m not keen on Dylan singing! 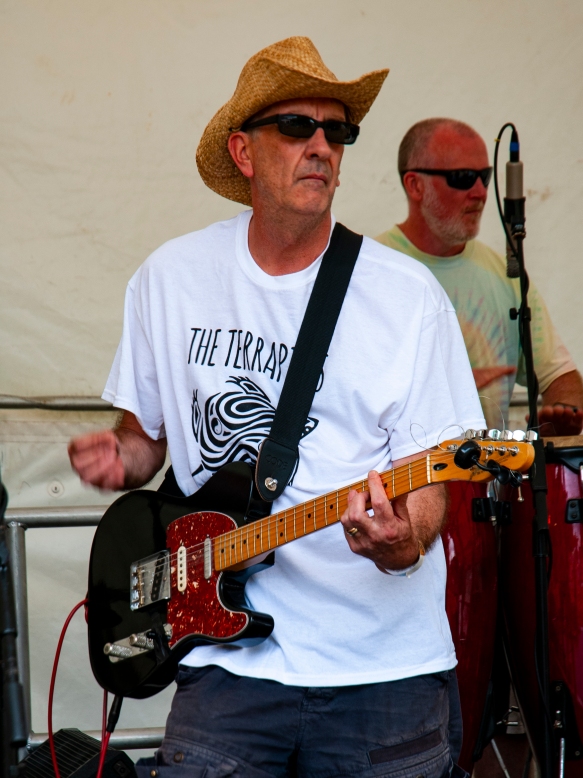 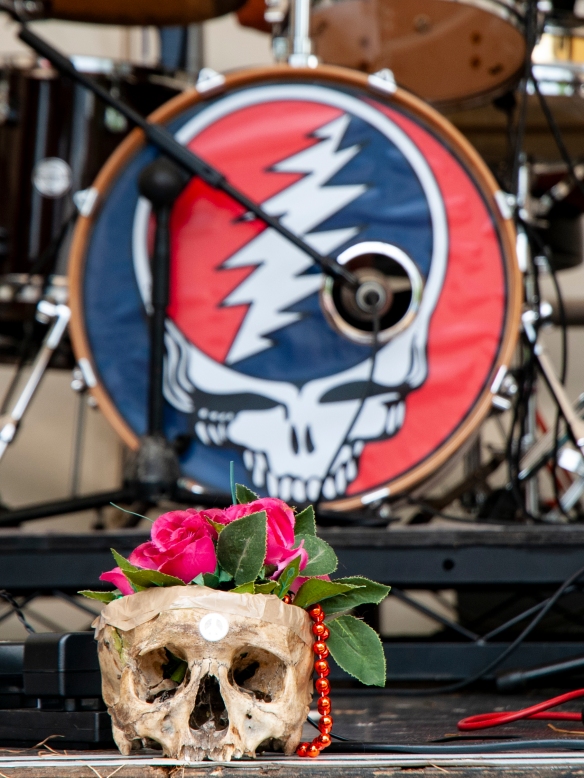 Afterwards I watched a bit of Chris Parris on the other stage. Chris has played SoL many times both solo and with his band but today didn’t seem to be one of his better days – it turned out that he had had food poisoning the day before which obviously didn’t help! I had planned on taping his set but it was probably just as well I didn’t bother! 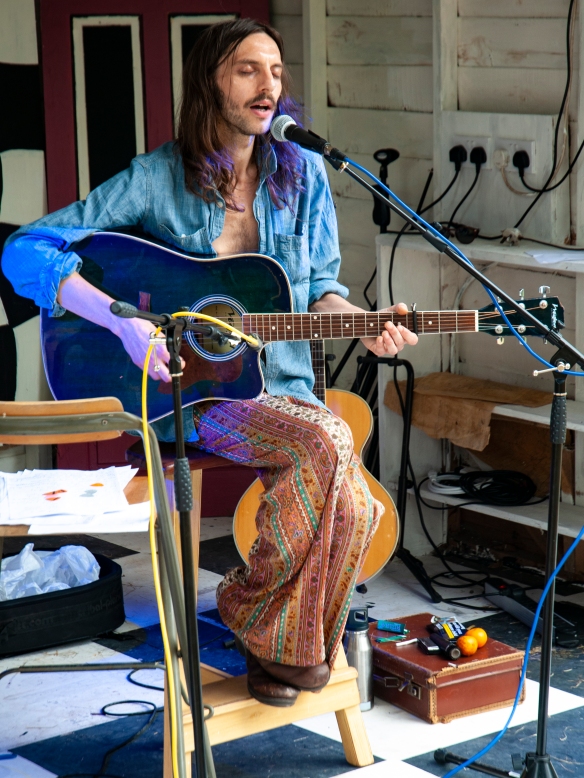 The Green Ray were next on the main stage – this was the third time they had played here including the original SoL back in 2007. Once again there was a cameo appearance by Barry Melton who turned up just in time to play the last two songs with them! 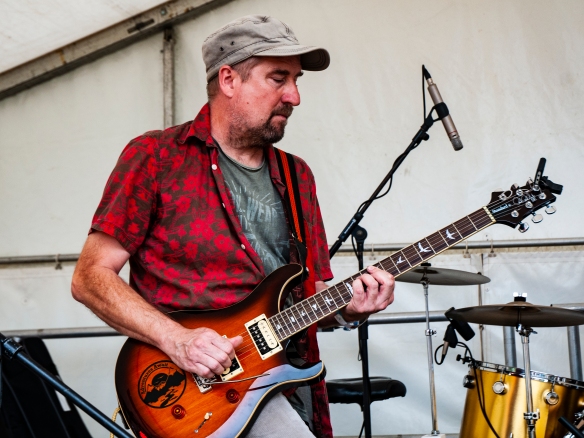 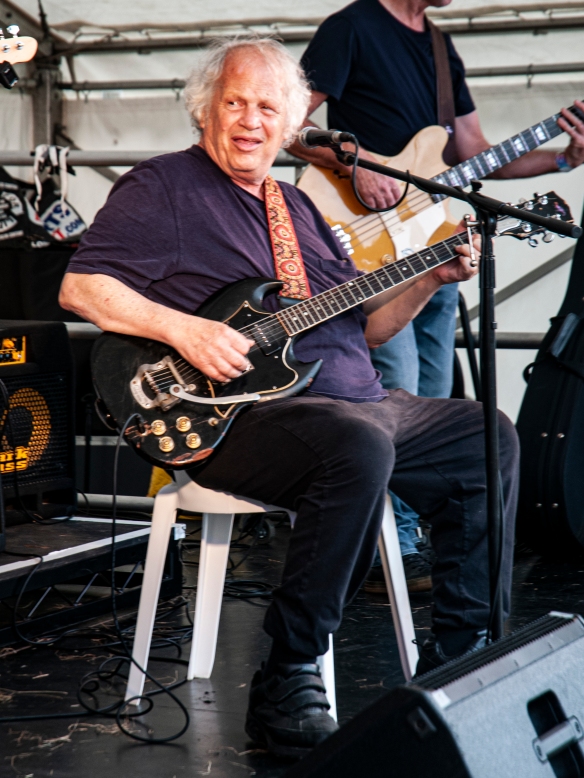 During the Green Ray set I spotted Keith from Here and Now standing in front of the sound tent so I went over and asked if he would mind doing something for me! Back in 1978 when I went to one of Here and Now’s free gigs I bought a copy of their first album Give and Take. I bought it from Steffi their original guitarist after the gig and he signed it for me. So I had popped it in the car to bring along with me to see if I could get Keith to sign it as he is the only original member still in the band! 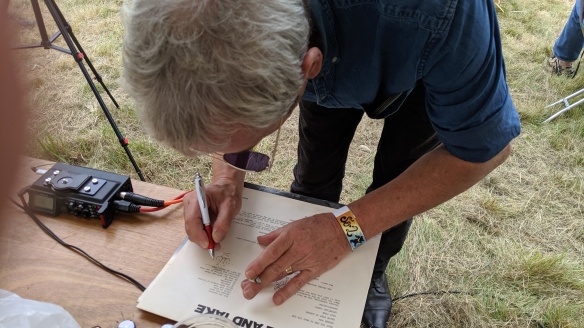 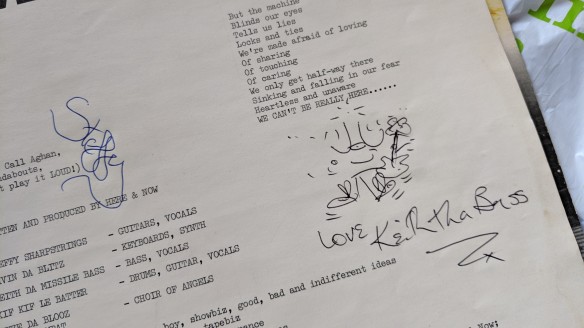 I took my recording rig up to the second stage to record Dubbel – I’m absolutely sure that I pressed record but when I got home and went to transfer it the disc was blank! At some point during their set I had decided to do something I’ve always wanted to do at SoL and although I have had a couple of half goes before I went for it today! Also during their set we discovered that someone had promised to lend Keith a bass amp but nobody knew who it was! I ran round asking despite being a little bit away with the fairies and in the end I gave up asking people and found the bassist from another band and asked if we could borrow his! 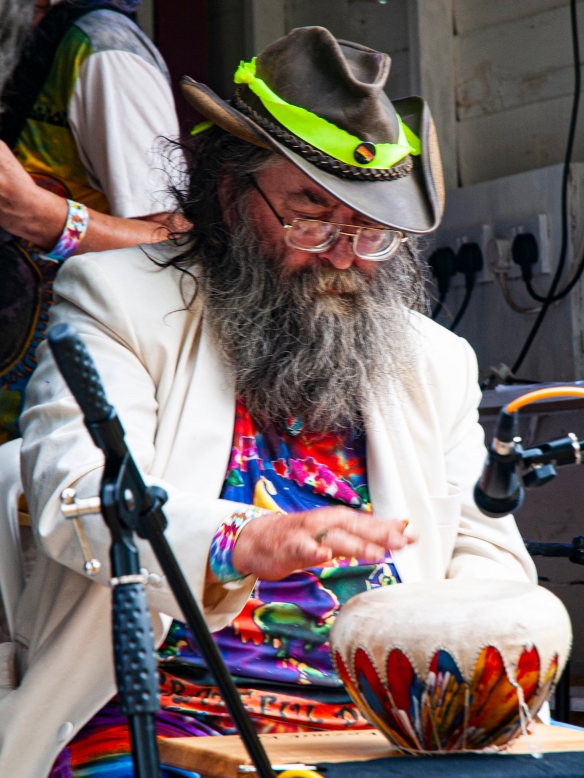 It turned out to have been the bassist from Dubbel who had promised his amp but given that they didn’t finish till about ten minutes before Here & Now were due to start that was never going to be a goer! He seemed quite pleased when I told him we didn’t need it anymore as it was huge and getting it down to the main stage would have been a task! 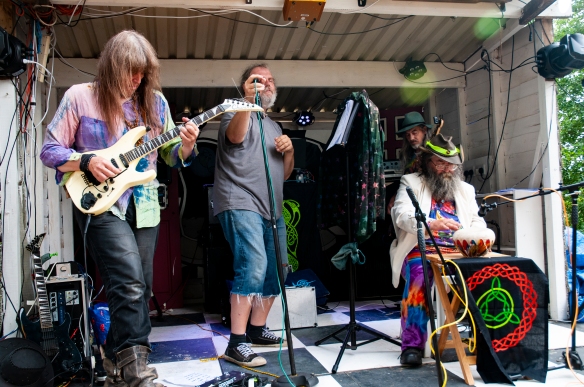 Here and Now were the band I was so much looking forward to seeing and with all the excitement beforehand it really all kicked in just as they started to play which made for a great way to watch them! They played some of their classic songs What you see is what you are, Surgeons knife and to my delight Opium for the People including a verse in French! I had only been thinking a few weeks previously about how I was sure there was a French version but couldn’t find where it was (it’s on the History and the Mystery of the Planet Gong!) and here were the band proving I hadn’t just imagined it! 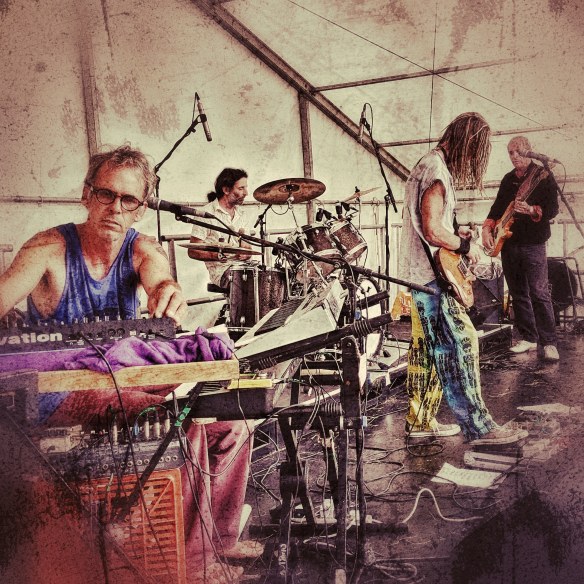 Some people were throwing a ball for a small dog during the set which had me worried because it was running around so much I thought it might end up having a problem – overheating, being exhausted or worse. At one point the ball ended up on the stage and the dog got all confused. After it had calmed down a bit I went to retrieve the ball and someone came over and demanded to know if I had thrown it onto the stage in the first instance – I gave him my organisers “what the fuck has it got to do with you anyway” look! 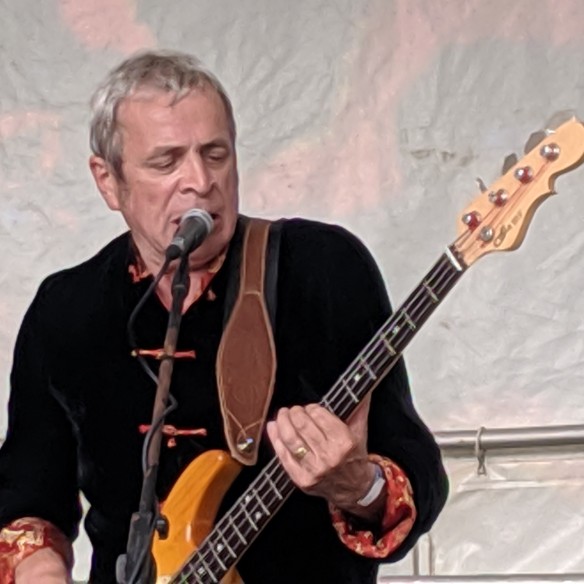 After the band finished there was the colossal task of setting up for the Headliners the Grateful Dudes so while that was all happening I set off to watch and record Colossal Squid on the second stage. This was a drummer called Adam Betts who uses samples and sequencers to create a great sound! This time the recording did actually come out! Odd given the state I was now in! I also had a weird experience in a portaloo during the soundcheck which is another story all together! 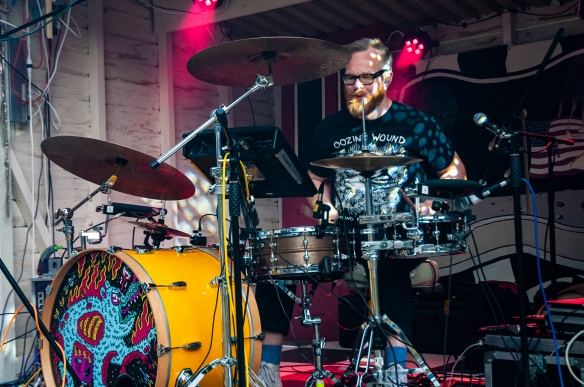 The first Grateful Dudes set is a bit of a blur if I’m honest! Time seemed to be running at different rates depending on where I was standing (It only worked properly if I was in the sound tent for some reason!) It didn’t matter though because I was as happy as Larry and having a wail of a time. One memory was when someone came right up to me and sang “Steal your face right off your head” during He’s Gone which summed the evening up really! 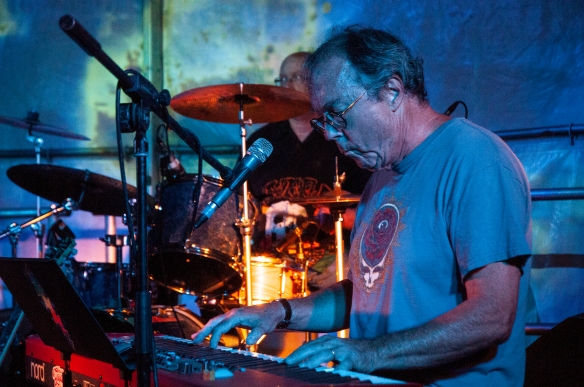 I took some pictures of the Grateful Dudes which came out remarkably well given the fact I could not focus on the screen on either my camera or my phone!  By the time they came back on for their second set I was starting to return to normal so I remember more about that than the first! 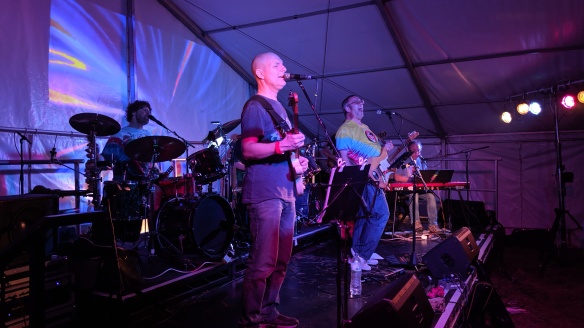 So that was it another SoL over and done with – I don’t think it was as good as last years but it came damn close! 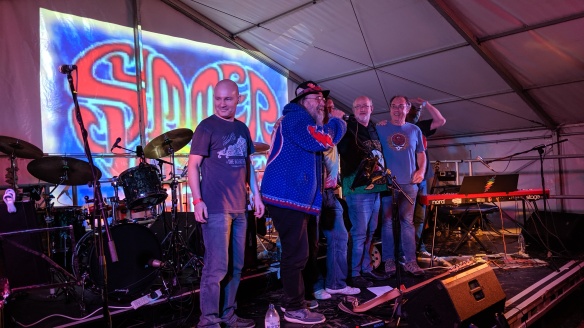 After we’d switched evrything off and packed up everything we needed to Jay and I headed up to the bar but that had long ran out of beer so we ended up drinking cans of Guinness around the campfire. We ended up talking to Keith and Mark from Here and Now and obviously the conversation turned to Gong! Keith was in Gong the first time I saw them at the Fridge in Brixton and I also mentioned that I had seen Kangaroo Moon (Mark’s other band) at Glastonbury once. He asked me what year it was but I couldn’t remember – it turned out to be 1992 and I wrote on my web review “When we arrived we thought it was Gong on the stage as we could hear a Gilli Smyth sound alike singing” – I also found out after SoL that it had actually been Gilli Smyth singing! 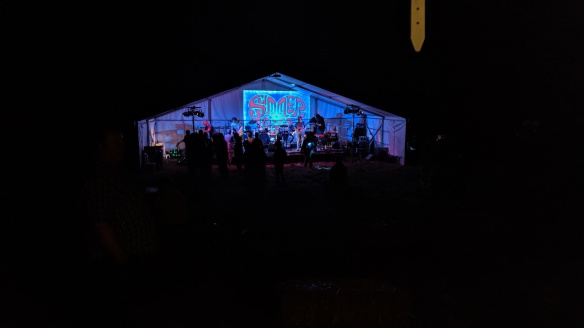 When I went to bed at 2am my mind was spinning – I couldn’t stop thinking about how much stuff I had to pack up and I really wanted to be away by about 10:30 so I would be back home at a decent hour and right now it didn’t look even feasible never mind possible! It also didn’t help that every time I started to drift off my bladder woke me back up again and I lost count how many times I went out to go to the loo! Eventually about quarter to four I must have drifted off but I was awake again at 6:30 which was fine by me because I got up and started the process of tidying and putting stuff away! 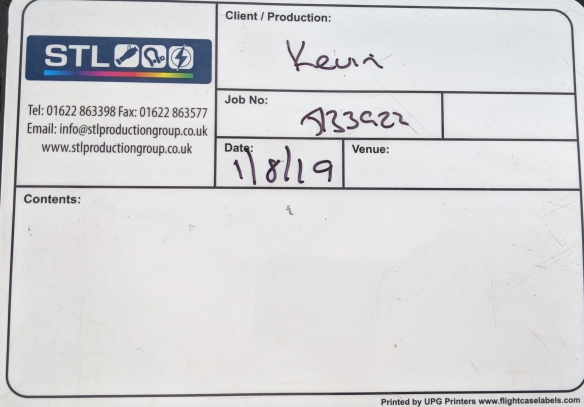 I did quite well sorting out the car and then getting all the cables that I’d brought into the correct boxes. I had a tick sheet for the stuff I’d brought from work and also for the cables that the genny people had provided and as I put the cables in the boxes I checked them off so I knew I had them all. By about 8am I felt that I could put the generator on and make myself a coffee. I needed it by then! At that point other people started to appear and I ended up going up to get some breakfast which was also needed. I was still feeling quite tired so some bacon, sausage and eggs really hit the spot! I did decline the joint I was offered though! 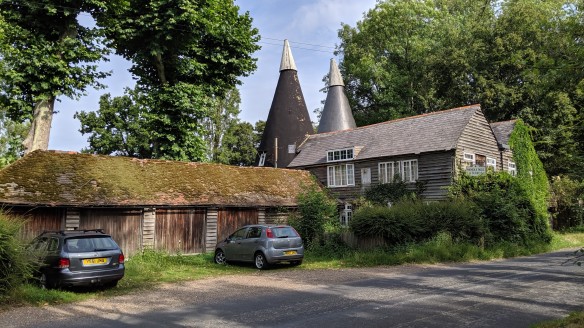 I was all packed up and ready to go by about half nine and so I sorted out making sure that everyone got paid by Tim and that everyone was ok before I set off to drive back home. I was actually glad when I got onto the M25 as it seemed like hard work driving along all the country roads around the venue! Once I was on the motorway I felt better and the more I drove the easier I found it! I got caught in traffic at the tunnel but that was to be expected and I stopped at Peterborough services because I needed the loo and again when I needed fuel. A full tank had got me all the way from Bishop Auckland down to Hawkhurst and back almost as far as Ferrybridge before I filled up – it wasn’t down to the warning light either so I probably could have made it as far as Weatherby but I knew the fuel would be expensive there!

I got back about 4:30 but thankfully Sarah’s idea of going to Taekwondo had gone out of the window during the journey so I unpacked everything and put stuff up in the attic (literally just in the attic, I’ll need to go up and put stuff away at some point!) I had a shower and something to eat and that was about it for me! Funnily enough I didn’t nod off much on the sofa which I was expecting to do!