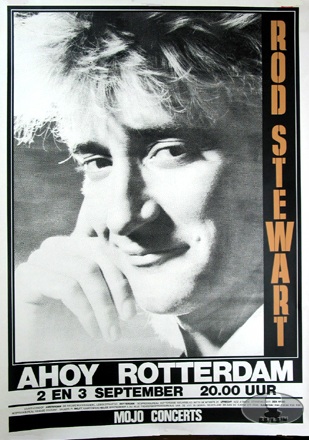 In 1986 I did a series of events for BNFL putting video monitors onto their exhibition stands – I worked on exhibitions in Geneva, Rotterdam, Cannes and Washington DC. It was while I was at the Rotterdam exhibition at the Ahoy centre that I discovered that Rod Stewart would be playing in the hall next to the one I was working in while I was there. Whilst I’ve never been a huge Rod fan it seemed rude not to go when it was so close so one lunchtime I popped along to the box office to see if there were any tickets left!  Thankfully the lady behind the counter spoke English and she asked me if I wanted standing or seated, for some reason I thought standing tickets would be at the edges so I went for seating, this was my first big mistake!

Now this being the Netherlands I had taken advantage of their relaxed laws involving certain substances which had lead me to quite a scary episode in the seedier part of town with a dodgy bloke earlier in the week but that as they say is another story! I’d also had a little jaunt into Amsterdam on a day when I didn’t have anything to do so before I went into the venue I decided to have a little smoke in the back of the van! This was my second big mistake!

On entering the venue I discovered that the Ahoy stadium was a cycling track and as such the sides were very very steep. My seat was quite high up in the arena and in my state I was absolutely shit scared of the hight and what felt like a sheer drop! I don’t think I let go of the arms of my seat until about four songs into Rod’s set! To make matter worse I discovered that the whole area in front of the stage wasn’t seated as it would have been in a similar venue in the UK at the time but was actually the standing area I’d been offered tickets for!

The show was like I expected it to be, full of his greatest hits which turned into massive sing-a-longs. Obviously the show finished with Sailing and at one point I remember him kicking footballs out into the audience, oh well at least I can say that I have seen him! There is an audio recording of the night out the but it doesn’t appear to be on YouTube but I did find this clip of three songs from Wembley from the same tour.

She Won’t Dance With Me
Hot Legs
Tonight I’m Yours (Don’t Hurt Me)
Some Guys Have All The Luck
Passion
Tonight’s The Night (Gonna Be Alright)
I Don’t Want To Talk About It
Green Onions
Love Touch
Young Turks
Infatuation
(Sittin’ On) The Dock Of The Bay
Maggie May
Every Beat Of My Heart
Da Ya Think I’m Sexy?
Baby Jane
Sailing