In my mad year in 2003 just after I spilt up with my first wife and got together which my current wife I went to lots of gigs, it was a sort of freedom thing I suppose. Out of all of the gigs I went to this was the most expensive one. It’s sad to think that back then £35 for a concert ticket was considered expensive because now it would seem like a bargain!

I’d seen Neil Young before – at Wembley in 1987 and at Phoenix Festival in 1996 but both of those shows were with Crazy Horse and as much as I like electric Neil Young I’ve always preferred acoustic Neil Young so when I found out this was a solo tour I jumped at the chance. I’m not sure looking back if I knew it was going to mostly feature his new and as yet unheard album Greendale before or after I bought the tickets. 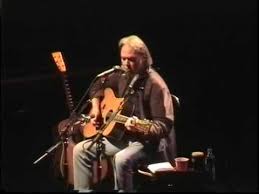 I had bought the cheapest ticket available and this meant that my seat was in the very back row of the balcony. I’d taken my taping gear along but was very nervous when I went in because there were no taping/no photography signs everywhere. I still managed to get it in without any issues though! The next problem I had was that sitting in the back row I felt quite exposed with security walking up and down so the recorder stayed firmly in my pocket for the whole night. I guessed when I needed to change the disc – between Grandpa’s Interview and Bringin’ Down Dinner. I pressed stop and ejected the disc and then put the new disc in and set if off recording again. It wasn’t until later that I realised that I had been 2 seconds from running out of space on the disc and thankfully the second disc recorded ok. 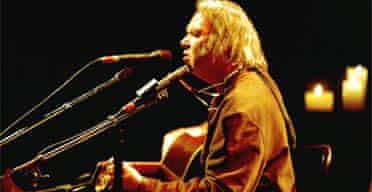 Neil sat on the stage surrounded by guitars and there were a couple of  pianos and a pump organ behind him. He spent most of the first set playing guitar and harmonica but during the second set he moved around more. I really enjoyed the Greendale set even though I had never heard the tracks before. Neil talked about every single one of the songs and filled in the story as he went along. I don’t think I’ve ever heard a star of his stature talk so much during a show – it was like him coming round to your living room and playing his new album!

There was some dick in the audience who kept clapping during the Greendale songs but we couldn’t figure out if he was trying to clap along but was out of time or if he was trying to start a slow hand clap – if he was no one was biting! At one point during the show someone shouted out “at least you turned up this time” a reference to a previous gig at the Brixton Academy which was cancelled at the last minute (my brother had travelled down from Manchester and only found out when he got to Brixton tube station). When it was shouted there was such and intake of breath from the crowd it was a wonder Neil didn’t get sucked off the stage! he took it in good humour though and told us how when he checked into his hotel this time they had put him in the same room where he got ill last time!

In the second set he played a number of his older songs – he changed this part of the set each night. My particular favourite was After the Goldrush which he played on the pump organ changing the words to “Look at Mother Nature on the run in the twenty first century”. the final encore was heat of Gold which got the biggest cheer of the night!

Set 1 – Greendale’ album in its entirety