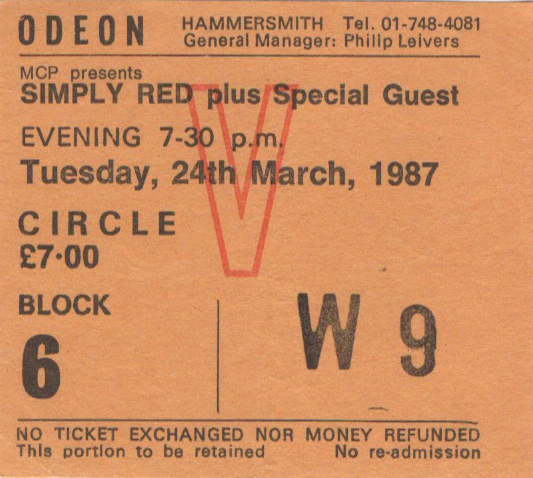 I remember the reason we went to this gig was that my friend at work was selling some tickets he had but was unable to use. I did like their first album but to be honest it’s really not my thing! I remember it was a decent show and I was impressed with the power of Hucknall’s voice – at one point he was holding the microphone at waist level and was still coming over loud and clear!

I’m told that Terence Trent D’Arby was the support act but I don’t remember – it’s possible that with the logistics of getting from Thamesmead to Hammersmith we missed him or maybe he hadn’t become that well known yet!

The only other time I saw Mick Hucknall was when I was flying back from Barcelona after a meeting there. There was an air traffic control strike in France so I had been diverted by Milan flying from Barcelona to Milan and then getting a flight back to London. Hucknall was on the Milan flight (I think he lived there at the time) – he’d been in Barcelona to watch his football team Manchester United play but they got beat 4-0 so I didn’t attempt to talk to him!