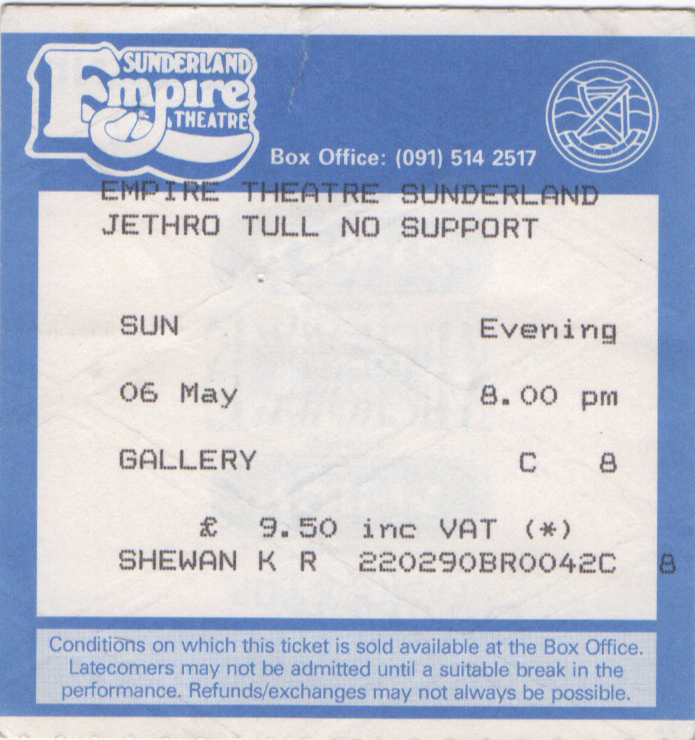 If I was being totally honest (and I am) I would say that this was one of the worst gigs I ever went to! This was mostly to do with the venue and the sound!

We were quite excited about going to see Jethro Tull in our hometown of Sunderland. The gig was not long after two massive life changing events – firstly my mum had died the previous month and then we discovered that we were expecting our first child. We were also looking forward to coming up to see my Dad for the first time since the funeral!

In case you’ve never been the Sunderland Empire is an old fashioned theatre – very tall with a dress circle, upper circle and gallery and it was in the gallery that we had got tickets. It was the first night of a “not so much back to basics but back to Sunderland’ tour. The sound guys had put a PA stack either side of the stage and that was it! When the band came on there was nothing but a horrid noise up where we were sitting – bass, bass and pretty much nothing else!

At the end of the first song there were lots of shouted complaints from the audience which Ian Anderson mostly ignored – I shouted out “we can’t hear anything up here” to which he replied with some comment about it being the first night of the tour and the sound man hadn’t got it quite right yet” I shouted back “oh so you can hear me then!”

The band continued and the sound was just as bad for the whole gig – the only time it was listenable was during the acoustic sections but as soon as there was any electric guitar it was gone again! Truly appalling  – it’s a wonder I didn’t complain and ask for a refund!

There is a video of the gig – you can hear me shout after the first song!

This was the first gig my eldest daughter went to – 7 months before she was born!