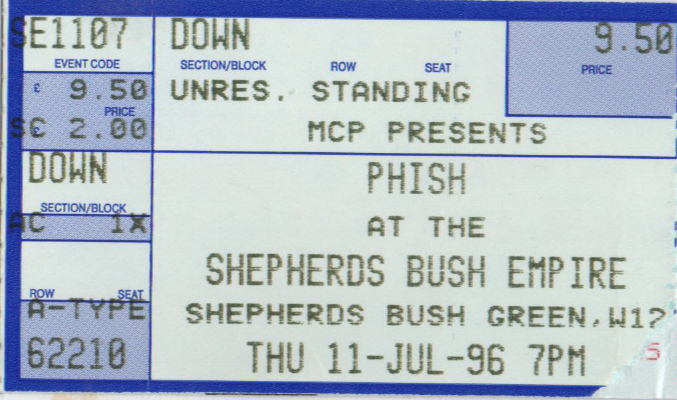 I’d first got into Phish after the death of Jerry Garcia a year earlier. Their name kept coming up in online forums so I decided to check them out. I ended up in of all places Columbus Ohio for work at some point in October 95 and during a break I wandered into a record shop in the Mall next door. I decided to buy a Phish album but which one – because of the Grateful dead connection I bought A Live One figuring that they would probably be at their best live. I listened to it on the flight back to the UK.

One night I was sitting watching TV and looking through an edition of Q magazine when I suddenly became very excited! I’d spotted an advert for a Phish gig at Shepherds Bush Empire in the live section at the back! I practically jumped out of my seat and grabbed the telephone (my poor wife didn’t have a clue what was going on) – I rang a 24hr ticket line and bought a ticket there and then! I didn’t find out until the day of the gig but Phish were touring Europe as support act for Santana but for some reason Santana didn’t have any shows in the UK. Phish had obviously decided that to cover a gap in the schedule they would play at gig in London and another at the Melkweg in Amsterdam (I wish I’d known that at the time, I might have gone to that one as well – in fact I did consider it but if I recall correctly I was on a show the following day otherwise I might have been on a plane!)

When I arrived at the Empire on the night of the gig it was mad. There were lots of people outside with their fingers in the air looking for tickets just like I’d heard about from American Dead shows. I’d never seen anything like it and I was expecting it to be the same when Phish played there again the following year but it wasn’t! It really added to the atmosphere and made me even more excited about finally seeing the band.

I was down the front of the stalls slightly to the right so had a great view. Paige was on the far side, Fishman’s drum kit quite close to me and Trey and Mike were between the  two. The first set started off with Runaway Jim, Cavern and then Reba (minus the whistling which didn’t reappear until about 6 months later in Amsterdam. If I remember correctly I dashed to the loo after Reba and when I came out Fishman was playing the vacuum cleaner! 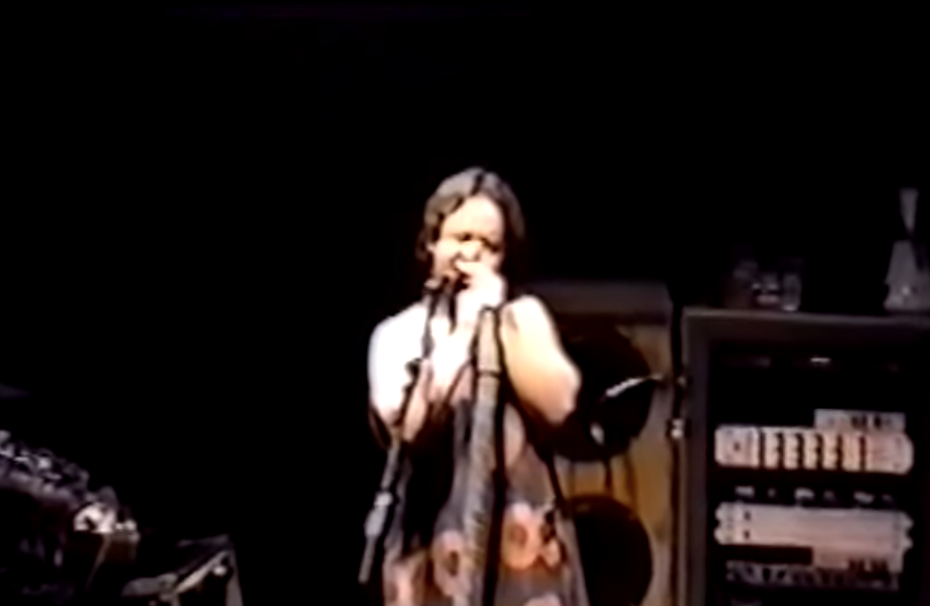 When I bought the A Live One Cd I remember saying to my colleague “oh look the drummer is wearing a dress, they seem like my sort of band!” and sure enough he was wearing it again tonight (although I think this was the only time I saw him wearing it or playing the vacuum come to think of it!) The rest of the set was brought to us by the letter s – Sparkle, Stash (I got to do the handclaps that I’d loved on that flight back to the UK the previous year) and Scent of a Mule to finish off.

If I thought the first set was great I was about to be blown away by the second! It started with Harry Hood then Bouncing around the Room before they pulled out a great version of Also Sprach Zarathustra which took us into Maze. As if that wasn’t good enough Trey then pulled out one of the tracks from their unreleased Gamehenge album the Lizards. At that time I didn’t know what it was but I loved the song about an Knight and his quest for the Helping Friendly Book.

As Lizards faded away Trey moved over to the drums and made way for Fishman to come to the microphone. they played a Syd Barrett song Terrapins during which he once again played the vacuum cleaner. At the end of the song Trey said “Only Syd Barrett could get Fishman to play the vacuum cleaner twice in one gig, he’s up there on the second balcony, thanks for coming down!” 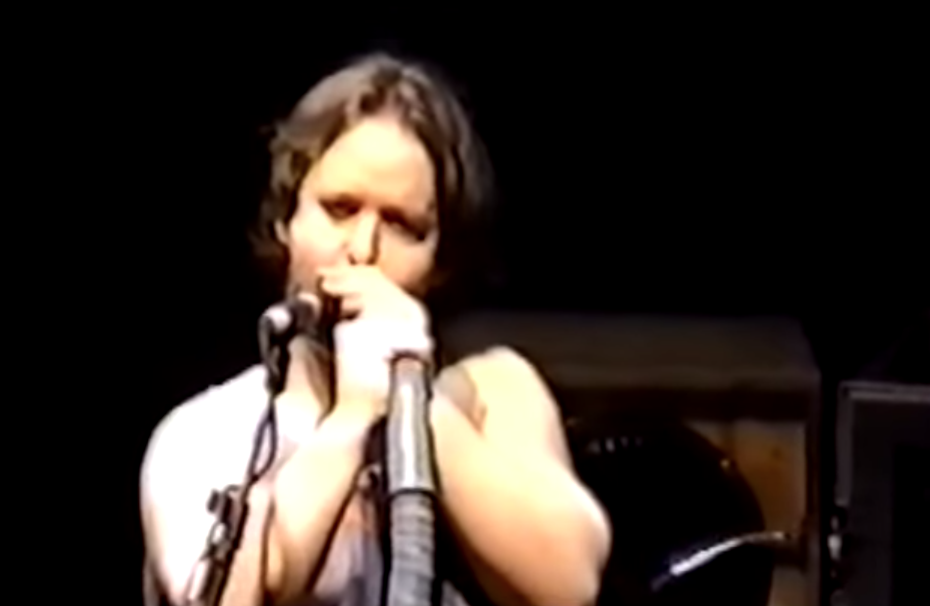 The band then launched into You Enjoy Myself with Trey and Mike bouncing on trampettes for part of the song! the song slowed down and went into a massive scat section to finish before the four members of the group gathered at the front of the stage and sang Hello my Baby unaccompanied and unamplified to finish off the set. There was a great deal of shushing from the audience throughout as we all strained to hear! 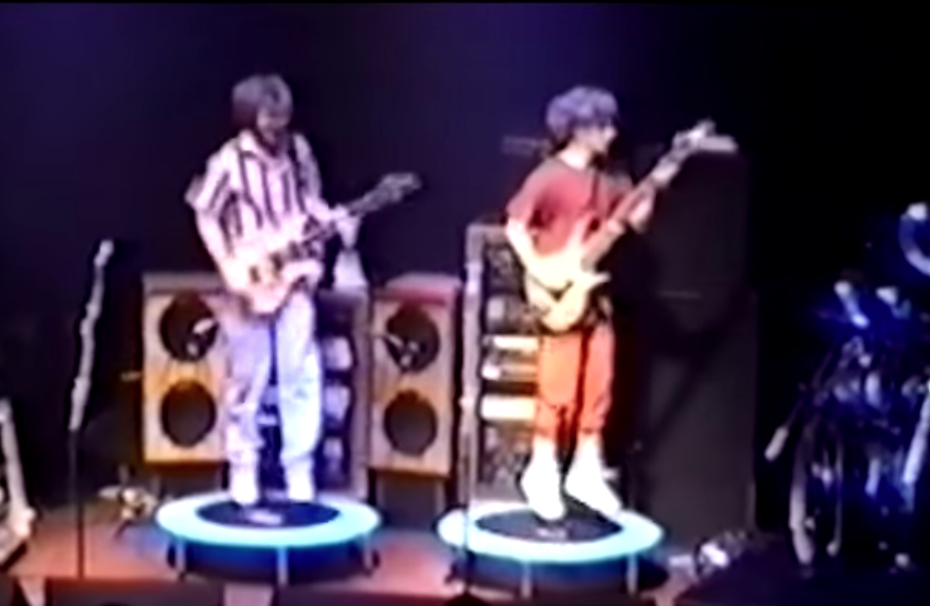 The band returned for an encore and presumably because they were in the UK chose a Beatles cover – A Day in the Life to end the show. I seem to recall that it was an absolutely stellar version with a great accompanying light show to end a fantastic night – we all staggered out into the Bush and I really did wish that I was going to the Dam to see them again the following night like a tour rat – oh well maybe next time 😉 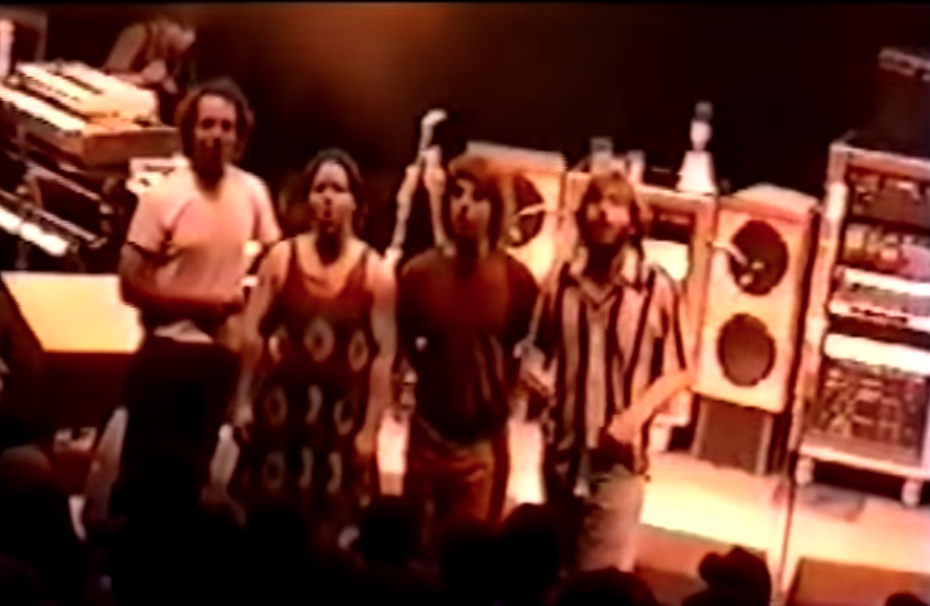 Encore:
A Day in the Life