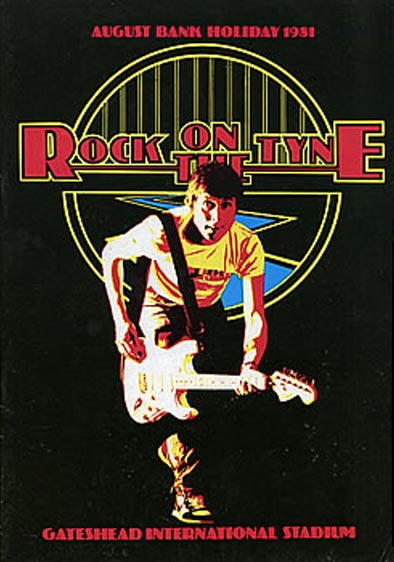 Rock on the Tyne was between my first and second years at University and in a summer when I was quite hard up due to having to pay rent on a property in Manchester over the summer that I wasn’t even living in. This may have been why we only went on the Saturday although there may have been other reasons such as the bill on the Sunday was comprised of people I had already seen or wasn’t bothered about seeing. However I suspect that the main reason I went was to see up and coming band U2. 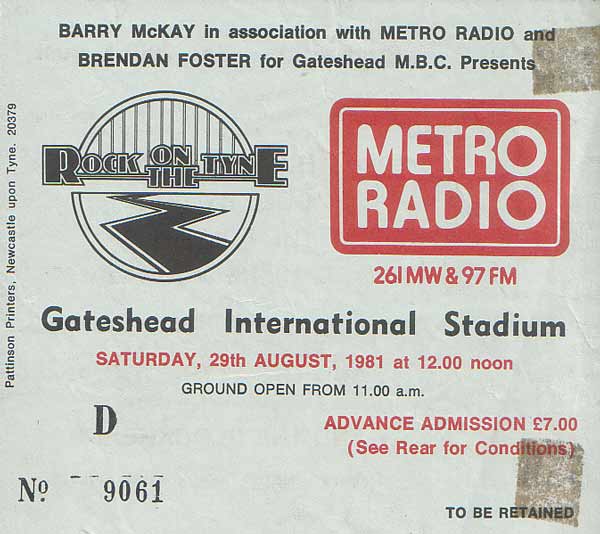 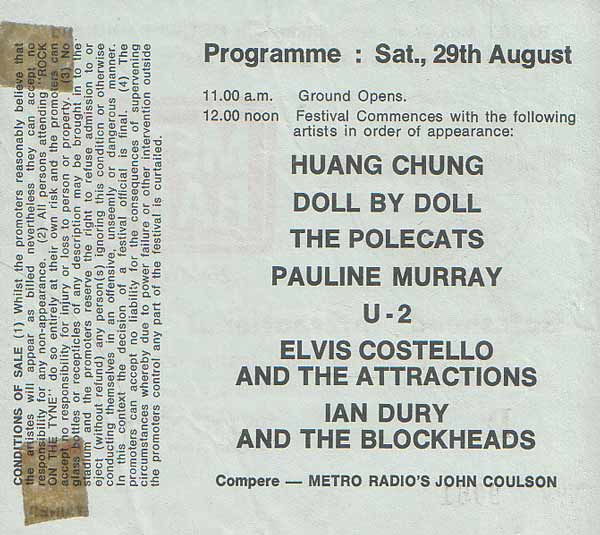 They had been due to play at Salford university in the final term of my first year but circumstances meant they pulled out a week for the event. I had just become involved with the ENTS people and we were gutted to find that we went from “U2 plus the Radio 1 Roadshow” to “Radio 1 Roadshow plus……” lots of names were thrown at us as replacements but we ended up with a band that was also on that Saturday The Polecats! 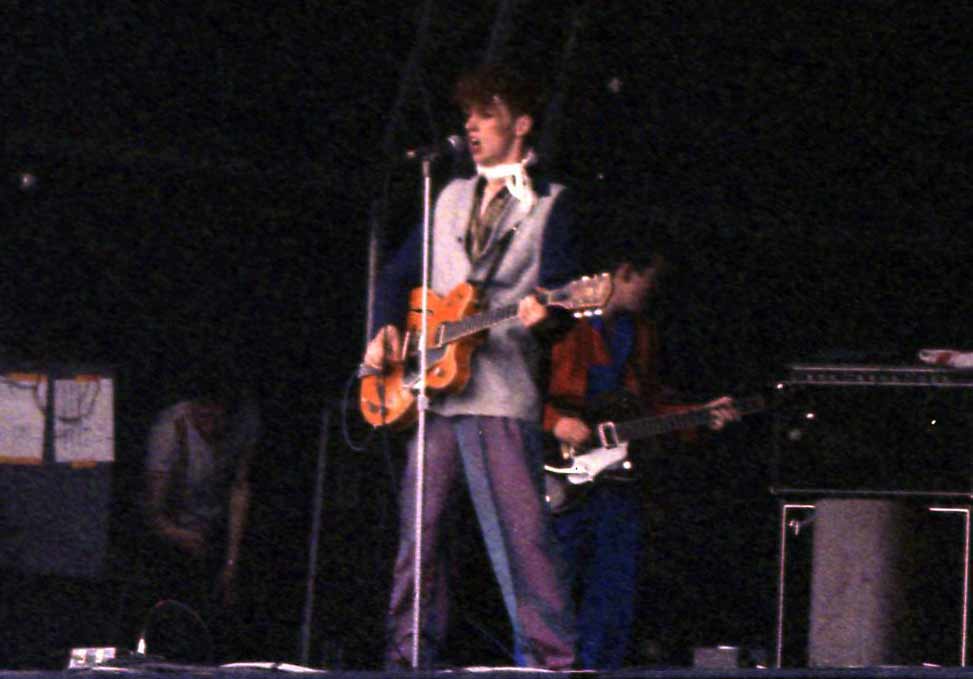 The stadium was on paper an ideal venue for a festival as it was quite close to a main road and public transport, however I found it quite soulless inside and the stage had been positioned opposite the main stand, which was a good idea for people who might want to sit and watch the bands but from the point of view of sound it was a nightmare. The sound bounced back from the stand and caused an awful echo – something I pointed out to the host as he stood on stage wearing a garishly coloured stripey jumper! 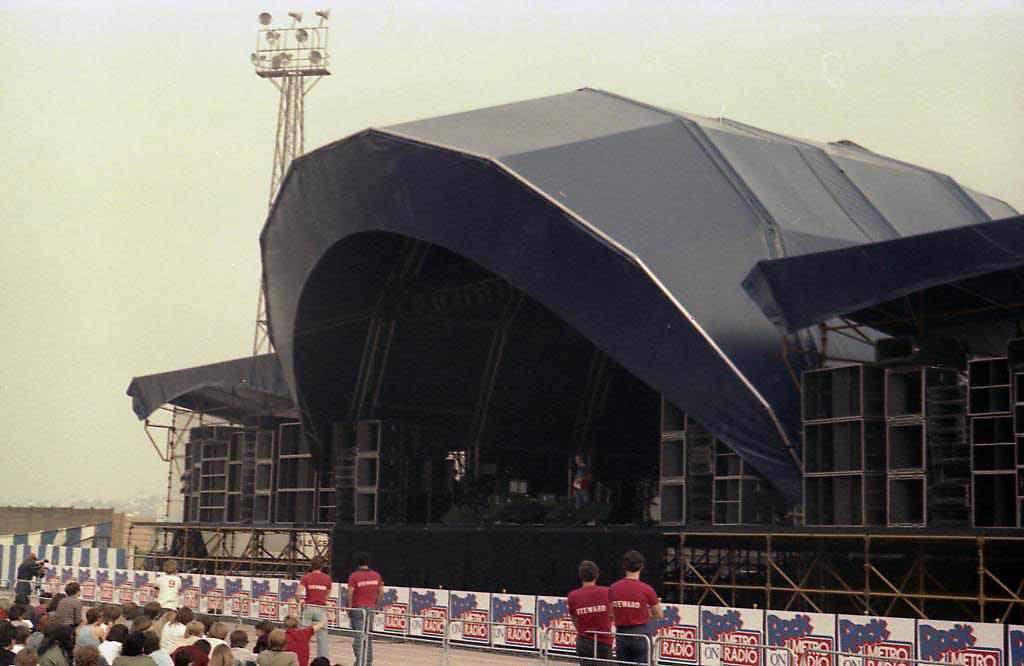 At one point we saw a couple of the band at the wall that surrounded the backstage area and went over to talk to them. We got the two that were there to sign the program and then convinced the drummer to take the program over to the remaining members of the band to get them to sign it too! In the background of the photo is Colin Rowell who was Stage manager at the City Hall In Newcastle who had obviously been drafted in to run this event as well. 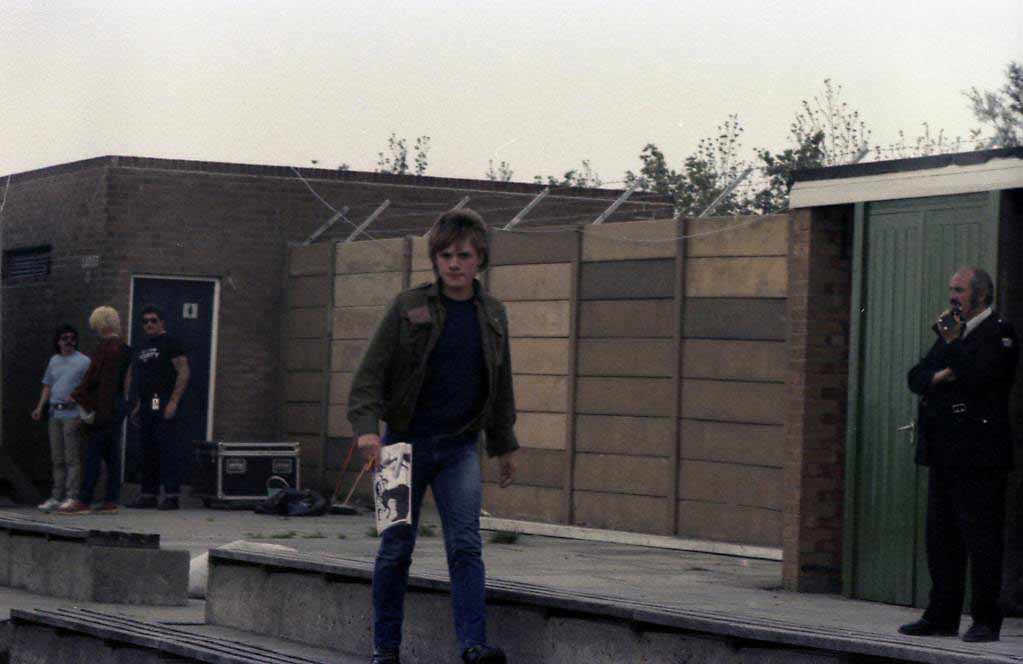 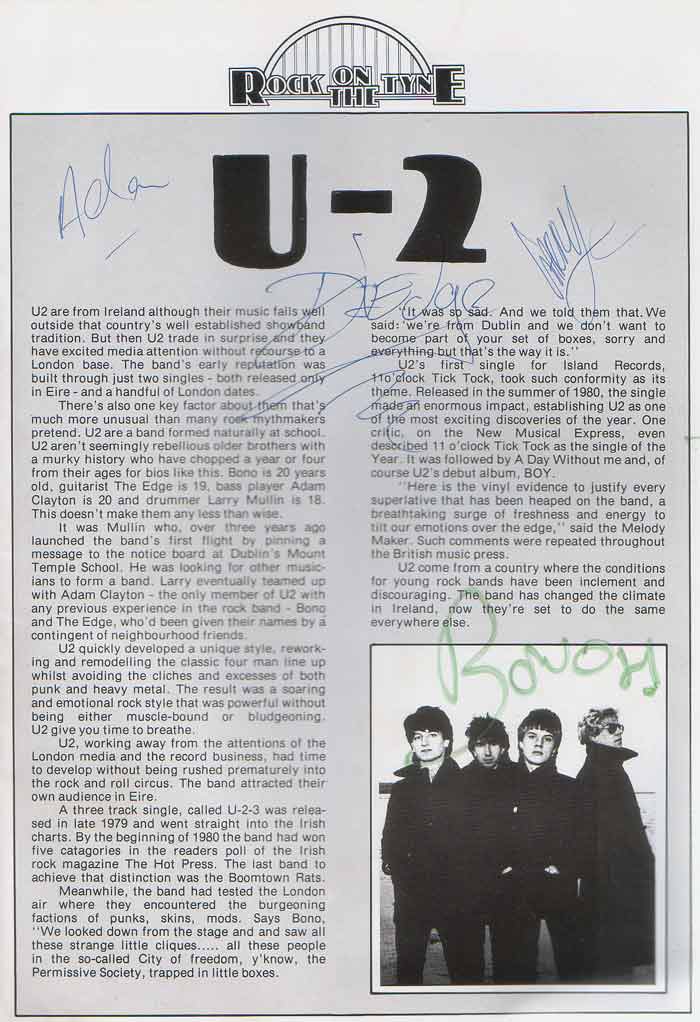 I don’t remember a lot about U2’s set to be honest, they were much better a few months later when they appeared at Salford to make up for pulling out the first time round but I did watch that from the organ pit at the front! All I remember was that during one of the songs Bono climbed up onto the PA stack. I think their appearance probably suffered from being during the day without a light show and being unknown to a lot of the crowd. 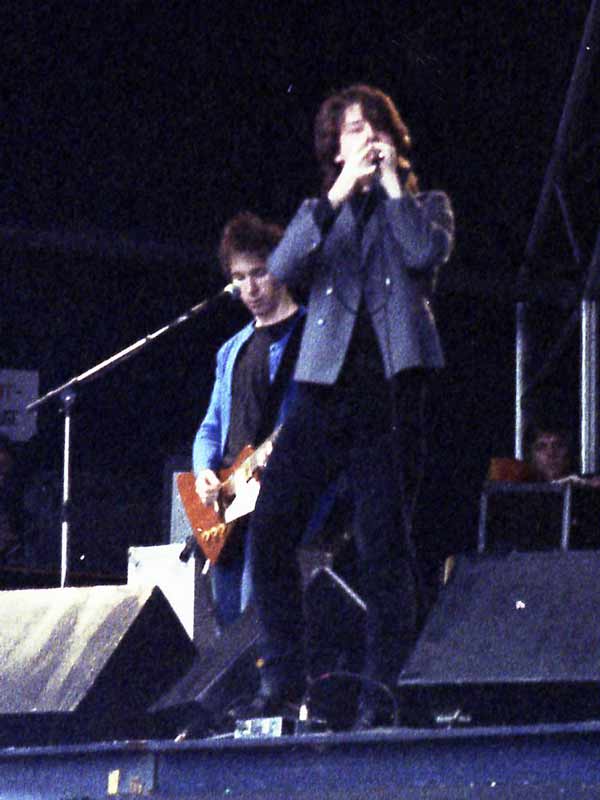 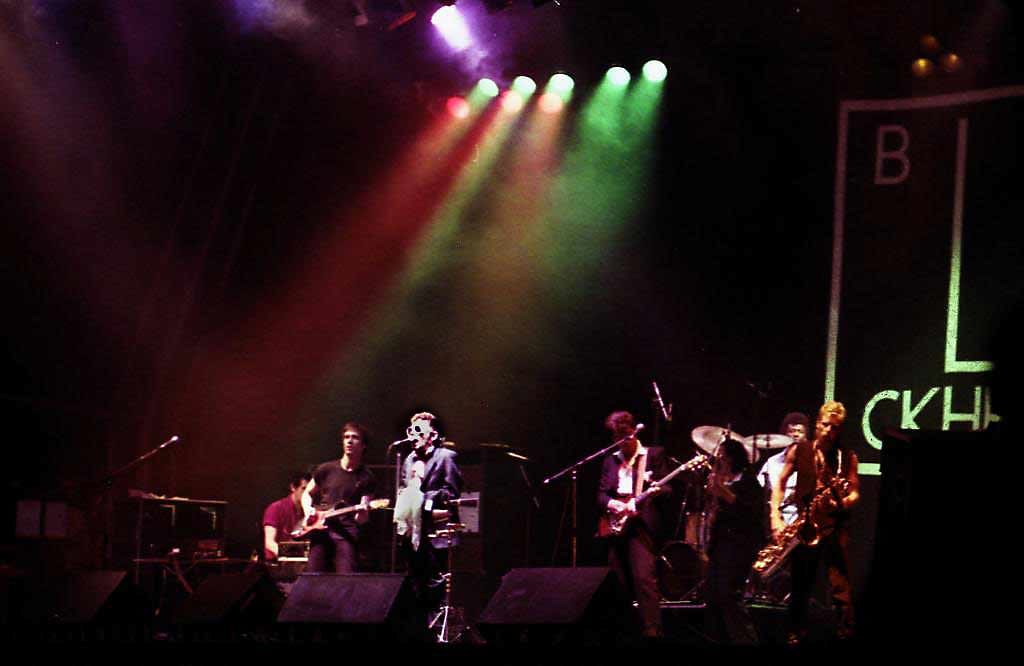 Ian Dury on the other hand was absolutely fantastic and the highlight of the day whereas Elvis Costello was really dull – he was going through a country phase and had re-jigged all the old songs he played to fit and there was a huge bit in the middle of the set of new stuff. We must have stayed till the end because I remember him playing What’s so funny about Peace, Love & Understanding but we’d wandered away from the front by this point, I’ve got a picture of him from the back of the crowd and everyone looks bored! 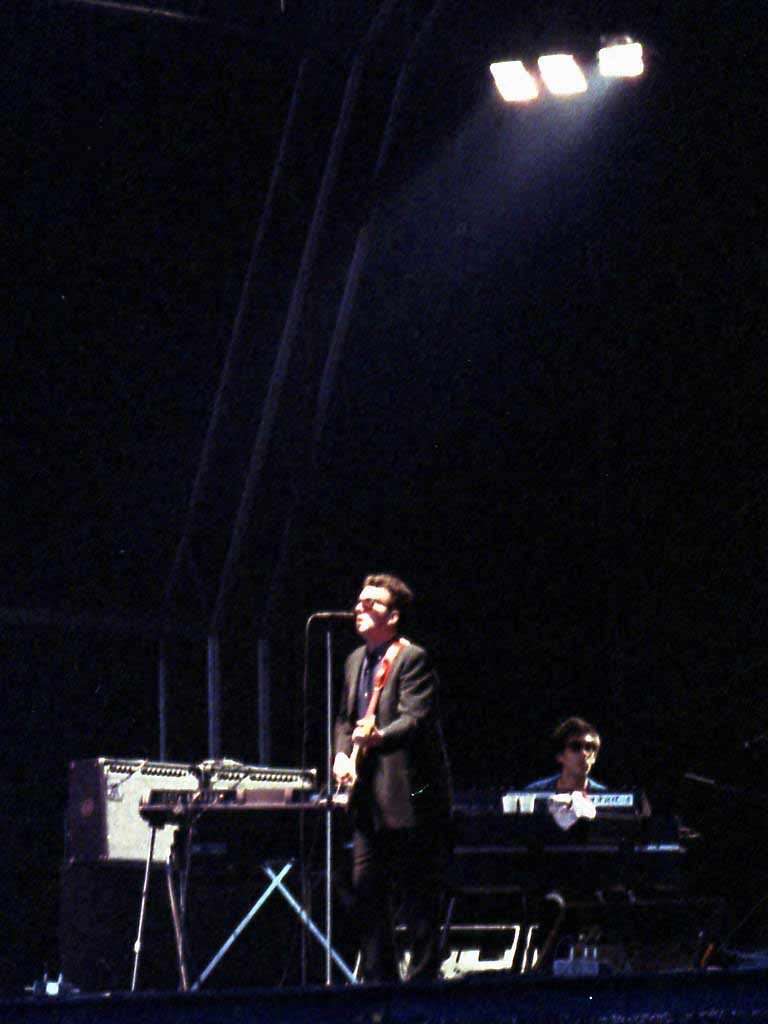 I think it finished quite early but I have no idea how we got home, maybe I’d driven or my friend had – who knows! 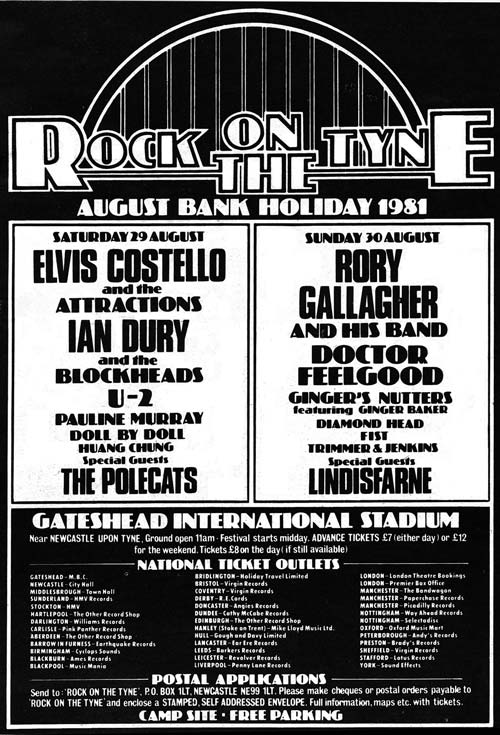 This was originally written for the UK Rock Festivals website