Sadly last week we had to let one of our cats leave this world. It was very sad because he had become such a part of our everyday life that he had left such a big hole. 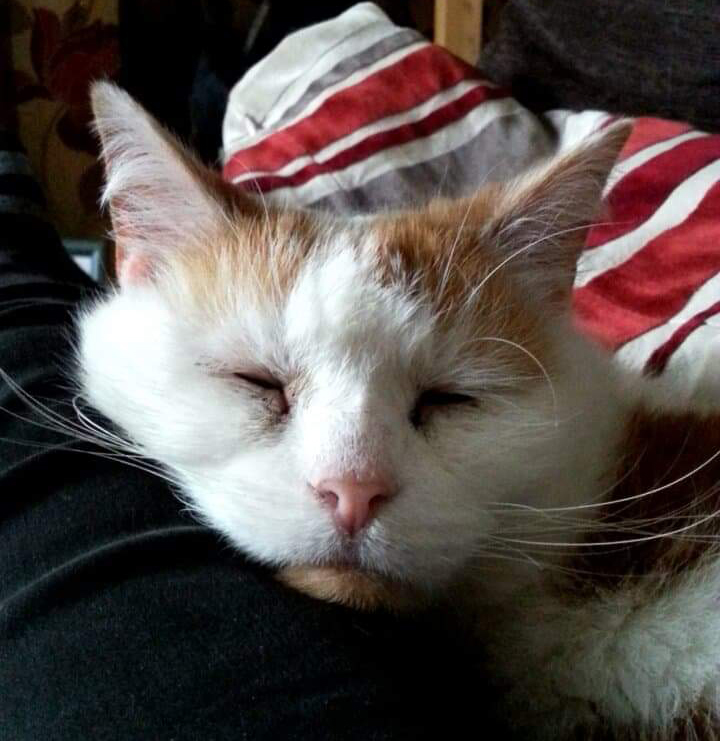 here is the description from his former owner! 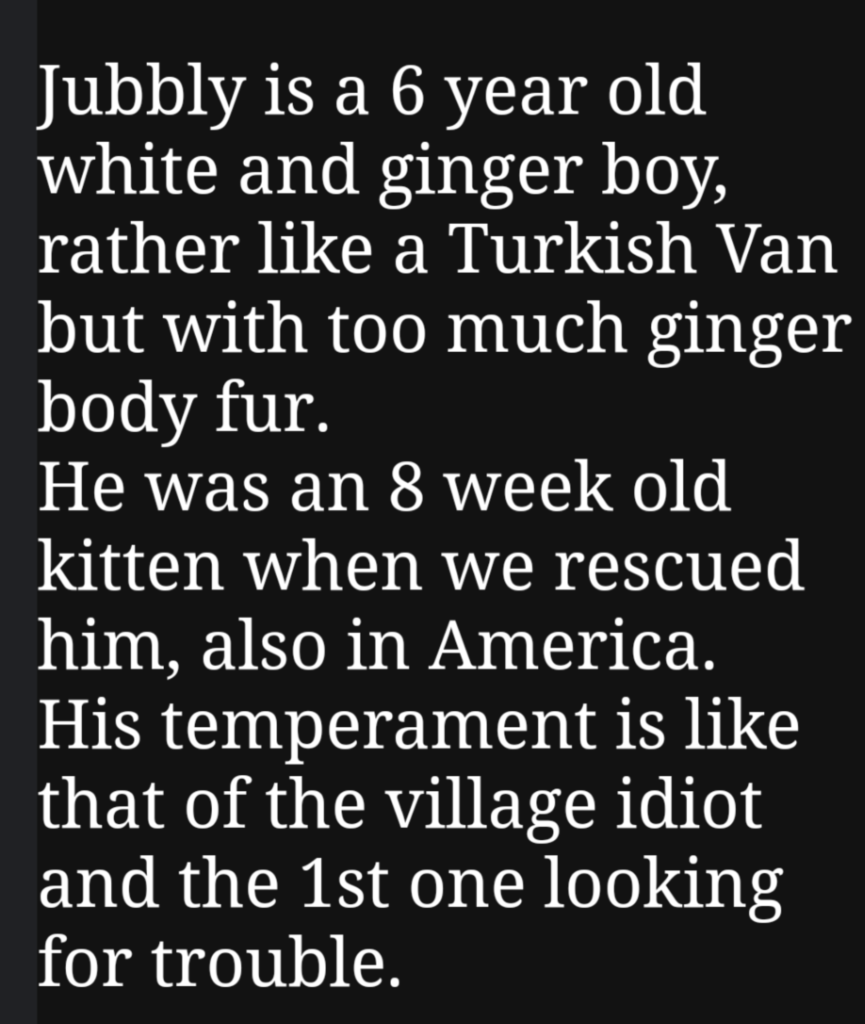 So the guy came round to see us and after chatting to us on a red hot day for about half an hour he suddenly revealed that he had Jubbly in the car so he went and got him. Poor cat was stuffed into a cat carrier that was way to small for him and had obviously been in there for some time in a red hot car.  As he emerged blinking into our dining room we all fell instantly in love with him especially when we saw his thumbs! 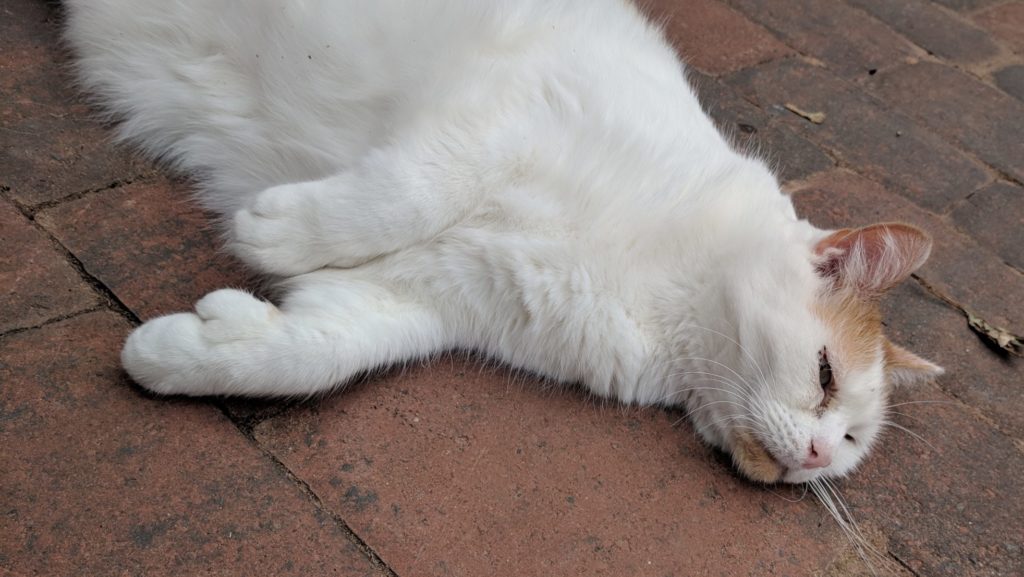 So he stayed (and later was joined by another of the cats that the bloke was trying to re-home Raj who sadly disappeared after we had moved up north. In the early days Jubbly certainly lived up to his reputation as a village idiot as he would often climb up onto the fence and then jump down into the alley only to find he couldn’t make it back again. Once he disappeared for a couple of days and we ended up out frantically searching for him only to hear a plaintiff me-ow from a back garden – we had to break into the garden through a gate that hadn’t been opened for years to rescue him. After a while he became a house cat and he couldn’t be trusted with the outside world unsupervised! 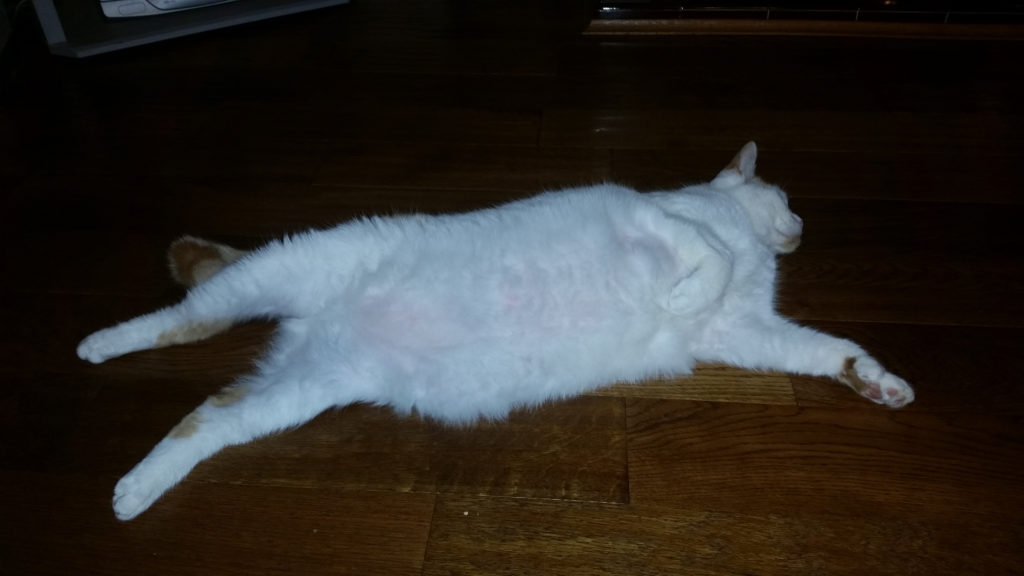 He was quite a chunky cat when we first got him but shortly before we moved up north he started to suffer from diarrhoea and to  lose weight to the point where we started to fear for his life. The vets had no idea why he was losing weight and their best suggestion was that we try him with different types of food. Eventually after much searching online we tried him with some cereal free food and that did the trick and thankfully he started to agin weight again but not before he famously poo’d all over the estate agent who was trying to sell our house! 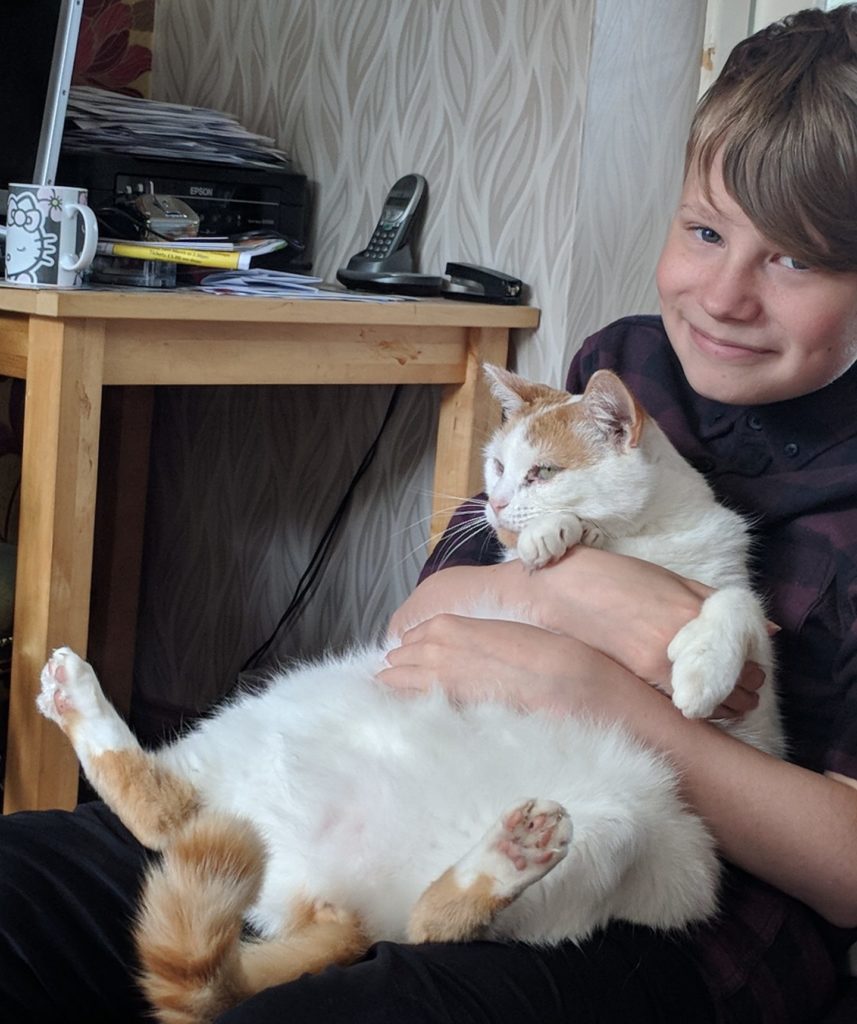 He was such  a tolerant cat, I don’t think he ever swiped at us in all the time we had him and he had to put up with a lot! Ben would just pick him up and carry him around, he would let you tickle his tummy and swoosh him around on the polished floor! He liked to travel upside down so if you were carrying him anywhere that’s they way he would go! The poor thing was always the first to have a silly Christmas hat or sunglasses placed on him – the only thing he didn’t like was jumpers and he would manage to escape from them pretty quick! 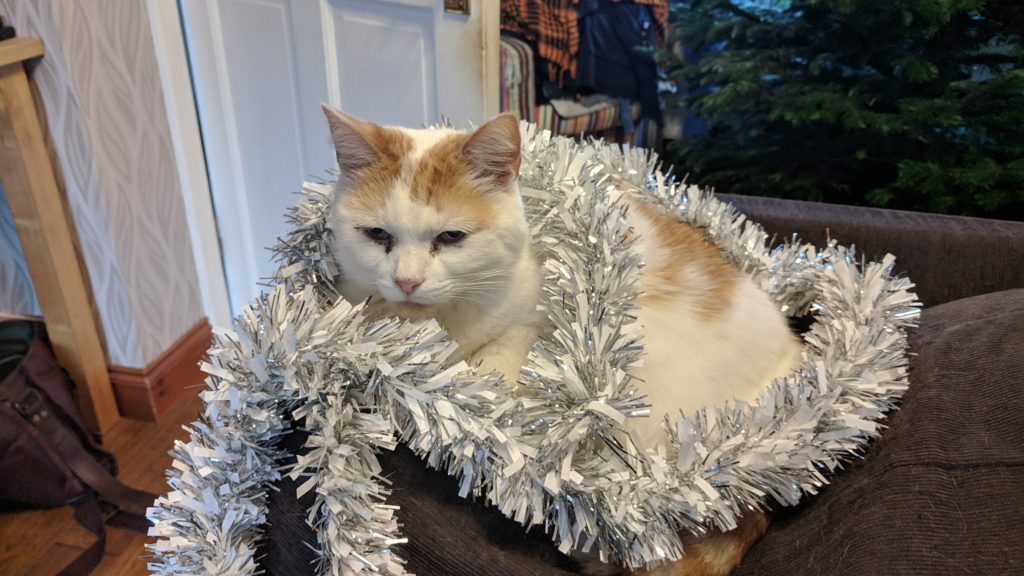 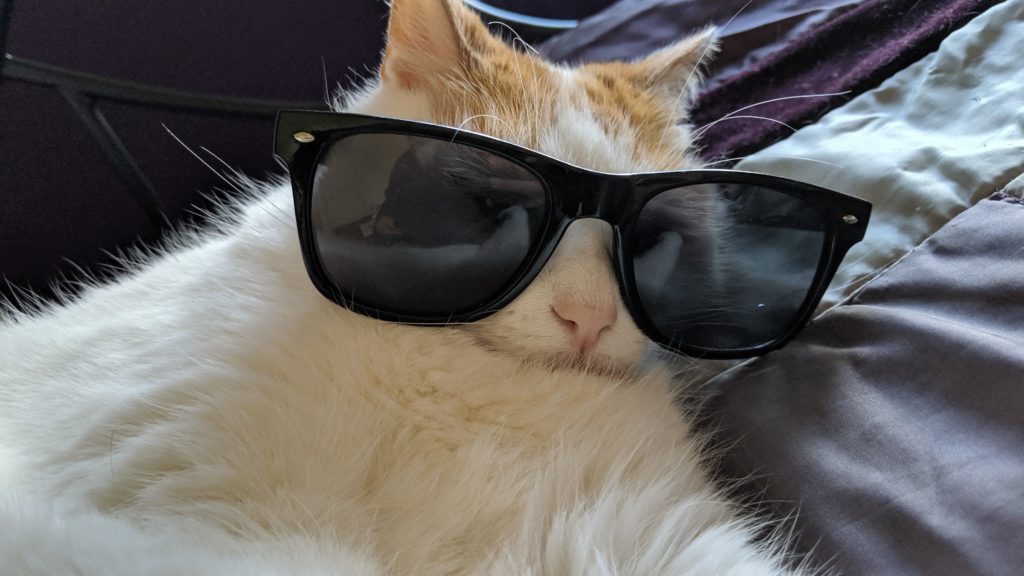 At the new house he remained an inside cat but on two occasions when other people were looking after him he managed to escape! The first time one of our neighbours saw us looking for him and he was found quite quickly. The second time we searched and searched until it was dark and couldn’t find him. The next morning we posted on social media and he was found quite quickly – apparently he had got round to the next estate and had sat in someone’s garden for 15 hours until they took him in for the night! He was literally about 300 yards away from home but didn’t seem to have the sense to find his way back. The girl who rescued him thought he was pregnant! 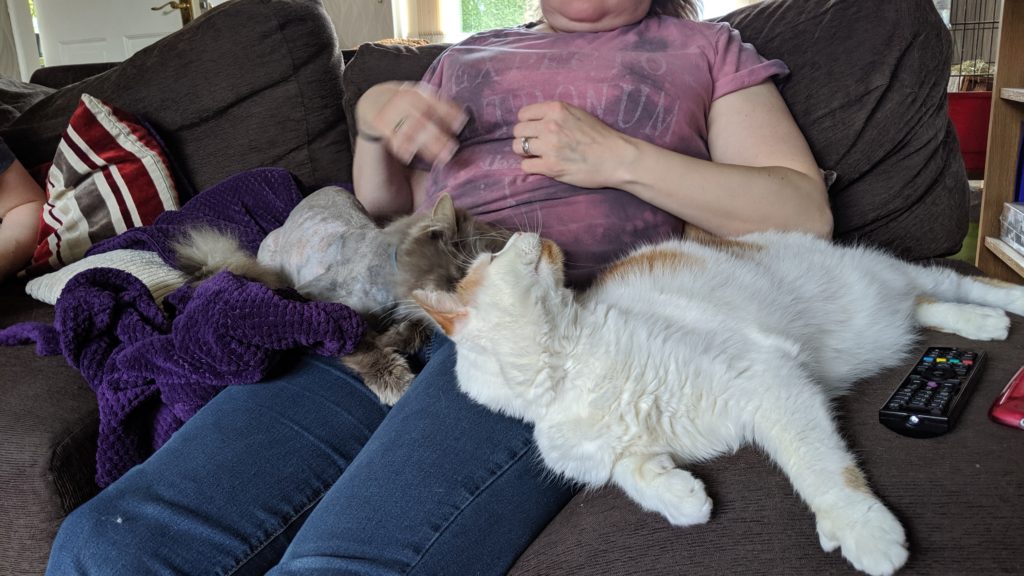 He had lots of strange foibles! He would come and sit next to Sarah on the sofa and then just roll himself into her. When he was being chased he would walk a few feet and then just flump himself down on the ground. He would poo next to the cat lit tray instead of in it! He could open the door between the utility room and the rest of the house by jumping up and pressing down on the handle – he was so good at this we had to have two doorstops to keep him in! He would also lick things, paper, bedside lamps that sort of thing and given half a chance he would dip his paw into Sarah’s teacup and drink it by licking if off his paw. And no one could get caught in a vertical blind like the Jubbster! 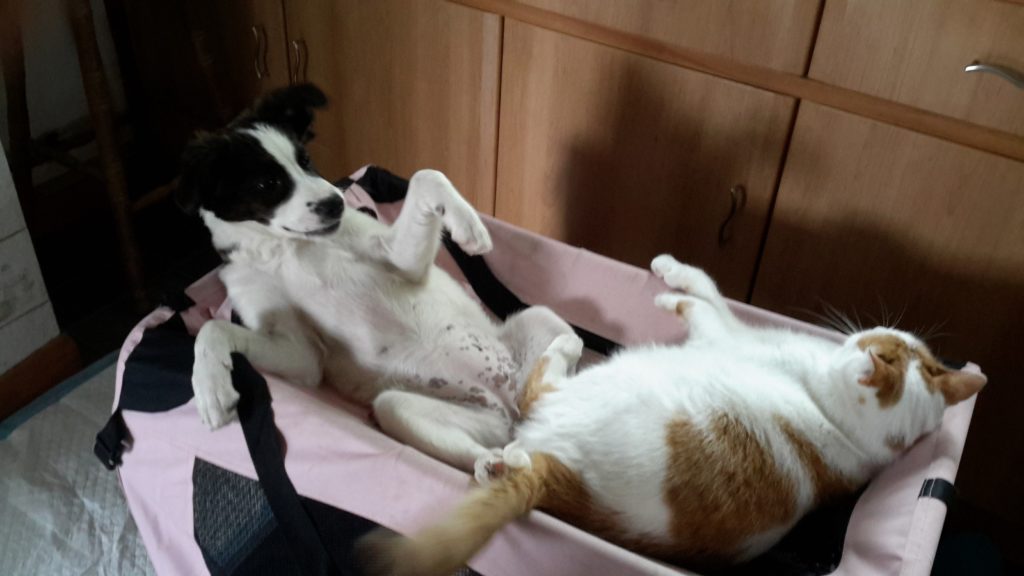 When we first got the dog we actually let them share the kitchen and they got on really well together! Whenever Teddi would try and annoy Jubbs he would just flop over on to his side and swat her away with one of his rear paws, it was such a sight  to see and the poor dog had no idea what to do about it! The dog has different reactions to all of the cats, he dislikes most of them especially the naughty ones like Tag and Louie who she would get very worked up about if they snuck into the living room to steal Jubbly’s food! Diesel she can take or leave but she never quite knew what to make of Jubbs! It didn’t help that when we went away and took the dog Jubby would be in the kitchen and of course that lead to territorial disputes when we came back! 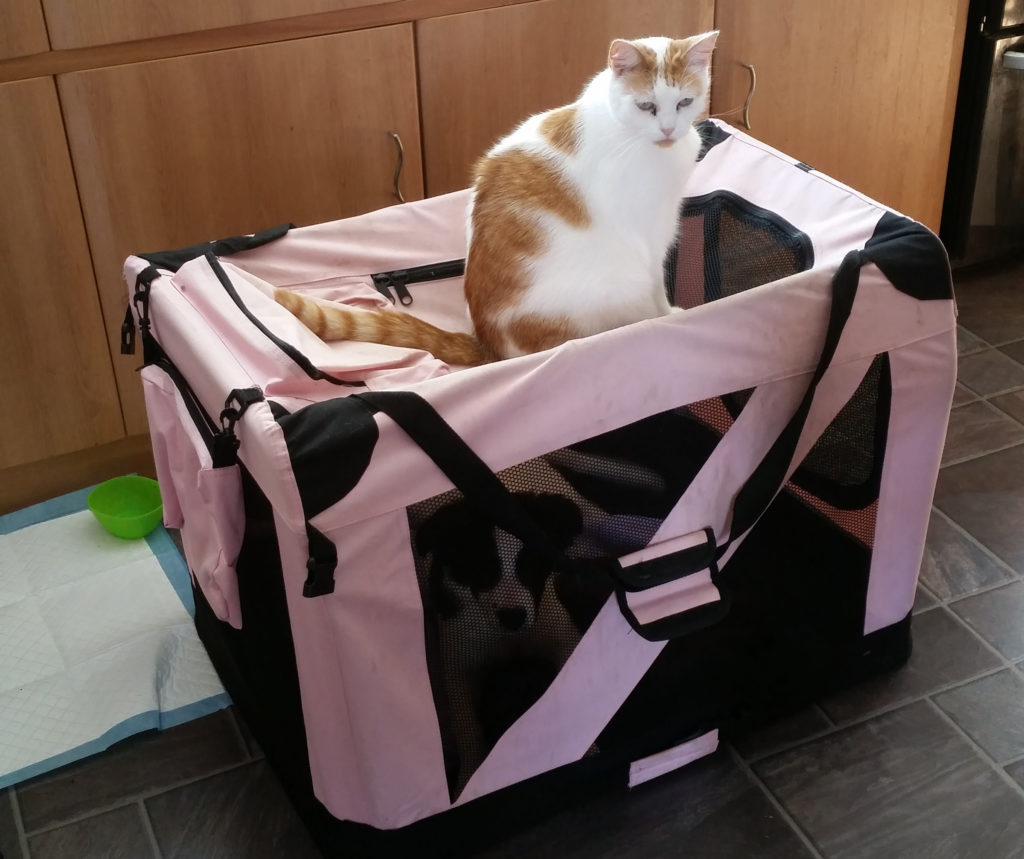 One of his favourite places to sit was on the back on the sofa and he used to get the right hump if one of the other cats had stolen his place. At first he would stare at them and when that didn’t work he would climb into his space next to them and wouldn’t be happy until his had managed to push them out and reclaim that space as his own! He would also like to get comfy on Ben’s bed and we’d often go upstairs and find them fast asleep cuddled up together – it was hard to work out who was looking out for who! 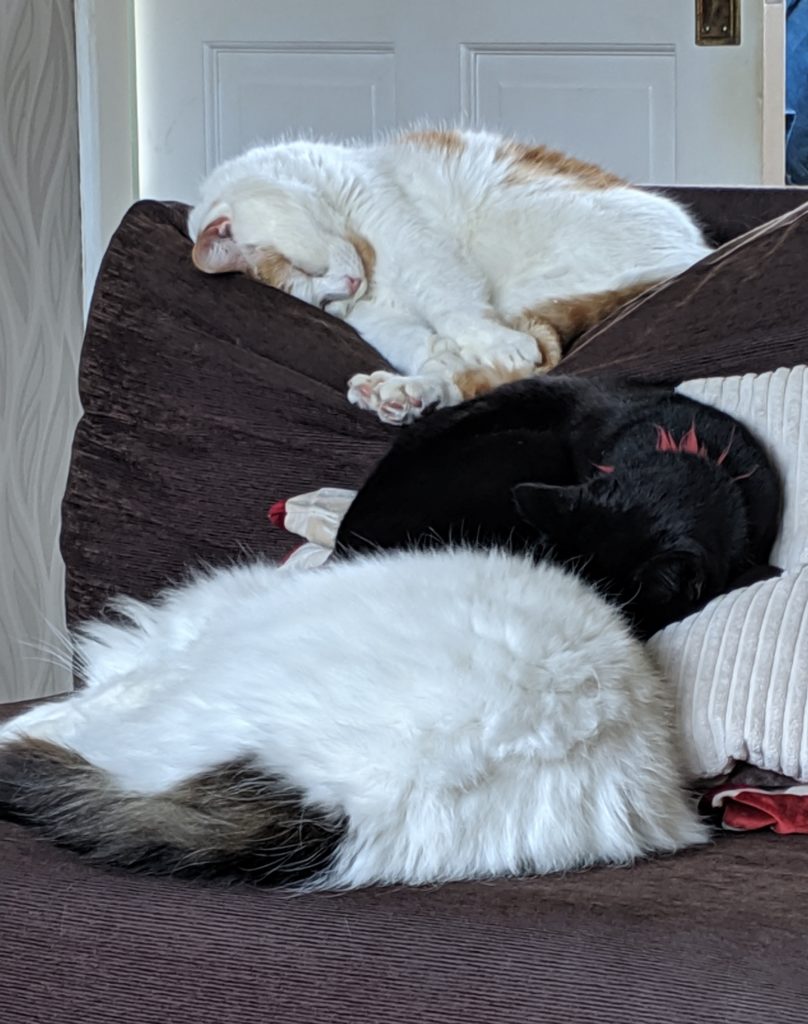 Sadly a few months ago he started to lose weight again but he seemed to be eating ok. When it was obvious that he was losing a lot of weight we took him to the vets. They thought he might have thyroid issues but the blood tests showed he had kidney failure – quite common in older cats but he was only at stage 3 and they thought that with the right treatment he could last another couple of years. We bought him the renal food and some medicine and at first he was eating it without a problem. But as days went on he ate less and less and he seemed to be getting weaker and slower and looking all hunched. He didn’t seem to be able to get warm and was either sitting on the radiator or we had to cover him with a jumper or his particular favourite Sarah’s dressing gown! 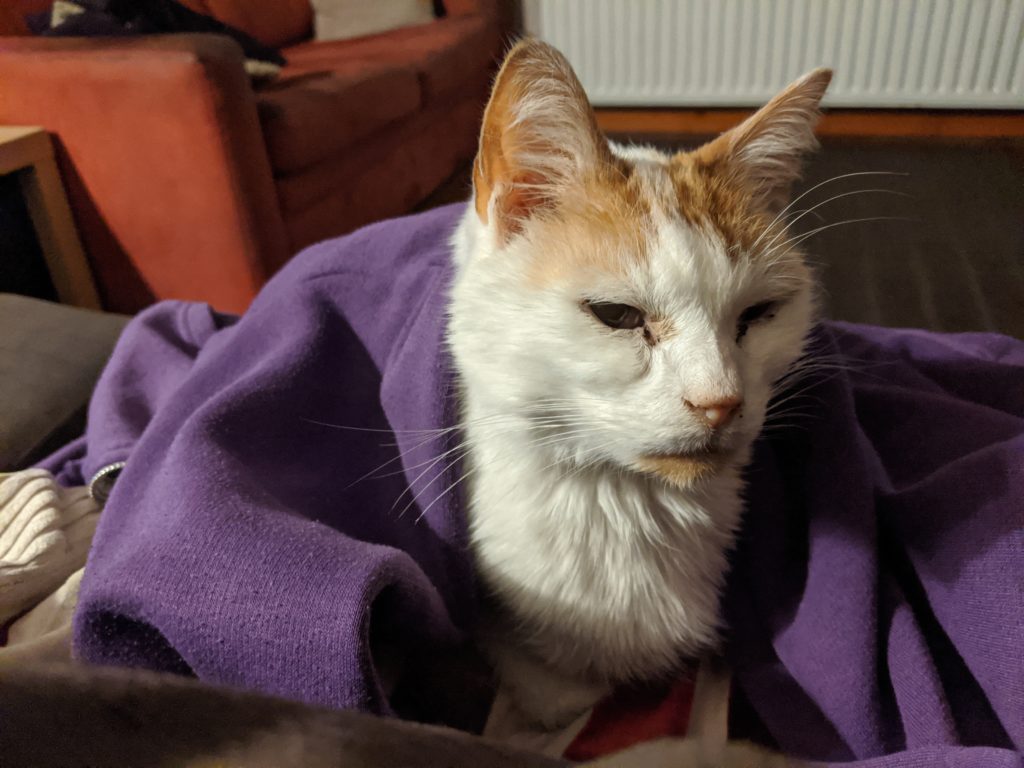 We took him back to the vets who said he was till in stage 3 and they gave us some more medicine. However over the next few days he just went downhill until on the morning of 12th May he could barely stand. We phoned the vets and discussed it and the decision was taken to put him to sleep. We spent the rest of the day making sure he was comfortable and loved before we had to take him on his last journey! By the time we got him to the vets we knew we had made the right decision and when the time came he slipped away without even a whimper. he will be sadly missed and had left a huge whole in our house – I don’t think there will ever be another cat like this crazy dude!

Run free Jubbly – we loved you so much, we will miss you and we’ll always love you xx 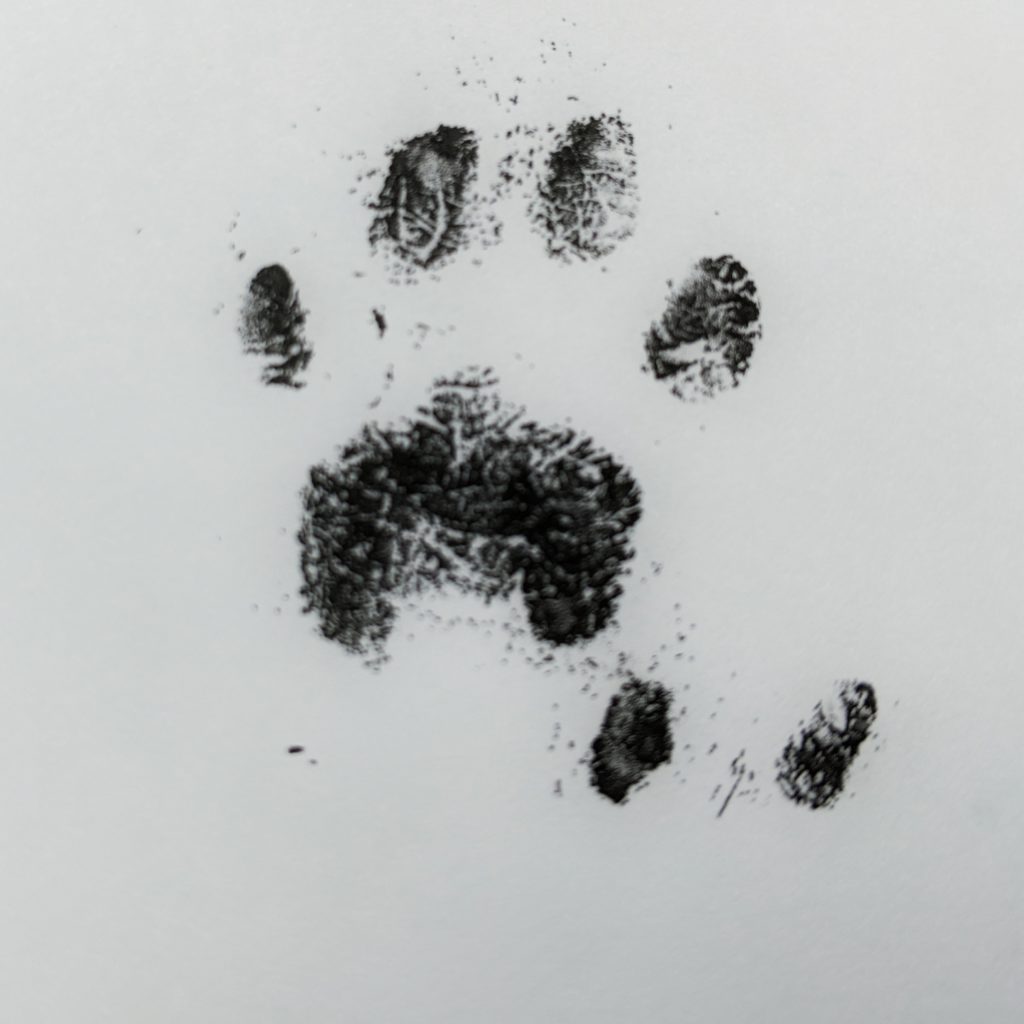