Arnold – the cat who came in from the cold sadly had to be put to sleep last week.

When we used to live down south we had six cats and we would feed them outside on the decking. One evening, much to the consternation of the others, a feral ginger cat with tatty ears turned up. He’d obviously got wind of the food and was hoping to get some for himself. At first he would just sit and watch the others eat, he’d plonk himself down and curl his tail around himself and then put his two front paws on the end of it. I don’t know why but I christened him Arnold. (Ben nicknamed him Bacon Ears) 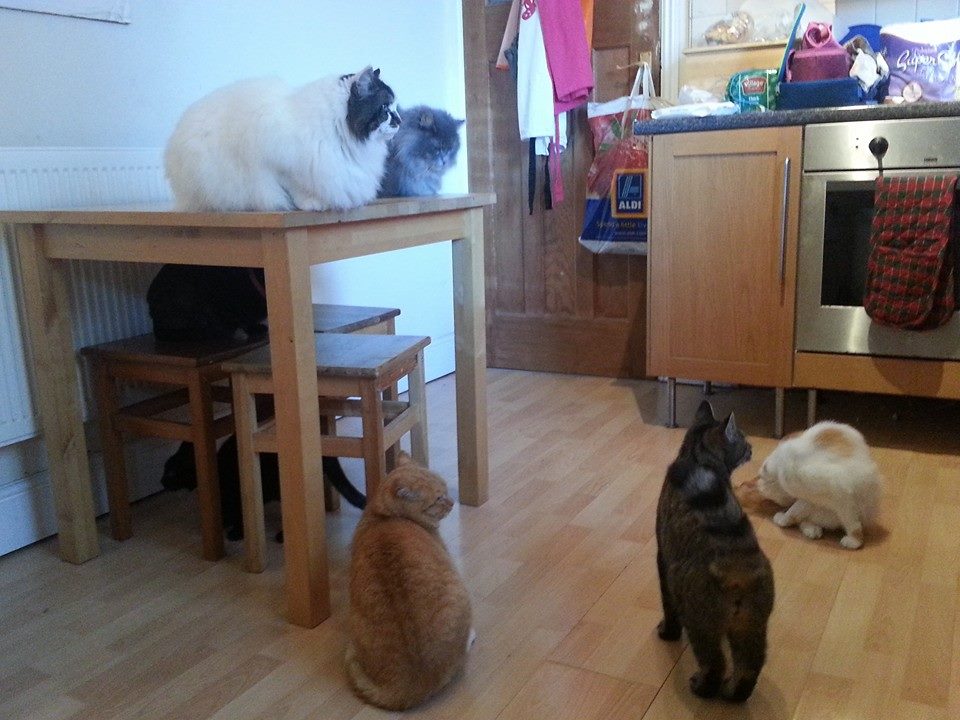 When he kept turning up I tried to make friends with him but it was a slow process. At first any attempt to approach him resulted in him legging it but as time went on he became less wary of me. He still wouldn’t let me touch him though and even after we got to know him better he was still wary of men and would flinch if you put your hand above his head. He clearly had had a rough life and I was honoured that he eventually came to me!

One night we had just gone to bed when we heard a commotion somewhere in the house. It turned out that Arnold had wandered in when the back door was open and made himself comfy somewhere and was now freaking out because the exit route was no longer there. I tried to catch him but that just made him worse until he finally found that the bathroom window was open and climbed out of it! With him sitting on a first floor windowsill we had no idea what to do next but he did! He leapt from the bathroom to the windowsill outside Ben’s room. Then from there he leapt down onto the fence below, it was quite a drop and Sarah and I were almost to scared to look down – but when we did he was ok!

He continued to get braver and would often come into the kitchen, the other cats now tolerated him rather than accepting him. One day I actually managed to pick him up and he let me hold him for a while and this was when I realised that he was actually an Arnold and not an Arnoldina!

At this point we had a problem – we were moving and we weren’t sure what to do with a cat that wasn’t quite ours. Luckily Becky came to his rescue and he went to live, not without putting up a serious fight when they tried to get him into the basket though, in Brighton. Becky and her girlfriend had him for about a year before they split up and then when Becky moved into a place where she couldn’t have pets Arnold went to live with Sarah’s mum. Despite all of her protesting I think she really enjoyed having the little ginger man there!

Earlier this year Becky was finally able to have him back and he went back to Brighton to live with Becky and her new girlfriend. Unfortunately a few weeks ago Becky noticed that he had blood on his nose and after lots of investigations at the vets he was diagnosed with an aggressive form of lymphoma which had spread to his nose and eye sockets. Last Thursday he was really ill and she had to take him to the vets and the decision was made to end his suffering. She waited till the following morning so that her girlfriend could be with her so they could say goodbye to him together.

So poor Arnold crossed the rainbow bridge but at the end of the day he had six years of living the highlife that he probably wouldn’t have had if we all hadn’t taken such a shine to him. Run free little man!